Quackery usually involves integrating metaphysics and such things as sympathetic magic with healing. Often, but not always, the major quality of quackery is fraud and the dispensing of useless or harmful treatments to vulnerable people who are desperate and/or dying. What quackery lacks in scientific study it sometimes makes up for by prescribing generous portions of caring—sometime sincere but often counterfeit—and overdoses of false hope.

If you discover a treatment or product that seems too good to be true, consult this guide to finding pseudoscience, scams, and quack medicine. Remember, it only takes one match on the guide to be considered suspect! 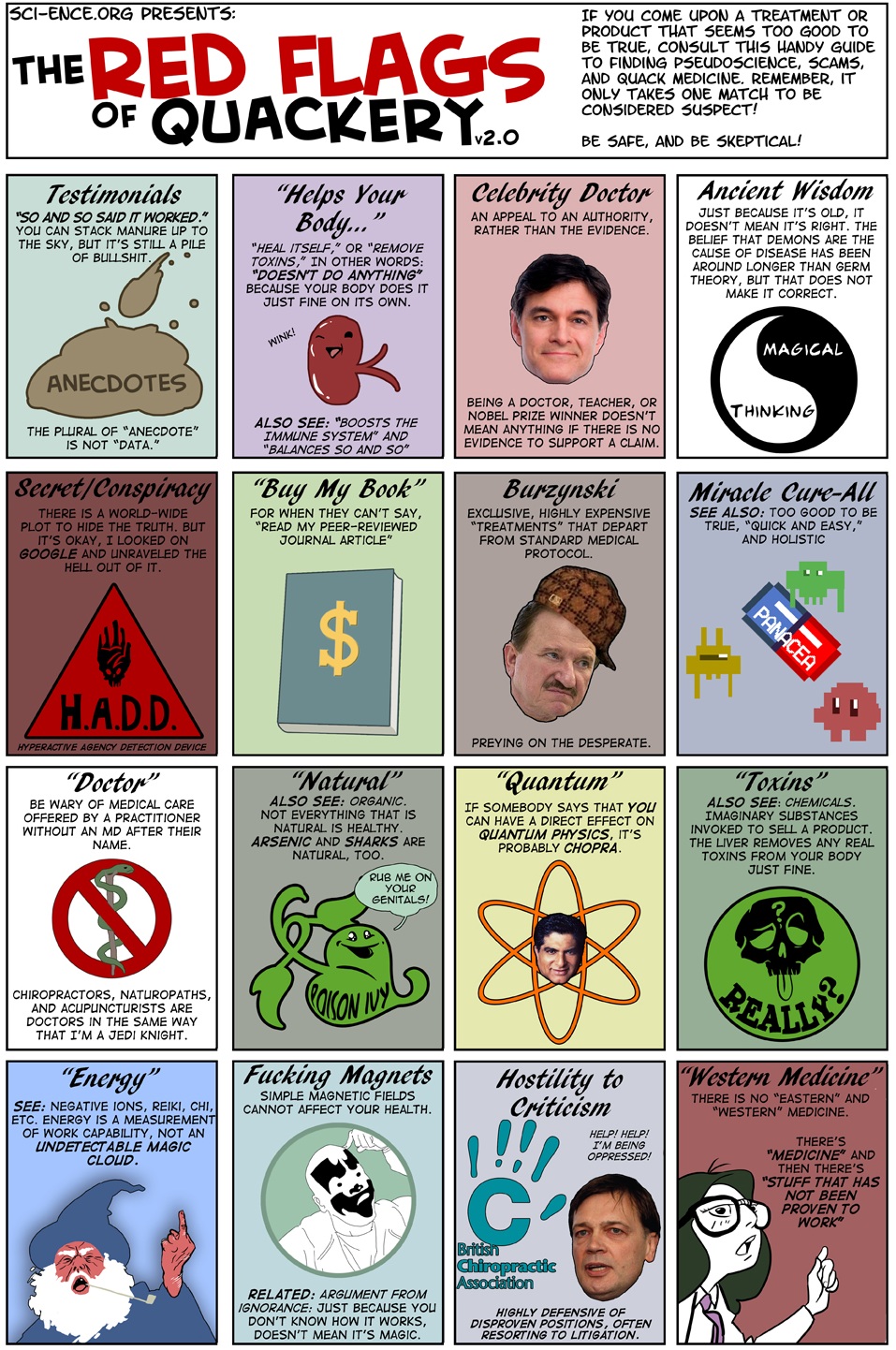 The Red Flags of Quackery

Testimonials:  “So-and-so said it worked.”  You can stack manure up to the sky, and it may look glorious, but it’s still a pile of bullshit.  The plural of anecdote is not data.  Anecdotes should not be accepted as evidence.  Don’t consider “wisdom” from family and friends above actual scientific evidence.

“Helps your body…”… heal itself, remove toxins, boosts immune system, balances so-and-so, etc.  In other words, it doesn’t do anything, because your body does just fine on its own.  There is a delicate balance in our body (homeostasis) and moving the pendulum too far in either direction can have negative consequences.

Celebrity Doctor:  An appeal to authority, rather than the evidence.  Being a doctor, teacher, or Nobel prize winner doesn’t mean anything if there is no evidence to support the claim.  Be sure to question experts who speak outside of their area of expertise:  an astrophysicist shouldn’t make bold claims about cell biology, for example.

Ancient Wisdom:  Just because it’s old, it doesn’t make it right.  The belief that demons are the cause of disease has been around longer than germ theory, but that doesn’t make it correct.  Bloodletting is ancient too, but is useless and dangerous.

Secret/Conspiracy:  There is a world-wide plot to hide the truth, but it’s okay, because I looked on Google and unraveled the hell out of it.  “They” don’t want you to know this secret because it will cut into “their” profits (where “their” = big pharma, big agriculture, the government, the medical industry, NASA, or some other big institution).

“Buy My Book”:  For when they can’t say, “Read my peer-reviewed journal article.”. Check to see if there’s money to be made.  Pseudo-scientists don’t work for free either.

Special “Treatments”:  Exclusive, highly expensive, exclusive “treatments” that depart from standard medical protocol.  Practitioners are often charlatans (a person falsely claiming to have a special knowledge or skill; basically a fraud) and typically prey on the desperate.

Miracle Cure-All:  See also:  Too good to be true, Quick and Easy, and Holistic.  Miracle cures will give you energy, cure cancer, bladder infections, arthritis, diabetes, and more!  Or none of them.  Homeopathic practitioners, believe homeopathic solutions can cure just about anything from Parkinson’s Disease to impotence to depression to acne to migraines to excessive sweating… the list goes on and on.  These claims don’t change the fact that homeopathy lacks quality evidence proving its efficacy (never mind the fact that it’s implausible).

“Doctor”, but not really:  Be wary of any medical care offered by a practitioner without an MD after their name.  Chiropractors, naturopaths, and acupuncturists are doctors in the same way that I am a Jedi Knight.  There’s a reason why medical doctors require 7+ years of post secondary education and practical work and don’t earn their degrees online.

“Natural”:  Also see: Organic.  Not everything that is natural is healthy.  Arsenic, cyanide, and even sharks are natural too!

“Quantum”:  If somebody says that you can have a direct effect on quantum physics, they clearly don’t understand quantum physics and they are probably named Deepak Chopra.

“Toxins”:  Also see:  chemicals.  Imaginary substances invoked to sell a product.  The liver removes any real toxins from your body just fine.  Also, literally everything is made of chemicals, despite what the Food Babe might tell you.  Not all are bad even if you can’t spell them or pronounce them.  Not even dihydrogen monoxide.

Magnets:  Simple magnetic fields cannot affect your health.  Similar to… the argument from ignorance:  just because you don’t know how it works, doesn’t mean it’s magic.  Really strong, targeted electromagnets can affect your brain in very interesting ways for a short time, however.

Hostility to Criticism:  Highly defensive of disproven positions, often resorting to litigation. Practitioners of sketchy treatments will often be very defensive of their work.  For example, Andrew Wakefield and the anti-vaccination movement.

“Western Medicine”:  There is no “eastern” and “western” medicine.  There’s “medicine” and then there’s “the stuff that has not been proven to work.”  There is, however, “northern” and “southern” medicine (no, there isn’t).

To learn more about cranks, quacks, and bad medicine, take a listen to the Quackcast podcast, or read through the Science Based Medicine blog.  Or you could venture further down in the maze on this site.  Whatever you choose, be ware of claims, because, after all…