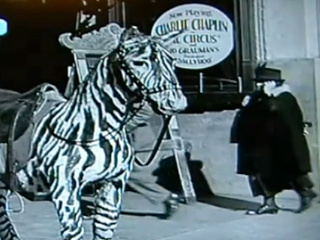 A filmmaker by the name of George Clarke is claiming that an extra in Charlie Chaplin’s “The Circus” is talking on a cell phone. The film was released in the 1920s. Looking at the picture, and at the video (which has over 3 million views already), Clarke has come to the conclusion that the person must be a time traveler.

He’s screened it in front of about 100 people, and no one can give an explanation. “I want to try to get this out there, because right now the only conclusion is … a time traveler.” Clarke says in the video.

The time traveling woman in the film appears in a bonus scene included on the DVD release of “The Circus,” a 1928 silent film starring Charlie Chaplin. The footage itself is from 1923. The woman is shown outside Mann’s Chinese Theater in Hollywood where the film premiered. She does appear to have something in her hand… but what is it?

For the sake of argument (sigh…), let’s assume it is a cell phone. How could she actually be using it? What about the network towers, satellites, and infrastructure required to operate a cell phone network? I guess those would have to have traveled with her through time.

What a fitting time to invoke Occam’s Razor – the theory that says (in a nutshell) that the simplest solution is, more often than not, the correct solution. So is it a time traveling woman from the future, or a something much simpler? It is a massive leap to think that the woman is time traveling.

I’ll give Clarke the final word on this one though, as it’s a fitting quote for the conspiracy buffs out there… “I’m hearing from a lot of ex-government officials, men 70-odd years of age, who tell me about secret government operations.”