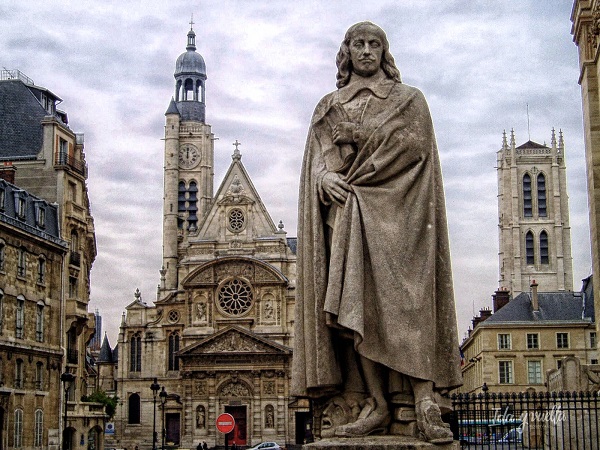 You are probably reading this article online. In that case, you may not know it but you have a seventeenth-century Frenchman to thank for this experience. Blaise Pascal may not have known anything about the internet, but it is thanks, in no small part, to his precocious genius that we are able to do what we do online. Pascal’s experiments with practical mathematics underpin much of the coding that we take for granted today – that’s why Swiss computer pioneer Niklaus Wirth called his early coding language Pascal. And this mastermind’s contribution to coding is only the start of his incredible contribution to what we call modern life.

So just exactly who was Blaise Pascal? He may sound like a bad 1970s TV character, but he is someone who really ought to be more widely recognised outside his native land. Never mind twentieth century TV, Pascal deserves to be mentioned in the same breath as the likes of Leonardo da Vinci and the great 11th century Chinese polymath Su Song. Mathematician, theologian, physicist, medical pioneer and author, the list of Pascal’s inventions and achievements is seriously impressive. And it is all the more impressive because at first his talents were actively suppressed by his father.

Pascal was born on June 19, 1623, in Clermont-Ferrand, provincial France. His mother died during his infancy and he was raised by his over-protective father. Pascal was, it seems, a sickly child and in order to protect his delicate health his father – a sometime judge and tax inspector – decided that his son should be home educated and, moreover, shielded from the rigors of mathematics until he was 15. Fortunately for mathematics, the young Pascal was having none of that.

By the time he was 15 years old, Pascal had worked out the rudiments of geometry  – actually inventing his own terms – as he quickly caught up with the insights of the likes of Euclid on the basis of nothing but his own natural genius. By the time he was 16, the young prodigy had completely overcome his father’s objections and was presenting his discoveries to the leading mathematicians of the day. Amongst his insights was the breakthrough calculation now recognized as the Mystic Hexagram. A year later, his ground-breaking Essay on Conic Sections was published. He was only 17.

Aside from the computer coding language that bears his name, perhaps the most glamorous and easily recognizable aspect of Pascal’s legacy is the roulette wheel. The wheel itself derived from Pascal’s attempts to design a perpetual motion machine. The frictionless mechanism of the wheel is the perfect testament of Pascal’s keenness to translate his mathematical theorizing into tangible, practical devices. He might have failed to create perpetual motion, but the roulette eventually became a great hit a couple of centuries later, first in Europe and then all over the world.

Had he been around today, Pascal would no doubt be running his own online casino or even playing poker professionally. The mathematical calculations of probability that operators of casino games of chance work to were – of course – in large part first established by-you-know-who.

The odds that determine the various bets that are available in roulette may now appear to be a straightforward matter of mathematic probability. But it is only thanks to the work of Pascal – along with the perhaps more famous Pierre de Fermat – that we have such a grasp of probability theory at all. In other words, it is not just the iconic roulette wheel that we owe to Pascal, it is the entire idea that within a fixed set of mathematical parameters, we can calculate the likelihood of future events. That is to say, Pascal and Fermat laid the foundations for all casino gambling, all bookmaking and a great deal of the predictive logic which underpins corporate planning – and especially the insurance industry. 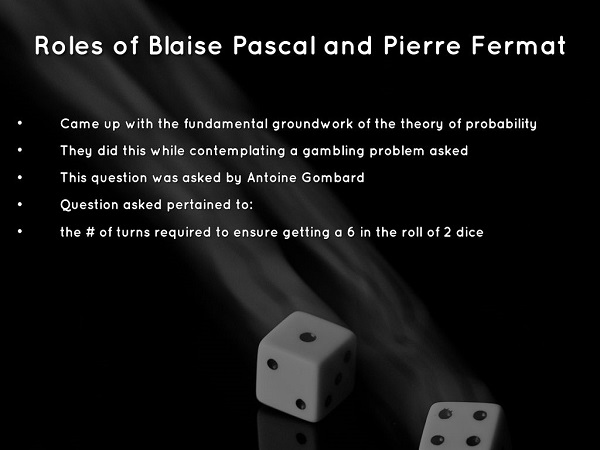 A fundamentally practical man, Pascal was always intent on breathing life into his theoretical calculations. The perpetual motion machine may never have been fully realized, but his experiments with calculating machines were genuinely groundbreaking. It is on the basis of his calculating machine – which he called the Pascaline – that Pascal’s name was still resonating in the 1960s, back when Niklaus Wirth was looking for a suitable name for his coding language. 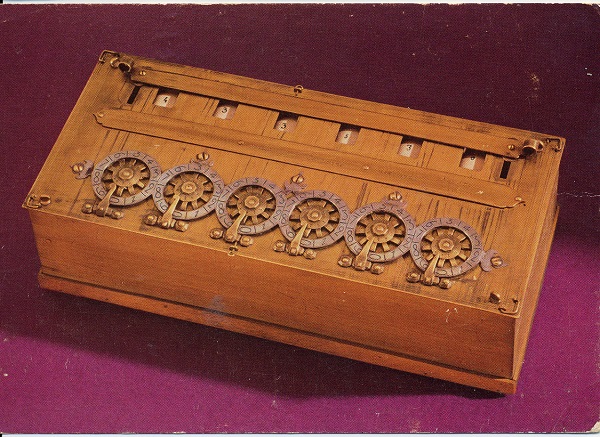 The Pascaline was a precursor to Charles Babbage’s calculating machine by almost 200 years. Admittedly it was not entirely perfect, something which no doubt irked the fastidious Pascal to no end, but it was nonetheless a hugely significant as well as impressive engineering and mathematical feat. For example, unlike Babbage’s giant machinery, Pascal’s machine was readily portable by hand. Over the course of serial attempts to perfect his invention, Pascal produced around 50 different versions, a few of which survive to this day.

The most testing problem which the machine was designed to cope with – over and above the most basic mathematical functions of adding and subtracting decimals (base ten) – was the idiosyncratic arrangement of the French currency at the time which was made up of sols, livres and deniers: there were 20 sols in a livre and 12 deniers in a sol. Being able to reliably converts 20s into 12s, and 12s into 1s was itself a formidable mathematical challenge. For the son of a tax inspector, such problems were deeply significant.

Pascal’s achievements were not confined to his mathematical accomplishments in any way. In 1646, following a near-death experience, he is said to have experienced a powerful religious awakening which led to him developing a typically insightful career as a religious theologian. One of his more lasting logical observations was what has become known as ‘Pascal’s wager’. The argument was that since it is impossible to prove whether or not God exists, that one should believe in him anyway, since if he does exist this is clearly the more sensible approach, and if he does not exist nothing has been lost. Seemingly impervious to cognitive bias of any sort, Pascal’s considerable body of religious thinking was published in the now famous Pensées (thoughts).

Computers (in more than 20 years of history), barometers, probability theory, casinos and an unshakable argument for believing in God: Pascal left us quite a legacy. Never a man of good health, Pascal died from stomach cancer in Paris on August 19, 1662. He was only 39 years old. There’s no way to even imagine what else this brilliant man could have come up with were he alive for longer.