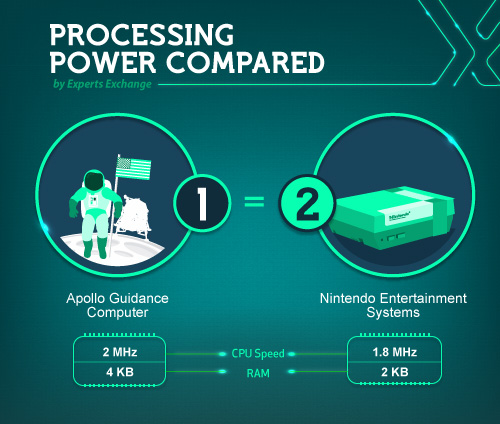 This article is a significant update to a version written in 2012.  It has been edited to include new articles, ads, some nostalgic games, reviews, and technology from 1995.  It’s also been updated with 2015 numbers, where applicable.  If you liked the first version, you’ll probably like this one too.

I recently stumbled upon a computer science project I did in high school (back in 1995) entitled “Technology in Society”. We were tasked with finding newspaper articles that demonstrated technology in various work spaces. Discovering a gem like this – especially after two decades have passed – is eye opening and mind boggling.

Reading through it, I drifted back to my teenage years and recalled my earliest experiences with a PC: the excitement and surprise when reading through Compton’s Encyclopedia; playing DOOM and Wolfenstein with a newly installed sound card; and browsing a primitive Web 1.0 Internet on Netscape Navigator. These experiences would form the foundation for my future career in the online, interactive space.

To get this started, this is what the homepage of CNN.com looked like in 1995: 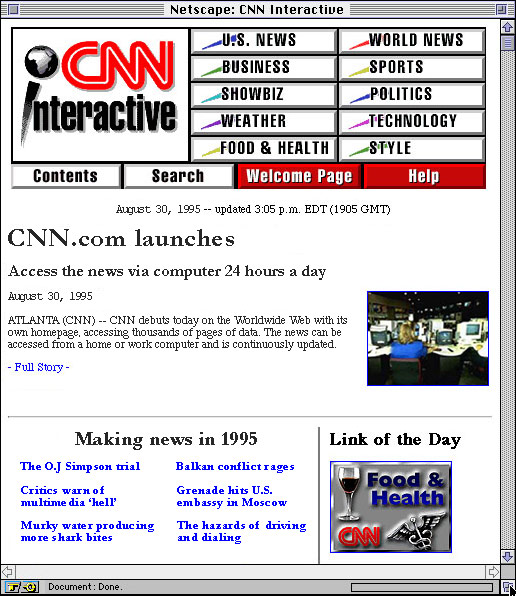 Home computing has come a very long way, and so I thought I’d share a few of the articles from that 1995 project.

The first article article, written by Paul De Groot and published in 1995 in the Montreal Gazette, went as follows:

Here’s the Fall ’95 version of a basic computer 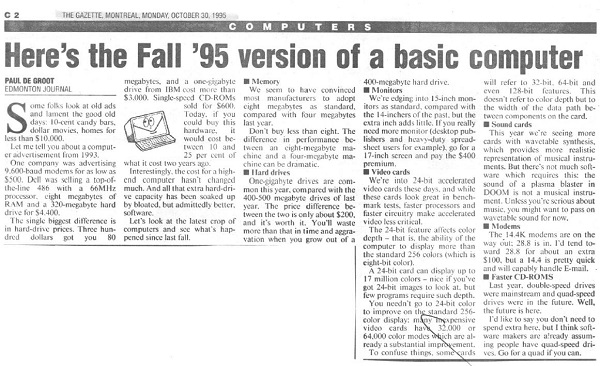 Let me tell you about a computer advertisement from 1993.

The single biggest difference is in the hard drive prices. Three hundred dollars got you 80 megabytes, and a one-gigabyte drive from IBM cost more than $3,000. Single speed CD-ROMs sold for $600. Today, if you could buy this hardware, it would cost between 10 and 25% of what it cost two years ago.

Let’s look at the latest crop of computers and see what’s happened since last fall.

Hard Drives: One-gigabyte hard drives are common this year, compared with the 400-500 megabyte drives of 1994. The price difference between the two is only about $200, and it’s worth it.

Monitors: In 1995, we’re edging into 15-inch monitors as standard, compared with the 14-inchers of the past, but the extra inch adds little. If you really need more monitor, go for a 17-inch screen and pay the $400 premium.

Video: We’re into 24-bit accelerated video cards these days, and while these cards look great in benchmark tests, faster processors and faster circuitry make accelerated video less critical. The 24-bit feature affects color depth – that is, the ability of the computer to display more than 256 colors (which is eight-bit color). A 24-bit card can display up to 17 million colors – nice if you’ve got 24-bit images to look at, but few programs require such depth. You needn’t go to 24-bit color to improve on the standard 256-color display: many inexpensive video cards have 32,000 or 64,000 color modes which are already a substantial improvement.

Sound cards: In 1995, we’re seeing more cards with wavetable synthesis, which provides more realistic representation of musical instruments. But there’s not much software which requires this: the sound of a plasma blaster in DOOM is not a musical instrument. Unless you’re serious about music, you might want to pass on wavetable sound for now.

A Lot Can Change in 20 Years

Here’s another article in a similar vein (still part of the same project!).

“Yanks big on home tech”, by David Jundson, 1995 in the Montreal Gazette. 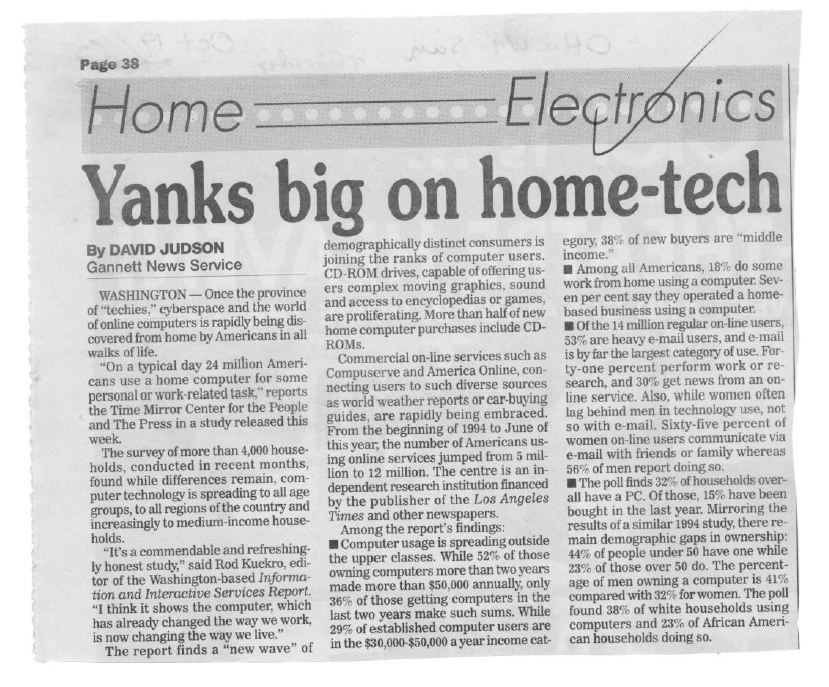 On a typical day, 24 million Americans use a home computer for some personal or work related task,” reports the Time Mirror Center for the People and The Press in a study. The report found a “new wave” of demographically distinct consumers is joining the ranks of computer users. CD-ROM drives, capable of offering users moving graphics, sound, and access to encyclopedias or games, are proliferating. More than half of new home computer purchases include CD-ROMS.

Commercial on-line services such as Compuserve and America Online, connecting users to such diverse sources as world weather reports or car-buying guides, are rapidly being embraced. From the beginning of 1994 to June of 1995, the number of Americans using online services jumped from 5 million to 12 million.

Of the 14 million regular on-line users, 53% are heavy email users, and email is by far the largest category of use. 41% perform work or research, and 30% get news from an on-line service. Also, while women often lag behind men in technology use, not so with email. 65% of women on-line users communicate via email with friends or family, whereas 56% of men report doing so.

To compare with today’s numbers…

Globally in 2015, roughly 3 billion people on Earth now use the Internet.  Let’s put that in perspective for a moment.

There are 1.2 billion Catholics and 1.6 billion Muslims in the world, totaling 2.8 billion. There are more people using the internet since the 1990’s than there are Catholics and Muslims combined – and they’ve had thousands of years to grow their numbers. 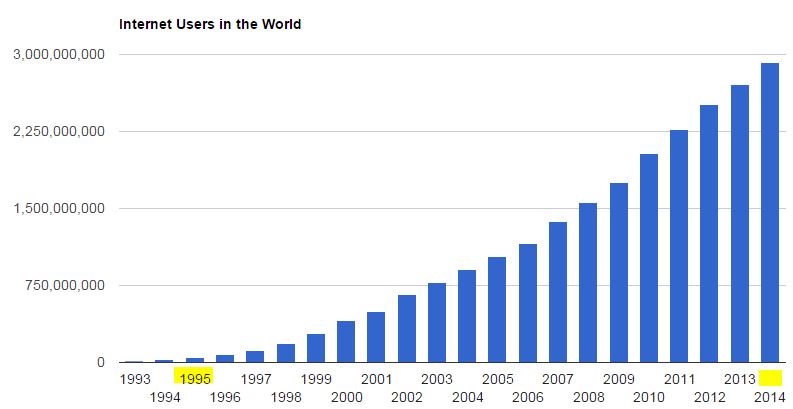 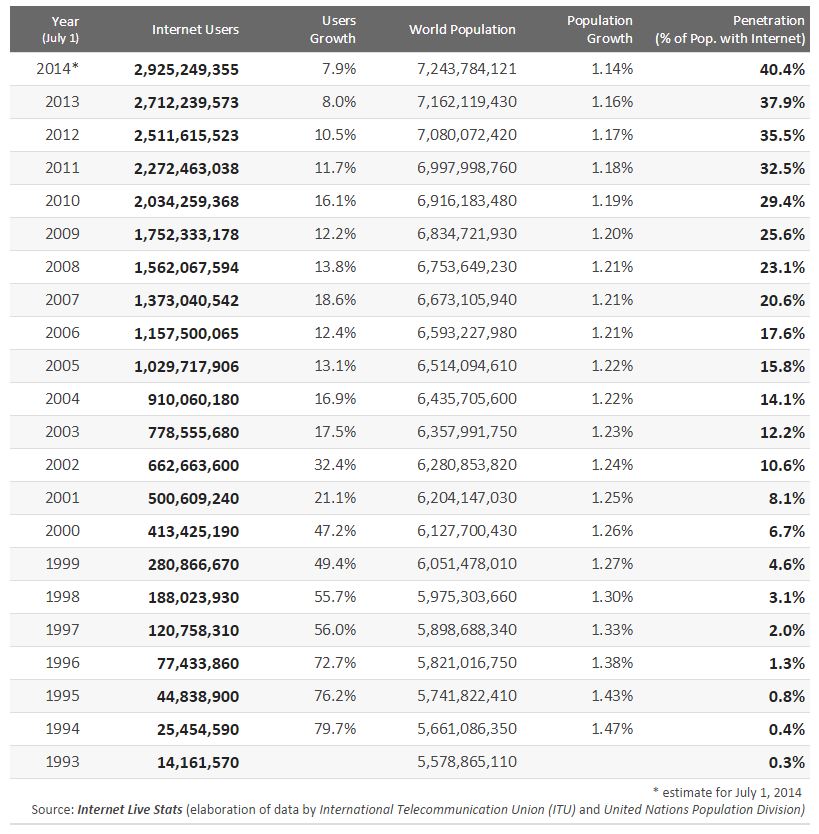 Windows:  Pretty Slick for Its Time

On August 24th, 1995, Microsoft launched Windows 95.  Personally, it was a big day for me.  I went from Windows 3.1 and upgraded to the Windows 95.  The Start button introduced itself, and is still (by most accounts) popular today.  You could have long file names, which was a godsend.  Graphically, it was fairly intuitive, and looked pretty good.

You could install Windows 95 from just thirteen 1.68MB floppy disks. The ISO for Windows 10 is nearly 4GB. 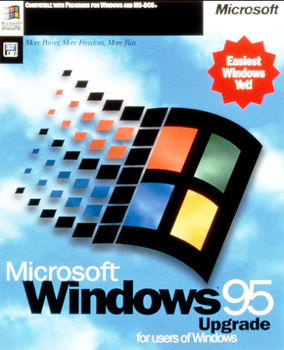 According to PC Gamer, the “advanced features of Windows 95 will meant companies providing services via the MS Network could bring visual style into the online equation.”  Sure thing. 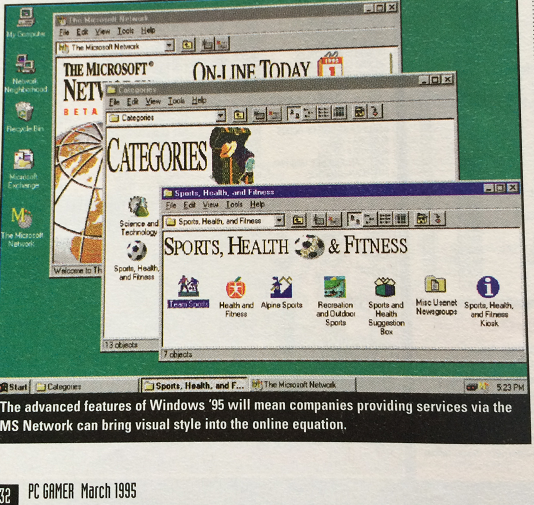 I Am A Nostalgic Geek:  Here’s my 1st PC

I remember my first computer well… It was an IBM Ambra, with a 25MHz processor, 4MB of RAM and a 220 Megabyte hard drive. There was no sound, no video card, and no CD-ROM. Later, we upgraded to 8MB of RAM for $450, and then added a sound card and CD-ROM “multimedia package” for about $600.

Now, I use a desktop, laptop and iPhone 6s, iPad (and iPad Mini), PlayStation 3, and a couple of old server PCs (all of which are vastly more powerful than that machine from 1995). Plus, I use several cloud based applications for online storage. They’re all interconnected and used on a regular basis.

Speaking of portable storage, you don’t even have to go as far back as 1995 to see dramatic changes in size and price.  Portable flash cards have increased in size by orders of magnitude and have dropped in price by the same. A 128 Gb card today costs around $50, or roughly $0.39 per gig.  A card with 128MB capacity cost roughly $30 in 2005… which works out to $234 per gig. 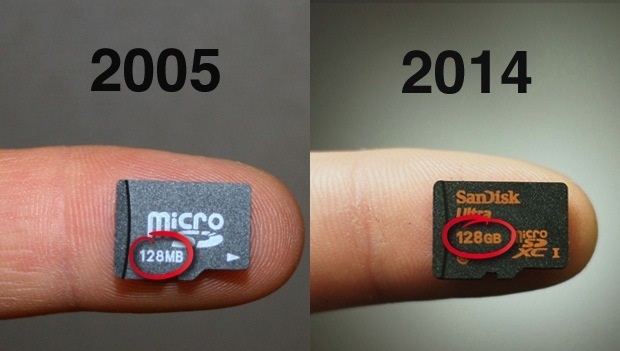 Fortunately, I also kept (and found) a piece of my gaming history as well:  copies of of the May, 1995 PC Gamer (featuring Aliens and X-COM:  Terror from the Deep) and July, 1995 Computer Gaming World (featuring MechWarrior 2 and a sneak preview of Duke Nukem 3D). 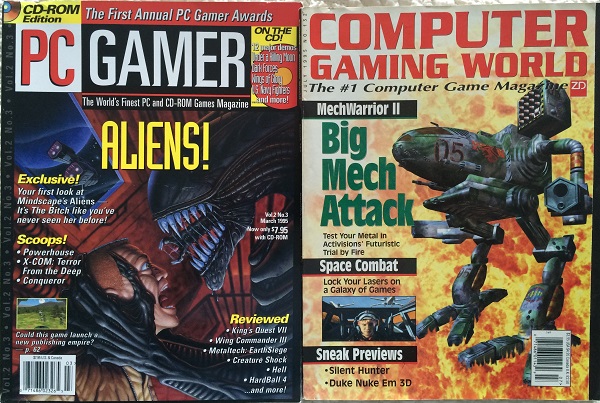 The most popular games in May of 1995 were Panzer General, Dark Forces, and X-COM: Terror From The Deep.  Take a look at the gaming studios associated with the Top 10 – how many remain today?  How many of these games did you score from now defunct “warez” sites? 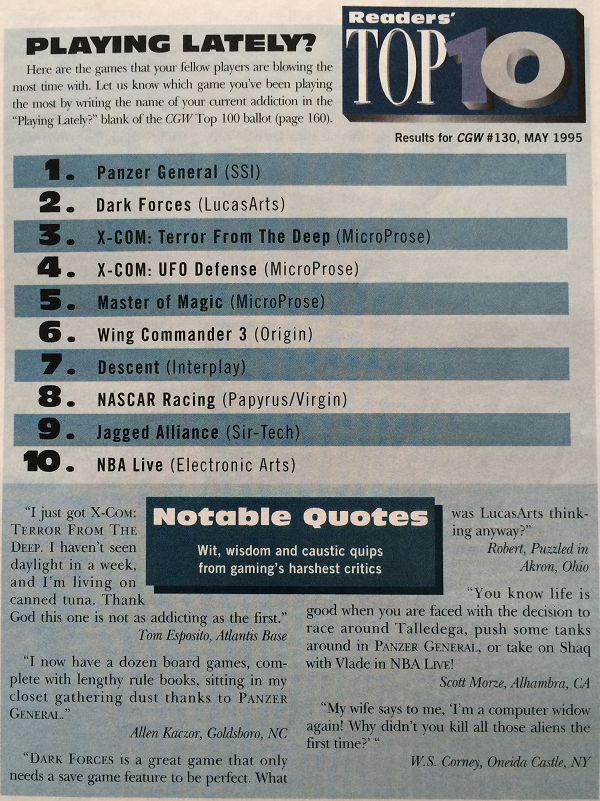 And then, a full page review in PC Gamer for the original Warcraft by Blizzard Entertainment.  It was rated as an Editor’s Choice (good call), and, “mixes action and strategy in a brew so addictive it should come with a warning label.”.

The requirements for the game were a 386/ 25MHz; CD-ROM drive; 4MB of RAM; 2MB of hard drive space; VGA; and a mouse.  But for the best experience, PC Gamer recommended a 486SX/25 MGz with a compatible sound card.  Amazing – can you imagine listing a “mouse” or “sound card” as a requirement?

Warcraft would become one of Blizzard’s most successful franchises, followed by sequels, character spin-offs for use in other Blizzard games like Hearthstone and Heroes of the Storm, and would become the universe and framework for most successful MMO ever, World of Warcraft.  The franchise would even boast a full length movie (due out in 2016), titled appropriately, “Warcraft“. 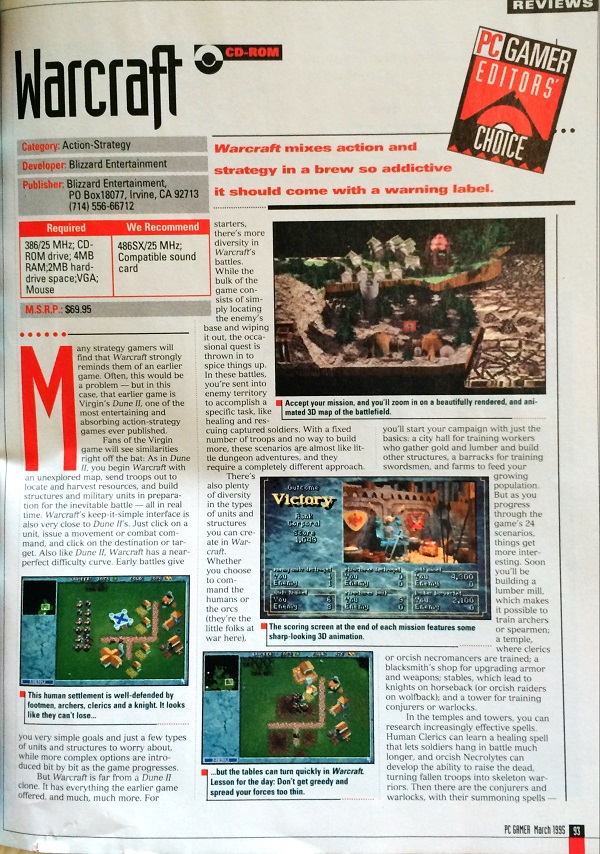 I jumped on the Wacraft bandwagon when Warcraft 2: Tides of Darkness was released.  At the time, I was still enthralled with Doom, Heretic, Hexen, and Wolfenstein.  Speaking of Wolfenstein…  the graphics have improved by such a large margin that they are almost incomparable. 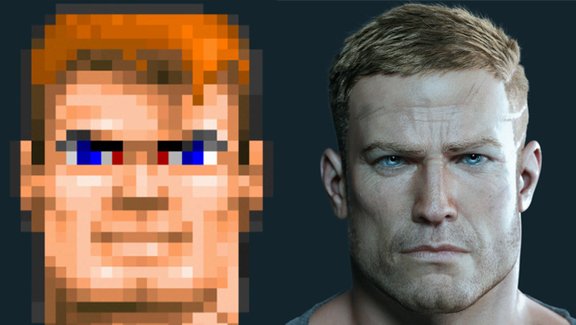 In 2015, we boast about the quality of VR peripherals like Oculus Rift.  When its development kit was made public, the results were astonishing.  It felt like VR really was close this time… and sure enough, it’s scheduled to launch in 2016 and is already miles ahead of the orginal version.

But before Oculus Rift, there was “i-glasses!‘, back in 1995.  Heck, back then, if I had two heads, I’d buy one for each!  The magazine was bold enough to say that PC gaming should get ready for virtual reality because it was around the corner and that “PC gaming may never be the same.”.  It feels like until a couple of years a go, and nearly two decades later, you could say the same thing and still be correct.  This time… this time… it feels like virtual reality really is just around the corner. 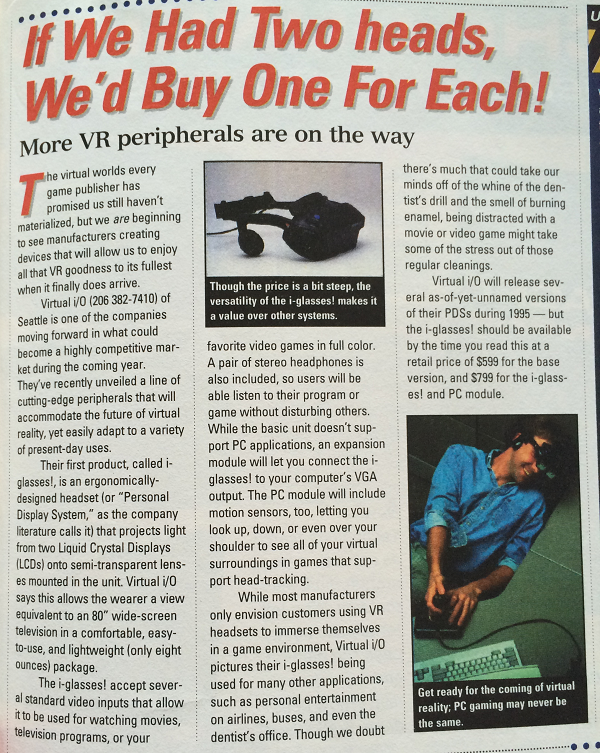 The Apollo Guidance Computer clocked in a 2 MHz and had 4 KB of RAM.  A Nintendo Entertainment System clocked in at 1.8 MHz with 2 KB of RAM.  That means we could combine two NESs and you’d equal the processing power to get to the moon (admittedly, this is a gross simplification).

I’m excited to see where we’ll go from here.  How will it affect gaming and the entertainment industry as a whole?  Will peripheral devices supporting virtual reality finally take off?  What world problems will we be able to solve, and at what cost?

Do you remember your  first computer?  What games did you play?  What do you miss?