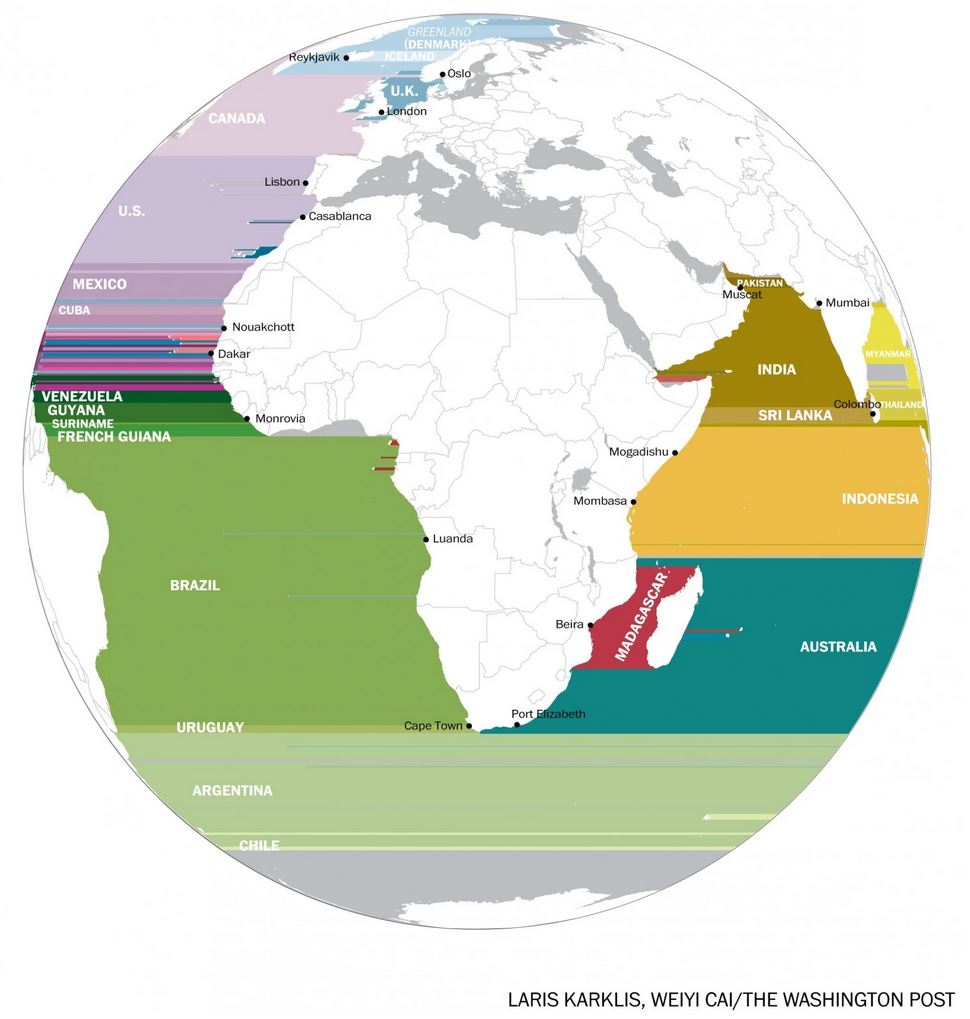 Ever sit on the beach and wonder… if you could sail straight out, where would you end up?  The following maps show the cities and countries that are at the same latitude across the ocean, for anywhere in the world.

The map below shows the Western Hemisphere. The colored bands on the right side show European countries in blue and African countries in red. You can see that Africa is huge, and Europe is a lot farther north than you might think.  Notice the band for the Western Sahara – which is in-line with Miami and Cuba (doesn’t it feel like the Sahara should be much further south?).

On the left of the globe, Asian countries are shown in yellow, while the countries in Oceania are below them in blue. Australia ends up about on par with Buenos Aires. (Note that none of these maps provide an exhaustive list of the world’s countries). 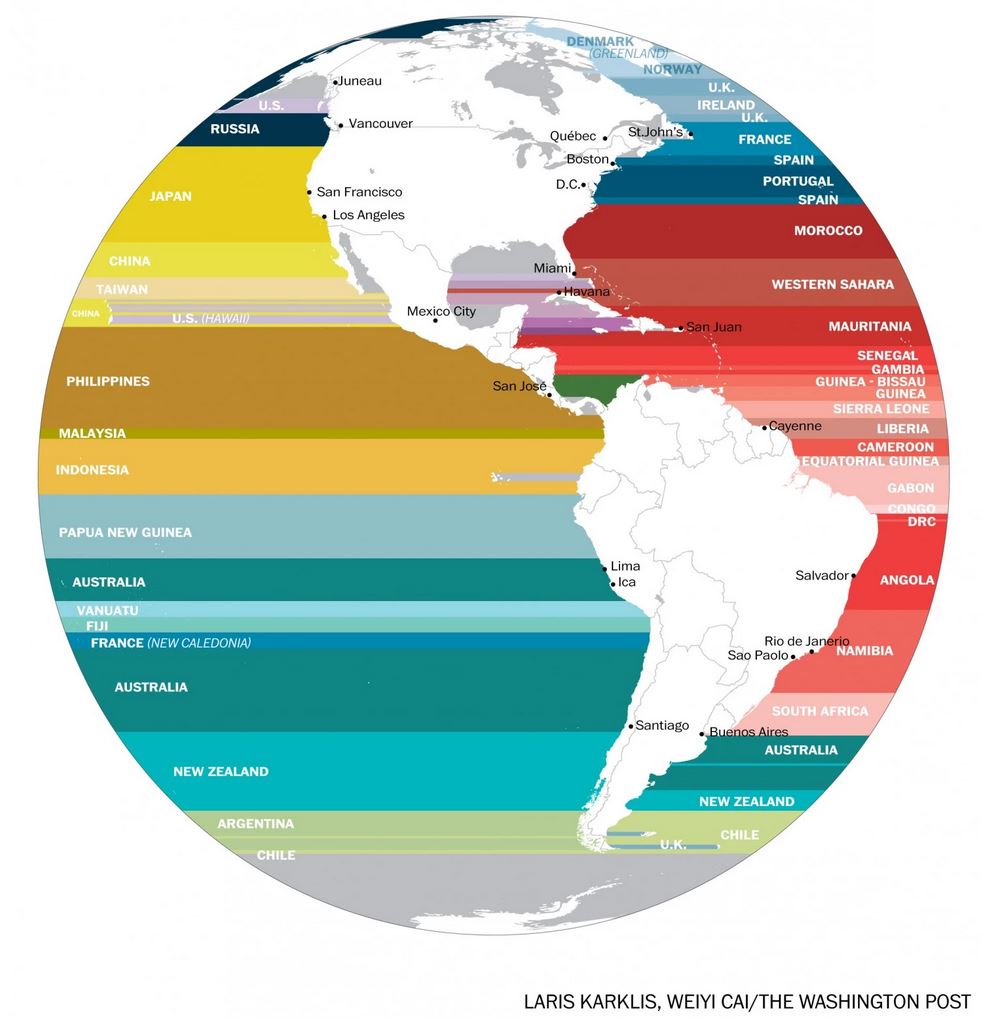 The map below zooms in on the East Coast and adds some global cities for perspective.  Paris, Milan, and Madrid “feel” like they should be further south, but in truth, they are near the same latitude as Québec City, Boston, and New York. 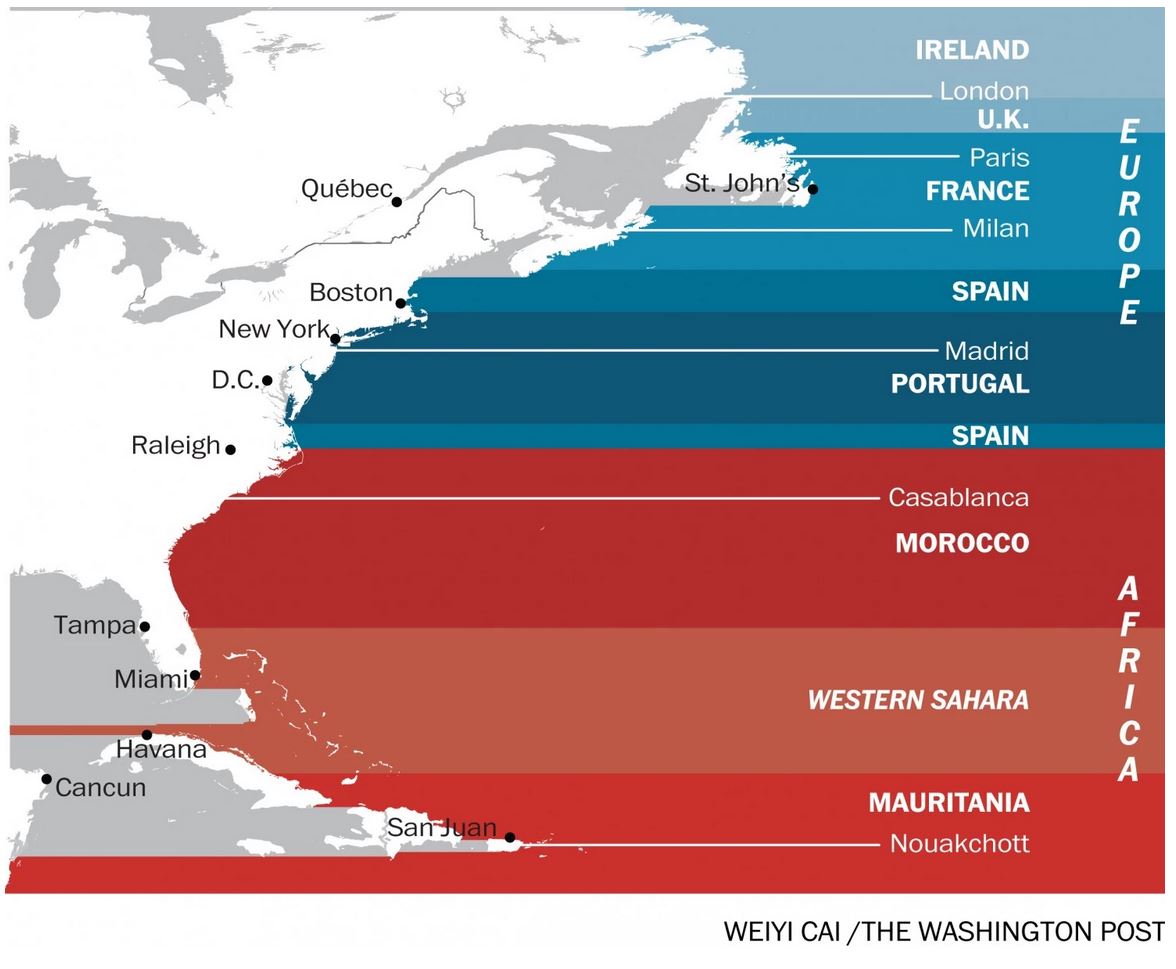 Below is the same map for the West Coast.  Note how Japan and China make up the vast majority of the coast (not Russia). 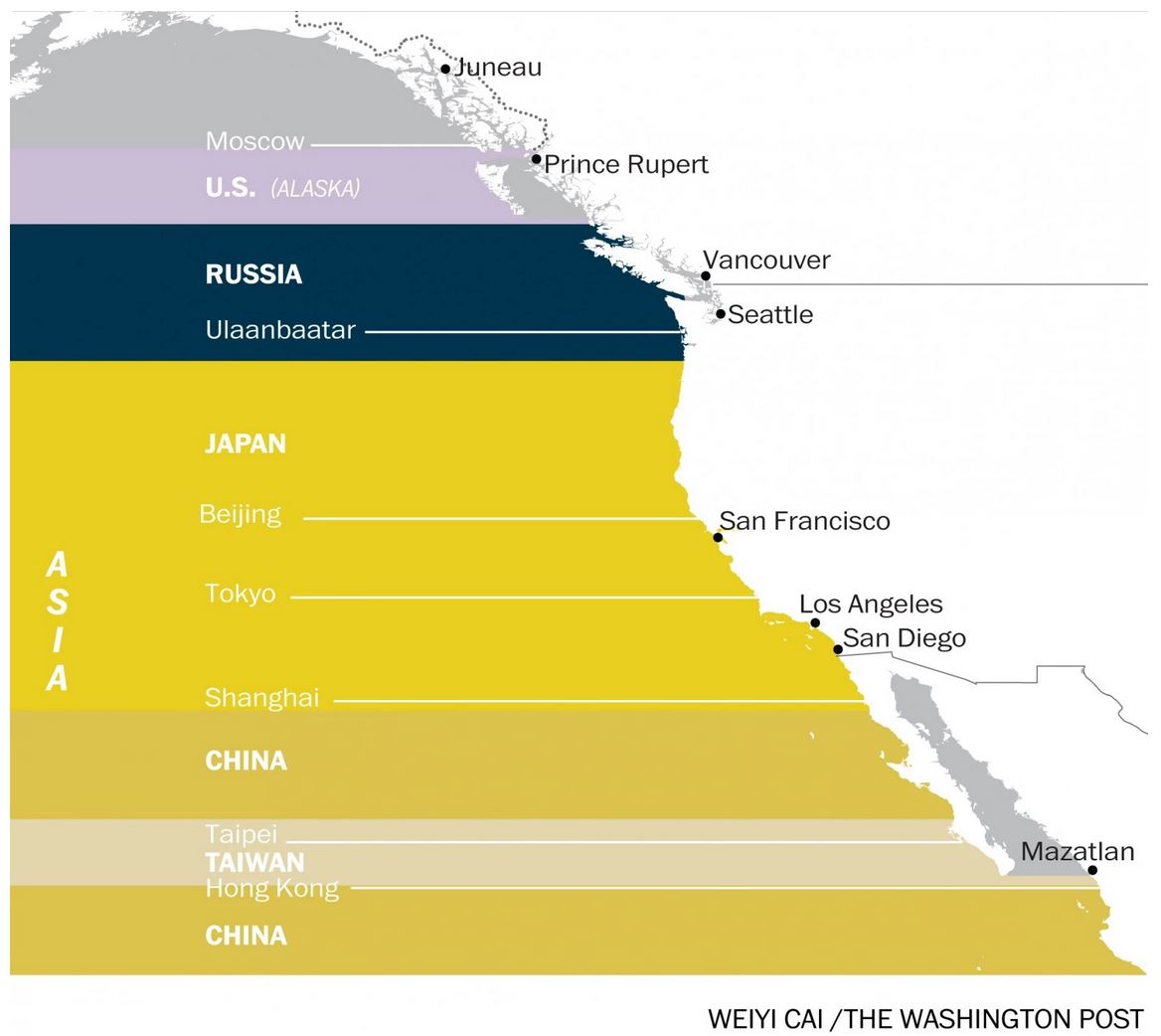 There’s several ways you can look at the world like this. You could follow lines of latitude east around the globe, or you could follow them west. The maps below show what both of these options look like from the Northern Hemisphere. 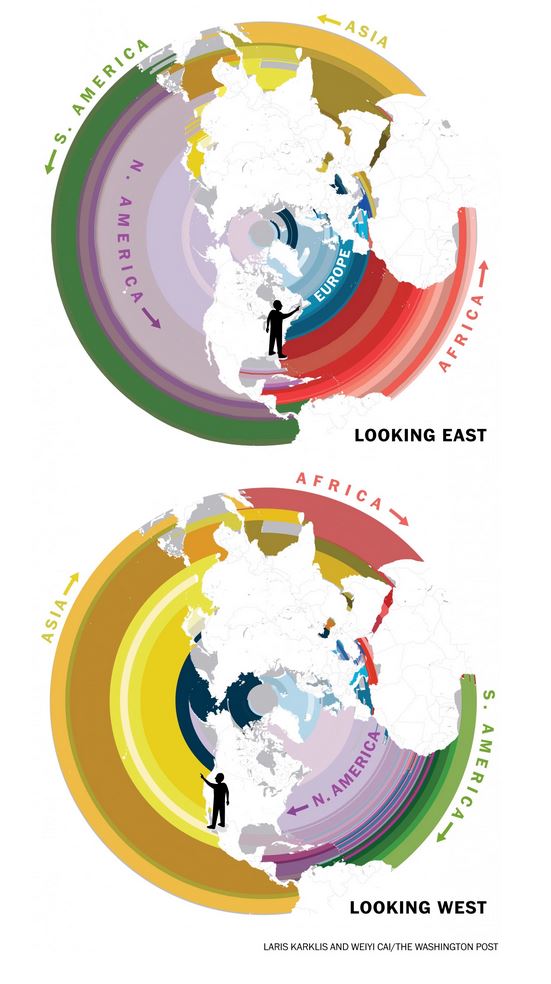 Below is the same map for Asia.

One of the interesting things about this map is it gives you an idea of the size of countries like Somalia, Madagascar and Peru. They look larger here by comparison because the typical map projection that we use, the Mercator projection, makes Africa and South America look much smaller than they actually are (if you’re interested, the “Authagraph” – a different map projection – accurately represents the relative sizes of landmasses and bodies of water on Earth). 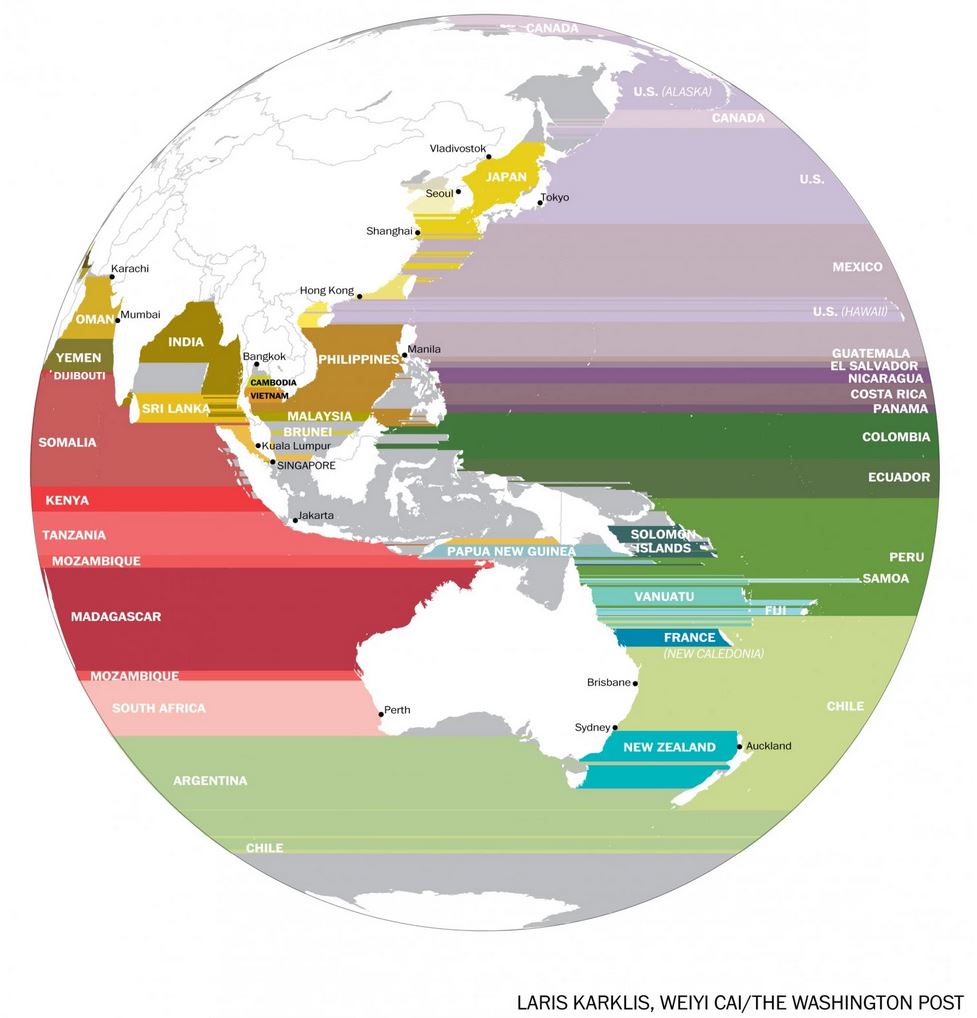 Here is the same map for Africa. Brazil, Australia and Indonesia account for most of Africa’s coasts.