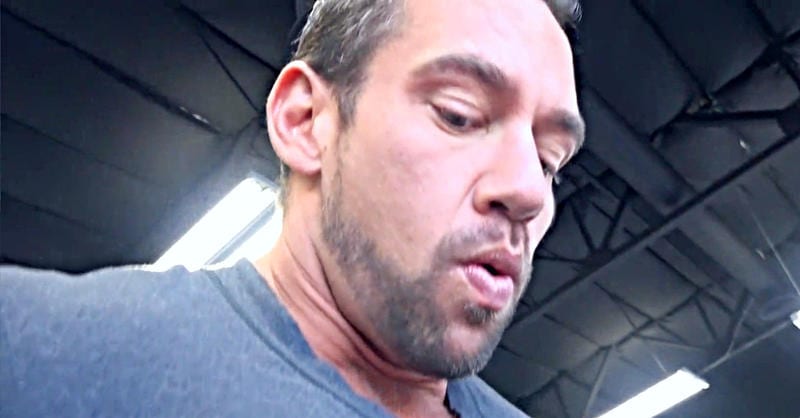 Opening the leather folder, he was immediately taken aback by the figure that was written inside. Surely this had to be some kind of mistake or a practical joke? Then, his eyes traveled to the napkin. It was covered in the same red writing, too.

Re-reading that one line, over and over again: “My mother did not need you to help her,” he was completely incredulous. Then, suddenly, it all began to make sense. 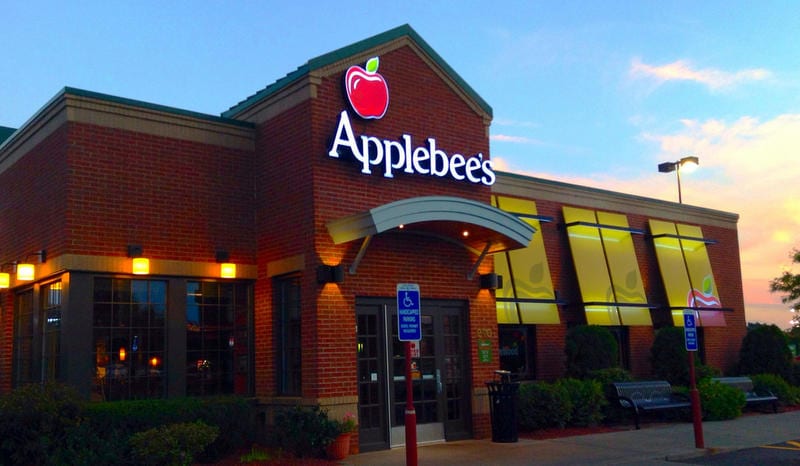 Texas resident Kasey Simmons had been having one of those days. But this particular day was shaping up to be one of the worst days of his career. Working the night shift at the local Applebee’s was difficult enough on most days, but when it short-staffed it was impossible.

He was trying to pick up the slack as best he could, but stemming the tide of customers seemed like a losing battle. And when another woman walked in, Kasey reached the end of his tether.

Going To Be Trouble 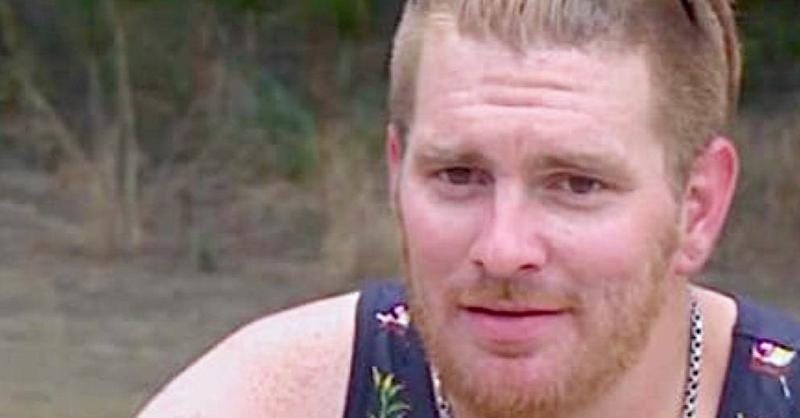 Sitting down with her family, the woman waited patiently for Kasey to take their drink orders. And when he finally got around to serving her table, he decided to be completely upfront about the situation he was facing. “Hey, my name’s Kasey,” he said, trying to crack a smile. “I’m just letting you know that I am so far behind and I’m in the weeds right now.”

When he told her that he would only be able to take their food order in 45 minutes, her face fell.

Run Off His Feet 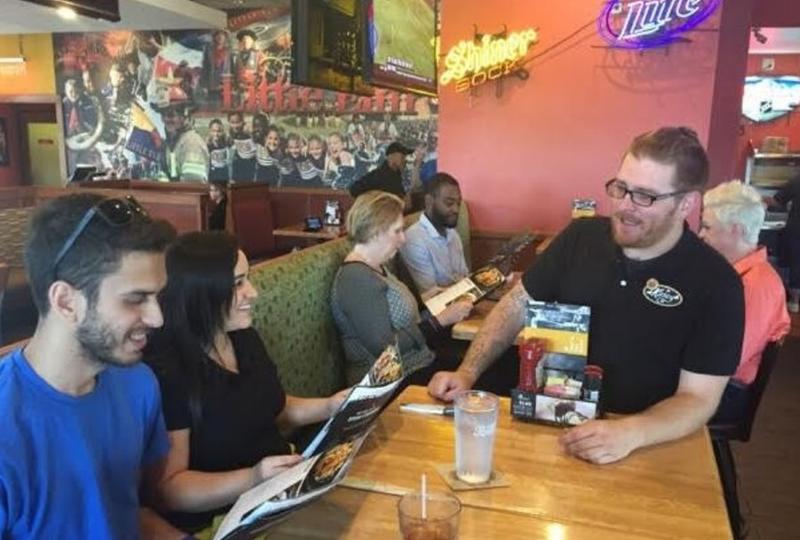 Trying desperately to placate the woman, Kasey offered to buy the table’s drinks. This really wasn’t his day. With orders piling up and more customers entering the restaurant, he was beginning to feel increasingly overwhelmed.

To make matters worse, that’s when the complaints started to come in. The diners were unhappy with the speed at which Kasey was serving them. 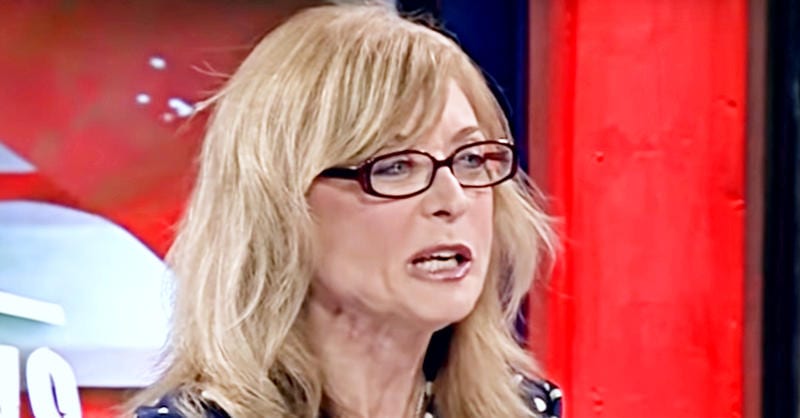 Kasey was just one server, but there were half a dozen tables that needed his attention. He looked over to another woman who was demanding her drinks, but he knew that there was no way that he would be able to serve all these tables by himself! Then he began to consider the alternative. The little voice inside his head egged him on. What if he just walked out right now?

As tempting as giving up seemed, Kasey was no coward. And besides, he really needed the money to make ends meet. 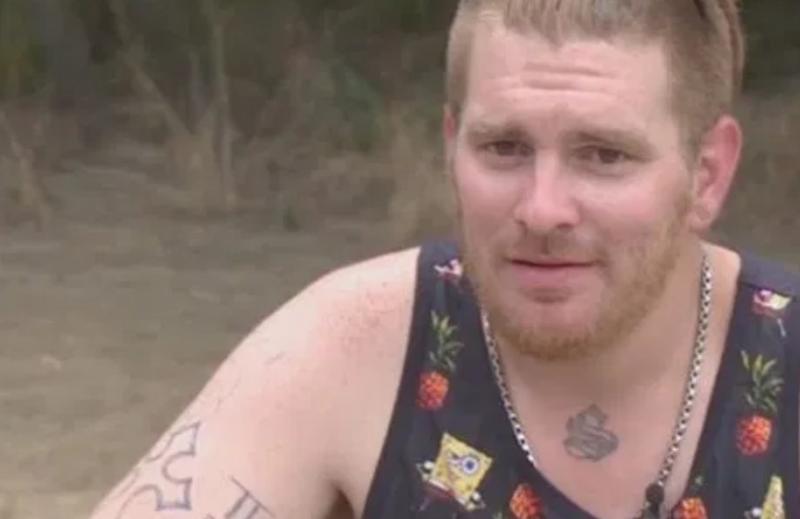 Kasey was used to working exceptionally hard, but he had his limits. He decided to ask management to send a second waiter to his section to help him out. But Applebee’s was very understaffed that night, so he wasn’t surprised when his request was denied.

Trying not to succumb to fatigue, he soldiered on. But the new curveball that came his way was completely unexpected. 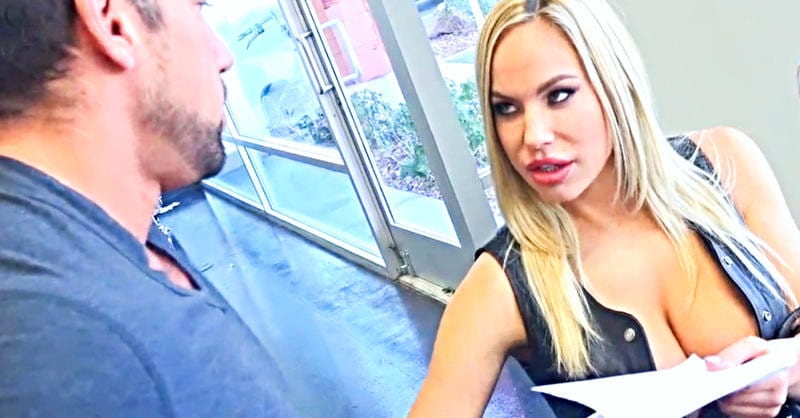 Kasey was used to having both good and bad nights on the job, but the outcome largely depended on the tips he received. Some customers were extremely generous and left huge tips, which he greatly appreciated. But others weren’t as charitable. Even after he’d tried hard to give them good service, some diners would leave small tips, or even worse, none at all. Kelsey knew that this was the reality of life in the service industry.

Dashing back to the woman so he could finally take the table’s orders, he was completely blindsided. The woman told Kasey that the table wouldn’t be ordering any food, but she did order a bottle of flavored water before before she left. Kasey felt awful — she and her family had waited patiently for a whole hour just to order their meals, but now they were leaving.

He hurriedly fetched the woman’s flavored water and then rang up the bill, but he had no idea that she wasn’t through with him yet. 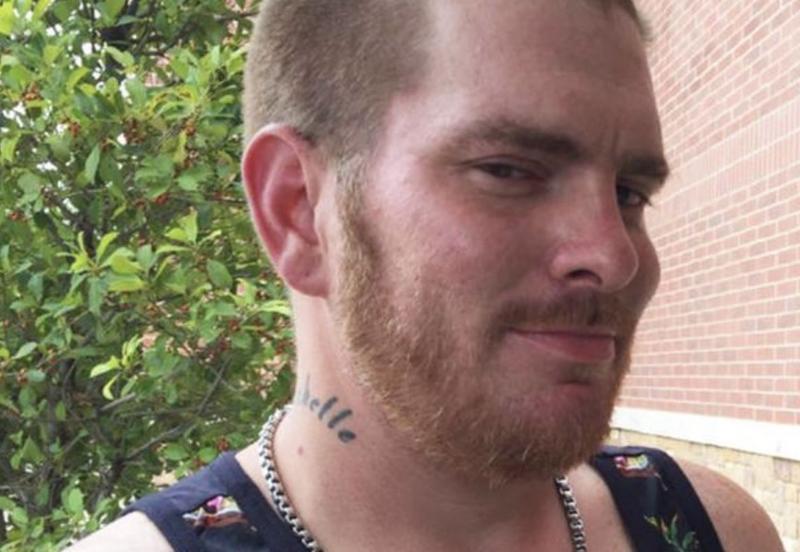 The bill for the bottle of flavored water, minus the table’s drinks that Kasey had said were on him, came to just 74 cents. The woman searched her handbag for the money, but then said that she didn’t have it.

As if Kasey’s hands weren’t already full, she asked him if he could split the amount on two credit cards – 37 cents on each. Kasey couldn’t believe it, but he patiently obliged before dashing off to serve another table. 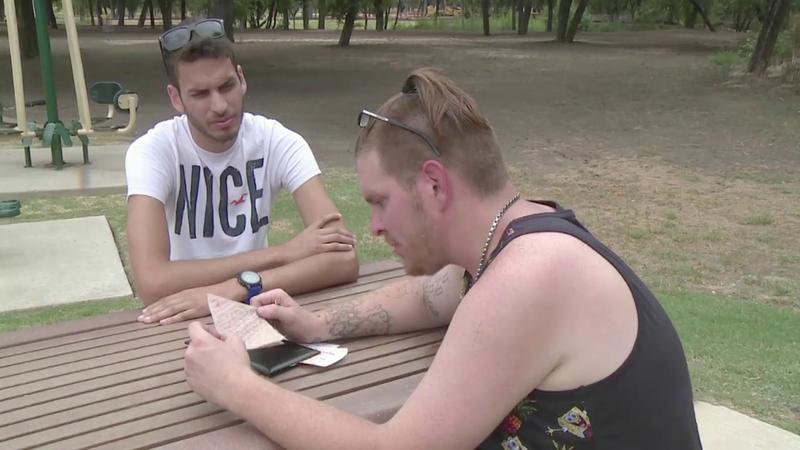 Finally, after attending to his other customers, Kasey went back to the woman and her family to fetch the bill. But as he approached the table, he realized that it was empty. Fearing the worst, he couldn’t help but imagine that they had left in a huff, angry that he hadn’t tended to them as well as he should have.

If that was the case, there was nothing he could do about it now. But when he opened the leather folder and saw the note on the receipt, his eyes widened.

Did He Deserve This? 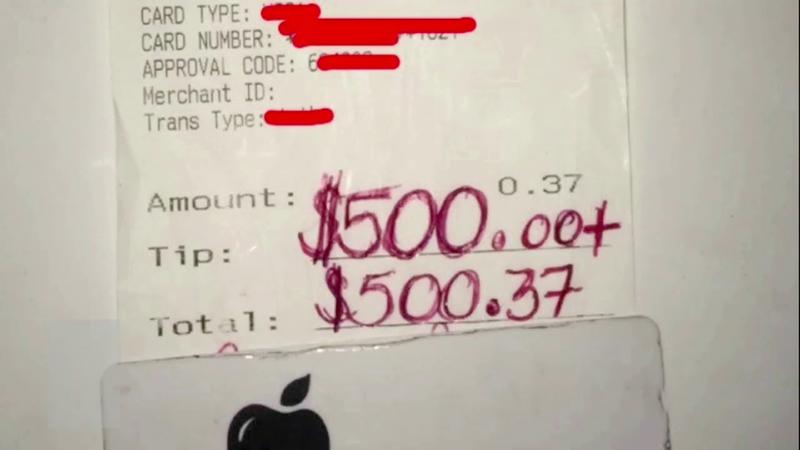 Written in the gratuity line of the receipt the woman had written $500.37. At first, he thought she must have made a mistake. But when he counted the wad of cash and the coins, he knew it was correct.

Tears welled in his eyes as the incredibly generous gesture truly sank in. But he still felt confused. What had he done to deserve this? Then, he saw the note on the napkin. 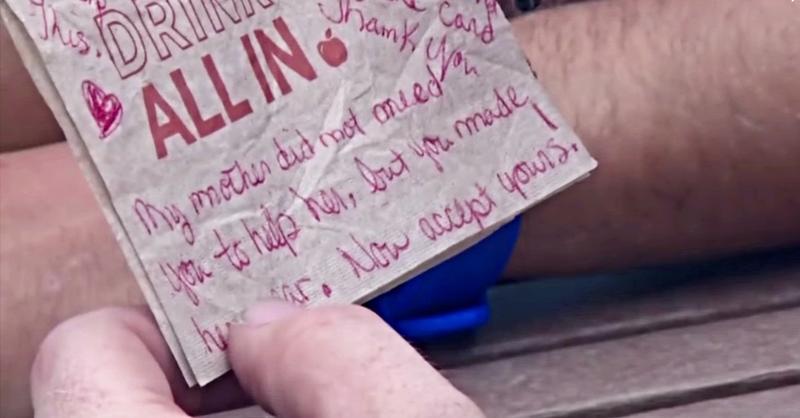 Written on the napkin in red ink was a note that read: “On behalf of the Sullivan family, I want to thank you for being the person you are. On one of the most depressing days of the year, (the passing of my father’s 3 year anniversary) you made my mother’s day wonderful. She has been smiling since you did what you did.”

Puzzled, he read on until the note began to make sense. Only earlier that day, Kasey saw an elderly woman in the Kroger grocery store while he shopped for a few necessities. Immediately noticing that she looked quite upset, he approached her. “I noticed there was a lady standing in front of me,” he recounts.

“It looked like she had been crying because once in a while she’d glance over to me.” But he had no idea that his actions would send some good karma his way.

Trying To Brighten Her Day “I go up to her and say, ‘It’s not raining inside. There’s no reason to look so down. I’m sure you have a beautiful smile because you are a beautiful lady.’ It looked like she had a bad day,” Kasey remembers.

“She kind of shut me down a little bit. I wanted to make her at least grin a little bit and it wasn’t happening,” He added during an interview with ABC News.

A Small Act Of Kindness After speaking to the elderly lady for a while, Kasey offered to pay for her groceries. He wanted so badly to brighten her day. The total came to $17. After insisting that he would pay for it, she agreed.  She smiled at him warmly, and that’s when Kasey knew that he had just made her day a little easier. But he didn’t give it much thought after that.

Little did he know, his good deed was about to come back to him in ways he’d never imagined. 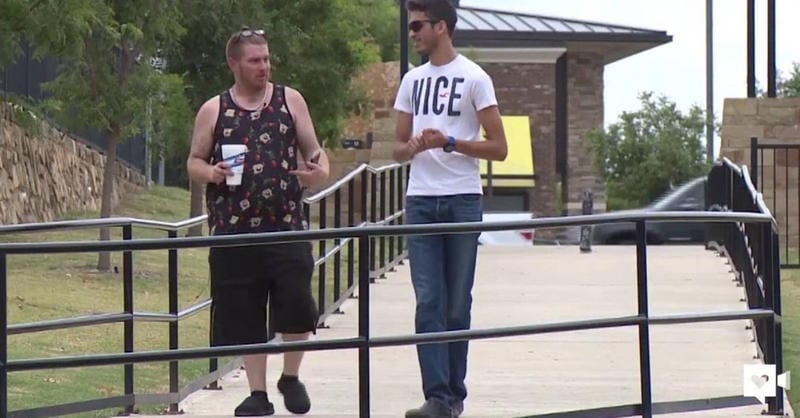 After he had paid for the stranger’s groceries, Kasey bid her farewell and gave her his Applebee’s business card. He wanted her to have someone to call if she ever needed help. Then, he headed off to begin his shift.

“Every time I get to work, I say, ‘It’s a great day. I’m going to make some friends and make some money,'” Kasey said. “This day happened to be the worst day of my Applebee’s career. I was having such a bad night that I was about to walk out of [that] place, and this lady comes in…” Kasey had no idea that the woman who sat down in his section was actually the woman from Krogers’ daughter. It turns out that she had paid a special visit to Applebee’s just so that she could repay him for the kindness he showed her mother.

“Her grocery was only $17.00, and you insisted on paying and told her she was a very beautiful woman… my mother did not need you to help her, but you made her year,” the note concluded. 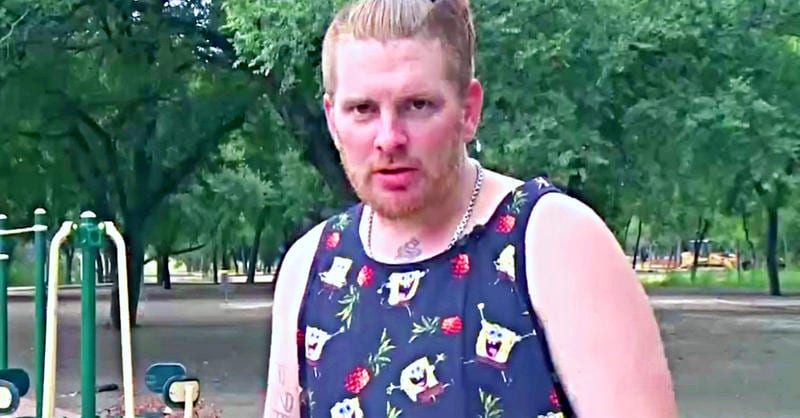 It wasn’t long before Kasey’s story was picked up by local news stations. Before he knew it, the story had gone viral. When he opened his Facebook feed, he was surprised to see netizens from all over the world hailing him as a hero!

“Fantastic to see that there are still good, generous, humble, sincere and caring people in our vicious world of today. Well done and thank you!” one commenter wrote.

How To Change The World Another Facebook user described Kasey’s story as “heartwarming,” and almost everyone agreed. Then, the original commenter made a suggestion. “If everyone did one act of kindness a day the world would be a much better place,” she said.

But just how does Kasey feel about becoming a hero and garnering so many followers and fans’ attention on social media? Despite his recent fame, Kasey remains humble. He just did what he thought was right by trying to brighten a stranger’s day. “Even with what I did at the grocery store, I would want someone to do that for my daughter, mom or grandmother,” he confessed.

“If they looked the way that woman did at Kroger, I would pray you would do the same.”