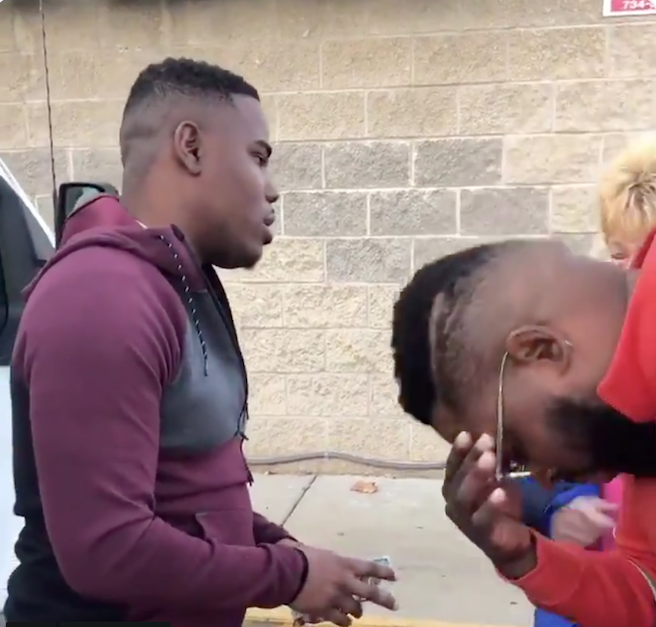 Worse Than He Thought

He wanted to do an act of kindness for a stranger. But what he didn’t know was how much she was really struggling at that moment. His heart sank with sadness, but he tried not to show it. He knew something was wrong when he first saw her, but he didn’t know the extent of it.
He saw people struggling every day, and he did what he could to make things better for them. But he couldn’t have imagined that what he was doing right now would have made such an impact. It was at this moment that he couldn’t take it anymore, and he broke down. 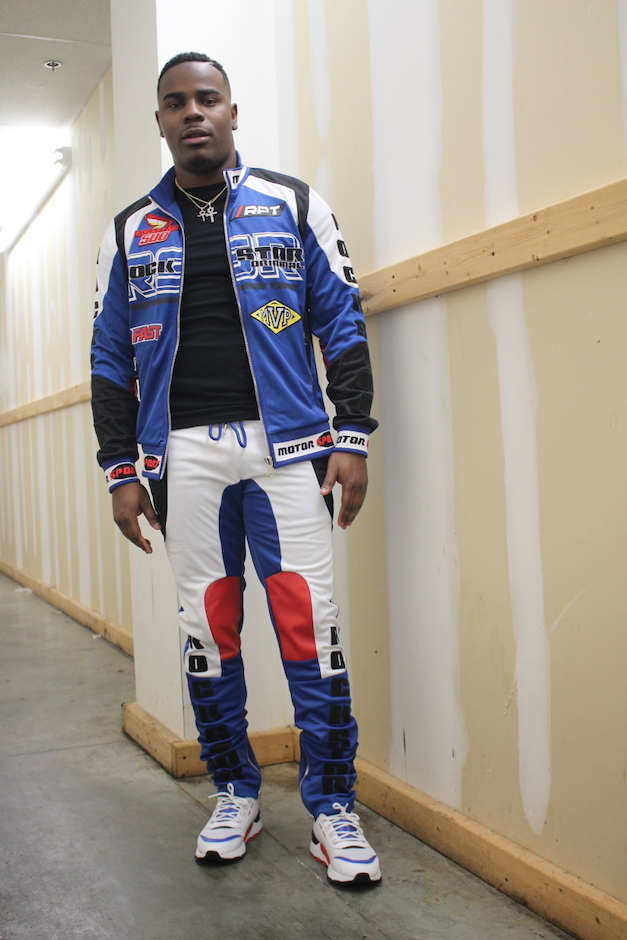 Carlos Davis wasn’t used to tears. In fact, it was quite the opposite — he lived for laughter. Ever since he was a young boy, he loved to make people laugh. And he was quite good at it, too. Then, as he grew older, he started making funny videos and posting them online to share with his friends.
With the advent of social platforms like Vine and Instagram, Carlos’ comedy sketches became quite a sensation. But he wanted more. 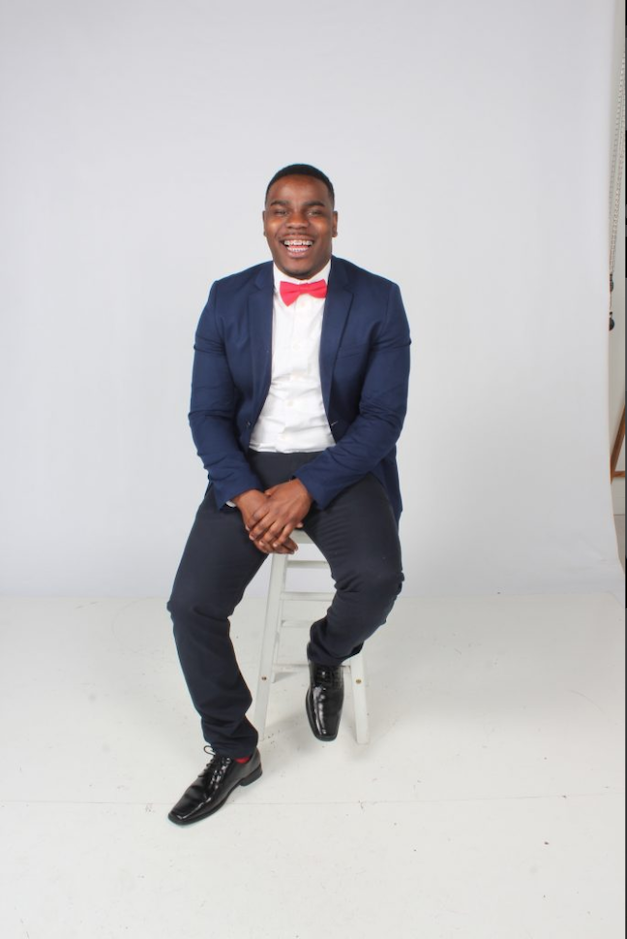 Carlos started posting his clips to Instagram in 2013, and he soon grew a loyal following. Eventually, he had enough fans that he decided to take his career to the next level. He began touring the country, performing his comedy act at clubs in different cities.
The life of a traveling comedian is not all that glamorous, but he didn’t care. It was his passion. And his dedication was about to pay off big time. In 2016, Carlos landed the gig of a lifetime. He was introduced to hip-hop star Chance the Rapper, who told him he loved his comedy. And that was not all.
Chance asked Carlos to provide voice intros for a few songs in his new album, Coloring Book. He was also selected to participate as the narrator in Chance’s Magnificent Coloring World Tour. Things were going great. But soon he was reminded that it was not like that for everyone. 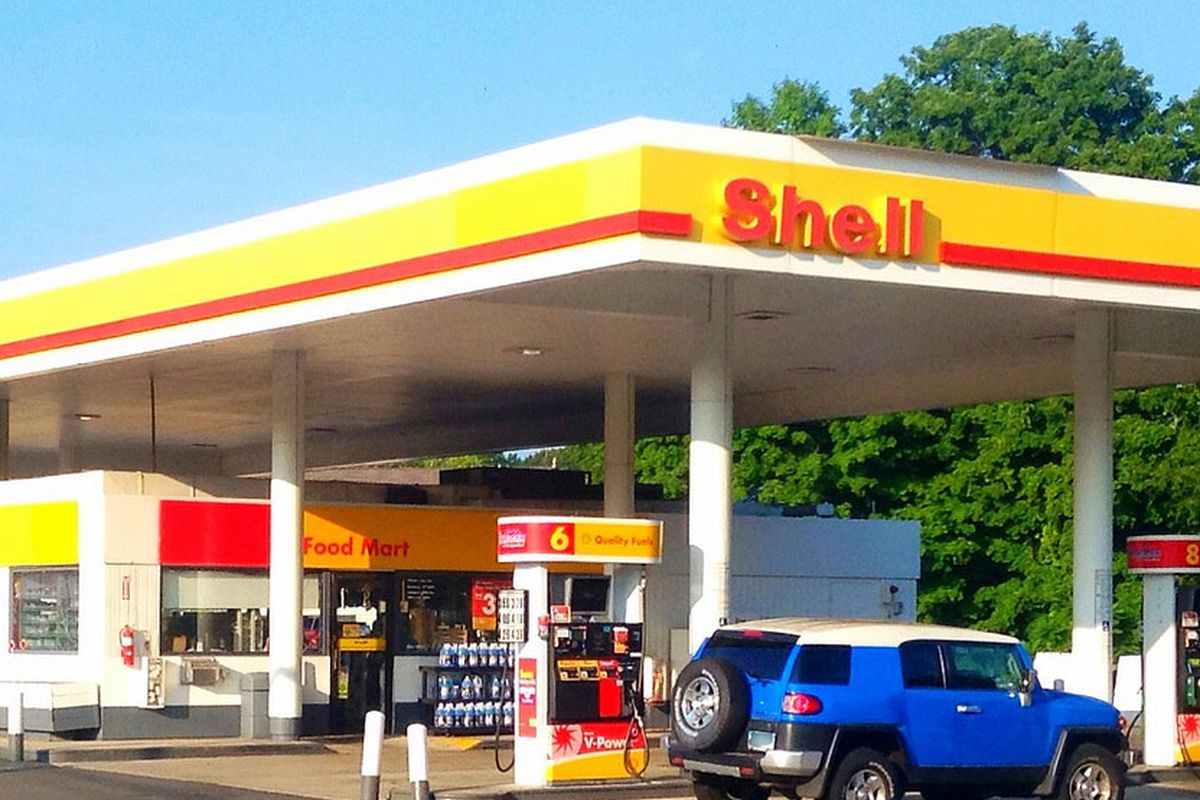 One day last October, Carlos was driving around with some of his friends when they stopped at a gas station. It was a cold autumn day, so everyone was going quickly about their business, hoping to get back to the warmth of their cars and houses. But one of Carlos’ friends couldn’t help but notice another customer who was acting odd.
It was a middle-aged woman who was pumping gas into her car. But something wasn’t right about her demeanor.


Not Something You See Every Day 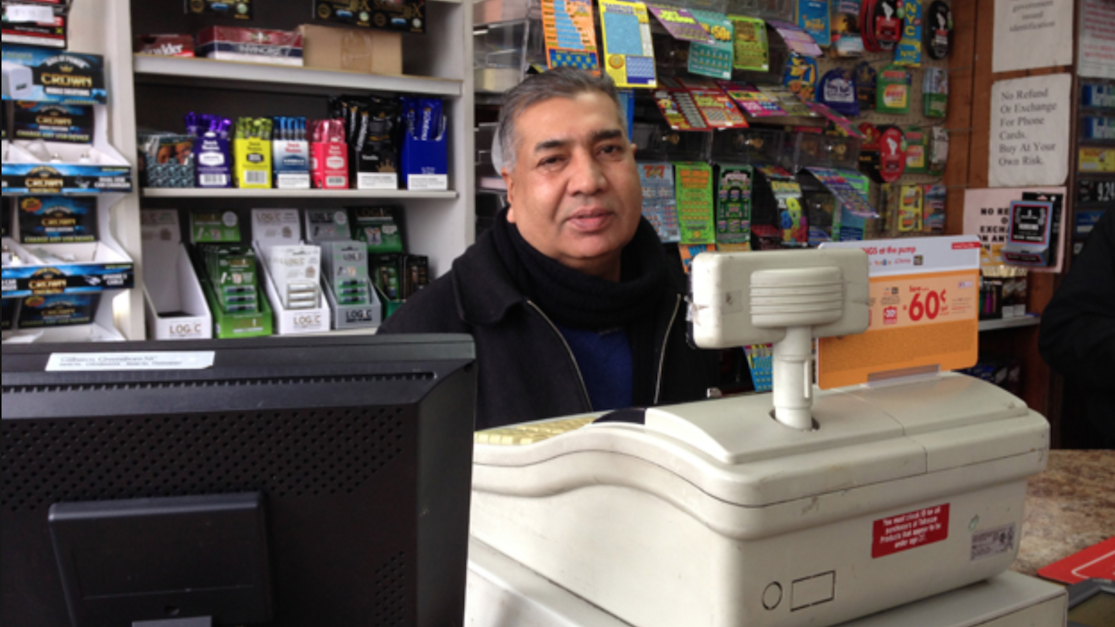 Carlos’ friend noticed that the woman’s eyes were puffy and she looked extremely downcast. Then he saw her again at the cash register, paying for her gas. That’s when he realized something else. The woman was paying for her gas bill in pennies.
He stared in disbelief as she pulled the coins one by one from her money purse, while the gas station attendant waited patiently. Carlos’ friend rushed back outside to tell the rest of the group. 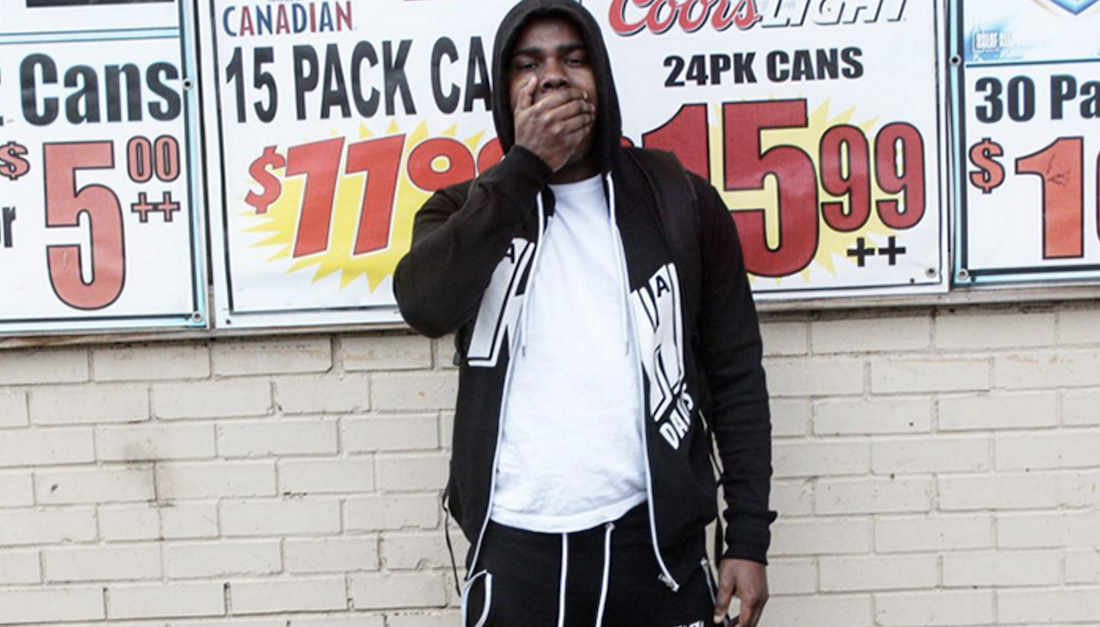 When Carlos heard the story, he felt sorry for the woman. Growing up in Detroit at the time of the economic crash, he knew what it was like to lose everything. But now, fortune was smiling upon him. So he decided he was going to share some of his good luck.
He went back inside his car, while his friends walked over to the woman. They had a plan. 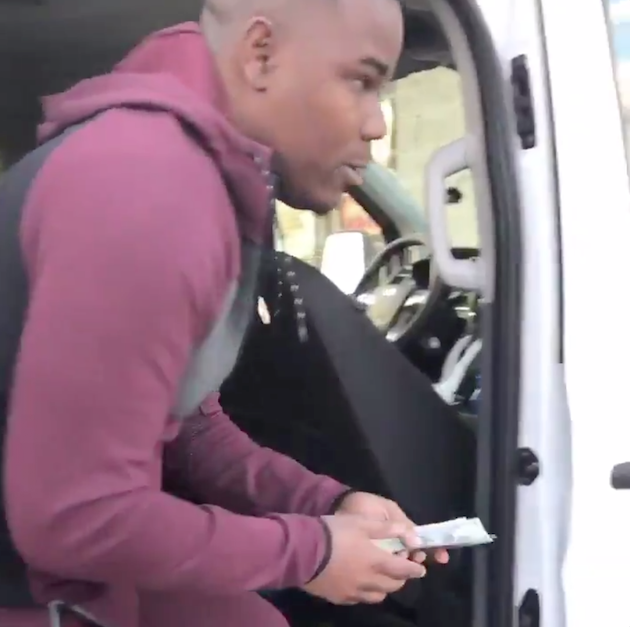 Carlos’ friends asked the woman to walk over to where their car was parked. The woman was bewildered, not knowing what it was that these three strangers wanted with her. Then, the door of the van opened and Carlos stepped out, holding a small wad of $100 bills.
He held it up to the woman and said, “they’re for you.” The woman’s jaw dropped to the ground. The woman clearly had no idea what was going on, as she looked from face to face with her mouth wide open. Perhaps she thought it was a scam, or they were trying to con her into doing something illicit.
Anticipating her train of thought, Carlos said, “it’s not illegal. We’re comedians.” Then the woman dropped a bombshell that none of them were expecting. “My husband just died a week ago,” said the woman, as if trying to explain. “We weren’t like this before. I didn’t ask nobody for nothing. I didn’t even ask you,” she said, as her voice broke down and she lowered her head to cry.
Stumped by the revelation, all Carlos could do was put his arm around her and try to comfort her. Meanwhile, his friend couldn’t contain the tears. The incredible moment continued. “We got love for you, that’s for you,” said Carlos as he folded the wad of cash and handed it to her. The woman still couldn’t believe it. “How did you guys…” she started and trailed off, failing to articulate her surprise that the men knew she was struggling.
“He told me you were paying for your gas with pennies so I had to show love,” explained Carlos. “It’s only right, we gotta take care of each other.” The woman didn’t know how to thank them.


Kindness For The Sake Of It “God bless you,” the woman said, wiping off tears from her face. “How do I thank you or repay you?” But the men didn’t want to be repaid. “You don’t have to, just pay it forward,” said Carlos’ friend. “That’s for you, ma’am,” added Carlos.
The woman smiled, clearly overwhelmed by these strangers’ kindness. And it looked like her faith was already being restored. 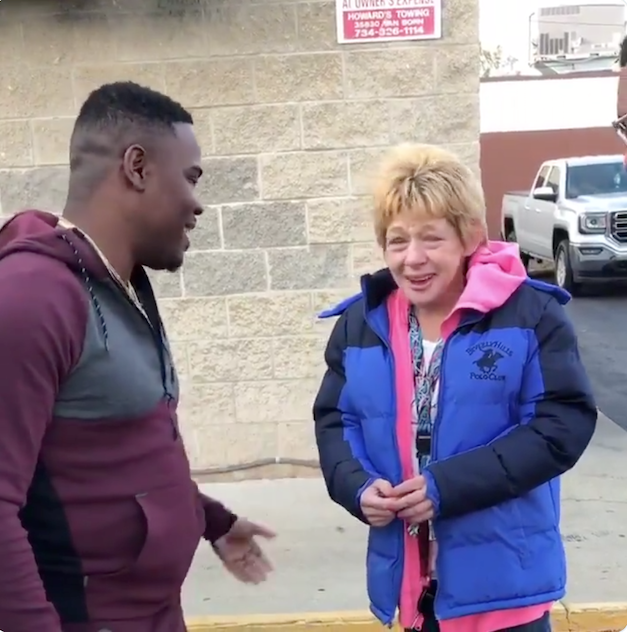 “I guess He does look down,” the woman said, hopeful that this act of kindness meant that God was watching over her. “He’s definitely watching over you,” Carlos told her to reassure her. “Thank you so much,” she repeated, and then they parted ways.
Carlos later uploaded the video of the interaction on Twitter. The footage struck a chord. Carlos’ video soon went viral, and it was viewed almost two million times in a matter of weeks. People from all around the world shared it, touched by the kind gesture toward a grieving widow. However, some people were a little suspect of Carlos’ motives, given that he had filmed it and posted it online.
Some thought he was just doing it for the publicity. But a quick look at Carlos’ Twitter feed tells you all you need to know. It turns out, this is not the first act of kindness that Carlos had done. On his Twitter page, you can see several posts captioned “This week in I Love You,” where he usually uploads something inspirational.
Many times it’s a kind gesture like what he did for the widow. For example, on Halloween, he encountered a group of children at a convenience store and bought them all candy. Given that his career is taking off, it’s good to see him give back.
Must Read
Three Indigenous Tribes In The United States Will Get $75 Million For Relocation Due To Climate Change
A New Supercomputer Simulation Animates An Incredibly Accurate Look At Universal Evolution
Genome Studies Manage To Find A New Branch Of Fungal Evolution