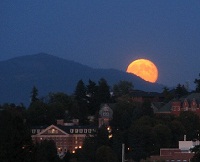 An explanation of the “Moon Illusion”.

When you look up at the evening sky as the moon begins to rise above the horizon, it seems to swell and then retract as it goes higher in the sky. This effect, where the moon looks bigger along the horizon, is known as the “moon illusion”. It’s not only limited to the moon – it can also be seen as the sun rises as sets. You can dispel the illusion by covering one eye or using a telescope. Humans’ binocular vision is only part of the reason behind the disparity in size. Not convinced? You can also hold a coin or another object up to the moon as it travels through the sky to provide a point of reference to see that the moon remains the same size despite its appearance.

How does the moon illusion work?

The true cause of the moon illusion is a mystery to scientists, both ancient and modern. The strange thing? The moon is actually roughly 1.5% smaller when it is near the horizon than when it is high in the sky, because it is farther away by up to one Earth radius.

One theory hypothesizes that the illusion occurs because when the moon or sun are along the horizon, your brain has more objects to use as a reference, thus allowing it to compare against size and distance. When you have the skyline with trees, buildings, and other objects, your brain tends to interpret the moon as larger than those objects. However, when the moon is far above the horizon, your brain has fewer objects to use as a reference to compare to the size of the moon. Therefore, when the moon is in the empty sky, it appears smaller.

The Ponzo Illusion: how to trick your brain

Part of the reason your brain has such a hard time interpreting the size of the moon in the sky is because the moon’s size does not change as it goes across the sky. Other objects in the world around you (that are not in the sky) appear to be smaller as they move closer to you and gain size as they move farther away. This expectation is physiologically imprinted in your brain. Optical illusions that you may have seen where you compare the size of two lines or circles, such as the Ponzo Illusion, illustrate your brain’s ability to trick itself based on the sizes of objects. Note that in the Ponzo illusion, due to the converging lines, the image that is “further” appears to be larger – even though it is the same size as its foreground version.

Conclusion? Not quite yet…

There is no complete or concrete explanation of why we see a disparity in the moon’s size as it moves through the sky. More research is needed to determine what visual cues cause changes in our perception over long distances, and it is possible there is no single theory to explain the moon illusion, since it could be the combination of many processes at once. This article was by no means a detailed explanation of the problem, but more of an introduction. To read more about the moon illusion, and the theories used to understand it, visit the references below.