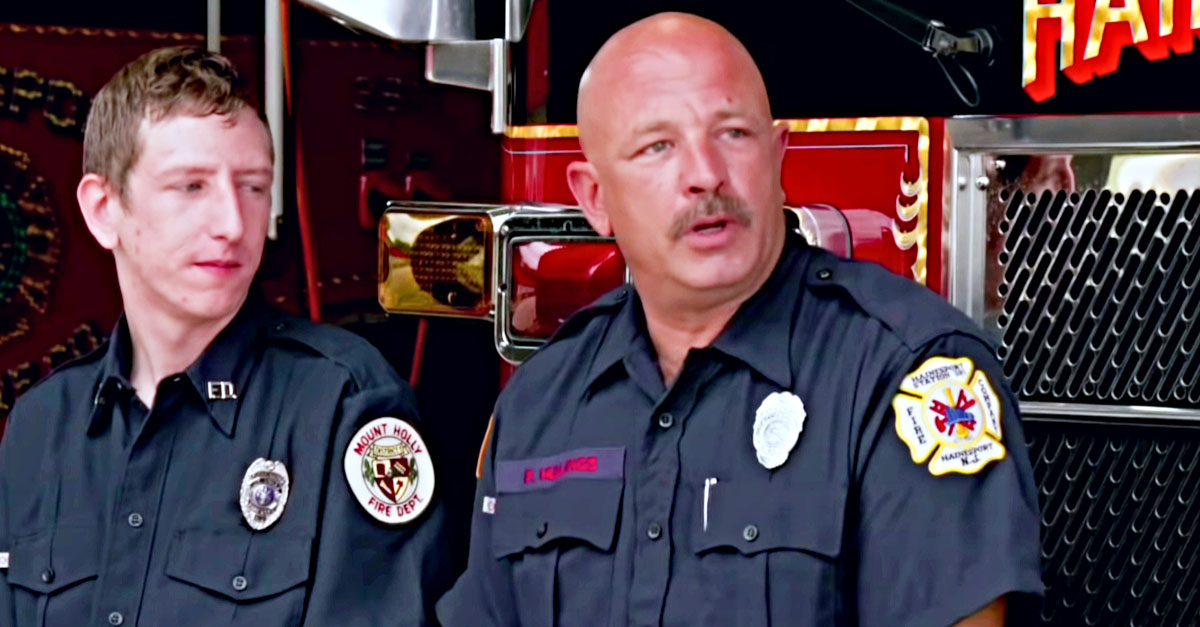 When Paul Hullings and Tim Young walked into the 130 Diner in Delran, New Jersey, they had no way of knowing the life-changing series of events they were about to begin. The diner was empty, but that’s to be expected at 5:30 AM. The only person there besides them was the late-shift waitress. After a while, she approached them, silently slipping them a note she had written. They were not prepared for what they read.

Paul and Tim were used to seeing the harder, uglier side of life. As firefighters, they saw it every day. What they had seen that night was clearly visible on their faces. However, what would happen in the diner that night would affect them both deeply. They just didn’t know it yet.

Not A Glamourous Occupation

Liz Woodward was exhausted. Her shift had been very long already and there was still no end in sight. She just had to keep going. She was working toward a goal, which meant she had to put up with her odd ours, despite the toll they took on her. She looked at the men as they walked in and immediately saw their soot-covered clothes and the tired look on their faces and she knew who they were. Her heart jumped as she recognized them.

She went over to take their orders. When Paul spoke, she knew she had been right about them. “I need the biggest cup of coffee that you have,” Paul said as he rubbed his eyes. Tim just nodded, indicating that he wanted the same. As she was preparing their coffee, Liz couldn’t help but overhear parts of their conversation. It was then that she looked up at the news report on the TV and saw their faces staring right back at her.

Liz stood frozen in horror as she listened to the news report. While finally under control, the blaze had been raging for most of that night already. It had started in a North Brunswick warehouse, which was less than an hour’s drive from the diner. It was at that moment that Liz decided what she was about to do next.

Liz could barely stop shaking as she wrote the note on their bill. She added a picture of an ax while she waited for the two men to finish their coffee and the farmhouse breakfasts they had ordered. Once they were finished, she slipped the note onto their table as she cleared the plates. Paul was the first to see the note, and he couldn’t help but cry when he read it.

Both Paul and Tim were speechless after reading the note. It was clear that Liz was also struggling financially, especially since she not only worked weekends or night shifts, but any shift she could in an attempt to earn the money she needed to pay off her student loans. Apart from that, she still needed to make ends meet too! Little did they know just how much trouble really waited for her at home.

Tim and Paul had been fighting the blaze in North Brunswick for over 12 hours before Tim realized that Paul was reaching his limit. By the time the fire was brought under control, the two men were dead tired. Tim realized that Paul hadn’t had anything to eat yet, which is why they decided to go to the diner, only to walk into a situation they were not prepared for.

Liz had no way of knowing how her life was about to change. Once they had read the note several times, Timp and Paul immediately took a photo of it and uploaded it to Facebook. The post spread quickly, gaining thousands of likes, comments, and shares. Strangers began to recognize her on the street after her overnight Facebook fame. At this point, you might wonder what the note said.

On Her, Not The House

Liz’s touching note read: “Your breakfast is on me today – Thank you for all that you do; for serving others and for running into the places everyone else runs away from. No matter your role, you are courageous, brave, and strong… Thank you for being bold every day! Fueled by fire and driven by courage – what an example you are. Get some rest.”

“I started tearing up and it made me feel good – us firefighters are wanted, people care about us,” Paul said during an interview with WPVI-TV. However, it was only once the post har already gone viral that the two mean would learn of the problems that were facing Liz. When they stumbled across Liz’s GoFundMe account, the two men knew that they had to do something.

In Desperate Need Of Help

“Such a selfless and kind act. I definitely urge my friends to make a trip out and support the business, and if Liz happens to be your waitress, tip big,” Tim posted on Facebook after he learned the truth. “Turns out, the young lady who gave us a free meal is really the one that could use the help…”

The Truth About Her Father

“We have rented a van before, twice actually, so that my Dad could attend his father’s funeral and his daughter’s graduation, since transport isn’t covered unless your trip is deemed medically necessary (and it’s very expensive out of pocket, even to rent for a few hours),” Liz’s GoFundMe page read. “It was the first time since his aneurysm ruptured that he was able to interact with family members and friends he hadn’t seen in years.”

Her father had had an aneurysm that left him permanently confined to a wheelchair. Liz’s GoFundMe wasn’t set up to help her, but to help her buy a wheelchair accessible van. All in the hopes of making her dad’s life that much easier. Paul and Tim were struck by the fact that this was just another example of how this struggling waitress was trying to improve the lives of those around her.

“We watched my father smile and we witnessed joy and accomplishment, and we watched his memory strengthen with every person who left his side in disbelief that he could remember exactly who they were and what got them in trouble back in the day,” Liz wrote on the GoFundMe page. “See, my Dad is still Steve. He’s just Steve who survived a brain injury and now uses a wheelchair. He deserves to be Steve and not just a patient or a number on a chart,” she continued.

By the end of the campaign, the kind-hearted donors had donated a total of over $70,000. Obviously this was more than enough to buy the van her dad needed and then some! All of that, just because she decided to brighten the day of two tired firefighters. She never expected to be rewarded for her actions, let alone to receive such a huge reward.

As far as Liz is concerned, however, she didn’t do anything noteworthy or special when she paid the $15 breakfast bill. “I know it’s being remarked on as this extraordinary act. It’s small. It’s a little gesture,” Liz said during an interview with WPVI. The last thing she expected when she paid their bill was that it would snowball and become something so huge.

“Our family has witnessed an outpouring of love and support from around the world, and I want to thank each and every one of you beautiful human beings for making this dream possible!” Liz wrote in touching thank-you on her page to express her gratitude to everyone that had contributed. This just proves that one small action can have much greater and far-reaching consequences.