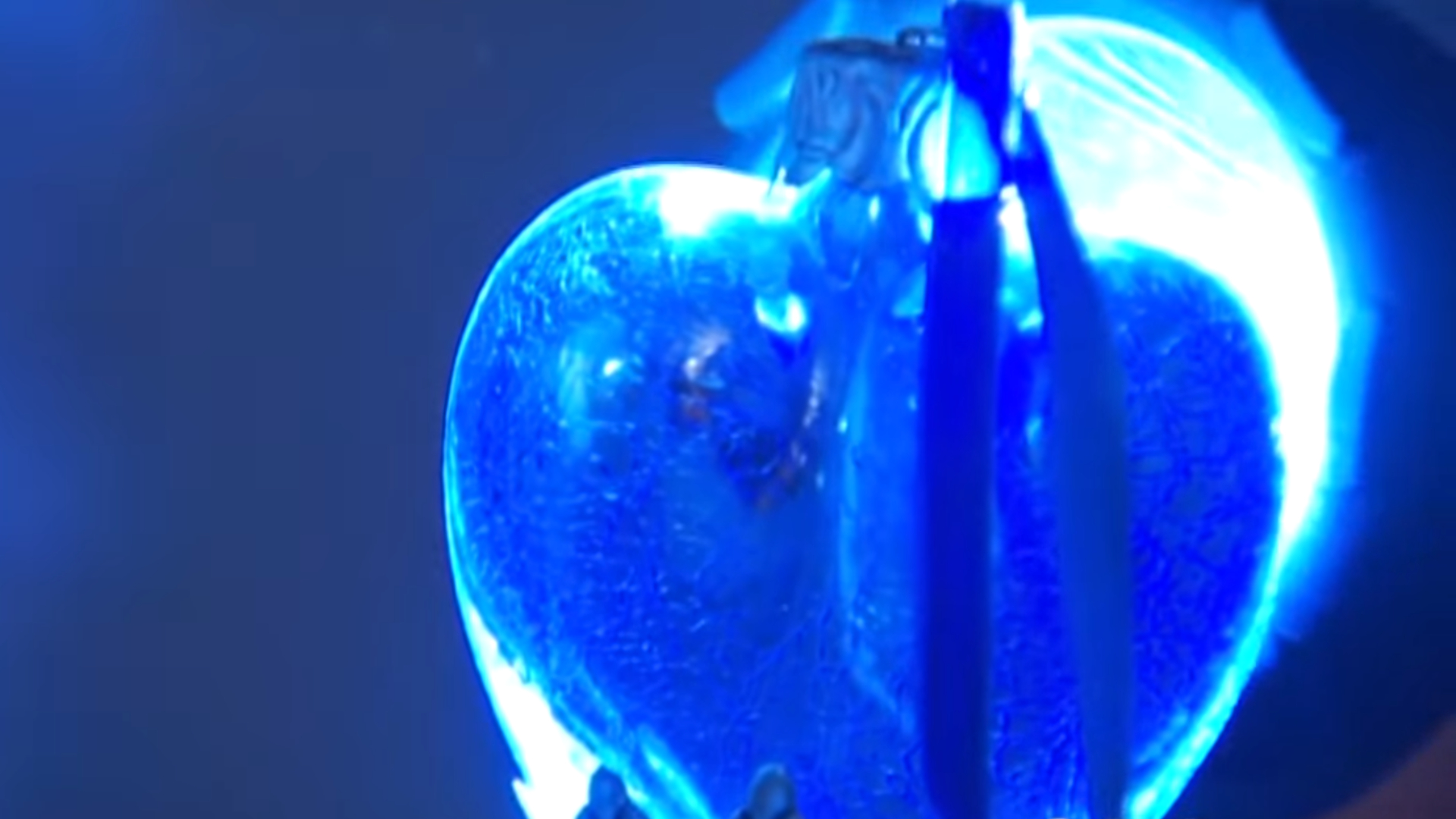 When her daughter lifted her mysterious purchase and turned it over to inspect it, something moved. “There’s something inside,” she whispered.

Holding the heart-shaped object up to the flashlight, she began to make out two round shapes beneath the glass. But when she saw the substance inside the cavity, she knew that what she held in her hand wasn’t a Christmas decoration at all, but something else entirely.

Priscilla Bailey, a Plymouth resident, loved nothing more than a good bargain. Whenever she passed a Goodwill store or charity shop, she just couldn’t help herself. She trawled the dusty shelves and boxes for anything that looked unusual or interesting.

But she never suspected that today’s frivolous bargain buy would eventually lead to the police becoming involved.

Priscilla’s favorite color was blue, and she collected glass ornaments. So when her eyes fell upon a beautiful heart-shaped blue Christmas decoration, she knew she had to have it. It was such an unusual-looking piece that it took her breath away.

But when she eventually discovered what was inside it, she wouldn’t be able to breathe.

The beautiful glass ornament had been thrown in amongst the other Christmas tree decorations on a display table at her local Savers. When she saw the price tag of a mere $2.00, she didn’t hesitate. Thinking that the ornament would be a fine piece for her Christmas tree or even as a gift, she happily paid for it and took it home.

Of course, she wouldn’t realize what she had done until much, much later…

Getting A Closer Look

Priscilla took her item home. She couldn’t wait to get a closer look at it. She unwrapped it and began to study the engravings around its mounting, marveling at the tiny figures etched into the metal around the glass – they looked like angels, or perhaps Vikings.

She turned it this way and that, admiring the way the glass sparkled as it caught the light coming in from her little kitchen window. But suddenly, an odd sensation came over her.

The blue heart was heavy, but it looked as if it was hollow inside. Priscilla peered closer and closer until her warm breath fogged up the glass. But if there was something inside her trinket, she couldn’t see it.

She placed it on a hook in her kitchen and didn’t think about it again. That is, until her daughter came around for a visit.

Priscilla’s daughter, Kat, was a lover of glass art. Her passion for glass blowing and design had eventually been fulfilled when she started her very own glass blowing business. Priscilla leaped up with excitement to retrieve her new ornament and exclaimed: “Look what I found, I got it at Savers.”

Naturally, Kat was the perfect person to help shed some light on the glass heart’s mystery.

Kat, impressed with the glass heart’s craftsmanship, held the strangely-heavy object in her hand. She had never seen anything like it before. But she was as puzzled by its weight as her mother. It was hollow but too heavy to be empty.

There had to be something inside… and now, she just had to know what it was! She fetched a flashlight from the kitchen drawer and came running back.

Priscilla, thrilled by her daughter’s idea, held the bauble up while Kat shone the flashlight through it from behind. She shook it a little, and they both saw the contents shift. It took a few moments for the women to realize that there were two separate areas inside the glass… and it was in these two golf ball-sized compartments that the secrets were stored.

Their eyes grew wide and Priscilla lost her breath.

Priscilla knew she had to call someone… anyone. People needed to know what they had found. She called the authorities, and then the Boston Globe. The journalists arrived shortly afterward, and Priscilla escorted them to her kitchen table to explain everything.

She hoped the media would spread the discovery far and wide and that someone would come forward with more information.

“Right now, it’s hanging up there when I do my dishes. I sometimes stare at it,” Priscilla tells the journalists. “It’s small. The two spots in it are small, the size of a golf ball,” she added. When she brought it over for the reporter to inspect, everyone waited with bated breath.

It was becoming very clear that this ornament was no ordinary Christmas tree ornament. And when she told them about the powder inside, they were incredulous.

Kat takes over and recounts how she had discovered what the heart-shaped ornament was really hiding while Priscilla fetches the flashlight once more. She shines it through the glass and it’s as clear as day. There is indeed powder moving inside.

Was this beautiful ornament actually an urn? And whose ashes were hidden inside? Priscilla was taken aback by the thought. She had been shaking and carrying around someone’s remains, and worse still, she had them in her home.

The true use of the trinket she had bought was more than a little off-putting. But then, she had another thought that broke her heart.

How had someone’s ashes ended up in Savers? The thought of someone’s loved one being unceremoniously sold in a thrift store was enough to bring Priscilla to tears. Surely the family must be heartbroken?

But Kat knew exactly what to do about the sad situation – it was a long shot, but she knew that she had to try.

“It’s beautiful. It must have a story, so that’s my goal — to find out where and who this belongs to,” Kat says to the reporters. She hoped that with the police notified about the loss and the media coverage, someone will recognize the urn and come forward.

But what will happen to the beautiful urn in the interim?

Priscilla vows to keep the urn safe until its rightful owner is found. She believes that fate intervened on that fateful day in Savers and that she was meant to find it. With national coverage of the story on the news and online, she is sure that the owner will be found.

Her story even reached Facebook – but that’s when things took a strange turn.

Taking It To Social Media

“It breaks my heart that this was tossed away and just sitting on a shelf at Savers for $2,” Kat wrote on a Facebook post. She says that she hopes that the person who does come forward is the real owner and that she can learn a little more about the urn – who it belongs to, whose ashes are inside, and how it came to be in a thrift store in the first place.

The manager of Savers says that most of their donations are made by locals, so it’s extremely likely that whoever owns the urn lives in the vicinity of Plymouth. Then, Kat’s post went viral and people from all over were sharing similar stories.

A woman named Connie Whiteman Slatt wrote: “Please let me know what you find out as I have one also, found mine at a thrift shop too! It’s heavy in weight.”

Then, someone else replied to Connie Whiteman Slatt’s comment, saying that she too has a similar item.

She said that her aunt had found it in a thrift store in the Pacific Northwest: “Mine was iridescent and heart-shaped like this one, but much less ornament and more suncatcher-like. It was made from the ash of Mt. Saint Helen.”

“This could also explain what appears to be ashes enclosed within… could be a possibility,” wrote a woman who goes by the nickname ‘Cat Willow VII.’

So, perhaps the glass heart is not an urn after all? Hopefully whoever donated it to Savers will come forward and reclaim it. The viral story is still going strong – hopefully the secrets of the blue heart will still be revealed.