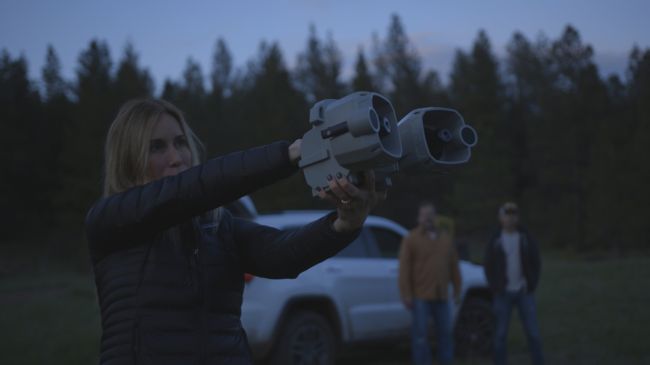 A team of researchers is sitting quietly, going over their instruments. It’s night in the forest and they are looking for any signs of life in the dark forest. While looking at the infrared hear sensors, one of the men notice a red blob on the monitor. Could this be the proof they’ve been looking for?

There have been thousands of sightings of Bigfoot and similar creatures throughout the world. In the US alone there have been more than 10,000 sightings over the last 50 years. Most of the sightings report a tall, hairy or fur-covered, ape-like humanoid. It also came to light that the FBI themselves have a file on this legendary cryptid. The file was released to the public and in it, there was information about several “bigfoot hairs” that were tested to identify. According to this file, the hairs were nothing more than “of deer family origin.”

Large ape-like creatures have existed on earth, however. In southeast Asia, there once lived a creature call Gigantopithecus. This ape-like creature stood almost 10 feet tall and weighed almost 600 pounds. Unlike creatures such as the wooly mammoth that made their way to North America during the last ice-age, Gigantopithecus never wandered that far. Even so, the idea of there being a hidden population of an unknown species of primate hidden in the forests of North America is not beyond the realm of possibility.

Over the years there have been numerous sightings, and supposed pieces of real evidence found. Many expeditions have been made over the years to try and find proof of this creature. This latest expedition is for the Travel Channel’s new documentary series called “Expedition Bigfoot” The team is comprised of a number of specialists, such as primatologist Mireya Mayor and explorer Russell Acord. Using state of the art technology the team is investigating all the bigfoot sighting hotspots in the hopes of finding some concrete evidence to prove the existence of this fabled creature.

The team had examined many of the past eyewitness reports of Bigfoot sightings and they noticed that there was an amazing level of consistency in each report. All the reports describe a large, bipedal creature with primate-like behavior. During the investigation, the team managed to capture some footage which might just be some proof. “And when we were in the field, we were able to capture something on video that fits this description: very big and moving in an apelike — if not bipedal — fashion,” Mayor said. “That, to me, is probably the most compelling piece of evidence that I’ve seen so far.”

The answer to the Bigfoot mystery may remain a mystery for a long time still, but investigations like those done by the “Expedition Bigfoot” team bring us one step closer to the day when the answer gets revealed at last.