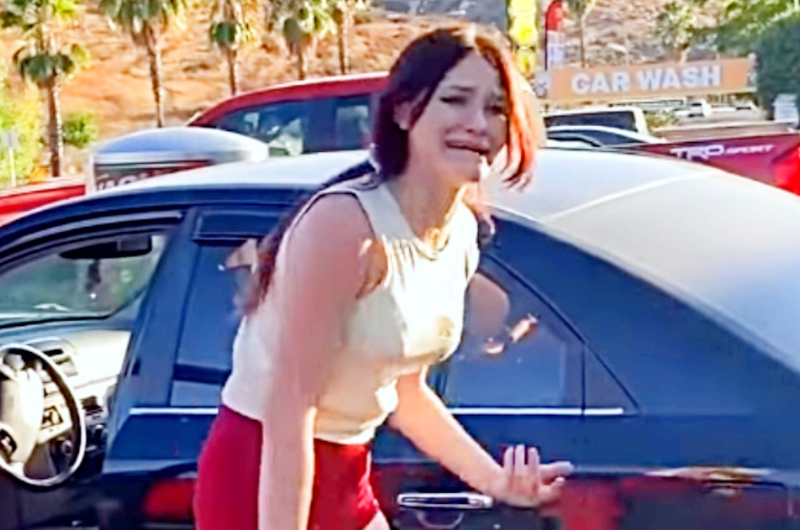 The only thing he could do was stand there in utter shock as the giggles and snide comments continued to bounce off the walls.

How would anybody think any fraction of this was decent human behavior? What should have been a quick, simple errand was now a frazzling choice – to walk away or to teach these people a lesson in manner.

Friday evening donuts had always been a long-standing tradition for Hunter and Lara.

It had begun when they first started dating. But now that Lara was pregnant, it was a “gimme donuts or someone dies” situation. Cravings for sprinkles and jam filling exploded into a full-tilt meltdown one evening. This craving had to be satisfied no matter what. But they would quickly run into a problem that would spark an entire ordeal.

As strange as it sounded, the craving escapades were the epitome of drama for these straight-laced lives.

They were very much a five-t0-nine then bed by eleven sort of couple. It suited them. Drama came from their television, not the world. They hated bringing stress and getting it. Out of their entire friend group, they would be the last people anyone would imaging causing havoc and tears … while smiling and laughing the entire time.

Hunter and Lara had been sprawled out across the sofa for hours.

Their busy schedule didn’t even leave time for them to go grocery shopping. The only thing edible in the cupboard was the last box of cheddar flavored popcorn, which Lara said make her “yak”. Hunter’s belly was also ravenous for something substantial. He jumped up, grabbed the car keys, and declared, “We’re getting some Boston Creams.” There was just one problem.

This quiet neighborhood wasn’t open during late hours, not like downtown.

It was 8:30 and they could make the closest shop if they hurried … and maybe broke the speed limit here and there. What had started as a dream of deep-fried, powdered dough was now a fully formed, desperate craving within Lara. Someone was soon going to learn what it meant to come in between a pregnant lady and her need food, and it wasn’t going to be pretty.

It was supposed to be Madeline’s Bakery on 5th and Jefferson.

Hunter could see the saliva accumulate around Lara’s lips, like a Bloodhound inches from a juicy sausage. However, as they pulled up to the dainty café, the sign on the front door made them both let out a pain-filled sigh. The blinds were drawn and the lights inside were out. There was a handwritten sign taped to the front door.

Hunter swore they had another hour before closing.

But the sign said they had closed early because of a family emergency. Pregnancy hormones exploded and Lara’s eyes started to well up with shimmering tears.  He couldn’t let things end there. There had to be something open. He pulled out his phone and searched for alternatives. He had no idea the drama waiting at the next stop.

Hunter sped through the dark streets, hoping there were no speed traps or enthusiastic cops waiting to fill their ticket quota.

The next shop was definitely open – inside was filled with bright lights and people … so many people. It seemed they weren’t the only ones who thought late-night donuts were a good idea. There were only a few minutes left until closing.

The shop was very popular, but the parking lot was tiny.

The entire thing was filled to the brim, except for one spot that magically appeared. the Parking Gods were smiling on them today! Hunter turned on his signal and started maneuvers to back into their miracle slot. There was no sign in his rear-view mirror that disaster was inches away. It started with a loud honk.

Like a vulture swooping in for food scraps, a small car filled with young, loud girls swerved into the open space and screeched to a halt.

Inside, he could hear whoops and cheers like they had just won some prize. Not only had they stolen the spot, but they had also nearly hit Hunter’s car. The hairs on his neck stood straight. They rolled down the window to tell them off, but got something unthinkable in return.

“Excuse me, we were just backing in,” Hunter called out to the girls, trying to keep calm.

“Too bad. Your name wasn’t on it,” the young driver replied with a nasty, smug smirk. The girls piled out and laughed in his face as they walked past. Stunned by the rude girls’ audacity and blatant disregard for anyone else, he told Lara to scoot over and take the wheel. Still seething, he directed her to pick him up at the donut shop in five minutes as he ran to the bakery on foot.

The delicious smell of fried dough and icing hit him as he walked in, with his mouth watering now that he was so close to finally getting what he’d driven all the way here for.

But the bakery was absolutely packed. Hunter watched the shelves of donuts emptying as person after person in front of him scooped them up. He had almost forgotten about the rude girls as he prayed that there would be two donuts left when he got to the front. Then, someone jostled him from behind.

Hunter felt his jaw clench as someone rudely jostled and crowded behind him — so close to him that he could feel hot breath on his neck.

Balling his fists and with his sugar-low only aggravating his irritation, he heard a voice from behind and immediately recognized it and his eyes narrowed. It was the girl who had cut him off. He stood quietly seething until it was finally his turn. Suddenly, he smiled his sweetest smile at the cashier and took his revenge.

They Didn’t Notice Him

He whipped his head around quickly, but the girls were prattling so loudly at each other that they didn’t even notice him.

“Thank God we got a parking spot,” one said before they all erupted with screeches of laughter. Their voices grated on his nerves, but he composed himself, checked his wallet, and cleared his throat. It was time for their comeuppance.

Hunter savored the satisfying rush as he pulled out his card and made his order.

As the cashier filled his box, the jeering came to an abrupt halt. If steam could come out of human ears, the young woman behind him would have been a whistling tea kettle. Her face had turned bright red and her hands into tight fists.

“I’ll take them all,” Hunter said loudly so that the girls could hear, “…all two dozen donuts.”

That had gotten the entitled girls’ attention. The rude driver, voicing her displeasure at not getting what she wanted, began to have a tantrum like a spoilt child. “What, you’re not even going to save a few for us?” she petulantly yelled at the cashier, “He can’t do that! We’ve been waiting!” That was exactly what Hunter had been waiting for. He knew her type. He whipped around with childish glee and couldn’t contain himself. It was too poetic.

“Too bad. Your name wasn’t on it!” Hunter smugly shot back.

And the look of thunder on the girls’ faces almost made the entire annoying ordeal worth it. He paid, grabbed his bag of donuts, and sauntered past the awful teenagers — with a spring in his step and a satisfying sense of justice in his heart. Little did he know, his partner-in-crime wife, who he had left in the parking lot, was bust serving up an extra helping of justice.

Hunter waited for Lara outside the bakery, but she was nowhere in sight.

He took his phone out of his pocket and called her. “Where are you?” he asked cheerily. “In our parking spot,” she replied, giggling uncontrollably. Hunter was confused for a second, but then it dawned on him. He walked up to the girls’ car. And, sure enough… there was Lara. He began to bellow with laughter.

Hunter walked up to their car, laughing maniacally.

He leaned in and gave his wonderful wife a kiss through the open window when he saw what she was doing. What had she done? It turned out that Lara had indeed found their parking spot – right behind the Mini Cooper. But things didn’t end there.

Lara had parked their car right behind the girls’ car, effectively parking them in.

Hunter told her what had happened in the bakery and she laughed so hard she snorted. Then, she revealed her idea for revenge. But before she could finish, she was interrupted by an angry honk. It was the gaggle of rude girls, donut-less and fuming. And when they realized what Lara was doing, they were dumbstruck.

His wife was already a force to be reckoned with.

But someone had tried to come between her and her cravings. This meant war. Another loud honk came from the small car and the girls yelled for them to move. Lara grabbed a strawberry jelly and stuffed it into her mouth. Hunter knew what to do next.

He settled into the passenger’s seat, selected an old-fashioned glazed, and crammed it into his smiling face.

He pointed to the box and then flashed the thumbs up. So good. The couple giggled like silly kids as the other car exploded with petulant rage. Which just made them laugh all the harder.

Hunter and Lara sat giggling like a couple of teenagers and rolled up their windows, ignoring the furious hooting and the catty girls’ indignant cries.

Hunter handed Lara a jelly donut from the bag, and she could have sworn that she’d never tasted anything sweeter. They leisurely ate two donuts each, enjoying the spectacle behind them and reveling in the mischief they’d caused. Revenge had never felt so good.

When the last bites went down and fingers were licked, they finally pulled away and let the Cooper squeal down the road.

It was far more donuts than they needed, but it was totally worth it. The last hooray came when they spotted a police car pulling the girl over for her speedy departure. Best night ever.