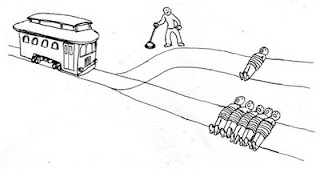 It’s a beautiful day, and you’re walking along the trolley tracks. Suddenly, you hear calls for help and notice there are five people tied up on the tracks just ahead! A trolley is bearing down on them, and it’s brakes have failed…

You find yourself next to a lever, where, if pulled, it will divert the trolley safely away from the five trapped people. But there’s a catch: there’s a man standing on this diverted track who is completely unaware of what could happen, and he can’t hear you or see you. If you pull the lever, he will die, but you will save the other five. If you don’t pull the lever, the five people will surely die. What will you do?

Now consider the same problem with a twist.

You find yourself walking along a trolley track again, and again you notice the trolley is out of control. This time, there is no divert-able track. Instead, there is a very large man standing within arm’s reach who is between you and the track. If you were to push him, he would fall onto the track and stop the trolley, saving the five people. Unfortunately, he would die. What will you do?

On the surface, the consequences of both actions are the same: one person dies, five survive. More specifically, in both examples five people live as the result of one person’s death. At first, both may seem to be justified, but most people, when asked which of the two actions is acceptable (pulling the lever or pushing the man onto the tracks) agree that the former is permissible, the latter is not. What’s the difference? There appears to be a distinction between killing a person and letting a person die.

Why is one wrong and another considered acceptable when both result in death? If a person dies in both scenarios, and both deaths directly result from an action you take, what’s the distinction between the two?

The queasy feeling you might have now is a result of an application of the doctrine of double effect, which says that you may perform an action that has negative consequences, but deliberately intending harm (even for good causes) is unacceptable.

The New Catholic Encyclopedia provides four conditions for the application of the principle of double effect:

1. The act itself must be morally good or at least indifferent.

2. The agent may not positively will the bad effect but may permit it. If he could attain the good effect without the bad effect he should do so. The bad effect is sometimes said to be “indirectly voluntary”.

4. The good effect must be sufficiently desirable to compensate for the allowing of the bad effect.

A practical example of the doctrine of double effect applies to the act of war. For example, is it acceptable to bomb a city to end a war quickly (where thousands may die), knowing that many innocent civilians will also die?

The Trolley Problem and other thought experiments are an integral part of moral philosophy. They force us to consider scenarios that are seemingly far fetched, yet have real-world applications.

So what would you have done?