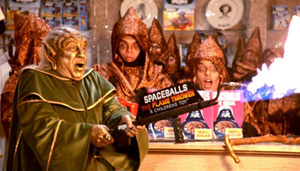 Top Aliens We’d Like to Have a Beer With

There’s nothing like a cold brew to end the day; unless it’s a cold brew while watching your favorite sci-fi flick. Hmmm, aliens and beer, now there’s a thought. If you could meet anyone you wanted for a beer, who would it be?

So what if Vulcans were one of the primary founders of the Federation and they’ve mastered logic. I just want a chance to grab Spock and pour a pint of Rochefort 10 down his gullet to see if it peps up his copper-based blood. I’ll match his intellect against that 415-year old Belgium recipe any day. Can you say live long and pros… HIC… pros… HIC… do well.

If the Tanner family could part with him for an evening, I’d hang out with this rude, obnoxious, arrogant alien from the planet Melmac. His endless sarcasm cracks me up. Maybe find a nice BBQ joint to have a beer instead of a bar or pub. That way I can enjoy some spicy rib tips and fries; and maybe we can tip the cook enough to cut up a few ally cats for old Alf.

Ok, I’m not talking about Pre-1980 Lt. Boomer. I’m specifically referring to the 2003 to 2009 dark hair, dark eyes, perfect skin, heavenly smile Lt. Sharon “Boomer” Valerii. Yes, I realize she’s a Cylon. Yes, she tends to shoot humans, but considering she’s a sleeper agent and has to follow her programming, I just can’t hold that against her. I don’t know what kind of conversation we would have, or if Cylons can actually get tanked, but I’d settle for sitting there and smiling at her for a couple hours.

Having a beer with Paul would be akin to hanging out with my old college buddies, only a hell of a lot funnier. First off, I think he’d appreciate the beer more than any other alien on this list and his no BS insights about our world would make me laugh so hard, I’d have to run to the can before I wet myself. Granted, the authorities would eventually show up and try to drag him back to Area 51, but it would be a blast while it lasted.

Crap, it would be a blast to hang out with ANY of the Autobots. Not only would the drinking be cheaper (because they consume energon, not alcohol), but when you were done, you wouldn’t need to call a cab—they could transform into a plush vehicle and take your sorry, drunk butt home. My goal in the conversation would be to learn some automobile language, so I can sweet-talk my Ford truck next time it decides not to start.

Do I really have to qualify this? I mean, come on… have you seen this woman?

Sure, Jabba might need to kick back a few kegs to get a buzz, but you have to admit, the guy knows how to throw a party. Live bands, scantily clad women with really big… brains, flesh-eating monsters and henchmen on the payroll to keep the cops off your back. He’d be a great one to get some feedback when it’s time to make corporate cutbacksat work, if you know what I mean.

Hands down, the Doctor would one of my favorite aliens to have a beer with. Think about it, not only would you have 11+ lifetimes to question him about; he could take you anywhere, anytime, to have any kind of beer you wanted! Mead, Ogron ale, Fisherman’s Ruin, Cider, and the possibilities are endless. Few aliens have more personality than this Gallifreyan, not to mention his unequalled wit and insight. Frankly, I’d love to get him so pissed (drunk) he’d tell me about the great Time War in detail. Just make sure to spike whatever you offer him with Ginger Beer, it dramatically lessens a Time Lord’s tolerance to alcohol and should make for a more entertaining conversation.

When I’m going out for an intergalactic bender in my local cantina, I want a wing man who’s the best of the best. Han Solo is one of the greatest intergalactic smugglers and playboys in the galaxy and Chewbacca has had his back as long as anyone can remember. It’s been said that behind every great ladies’ man there is an even greater wing man. Whether you need protection from smugglers looking to collect on their debts, or you want a big hairy beast to make you look good in front of the ladies and possibly “take one for the team,” then reach for the greatest wing man of all time, Chewbacca. 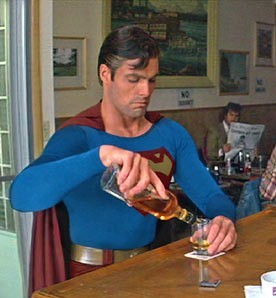 I’d love to sit down over a few beers and pick Superman’s brain. Why are you so willing to fight for us crappy Earthlings? What does a superhero, who is pretty much invulnerable, do for a rush? Seriously, why the cape and tights? Could I out drink the man of steel? And once he did get a bit tipsy, I’d do my best to goad the son of Jor-EL into some seriously superhero-sized super pranks.

Yogurt is an alien of many titles–Yogurt the Wise, Yogurt the All-Powerful, Yogurt the Magnificent, Keeper of the Schwartz—yet when it comes down to it, he’s just plain Yogurt. With all the heady responsibility that comes with being a keeper of the Schawartz, it’s refreshing to see a man of such great heights who’s able to relate with the common space folk on their level. Cheers to you, Yogurt, and may the Schwartz be with you!

So there you have it. what alien would be your first choice to have a beer with?

Greg Buckskin is currently re-reading the Dune books for the3rd time and dreams of the day someone makes a Dune anime series. In his day job for CableTV.com where he gets to put his seemingly useless pop culture, TV, and movie knowledge to good use making awesome infographics.