Some creatures have long fascinated and almost tormented humanity. These mythological creatures have not yet actually been discovered and it is long disputed by zoology because of the entirety of the claim with complete lack of evidence. Examples of cryptids are unbelievable creatures such at the Yeti, Loch Ness Monster and the very well known Big Foot. However, unbelievably there is an entire field of dedicated professional hunters who wish to research these creatures and its known as cryptozoology.

Cryptozoology And The Cryptids It’s Based On

Cryptozoology is the study of animals documented through folklore. Although there are people who fully believe, it is considered a pseudoscience. Basically, pseudoscience is believed to be fake. However, each year, animal experts discover different species. So who’s to say that these beasts don’t exist? There are arguments supporting the existence of cryptids in some shape or form throughout history.

The Origins Of The Cryptid

Have you ever questioned why cryptid legends run so strongly throughout folklore and myth? Furthermore, have you ever noticed the similarities which run in ancient creatures from continent to continent? A strong belief in cryptozoology is that cryptids are merely animals from another time. Take into consideration the coelacanth. This fish was believed to be extinct for 66 million years. Then, in 1938, fishermen off the coast of South Africa saw something strange in the water. The ginormous fish took them by surprise. When they reeled it in, they had no idea what it was. It was only when they took it to be examined that it was found to the supposedly extinct coelacanth. So, if that could exist, what could other monsters be?

Big Foot is probably one of the most loved cryptids known to man. However, there is actually an extinct creature that could easily pass as a sasquatch. The Gigantopithecus Blacki was the largest documented ape to ever roam the earth. Fossils show that this creature stood 3m tall. It has been estimated to look like an abnormally large gorilla or orangutan. Sound like a Big Foot we know?

The Loch Ness monster has long plagued the minds of cryptid believers. This mythological creature was a water beast, found in Loch Ness of Scottland. It is reported to have a long serpent-like neck with a small head. But what if we told you this was nothing more than a prehistoric whale? Recently in Antarctica, the skeleton of an Elasmosaur was discovered. This creature spanned an impressive 10.3m long. And the remains of the animal fit the brief of the Loch Ness monster, and other reported lake beasts, quite aptly.

The Chupacabra is a South American creature known to plague farmers and their livestock. It is reported to be a vampiric dog-like beast which drains livestock of their blood. The name, Chupacabra, literally translates to goat sucker. However, in recent years, the mystery to the Chupacabra has supposedly been solved. It is believed that the mythological creature is, in fact, a wild dog with severe mange. Once again, the description of a mange infested coyote or wild dog fits the brief remarkably well. Chupacabras have been reported as dog-like or reptilian creatures. Severe mange will cause a dog’s skin to appear leathery and scale like. Dogs suffering from mange also have an increased thirst and hunger. The infection leaves them slightly delusional. Now, doesn’t that sound like a Chupacabra to you?

If Your Interest In Cryptids Has Piqued

If you now need to know more about the weird and wonderful animals that could be lurking out there, read on. this infographic will help you understand what kinds of creatures you could expect near you.

Click each infographic to see a larger, more legible version. 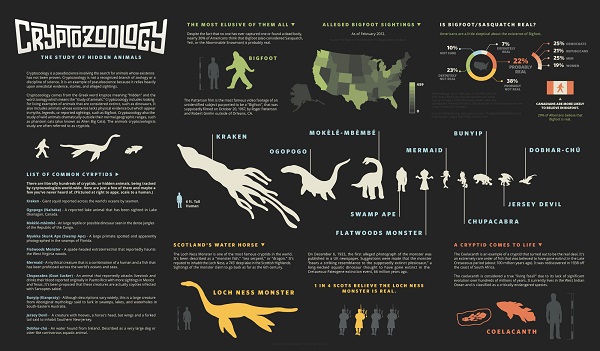 Anthology of Mythical Creatures from Around the World 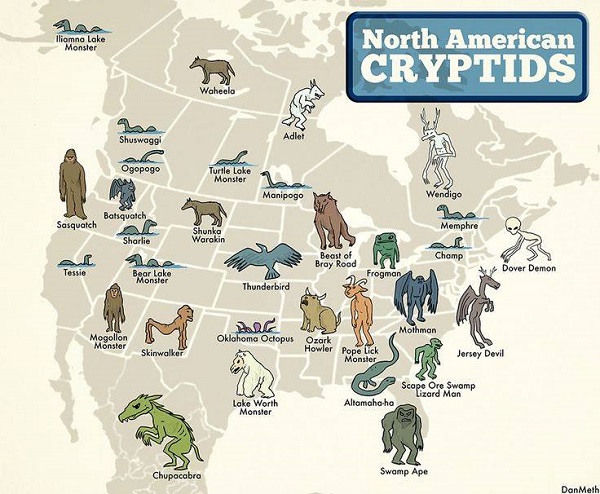