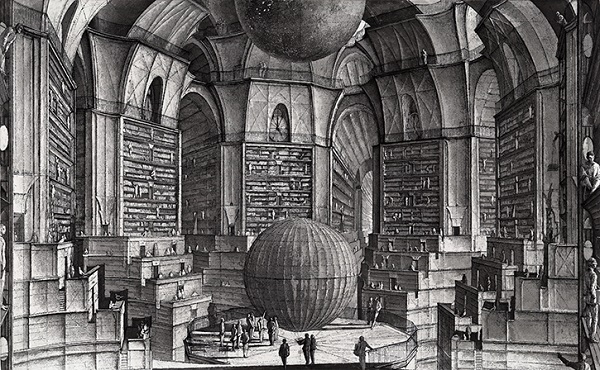 “The Library of Babel” is a short story by Jorge Borges which was written in the 1940’s and translated to English in the 1960’s. It tells the story about a library that houses all the possible combinations of the letters of the alphabet, plus some punctuation, in 410 page long novels.  The librarians are incredibly excited about the endless possibilities the library presents to them. The tomes essentially contain every one’s death, birth, all written books, and all yet un-written books. The problem with all of this, however, is the enormity of the library.

Its scope is beyond human imagination. The books aren’t organized in any meaningful way, so one cannot simply move from one to another in the same stack and learn something else interesting about a topic. And, because of the vast size of the library, almost all of the books are complete gibberish.

The librarians in the story grew suicidal and started to grow desperate. They start burning books they believe to be worthless, and believe very strongly in finding a book that would categorize the contents of the library into something that made sense. It would have to exist, after all.

The Library of Babel is a temptation of knowledge, the promise of foresight, but ultimately only acts as a morbid reflection of what a library is. Instead of a collection of work that serves to enlighten, it houses the impossible infinite and yields an abyss that consumes those who wander into it.

Recreating the Library in of Babel Digitally

An artist and programmer named Jonathan Basile woke up one morning after reading the original short story and wondered if someone had recreated the library, digitally. He found that no one had, outside of some concept work where random letters were generated.

He began work on forming his own approach. He ended up with the libraryofbabel.info, a website that contains all possible combinations of 3,200 characters, or essentially, all possible permutations of any page that could ever be written or has been written. The pages are organized into books of 410 pages, to fit the theme from the original story, but aren’t cohesive works in themselves. It currently contains 10^4,677 books.

Basile had originally designed the site to generate all the possible combinations of 3,200 character pages and then return them when a user requested it. The data requirements made this impossible, where a million books were taking up nearly two terabytes of information. Without more powerful computers to scan the data, it wasn’t very efficient at all.

He realized he could take advantage of random number generators to still generate the text, and make it reversible so the “seeds” used to generate the pages were always the exact same. This enabled him to shrink the footprint of the site down and enable better and more accurate searching more akin to traditional search engines or library catalogs. The previous iteration of the search could only pull short phrases of one or two word matches, and not very many at a time.

This doesn’t invalidate the work, because mechanically, the end result is the exact same. The seeds are already all generated and noted, when a user searches for a string of text or a passage, it simply runs the algorithm backwards to generate the page. The page was already there before it was searched, it just wouldn’t be… feasible to find through random page diving.

The forum on libraryofbabel.info discusses some philosophical ideas and potential repercussions on the site. One user asks Basile if there are any issues with copyright or plagiarism violations, since an author’s entire work exist in one form or another on the site, as well as work that haven’t even been written yet. Basile claims the site most likely falls under fair use, since the work wasn’t penned there and wasn’t generated with intent for commercial use.

Basile assures users of the library that the text isn’t saved from search strings and then displayed to the user to give the simulation of an unlimited library. Since the locations are permanent and based on the seed created from a random number generator, they can be replicated endlessly without a need to save the original data. Saving the original data would be impossible, because of hard, physical space limitations of the physical universe.

Take a look at the site’s search function. Type in some personal journal entries you’ve written down elsewhere. Sections of your favorite book. A description of your death or birth.

If you’re feeling extra brave, jump through random loops and see if you can find anything decipherable. One philosophical issue with the search function is because it is “perfect”: you can only find what you’ve already written down.

With all written work already created, is there a difference between intent and execution? Is the fundamental idea behind a thought different than the end result? Get lost inside the stacks.