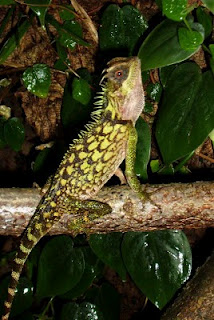 Deep within the Cambodian jungle lie the magnificent ruins left by the Khmer empire, including the temple of Angkhor.  The structures were built in the beginning of the eighth century AD until the fourteenth century AD.  The artistic skills of the Khmer are evident throughout the complex: most notably, their reliefs, carved into the stone surface of the walls and buildings. 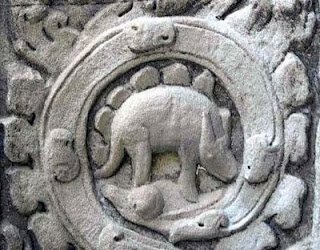 One particular relief displays a number of animals:  what appears to be a monkey, a deer, buffalo, parrots, various swans, a gecko lizard, and… a stegosaurus!

Hold the phone: if an artist was able to carve a stegosaurus, the he must have seen one with his own eyes, and therefore, this is amazing evidence that humans and dinosaurs actually coexisted!

Or so the folks over at Bible.ca claim.

The reliefs of the other animals are not necessarily easy to identify.  The “swans” could be any related species.  In fact, had the author not pointed out that it was a swan or water buffalo, I wouldn’t be able to identify either.  In fact, I would only go so far as to say “a bird with a long neck that looks like a swan”.  The dinosaur in question, at first glance, looks like a stegosaurus.  Or does it?

“A few skeptics have based their objections on anatomical differences between popular Stegosaurus restorations and the Cambodian sculpture. The fact that the average Jr. High student immediately identifies the sculpture as a Stegosaurus is considered of no consequence. “The head is too large Stegosaurs had no horns or frills on the head” The sculpture has no spikes on the tail… Therefore, they conclude that the sculptor never saw a Stegosaurus.” 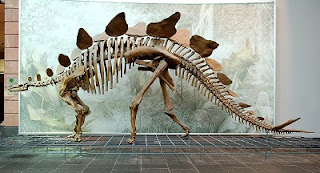 The creature in the relief, except for the “plates” (which we can’t even prove are plates – they could be decoration behind the animal, since many of the other animals have similar decorations) doesn’t really looks like a stegosaurus. The head is too large; the spikes on the tail are missing; the carving shows two giant horns or frills above the eyes; and the front legs are the same size as the back legs (the front legs of a stegosaurus are much shorter). 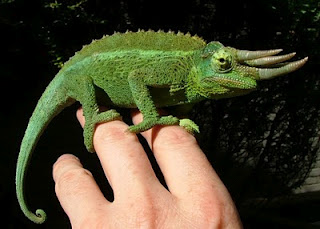 As many other bloggers on the Web point out, the carving looks like a chameleon, which are incredibly fascinating reptiles. One could see how a color-changing creature could earn its way onto a temple wall. If you spend enough time on searching, you can find a better match than the one in the image to the right.

Or it could be another lizard altogether. ‘Acanthosaura’ is a genus of lizards commonly known as ‘mountain horned dragons’, or ‘pricklenape agamas’. They are so named because of a row of dorsal spines which run down the back of their neck. They are arboreal lizards that are found in Southeast Asia.

A quick invocation of Occam’s Razor once again provides us with a simple solution: it’s not a stegosaurus, it’s some other native animal to Cambodia.

Stegosaurus lived between 150 and 145 million years ago, in the Late Jurassic period. The fossil record does not yield any more stegosaurs after their extinction. It is an extraordinary leap to assume that one carving of a barely identifiable creature is a stegosaurus, and an even bigger leap to then suggest that dinosaurs coexisted with humans, thus “proving” Creationism and a young Earth.

As a child, I wanted to be a paleontologist. Jurassic Park was the best book ever, and the movies were fantastic. I would be thrilled if the carving was that of a stegosaurus. But, unfortunately, one anomaly does not disprove a massive convergence of evidence to suggest that dinosaurs (all dinosaurs) went extinct about 65 million years ago and never, ever, coexisted with humans.
Even the folks over at the GeoChristian blog don’t buy into the story:

“In conclusion, to use the Ta Prohm carving as evidence that humans and dinosaurs lived together only a short time ago is bad apologetics. This is one more thing to make us look silly in the eyes of nonbelievers. Don’t feed this to your kids, and don’t use it to try to convince anyone of the truthfulness of Scriptures.”

And besides, if you’re still on the fence: the carving could be a fake, created in recent history.

The temple has been used in the Lara Croft Tombraider movies, after all.

http://commons.wikimedia.org/wiki/User:EvaK
Must Read
Genome Studies Manage To Find A New Branch Of Fungal Evolution
European Space Agency Budget Increases By 10 Billion For The Next 3 Years
Artemis 1 Finally Launches: What It Means For Space Travel And Exploration