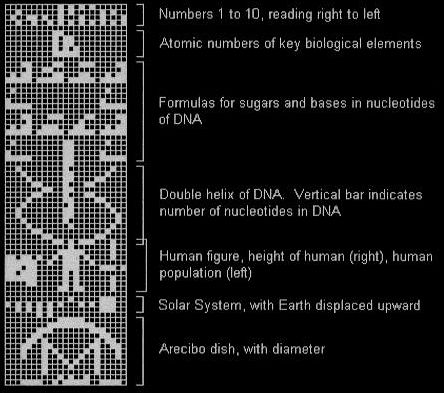 In 1974, the Arecibo Radio Telescope beamed a powerful broadcast targeting the globular star cluster M13. Containing roughly 330,000 stars, and at a distance of 21,000 light years from Earth, the blast would be strong enough to be detected by an alien M13 civilization’s own version of SETI.

Dubbed “The Arecibo Message”, it was sent pictorially as a set of 1,679 bits, arranged into 73 rows with 23 characters per row, which are both deliberately prime numbers (the intent being that aliens could use these prime numbers to help decode the message). The bits were transmitted by frequency-shifting at the rate of 10 bits per second, and the total broadcast was just under 3 minutes.

The message will take approximately 21,000 years to be received, and then 21,000 years to be returned back to Earth – so the probability of “contact” or “communication” is extremely low. However, as a thought experiment, it is interesting to think how an alien civilization may attempt to decode Earth’s message. On the Arecibo Wikipedia article, an explanation is given for each section in the pictorial.

For the message to be decoded, a number of assumptions must be made:

There’s no easy way to send a message into space that guarantees a high probability that it will be decoded correctly. Of course, having Wikipedia explain each row and column helps, but the aliens will certainly not have that luxury. Any form of media sent into space will degrade over time, and the aliens will probably not have VCRs, CD drives, DVD, BluRay, or Flash drives…

So, a radio message makes the most sense… however, I fear that, even if the Arecibo Message is received, it will remain encoded, hiding its mystery, must like many of the ancient texts from civilizations that are no longer here on Earth.