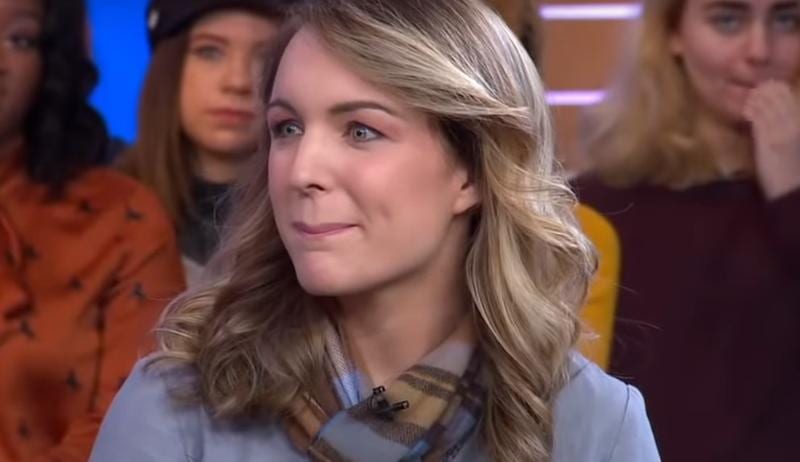 She could feel their eyes on her. She noticed the glances and the whispered conversations both in her classes and in the hallways. All eyes were on her. The girls were giggling about her outfit. She knew it wouldn’t be long before the questions started. And when they did, she would need to explain it all.

She didn’t realize that her simple decision would cause a stir worldwide. Everyone had the same question for her, and her answer would stun them all.

Get Dressed For Success 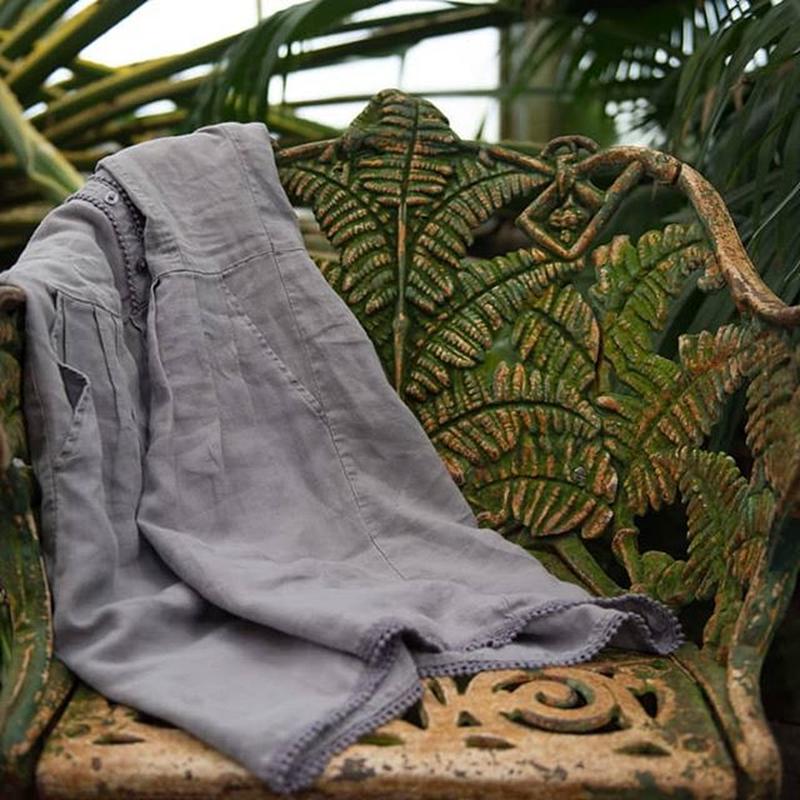 Julia Mooney, a 34-year-old art teacher, had just started a new job at the William Allen Middle School in Moorestown, New Jersey. She had carefully chosen her outfit for her first day. It was a brand new Jazmenia dress, pebble-grey in color. She had no idea when she ordered it that both she, and the dress, would become famous for the stir she would soon be creating.

She was excited and nervous for the next day. Starting a new job is always nervewracking and thrilling, but this was something more. She was on edge because she knew that everyone would be scrutinizing her. 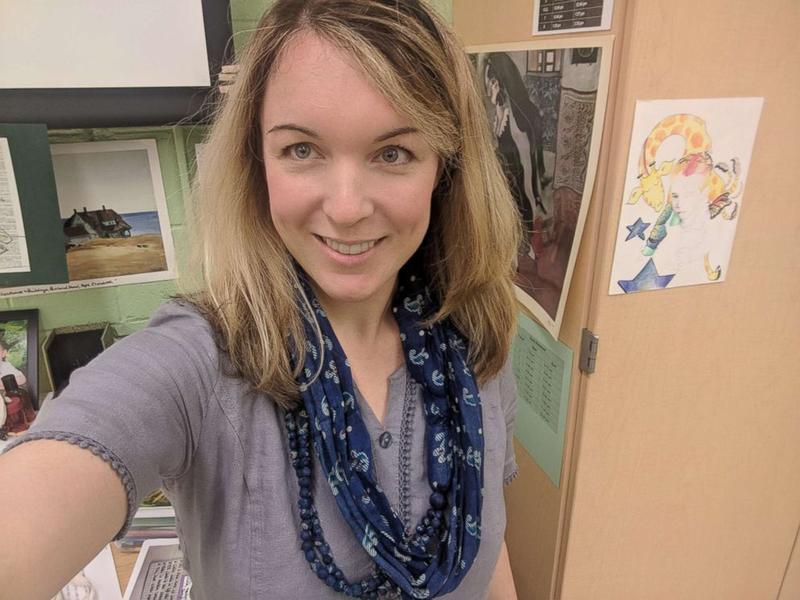 After the daily morning struggles of getting two toddlers prepared for school, Julia headed off for her first day. The dress had cost her a hefty $50, but fortunately, it fit her like a glove. Maybe she had been nervous about nothing. Everything was going well. She’d met her 6th and 7th-grade students and there had been no problems.

Until the temperature rose. She was not ready for that. 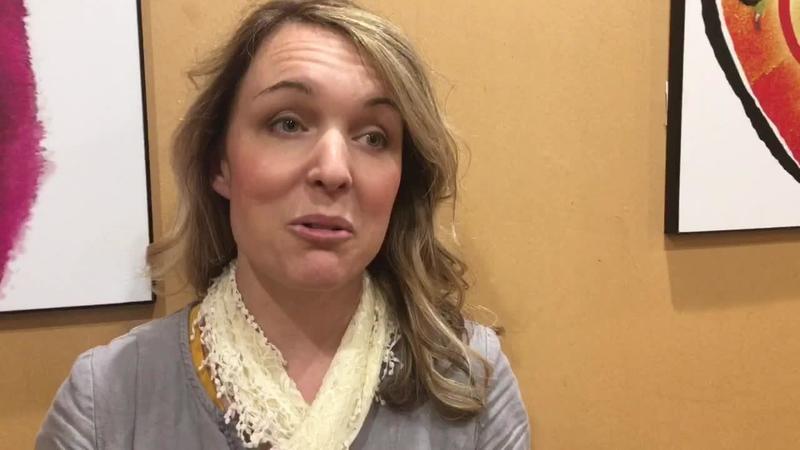 “Oh no… I’m sweating! The horror!” Julia thought as she realized her predicament. She tried to stay under the air conditioner, but it was of little help. She started to flush with embarrassment. She attempted to fan herself with a book in an effort to stay cool. She stoically continued to teach but she couldn’t help but think about the temperature.

It had already gone past the 90-degree mark. 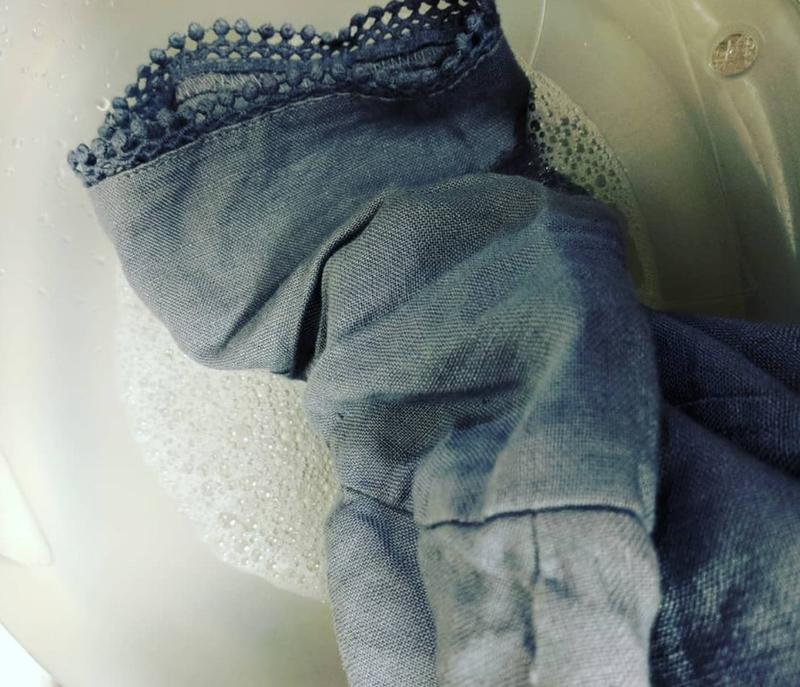 Each hour brought new students, new introductions, and new first impressions. She knew she had only one chance at making a first impression on each new 13-year-old that passed through her doors. Julia was somewhat despondent, however, as she felt that while she was making an impression on them, it was not a good one. At long last, the day drew to an end and she could escape to the refuge of her car. Her face was bright red as she felt her dress stuck like a cheesecloth to her wet back.

She took solace in the fact that tomorrow would be a new day. Once she was at home, she began to wash out the dress in the sink before hanging it up to let it dry. The next day, her pupils began to realize that there was something different about this teacher of theirs, though most of them couldn’t quite put their finger on it. At the age of thirteen, it is quite normal for girls to become more fashion conscious. They pay more attention to their own image and clothing as well as that of others, and they all want to wear expensive fashion labels.

This is why it wasn’t surprising that some of the girls had noticed the unusual thing about Mrs. Mooney straight away. 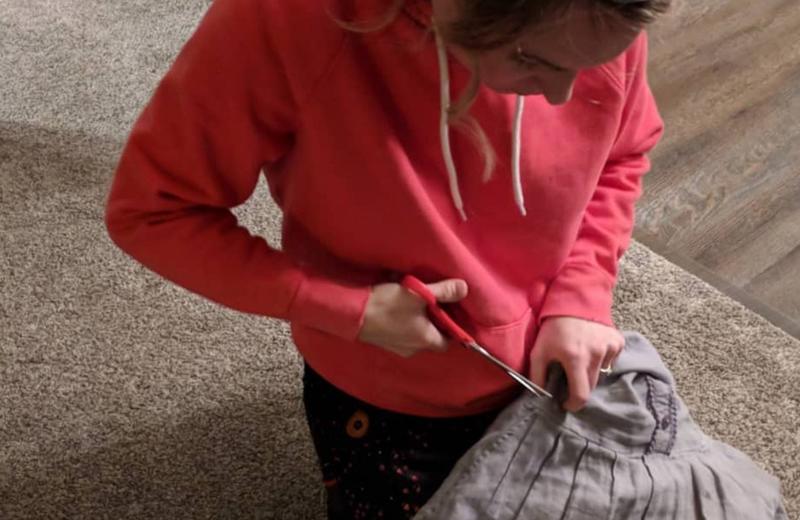 Julia made sure not to say anything about the situation even though she couldn’t help but overhearing the whispers, sniggers, and giggles wherever she went. And it wasn’t just the students who were noticing and treating her differently. Even many of her colleagues began to look at her in a different light. They tiptoed around the subject as if they were afraid she’d break if they said something outright regarding her outfit. All she could do was wait and keep doing what she was doing.

So, despite everything, Julia continued on undaunted. 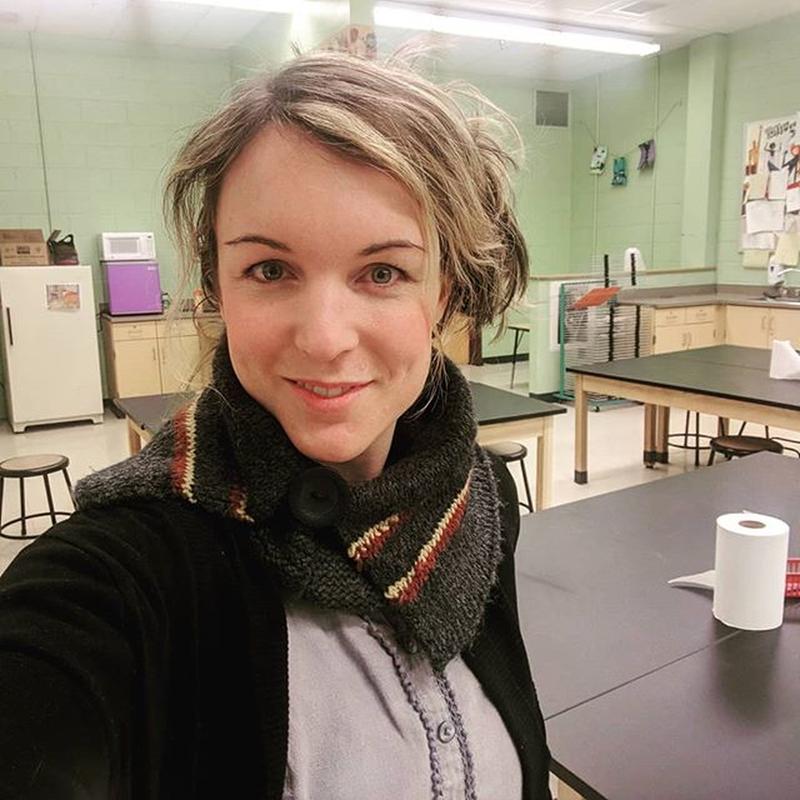 Three weeks into her new job and people could no longer keep it in. Their curiosity was bubbling over. Julia could see every face, dying to ask her the question she always knew was coming and had expected since her second day on the job. Everyone wanted to know why she was still wearing the same dress she wore on her first day. Was she going to take it off?

These were just two of the questions on everyone’s mind. 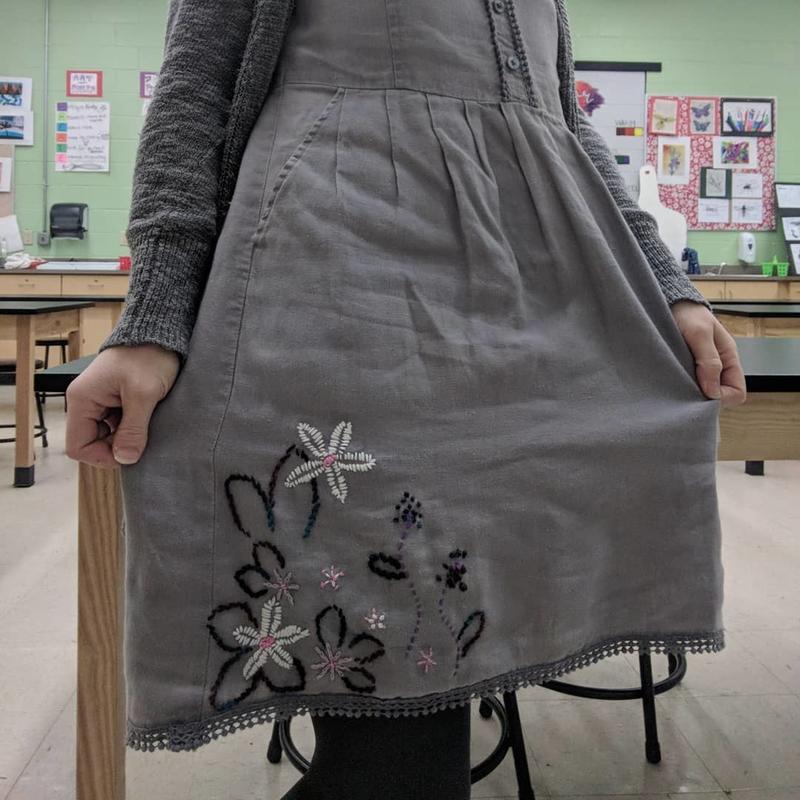 What no one knew was that Julia had a bold plan. Nothing had been unplanned or coincidental. There was a very specific reason why she was wearing that dress. “I’m walking down the halls and they’re like, ‘Is she still wearing that dress?’” Julia commented.

She was pleased to be getting all the looks and attention that she had been so far.

Love It When A Plan Comes Together As an explanation for why she chose to wear that specific dress Julia explained: “I needed to pick a dress that was going to be versatile because I’m going to be wearing it through the winter, and when we started the school year it was 90 degrees.” When her students finally asked her about the outfit, they received a cryptic answer.

Instead of explaining herself, she merely directed them to an Instagram page which she promised would hold the answers they were looking for. When her students looked at the first post on her Instagram account they saw a post that read: “For at least 100 days I’ll be wearing this dress, through ceramics projects, blizzards, whatever. Boring? Sure. I love to express myself through what I wear as much as the next American. This is a challenge.” This was all good and well, but it still didn’t give a reason for her doing that.

In fact, Julia didn’t have one good reason. She had four. 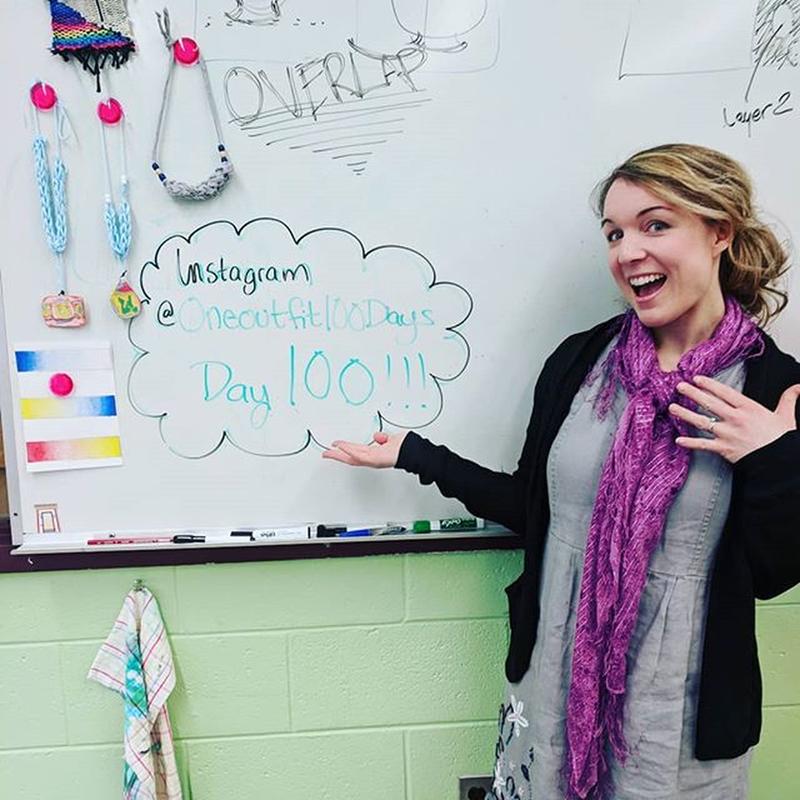 First and foremost, wearing the same outfit every day saved her a lot of time. As a mother of two toddlers, Julia’s mornings were always a hectic rush. Eliminating the uncertainty of what to wear each day gave her more time with her family.

She had even more profound reasons for doing this, and it would send a message to consumers worldwide. 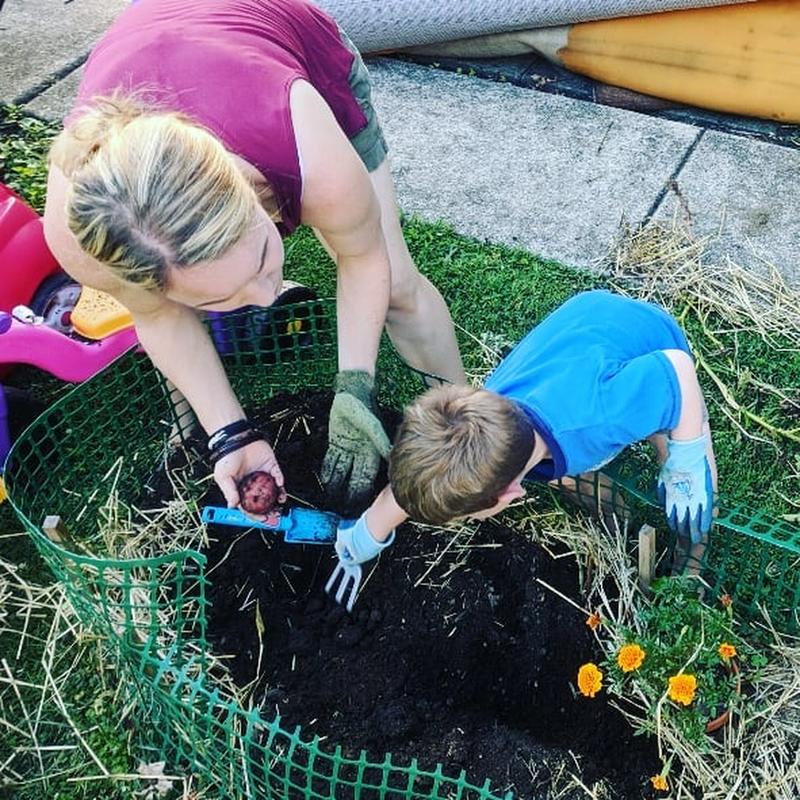 Julia strongly supports the ‘slow fashion’ movement. ‘Fast fashion’ is the typical, cost-effective, trendy but sadly not very long-lasting clothing and fabrics most of us are used to. Stores like H&M and Forever 21 are examples of places that sell ‘fast fashion’. “We demand lots of clothes cheap, so retailers have to produce in foreign factories where US labor laws don’t protect workers,” Julia explained. ‘Slow fashion’ is the exact opposite. ‘Slow fashion’ promotes the idea of high-quality materials and products, and fair practices when it comes to labor.

Julia is also trying to send a message about another, ever-growing, problem.

Rights Of The Workers Because of the high demand for clothes, massive amounts of clothes need to be produced as cheaply as possible. This often means having the goods produced abroad. Unfortunately, this often leads to unethical practices by companies. One such practice which seems to be on the rise is employing underage workers. To compound matters, in many of these countries, there are no laws in place to protect the children. Julia’s actions are an attempt to help slow the demand for those products and the need for cheap labor.

This may be her main reason for doing the challenge, but there is another important reason too. 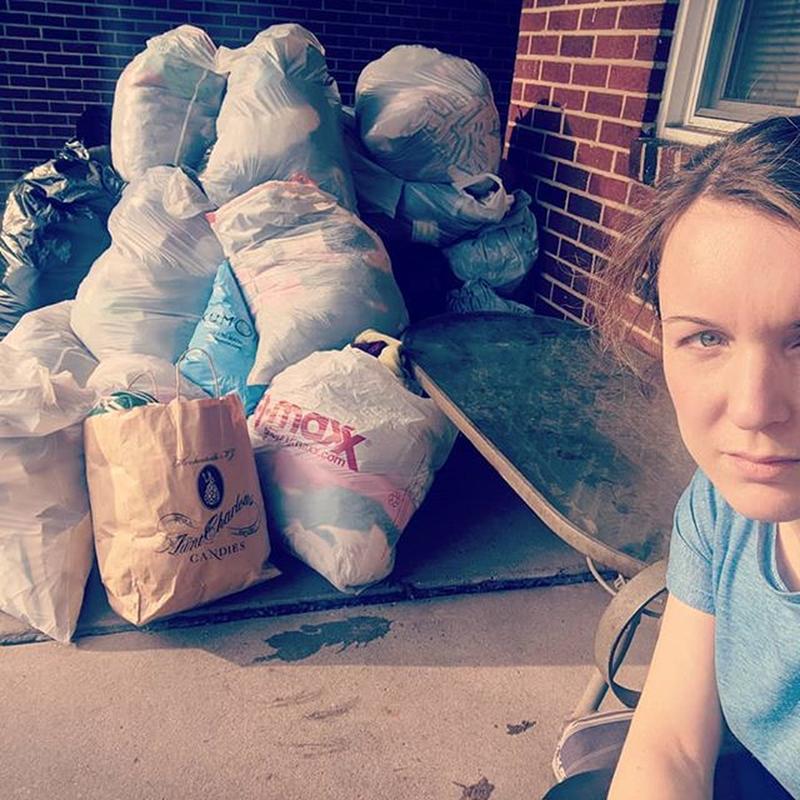 Another reason why Julia is doing this is to help combat the environmental impact of the fashion industry. The global demand for clothes is at an all-time high. This affects the natural resources of the planet, especially if companies don’t use sustainable practices. 713 gallons of water are needed to create a single traditional cotton t-shirt, but even though creating a polyester shirt takes less water, it produces twice as much carbon dioxide during the process.

Julia minimized her carbon footprint by choosing that specific dress. The dress is a fair-trade hemp dress from London-based clothing company ‘Thought’. But how have people reacted to Julia’s project? 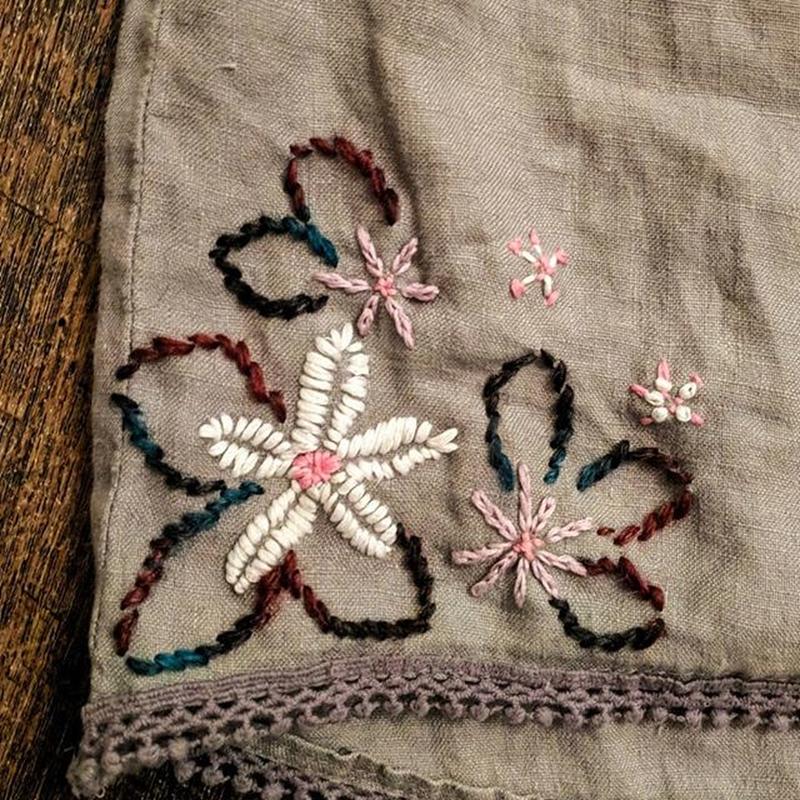 The reaction that Julia faced most was disgust. People assume that it’s an unhygienic idea. As Julia explains: “I just tell them: this is not a project about hygiene. I wash it as needed. I come to work clean. Lots of people wear uniforms and they are not assumed to be dirty.”

There is one very big thing that can be taken away from Julia’s challenge. 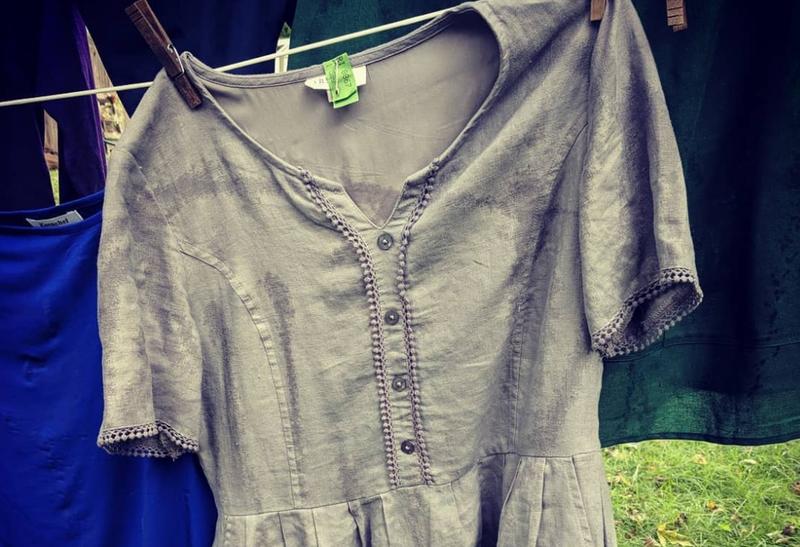 “Do we really need so many new outfits? Are we just perpetuating a culture that defines us based on what we’re wearing rather than what we’re doing? What if we spent our energy trying to BE good, interesting humans instead of trying to LOOK good and interesting?” Julia asks.

People worldwide were impressed by her message and gave their full support to her actions and cause. Julia’s Instagram gained over 6,500 followers practically overnight. One follower commented: “All for integrating sustainable strategies into everyday items, what a movement this teacher started!” Better yet, Julia’s pupils and colleagues started to follow her example too. 17 of her fellow teachers joined the cause. These included her history teaching husband, Patrick.

Patrick wore the same shirt for 100 days. It wasn’t long before the local media heard about this incredible story.

Are You Up To It? In an interview, Julia stated: “I like to wear clothes; I like to express myself… I know that we are all looking at what the other person is wearing.” She continued by saying: “To wear the same thing every day is uncomfortable because we have this deeply ingrained cultural expectation to change every day. It’s weird, but because it’s weird it’s making us all think.”

The big question, however, is do you think you could do her challenge and wear the same outfit for 100 days? What are your thoughts on Julia’s cause?