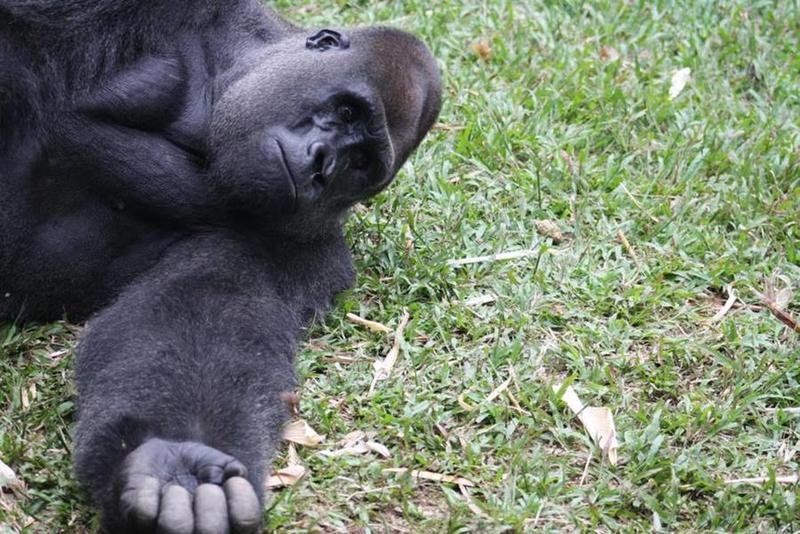 They had gotten used to Bobo’s behavior at this point, so when he started acting differently they knew they had to investigate further.

They needed to figure out what he was holding but none would dare get too close. When they finally realized what it was they were all surprised. Apes didn’t normally do this. 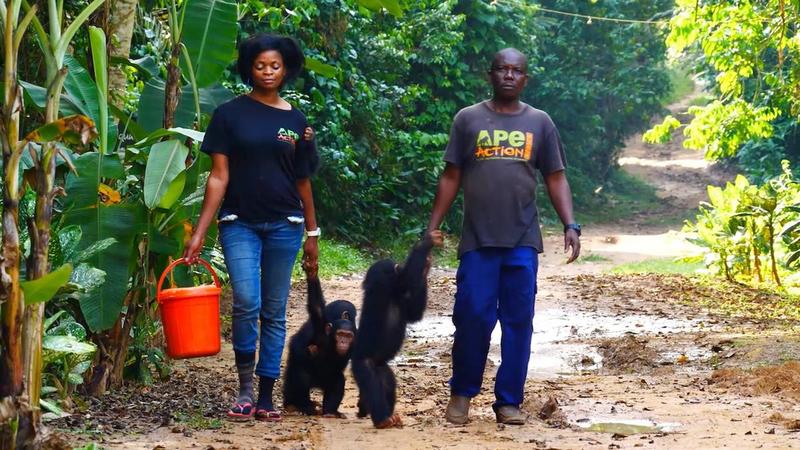 When Bobo arrived at the Mefou Primate Sanctuary he was only two-years-old and an orphan who had to watch his mother get taken away by poachers.

A few years passed and Bobo grew up into a full-grown adult and would be the alpha in the sanctuary. Now no poachers would dare mess with him. 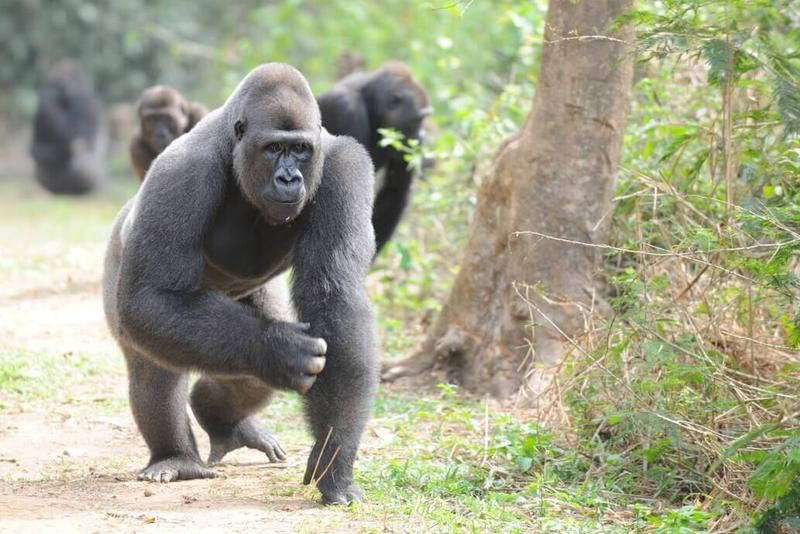 You’d think a gorilla weighing over 300 pounds would be quite imposing. But Bobo had a sweet side that he would show to all of the other apes and staff alike.

But all male apes seek to become the alpha and Bobo had made it to the top and wouldn’t let anyone dethrone him without putting up a fight. 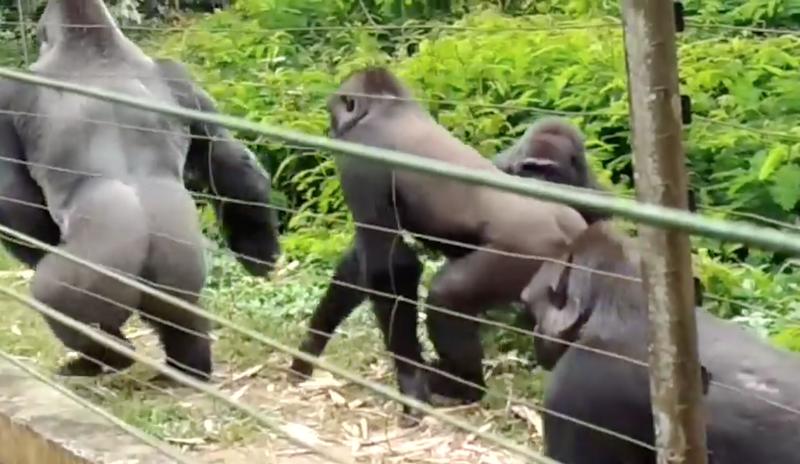 “Younger males Kibu and Nkamum once challenged Bobo for his position, they were never successful and no longer attempt to take control.” Bobo’s caretaker, Elissa, explained.

But when Bobo started acting out of character for an alpha male his caretakers grew worried. What was he doing? 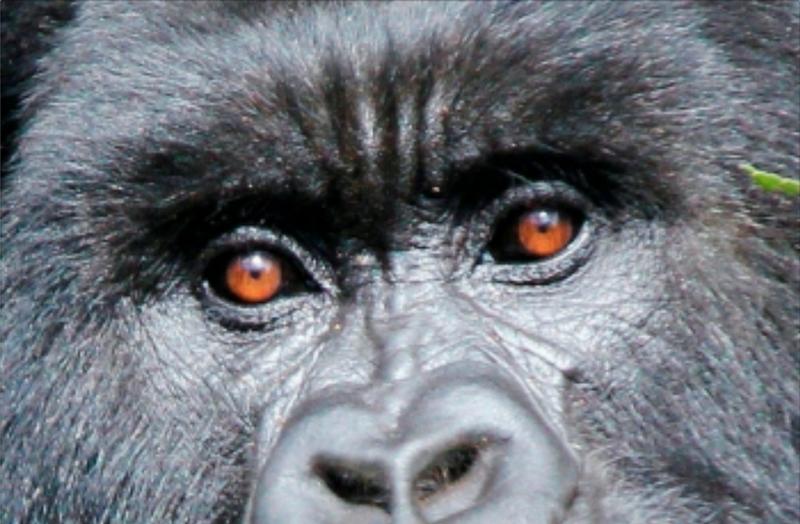 Ape Action Africa was the charity that funded the sanctuary which has over 300 apes and monkeys seeking sanctuary within its enclosures.

Elissa had raised Bobo and knew him well so when he was acting up she knew she’d have to watch him closely and make sure no other primates would be in danger. 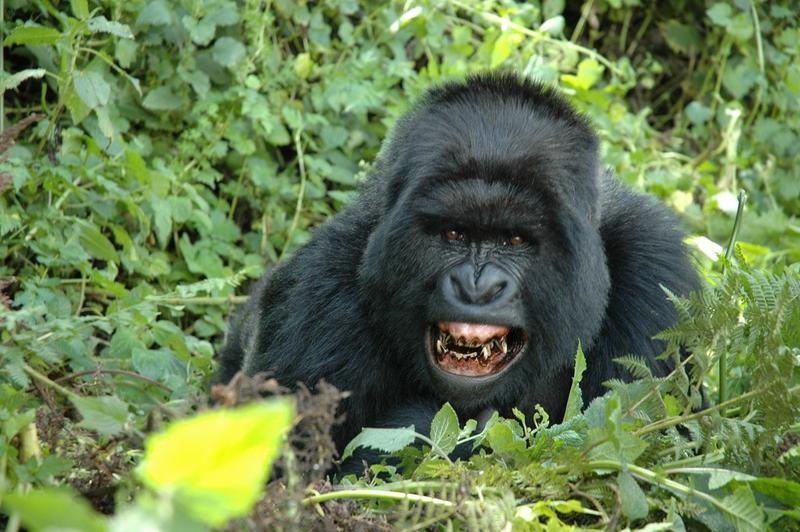 Before his behavior change, Bobo always walked around the enclosure proudly. But more recently, he’d started hiding in the long grass whenever the gates to the sanctuary closed.

Elissa watched him intently and she started to realize that Bobo wasn’t hiding in the grass but rather hiding something that he didn’t want anyone else to see. She had to find out what it was.

Trying To Figure It Out All of the staff at the sanctuary knew that the apes that had come to seek shelter were traumatized in some way, shape, or form.

So it was important that they figured out what was going on with Bobo and do it as quickly as they could. Elissa didn’t like what Bobo was doing. 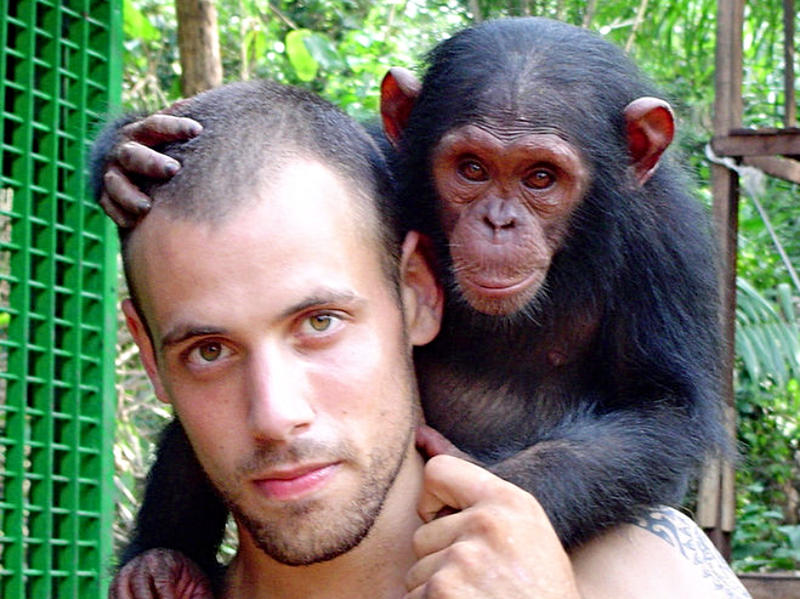 With the rise in popularity of illegal bushmeat and animal trade, Mefou Primate Sanctuary was opened up and funded by Ape Action Africa. They were looking out for the primates of Cameroon.

The staff was devoted and passionate. They swore that they’d do everything they could to help and save these primates. They were all very serious about that promise.

Keeping An Eye On Bobo 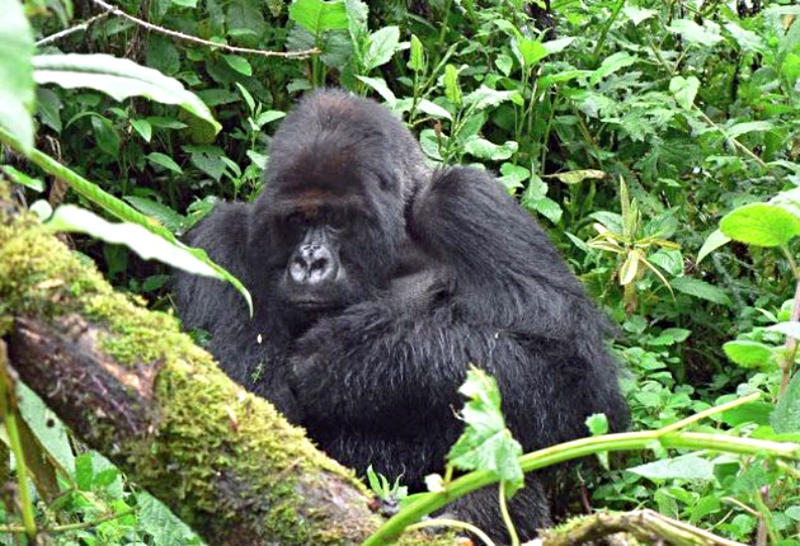 The sanctuary staff was trained and equipped to treating apes with post-traumatic stress that most of the apes suffered from. They would do their best to ensure the comfort of the apes at the sanctuary.

So Elissa kept a close eye on Bobo as he started acting out and tried to hide something from them. All of the staff were concerned at this point. 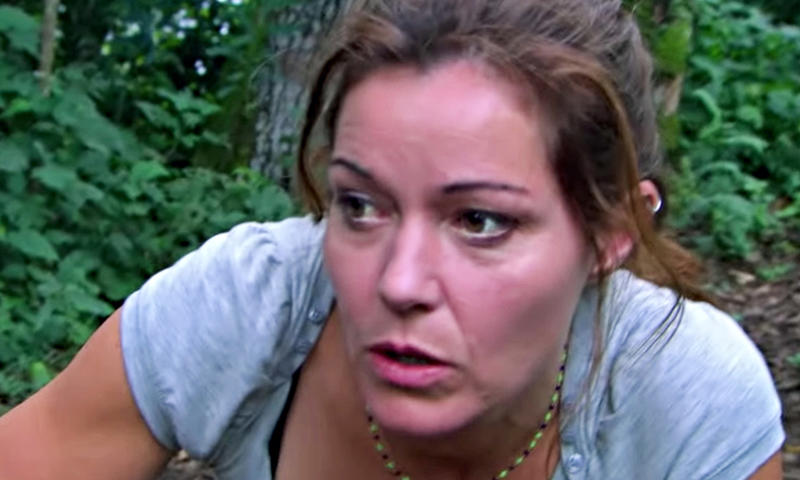 Elissa waited until Bobo had left his grassy patch that he had started going to and went to investigate it herself.

She had found nothing and breathed a sigh of relief. But later on she would realize that Bobo hadn’t hidden something away, he rather kept it on him at all times. 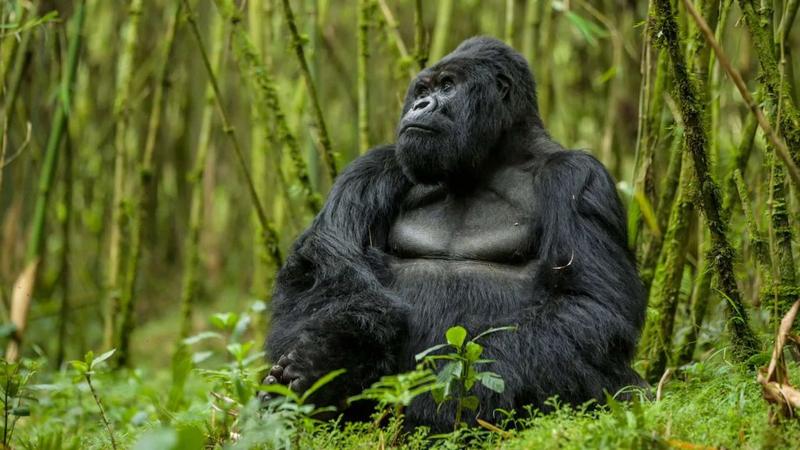 Bobo was usually very friendly with the sanctuary staff, but whenever Elissa tried to get close to him he was quick to create distance between them.

She eventually managed to get close enough to see what he was fussing over in his hands. Bobo wasn’t being protective over some found object – he was tending to another living creature. 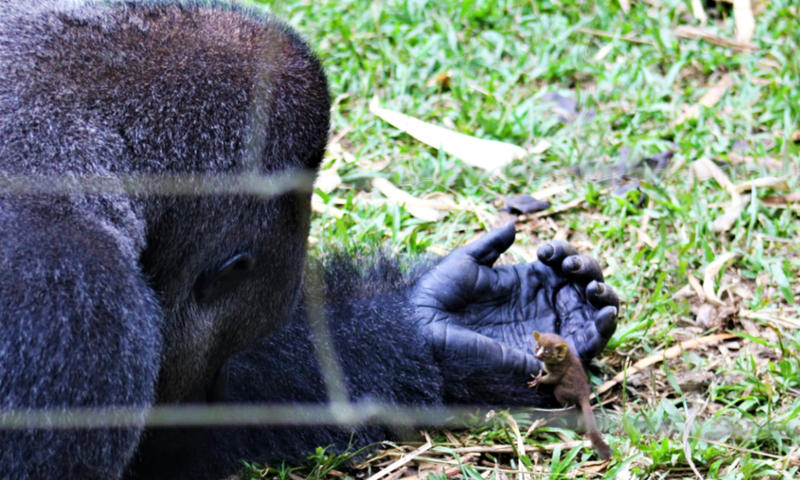 Bobo got spooked once again and headed off into the overgrown grass the moment he realized he was being watched.

The crying creature in the ape’s hand was too small for Elissa to identify from a distance. She would need to come up with a far smarter plan to work out what Bobo was up to. 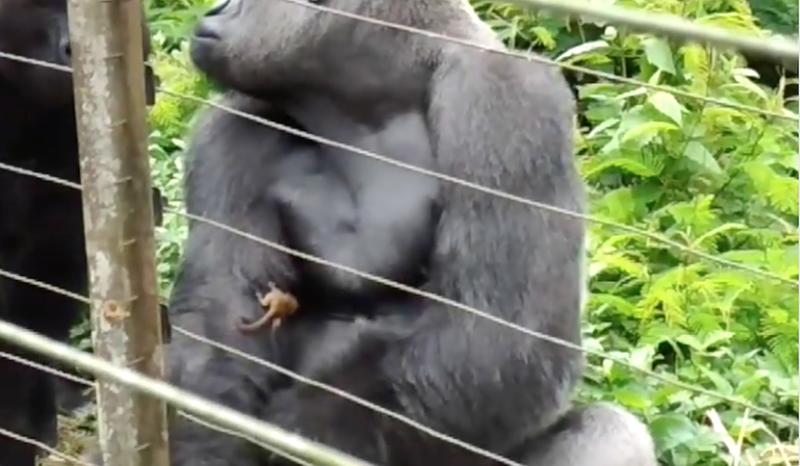 The furry little animal getting poked and prodded by Bobo seemed perfectly content resting in the giant gorilla’s paw.

This struck staff as odd, considering a rodent would be more likely to scurry away. Perhaps it’s injured, she thought. Using a pair of binoculars, Elissa could quickly tell it wasn’t a rodent at all. The tiny creature was actually a primate too. The sanctuary took care of so many apes that you would think it might be expected that they lose track of one or two. But not at Mefou, which took great pride in the individual care they gave each and every animal.

So if the small primate resting in Bobo’s hands wasn’t from the sanctuary, where did it come from? The primate they were studying was a galago. Staff concluded that the creature had found its way into Bobo’s enclosure from the forest surrounding the sanctuary.

The galago – also known as a “bush baby” due to the crying sound they make – wasn’t usually the kind of primate they took care of at Mefou. And they certainly wouldn’t give the responsibility to a giant ape, even if he did treat the little creature like it was his own. 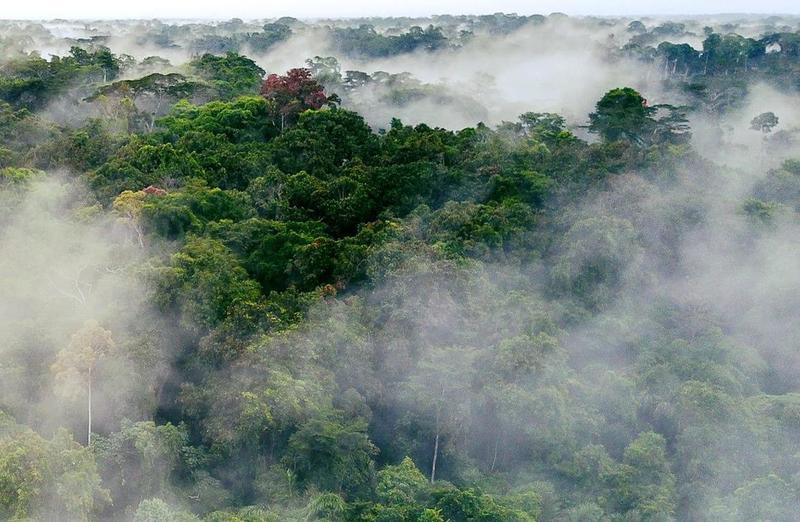 “The bush baby showed no fear of Bobo, moving around his body and spending time hopping around in an open grassy area before choosing to return to Bobo,” said Elissa.

But she wasn’t just taken aback by the special treatment the galago was getting from Bobo. A sighting of a wild bush baby was very rare indeed, especially considering it shouldn’t have been there at all. “Bush babies are usually nocturnal so it is very rare to see one, and even rarer to witness this kind of interaction,” Elissa continued.

Galagos almost exclusively hunt and feed in the dark, so to see one being fed breakfast by a gorilla was one of the most fascinating things Elissa had seen. And that’s not the only rarity about the whole incident. “Wild primates and rescued ones seldom interact with each other like this. They’re either at a sanctuary or they’re in the jungle. We have never witnessed a wild primate interacting with a rescued one,” said Elissa.

But the unique positioning of Mefou’s enclosures by the forest made for a once-in-a-lifetime encounter between a tiny wildling and a giant friendly gorilla – which soon became a huge attraction for the other apes. “The little bush baby was happy to play in Bobo’s arms, hopping off to explore the grass nearby, before returning to Bobo’s hand,” Elissa explained.

It didn’t take long before the other apes in the group realized what Bobo had become so preoccupied with. And a few of the more curious ones moved in for a closer look. “Bobo’s group-mates were desperately curious, but he kept them all at a distance, making sure no one disturbed his new friend,” said Elissa. Understanding what the tiny guest needed, Bobo offered the galago the chance to return to his natural habitat, lifting him up to the tree branch overhanging the enclosure.

Elissa was thrilled that they’d managed to capture the experience on camera and that all was well with the apes. Luckily, the staff at the sanctuary had captured every minute of the unique interaction on camera. They posted it to Facebook, with the caption: “Our silverback gorilla Bobo made a surprising new friend this week — a wild bush baby!”

“Caregivers discovered him cradling the tiny primate during their morning checks, and were amazed to see him handling it with the utmost care.” The video quickly went viral, garnering more than 2,000 comments and over 1.7 million views! People from all over the world and from all walks of life were touched by the heartwarming interaction between Bobo and his tiny friend. “These gorillas have a very nurturing and empathic nature, the human race could learn from these beautiful, thoughtful animals,” one user wrote.

“Exactly why I love gorillas… because they’re amazingly gentle giants who are extremely intelligent animals,” another commented. That’s why it’s very important that this endangered species is protected. Unfortunately, these great apes are under threat all over the Congo basin due to forest conversion to industrial agriculture projects. Another sign of intelligence is the gorilla’s impressive communication abilities, and they’ve been recorded making some 25 different sounds. We share 98.3% of our DNA with gorillas, making them our closest relatives after chimpanzees and bonobos. Sadly, Gorillas are among the world’s most endangered animals.

Charity organizations in Cameroon are hoping to change that. But, as you can imagine, a sanctuary so large needs an even larger flow of cash to continue their work. They rely on volunteers and on donations from the public. During 12 years of operation, CWAF expanded its mission to provide sanctuary for wild orphans of the illegal bushmeat trade, like Bobo. Now with more than 300 primates under its care, Ape Action Africa is now one of the largest conservation projects of its kind in Africa.

One established gorilla group in the Mefou Primate Sanctuary is known as Bobo’s group – which consists of the Silverback, Bobo, two black backs, Kibu and Nkamum, three females; Jasmine, Geri and Avishag, and her juvenile Eto-fils. Bobo’s rise to internet fame has helped raise awareness about these animals’ plight and about the charity groups who work hard every day to preserve Cameroon’s natural heritage for future generations. Their work is vital.

Besides the bushmeat trade, habitat loss is one of the other major threats to the long-term survival of Cameroon’s primates. Cameroon has more than 20 million hectares of tropical rainforest, but it’s disappearing quickly due to unsustainable foresting and poaching practices. But not all is lost… Although gorillas are still on the endangered species list, there is still hope.

Sir David Attenborough, who first visited Cameroon in 1979, said, “It is incredibly heartening to see how the efforts of so many different groups – communities, governments, NGOs – have paid off. The threats to mountain gorillas haven’t disappeared entirely, of course, so now the challenge must be to ensure that these achievements are sustained long into the future.”