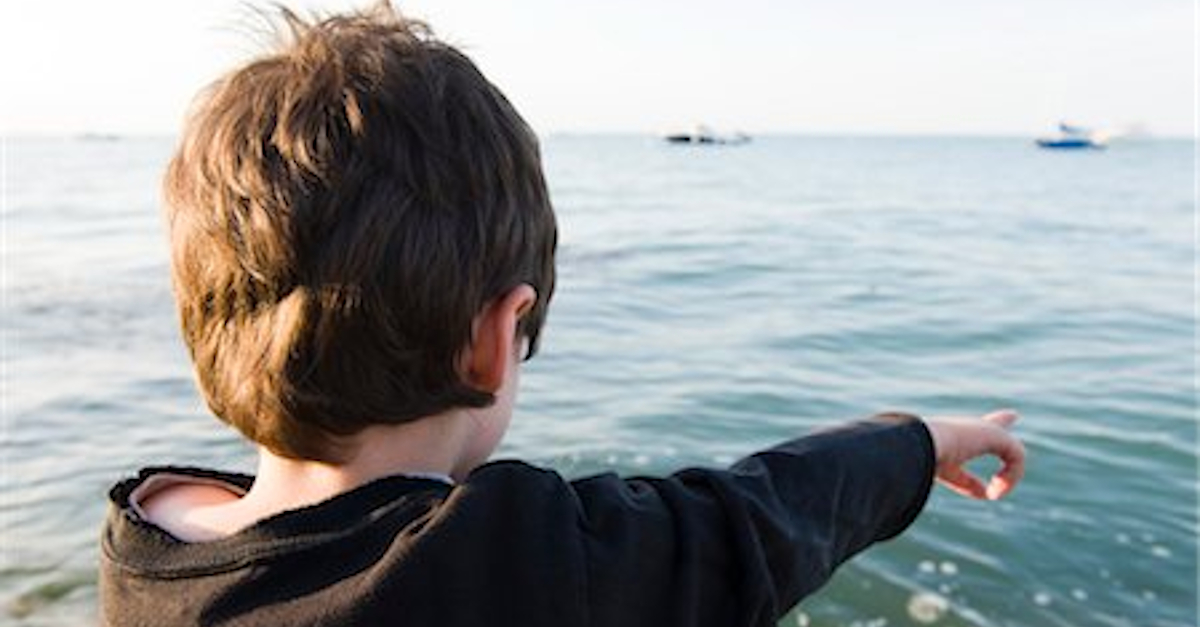 The water rippled again — like there was something colossal moving just beneath the waves. Suddenly, something brushed against his feet and he almost fell. Taking a step back up the slippery stairs and back to safety, he tried to get a better look at the creature that had startled him so.

But when he saw the size of it, he couldn’t believe his eyes. 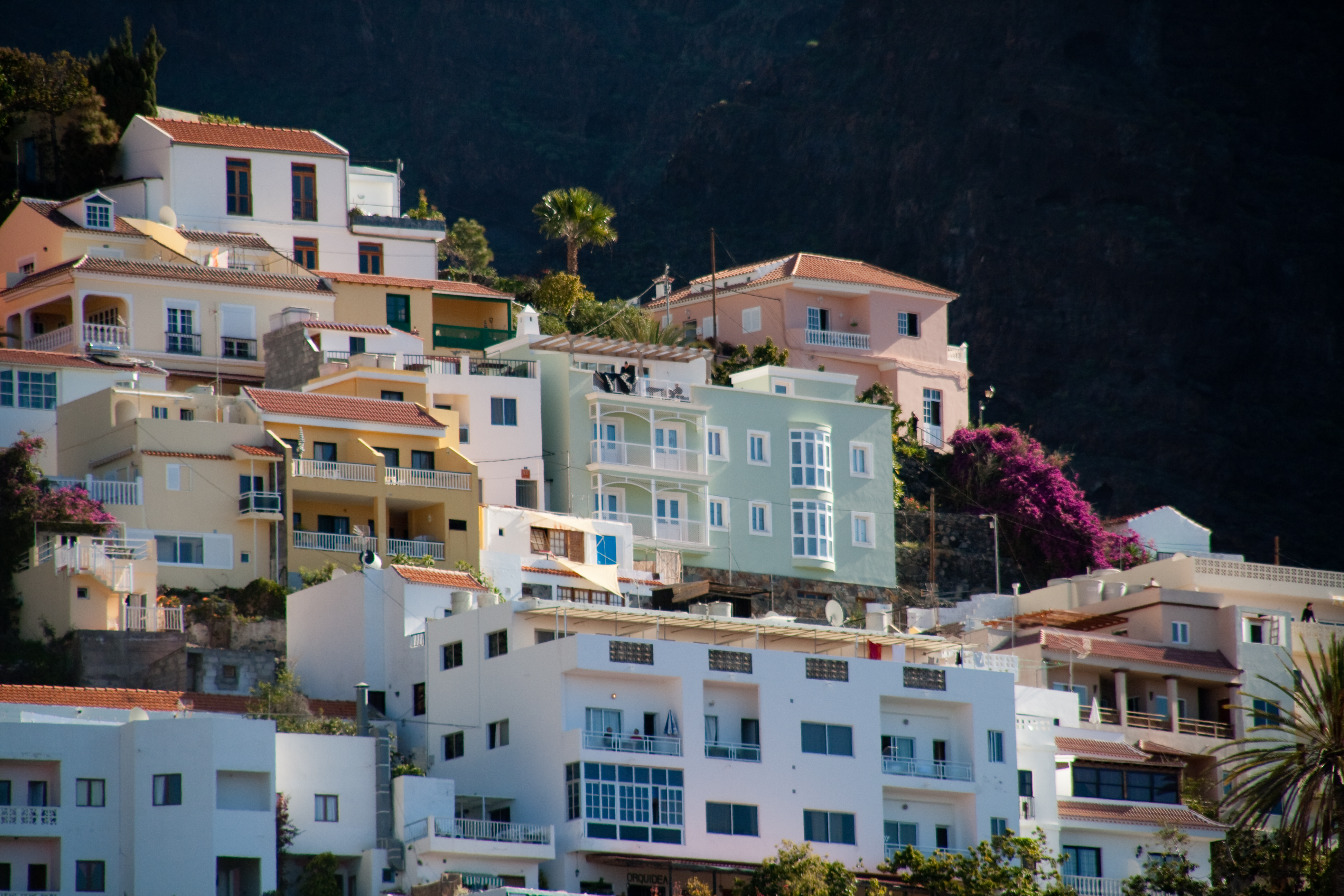 La Gomera, situated in the Spanish Canary Islands, is well-known for its scenic landscapes and pristine beaches. Located just off the African coast, the cool Atlantic Ocean and the wildlife that inhabit it attract visitors from all over the world each year.

But no tourist had ever witnessed anything like this – until now. The enormous creature that frequents this particular beach has since become legendary. 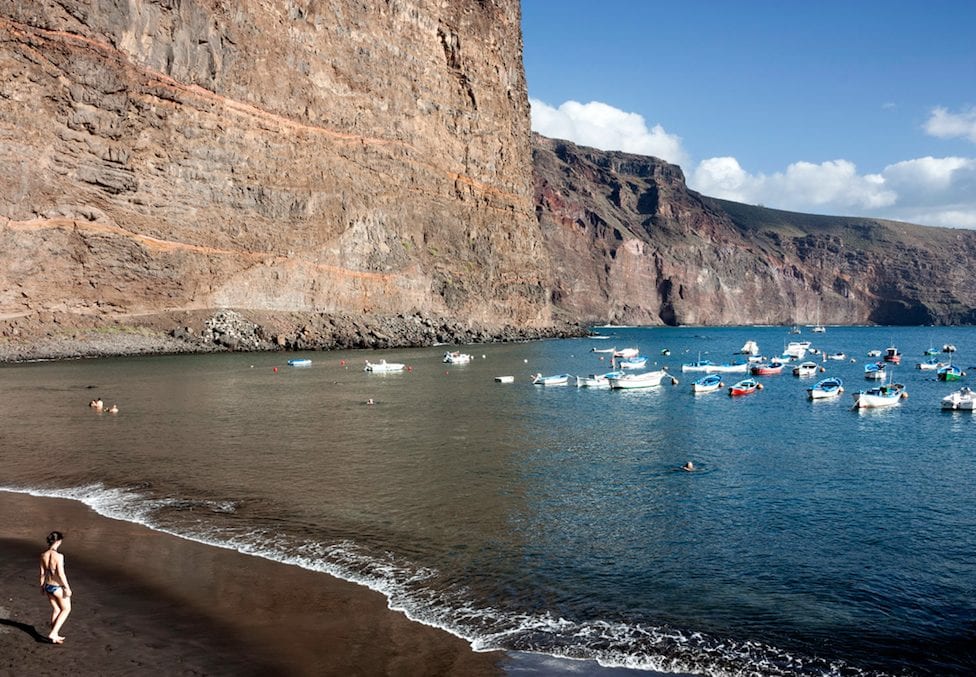 Valle Gran Rey tourist resort draws all kinds of people to its glorious beaches, but another, more unnerving sight was about to greet young Joel. He was visiting the resort with his parents and, like all children on holiday, couldn’t wait to get into the surf.

But he had no idea what was lurking beneath the waves that day. 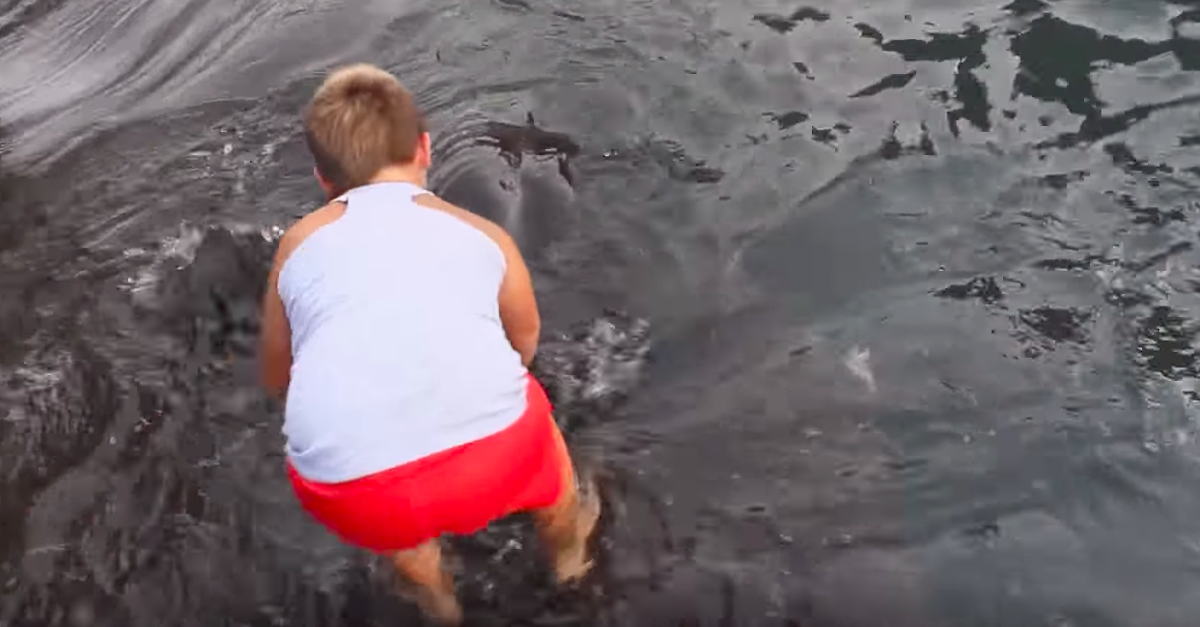 Back in 2013, someone happened to catch Joel’s encounter with the mysterious animal on camera. The footage was posted to YouTube and it exploded. Over 50 million views later, the mesmerizing and strangely haunting video is still doing its rounds on Social Media.

And it’s not difficult to see why. The video opens with a little boy, standing ankle-deep in the water. 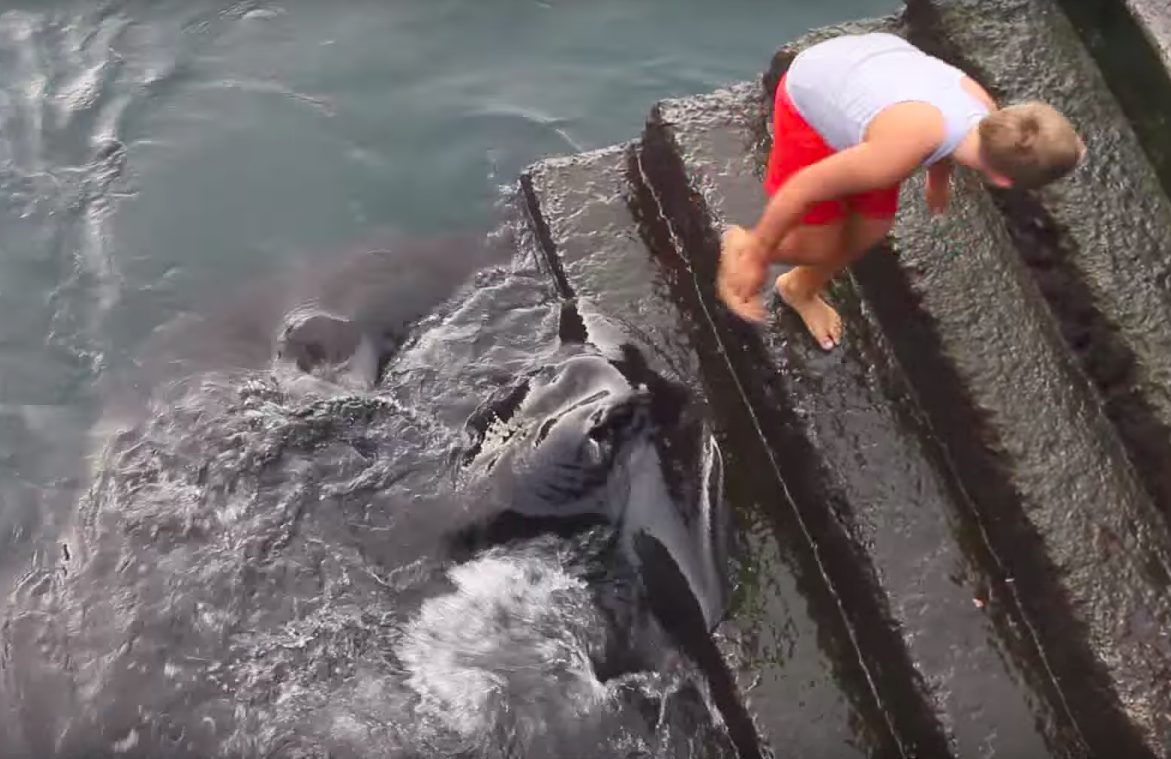 Joel splashed in the water, but he was attracting the attention of something. There was a stir in the ocean as it glides straight for him from the deep. Suddenly, the sea begins to boil as smaller fish scramble out of the beast’s path.

A giant fin breaks the surface and slices through the water, and onlookers can just make out the black, smooth mass beneath it. Had Joel seen it? 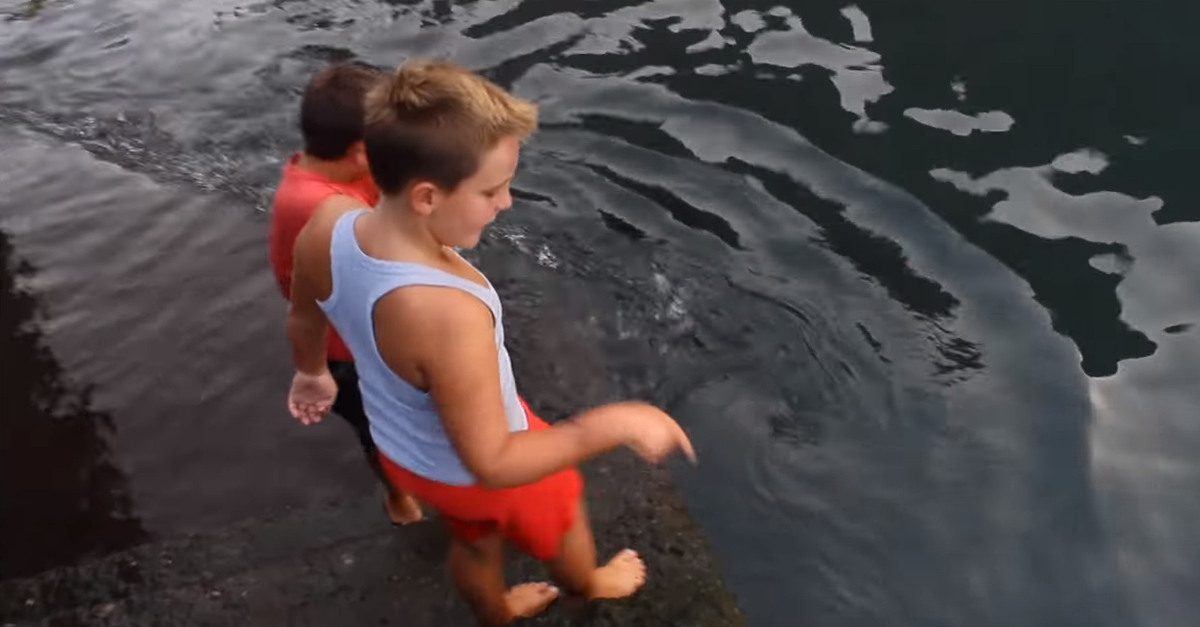 As suddenly as it began, the sea is still again. The people who witnessed it from the safety of the concrete stairs leading into the ocean scratch their heads. Perhaps it was nothing – an illusion created by the ocean current.

But still, they keep filming, not realizing what was about to unfold before their eyes. 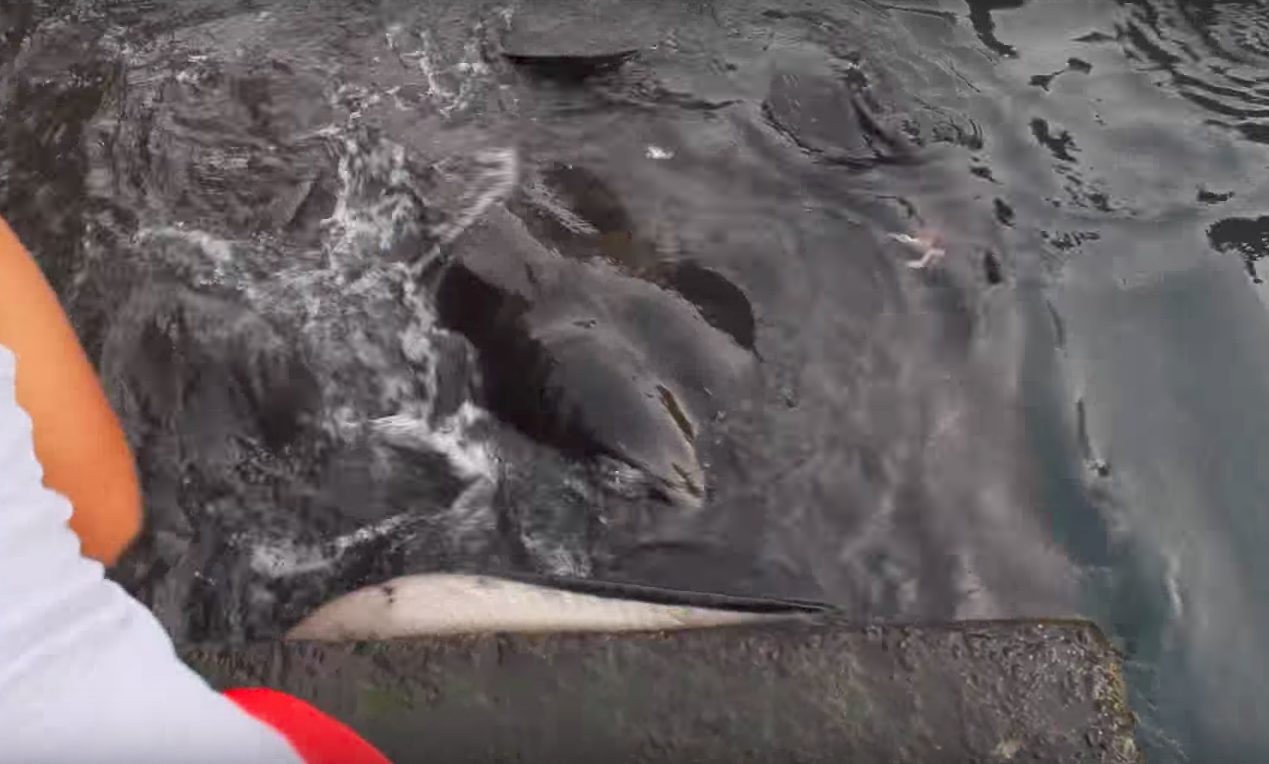 After a few moments of calm, the ocean begins to churn again. Suddenly and without warning, the slick black mass begins to emerge again – this time much closer to Joel. He feels something smooth brush against his feet and jumps back, startled.

That terrifying moment of being touched by something unknown and hidden from view is the stuff nightmares are made of – and it’s all over his face. 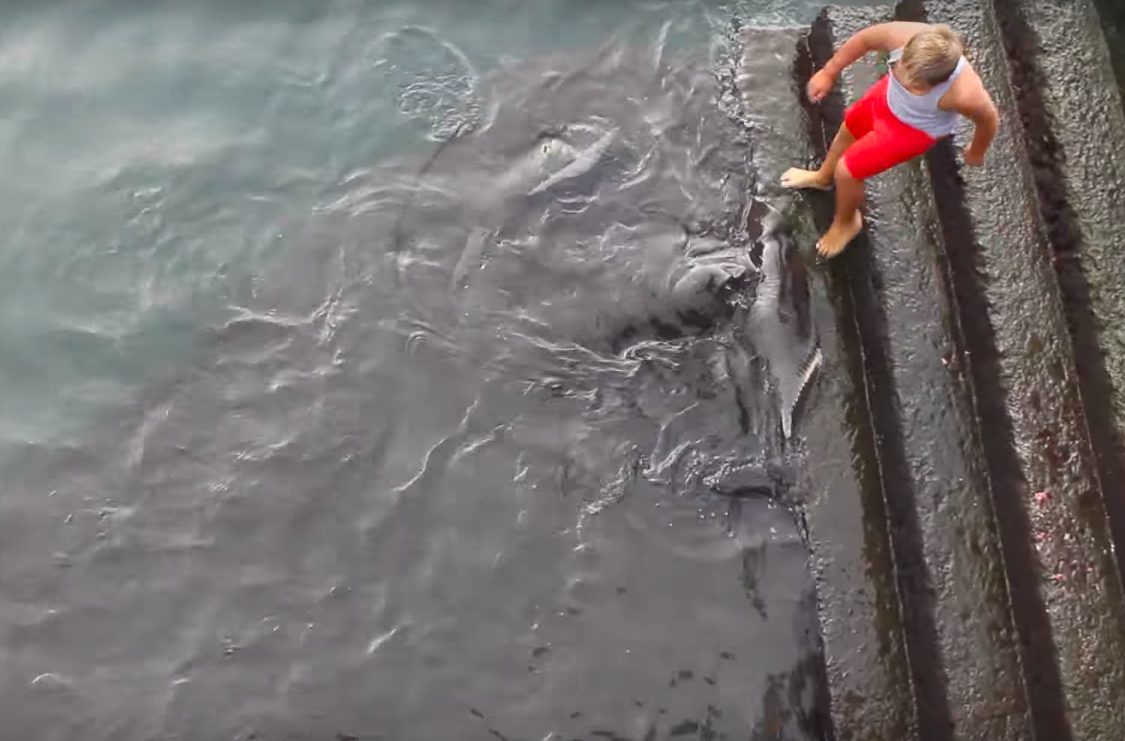 Scrambling up the steps to get away and to get a better view of what was lurking there, Joel turns and is met with a sight that neither he nor the people filming will ever forget.

The enormous creature emerges fully from the sea and drags itself up the lowest step until it’s within touching distance of Joel. At this point in the video, viewers can finally see the black creature’s full size as it lifts itself out of the ocean, and the water rolling off its back as it rises from the waves reveals a colossal, oily body.

Joel had never seen one of these creatures in person, let alone been accosted by one. Until he visited the harbor. 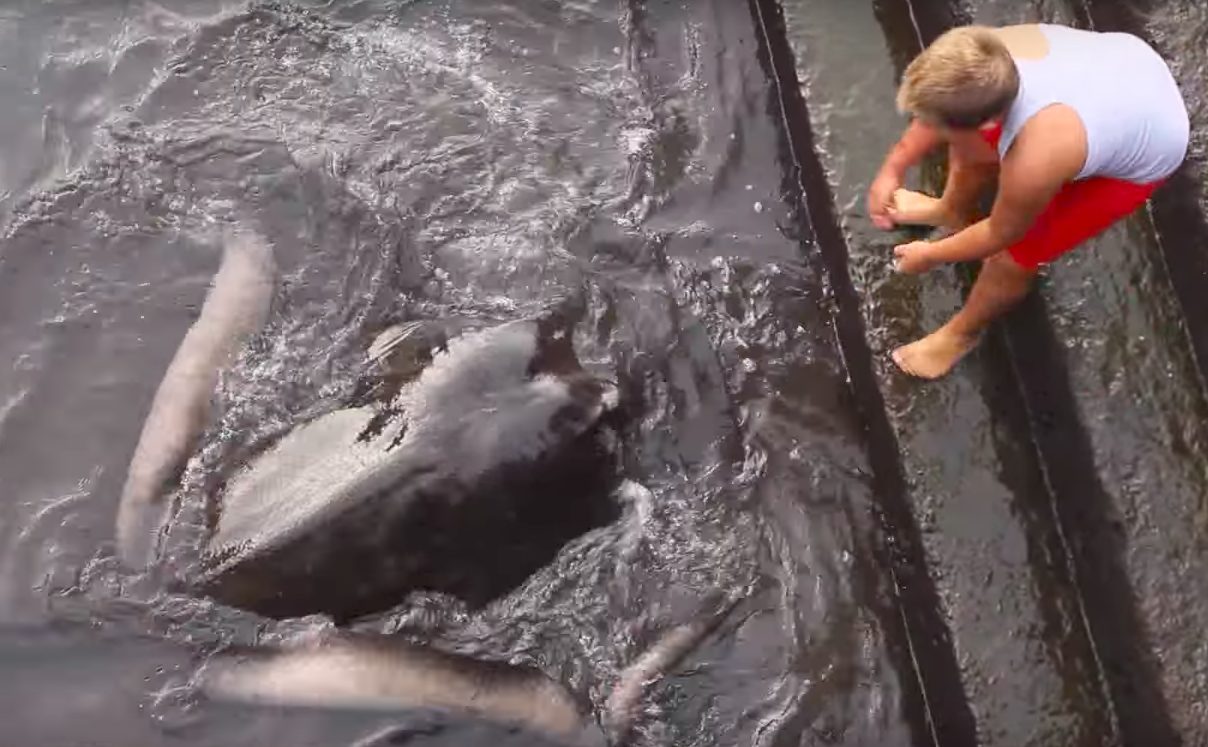 The strange and almost unearthly creature lurches forward, finally revealing itself. There is a startled cry from the onlookers when the realization dawns on them. It is apparent that it is, in fact, a huge manta ray, spanning at least 4 meters wide from fin to fin.

But what does it want with Joel? And is it dangerous?

Sliding His Hand Inside 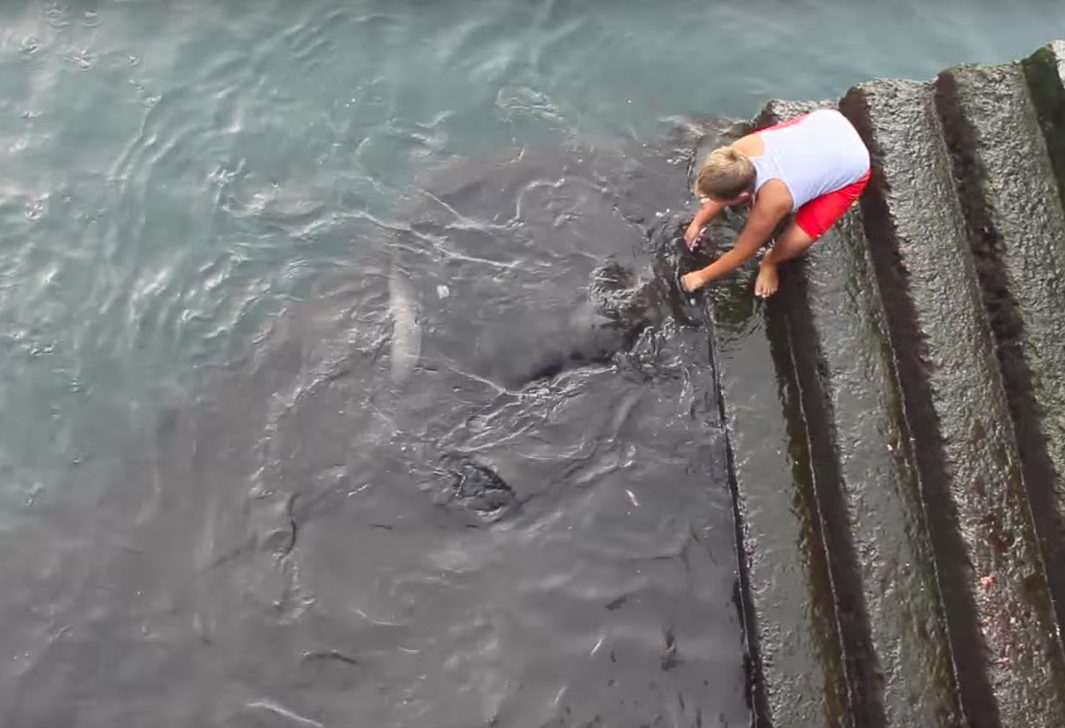 Joel, to his credit, fearlessly places his hand inside and opens his fist. The onlookers can barely believe their eyes. This particular manta ray has devised an ingenious way to get an easy meal. And it appears to be completely unafraid of humans. It brazenly comes up to tourists, who quickly get over the shock of having such an elusive creature so close, and happily oblige.

Joel has a fistful of food and begins to hand feed the colossal animal. 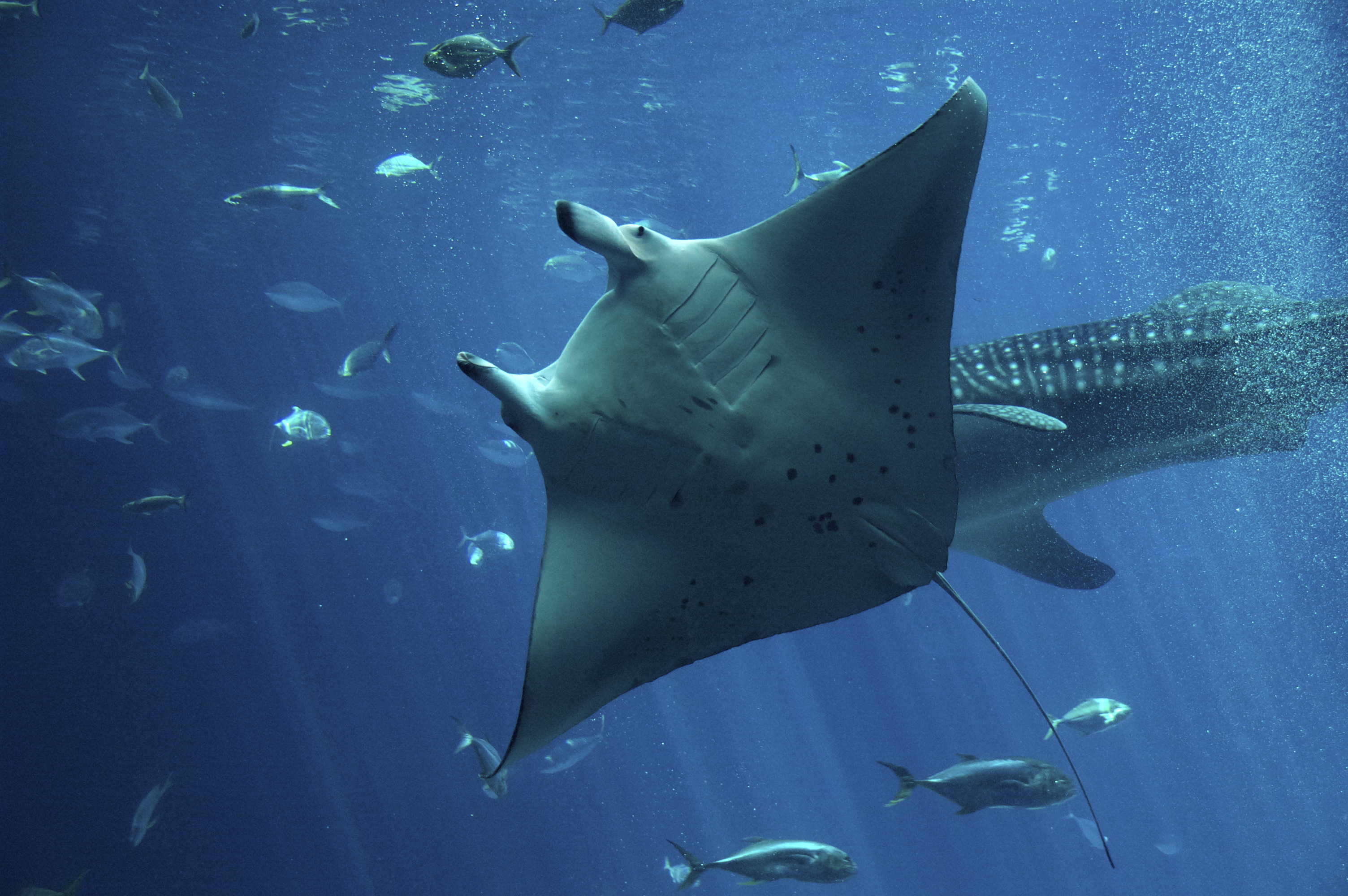 After he has fed it a few times, Joel gives it a stroke along its smooth back. The manta ray responds by waving its fins – as if to say “thank you.” Then, the mysterious fish leaves to prowl around the harbor for a few minutes before returning for another session of petting.

Then, he leaves his little friend and glides back out into the deep. But it wasn’t the last Joel saw of the manta ray. 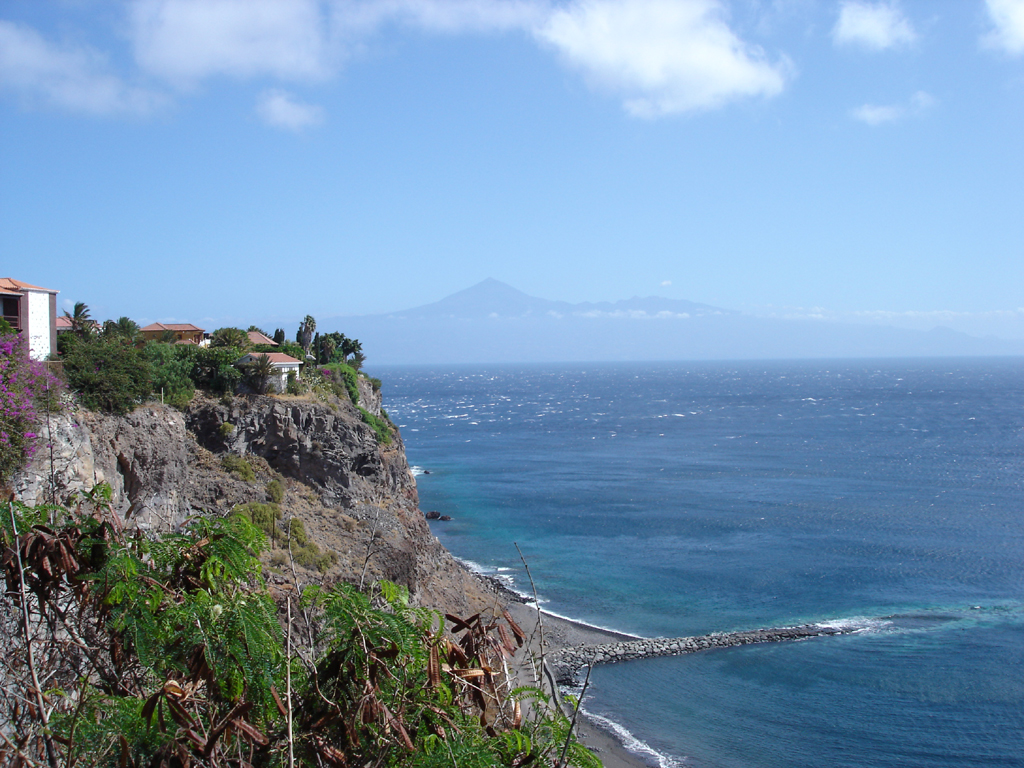 The people of Vueltas, the fishing harbor where the unbelievable scene took place, are no strangers to these majestic creatures. In fact, the manta rays will often follow the fishing boats into the harbor in hopes of finding a few morsels of the discarded bycatch.

But sailors and fishermen weren’t always so tolerant of these creatures. Superstitions about manta rays persisted among sailors, and it’s not hard to see why. Manta rays are strange, almost alien-looking creatures. These enormous beasts are also incredibly strong, and some sailors even believed that to see one while out at sea was bad luck. It was a popular misconception that manta rays could sink a ship by pulling on its anchors.

But it wasn’t until 1978 that another side of these mysterious animals was revealed. 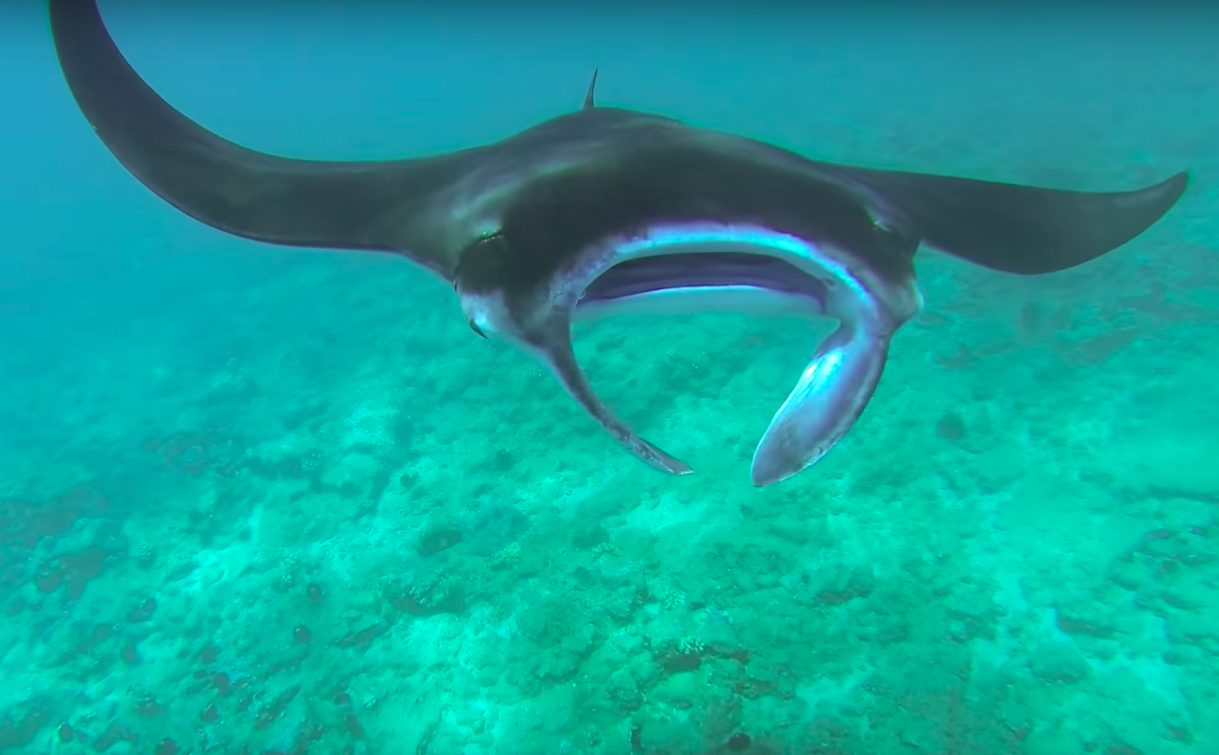 A group of divers in California began to film their interactions with the manta rays in the bay, and many people were surprised to see that these animals were actually quite placid and were no threat to humans.

But it was only with the rise of social media that people began to record and share their own experiences with these fascinating fish. In one such video, a group of divers just off the coast of Costa Rica had an unforgettable experience. As the divers explore the ocean floor, a giant stingray swims straight up to them. That’s when they notice that the ray is caught in a fishing net and needs their help. They carefully untangled the stingray and it’s soon on its way again.

But this particular video highlights another danger that rays face. It’s an unfortunate reality that many rays get entangled in fishing nets. In fact, it happens so often that conservationists consider the species to be vulnerable to extinction. But footage of these beasts and their friendly interactions with humans may actually help with their conservation.

Thanks to these videos, manta tourism is on the rise. Manta tourism not only raises awareness of the majestic manta ray’s plight but also raises money for the local economy. Manta tourism has had such an impact on Indonesia that officials banned manta ray fishing after realizing that manta tourism was far more profitable!

One hunted manta ray could fetch a price of around $500, whereas a live animal as a tourist attraction can earn approximately $1 million in its lifetime. As climate change, overfishing, pollution, and the other effects of industrialization affect the oceans now more than ever, conservation efforts have never been so important. So, while Joel’s encounter makes for riveting viewing, footage like this raises much-needed awareness.

The more people who get to see manta rays for the sensitive and friendly creatures they are, the better!