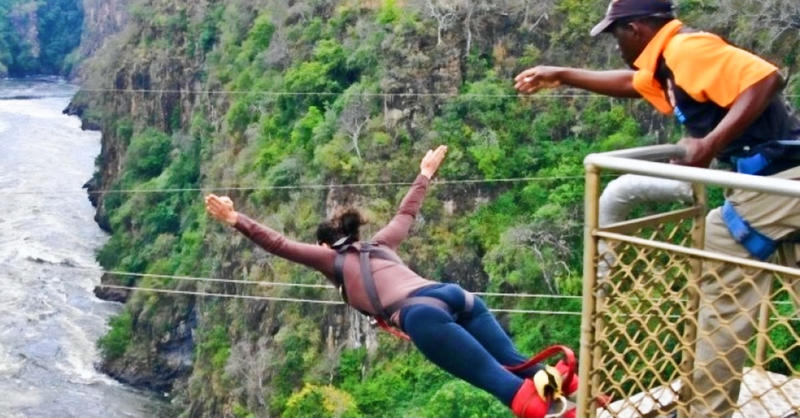 “After a few seconds, I felt a jolt across my chest. It seemed as if I slowed down for a second, then sped up. I could hear the wind rushing past my ears”, she recalls.

She gasped for air as she managed to wrap her hand around a rock that jutted out of the water. Now she needed to hang on, but she didn’t know what was coming next. 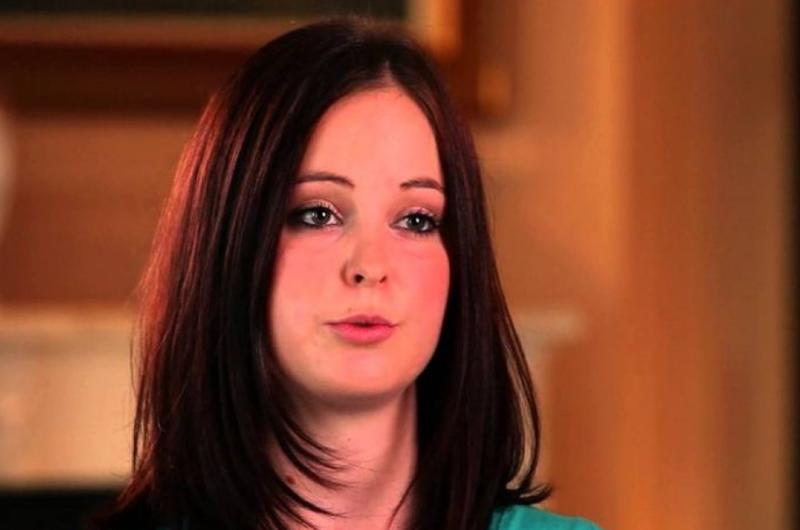 Erin Langworthy was born and raised in Australia and when she graduated from college she decided to go traveling to celebrate the start of her adult life.

She felt that Zambia was a great place to start. She knew it would make an amazing experience that she would never forget. But she had no idea that she’d remember the experience for the wrong reasons. 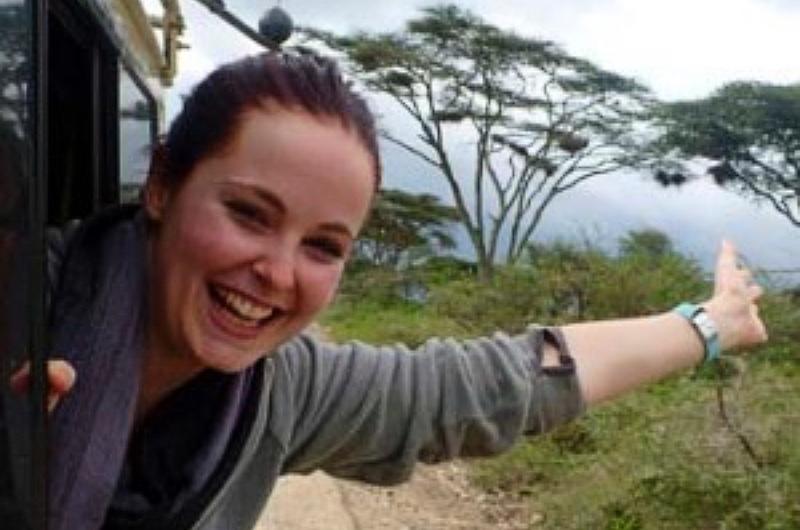 She didn’t want to travel with anyone else. She felt that she needed to be independent for once. So the 22-year-old set out all on her own.

She also wanted to meet new people and maybe make new friends while in Zambia. She also thought that traveling on her own would make for more interesting stories once she was back.

Once In A Lifetime 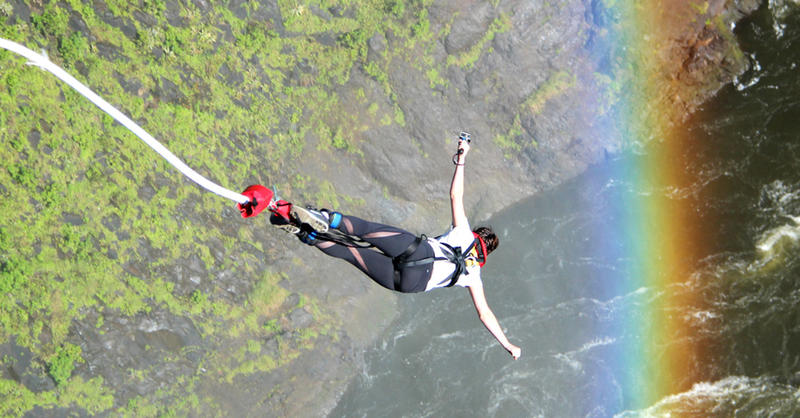 Erin needed something that was thrilling, that would offer her an opportunity most people only dreamed of. She jumped at the chance to do something amazing and would never pass it by.

She signed up for a tour group that would be going bungee jumping. She knew she would love it, even if she was a little nervous. 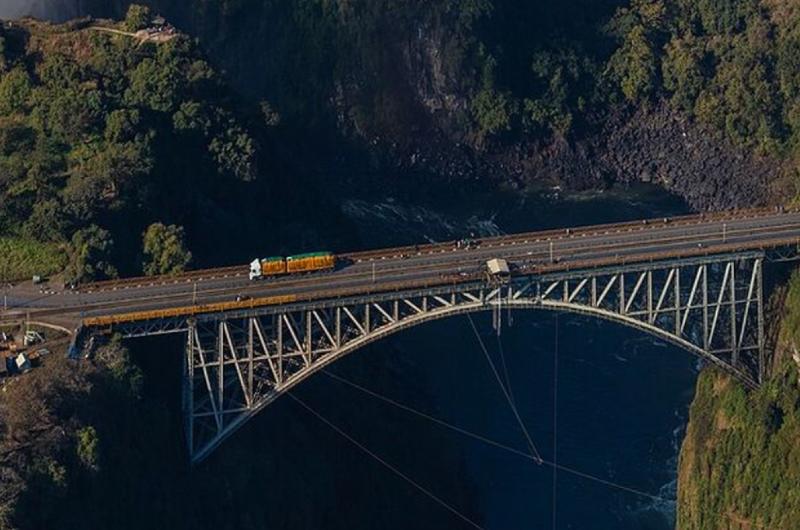 Erin’s mother was less than filled though. She still went despite her warnings and was now at the Victoria Falls in Zambia. The bridge above the Zambezi river was 111 meters high. The gorge was extremely dangerous.

It was an overcast day and the humidity was high. Erin felt that the atmosphere was a little foreboding. More so than she would have liked. “I felt nervous, but never thought anything could go wrong. I was the 105th person to jump that day”, Erin remembers. She knew that it was safe and things didn’t often go wrong. 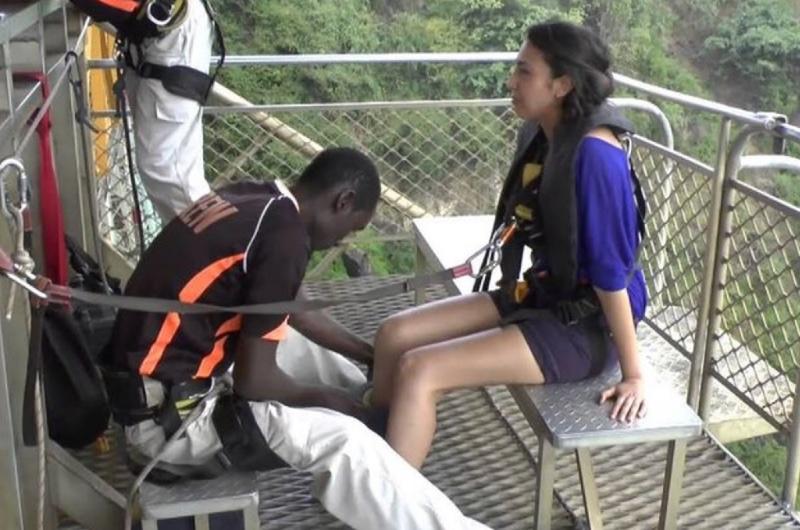 Erin saw plenty of people in her group drop before she did. She let the professionals check her harness and make sure it was on properly. Then they attached the thick rope that was the only thing keeping her safe.

The view from the bridge was amazing. “What am I doing throwing myself off a perfectly good bridge?” she recalls. She should have trusted her gut. 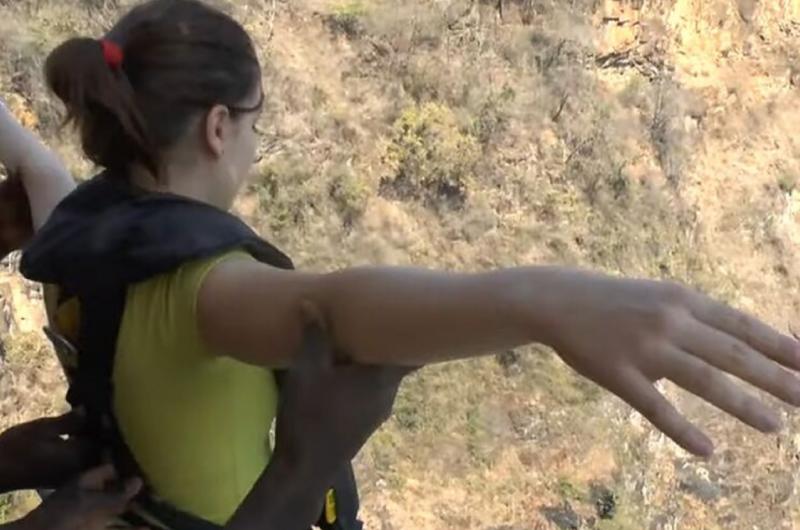 She looked over the edge and tried to control her breathing. She closed her eyes and went for it.

“I was caught up in the moment, and simply spread my arms and fell forwards. Everything sped by in a blue-green blur. The rush was amazing”. But soon, there would be no going back once things took an unfortunate turn. She felt herself fall for 40 meters until she felt the thick rope tug at her body. All she could see was the water below, and even more terrifying, the rocks.

She did just as they instructed, but they didn’t foresee what would happen with her next. And it would be something that would give her the once-in-a-lifetime experience that she was hoping for. 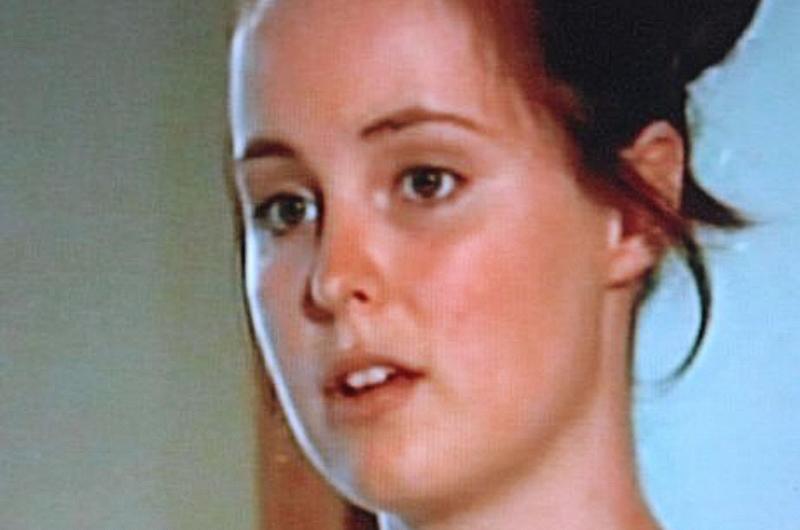 Erin was falling and falling before her descent slowed a bit. But where there was supposed to be a recoil in the rope, Erin’s rope instead created a loud and terrifying snap.

“After a few seconds, I felt a jolt across my chest. It seemed as if I slowed down for a second, then sped up. I could hear the wind rushing past my ears”, Erin said. From then, it went from bad to worse. 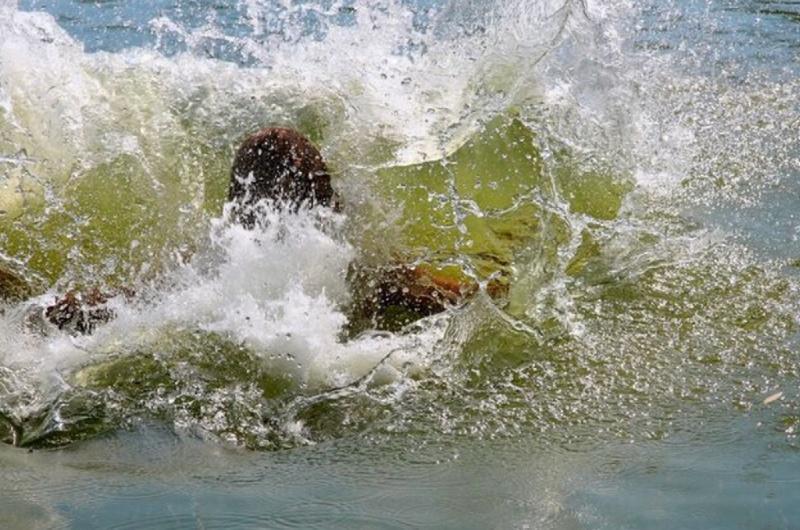 “Instinctively, I brought up my arms, locking my hands together. Then I felt myself hit the water – that’s when I realized something had gone wrong”, she recalled.

Erin hit the water in the safest way she could in her situation. Her quick-thinking prevented her from passing out. Massive splash swallowed her as the onlookers watched in complete shock. But the fight was just beginning. 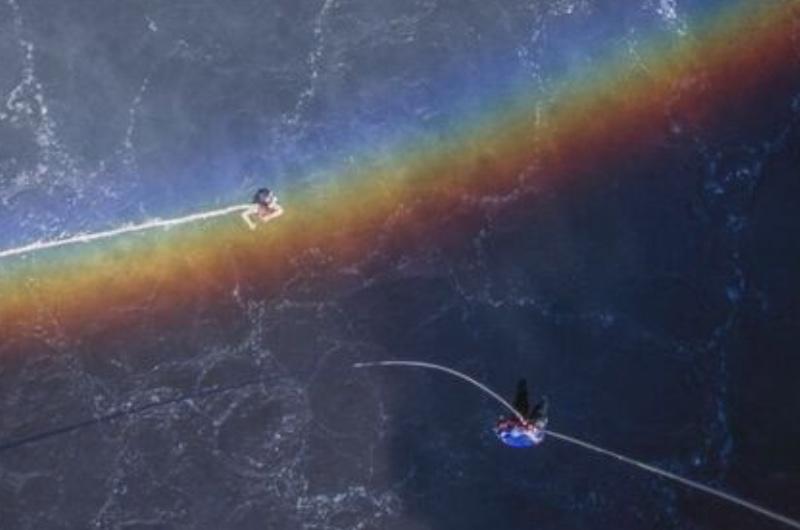 Erin’s bungee cord remained tied around her ankles. It snapped near the top due to the general wear and tear from thousands of people over the years.

“The bungee cord had snapped near the top, so I still had about 30 meters attached to me, which kept getting caught”, she explained. The fast-flowing rapids were more than she could handle. 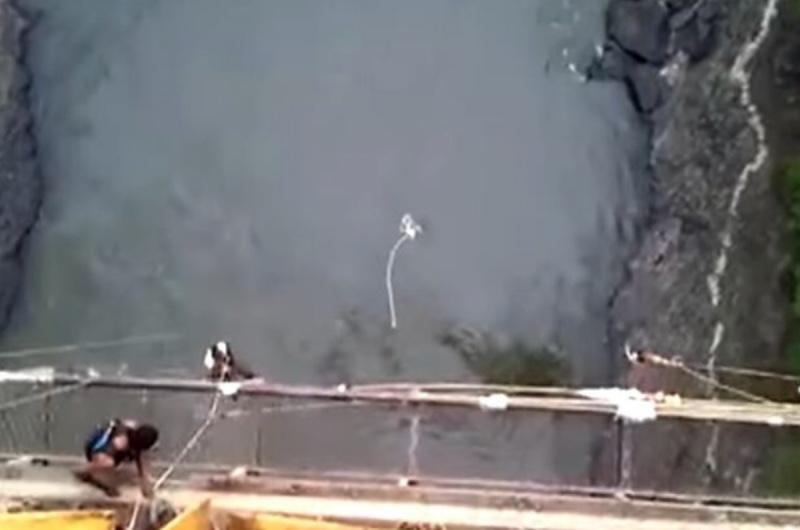 She drifted down the river trying desperately to gain control of her direction. Then the 30 meters of rope that was still attached to her caught a rock on the river bed.

It was threatening to pull her under. Incredibly, she still had enough strength to dive under and free herself. She managed to swim to the bank of the river where she flung her arms around a rock. All she had to do was wait. But something else was waiting with her. When Erin and her tour group arrived on the bus that morning, they drove past numerous crocodiles. Just below the bungee jumping area were crocodile-infested waters.

She knew she was in their territory now and there was nothing she could do about it. “That morning, I had seen crocodiles in the water, but I couldn’t think about that”, she said. After Erin miraculously survived the fall and got herself to the edge of the river, now all she had to do was wait. She vaguely heard the screams and shouts that came from upstream.

She knew they were coming for her, but could she hold on? “All I thought about was clinging on”, she recalled. But time was crawling by. “I now know I was in the water for 40 minutes”. Her rescuer was a man from the bungee company. When he finally got to her, he grabbed her by the bungee harness and got her out of the water before giving her his shirt.

Erin was okay but shivering. She let the man take her uphill to the other rescuers that looked at her anxiously. Erin thought the worst was over but there was one more problem in this ordeal, and it was political. Because the Zambezi River ran along the border of Zambia and Zimbabwe, and Erin was pulled out from the river on the Zimbabwe side of the border, she was prevented from receiving immediate help.

They couldn’t get the local medics to come to her because she had no Zimbabwe passport. The tourists who managed to come to her aid were now in uproar. Erin had no choice but to take the long way to seek medical help. It took 5 hours to get her to the hospital. She was completely exhausted and worried if she had broken anything but luckily, she hadn’t.

She was recovering well at the hospital when she got one surprise visit after another. The bungee workers came to visit her and they assured her that, from now on, they’d be adding extra measurements to ensure the same terrifying experience will never happen again.

“They were very apologetic and astounded I’d survived”, Erin remembers. Her next visitor was someone who booked a ticket to come to her aid the moment the hospital informed her about Erin’s fall. 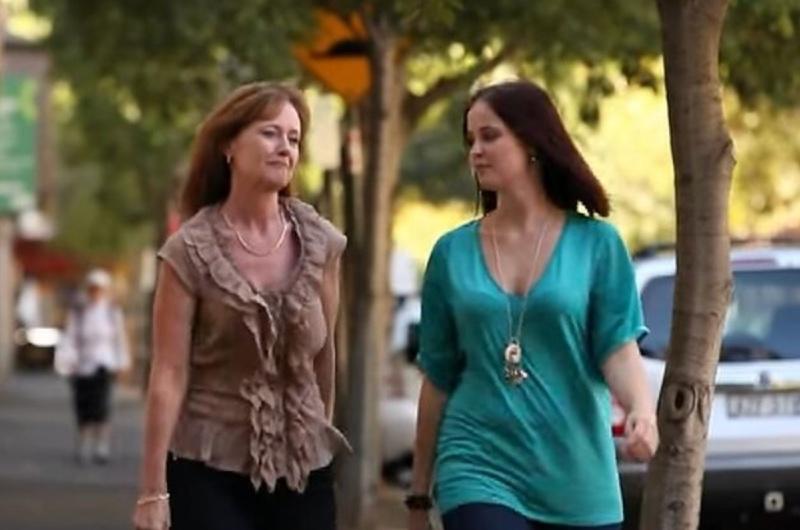 It was her mom. Erin’s mom flew out to ensure Erin recovered well before taking her back to Australia two weeks later where she reunited with her friends and the rest of her family.

Erin lived to tell the tale of this miraculous and lucky escape from disaster. Although she may not go bungee jumping again, she certainly has an experience that will last a lifetime!