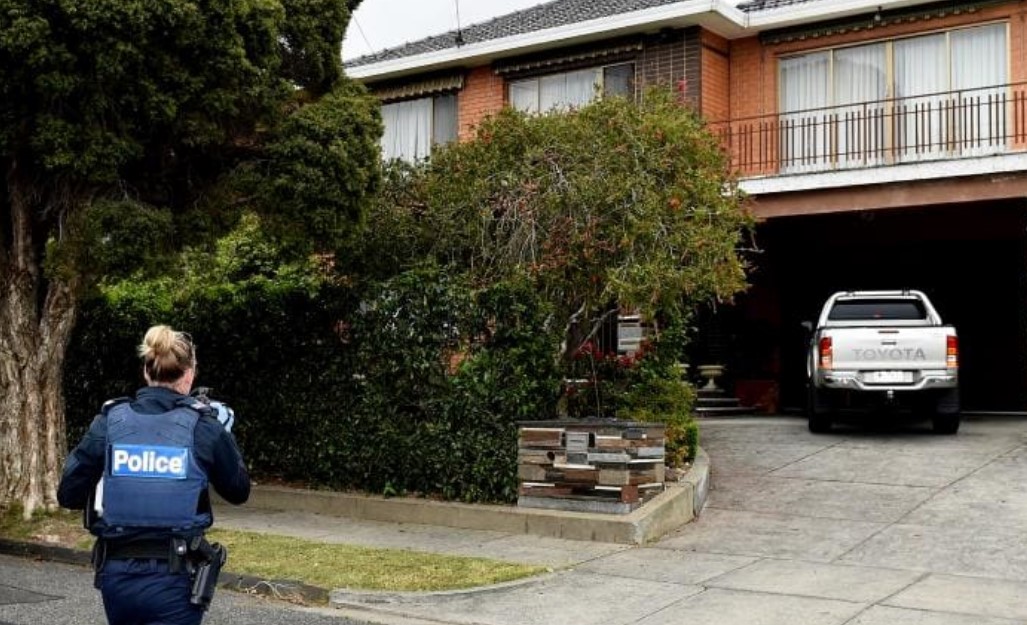 He uploaded the photograph of himself with his new dog and wrote a short caption. Without giving the post a second glance, he hit “share”. Soon, the comments were flooding in. A smile spread itself slowly across his face. But he had no idea that the damage had already been done.
Someone had reported Dan’s dog to the police and they were on their way. Soon, they would be banging on Dan’s door. 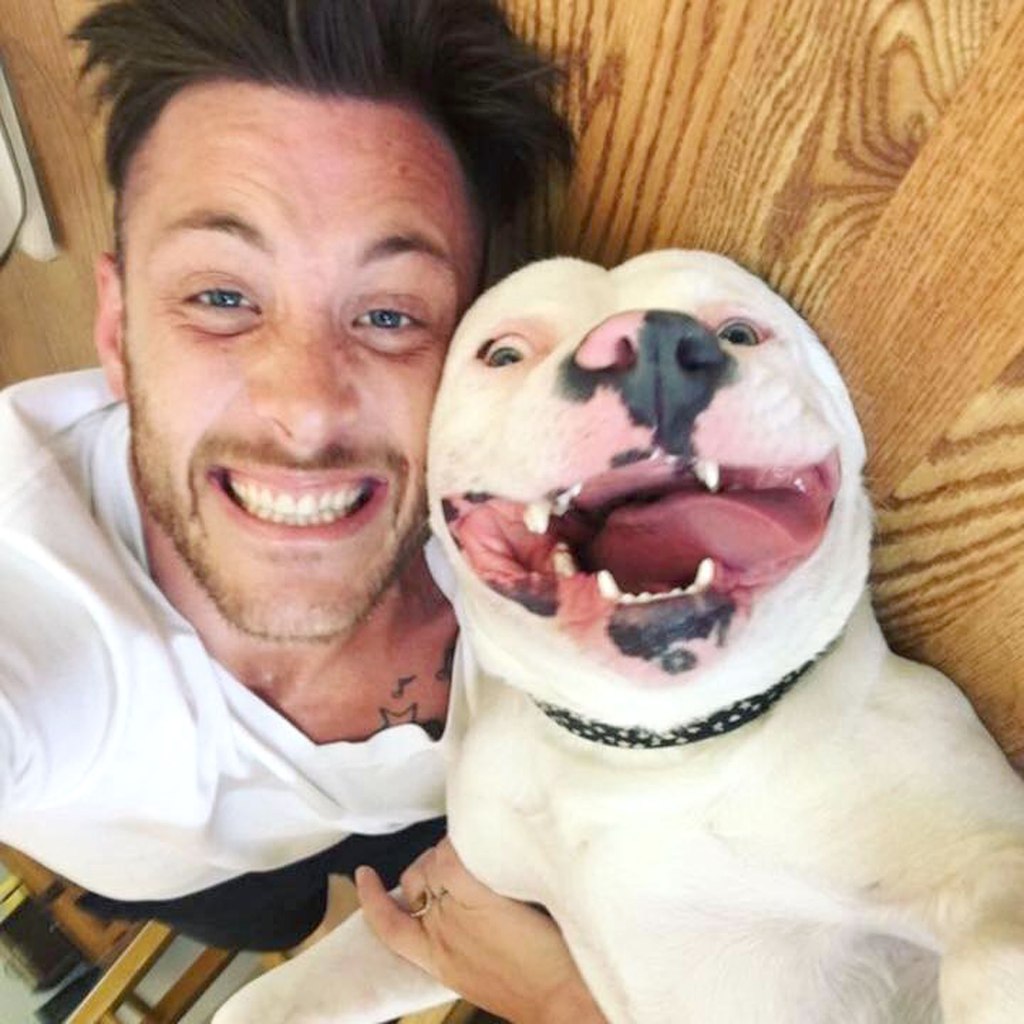 In June 2016, after years of hard work as a musician in Waterford Township, Michigan, Dan Tillery and his girlfriend Megan had just purchased their first home. But no home is complete without man’s best friend.
So after moving in, the couple set out to adopt a dog. Little did they know, however, they were signing up for a world of hurt. 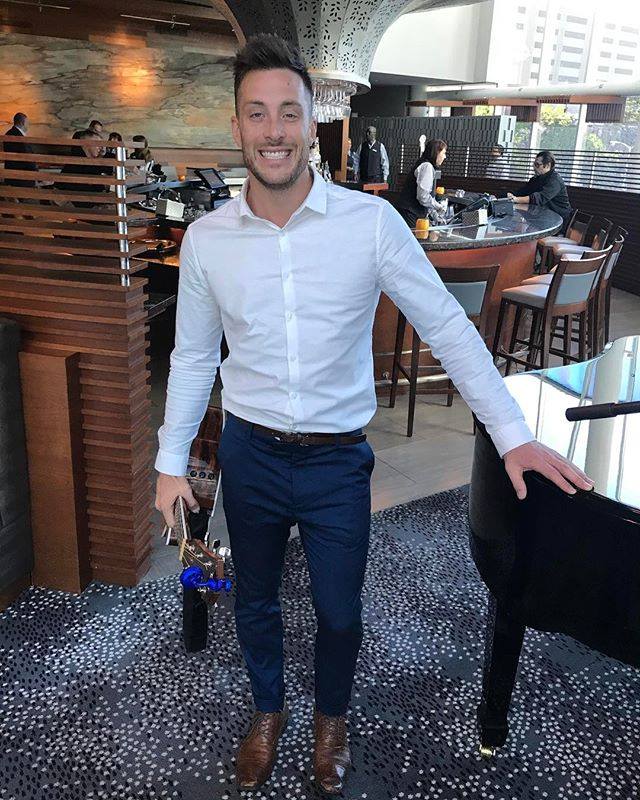 “[My girlfriend and I] have been wanting a dog forever, but the place we were renting would not allow dogs. We just recently purchased our first home. All ours. And dogs are allowed,” Dan happily reported to the Oakland Press later that month.
As it turned out though, not all dogs were allowed. 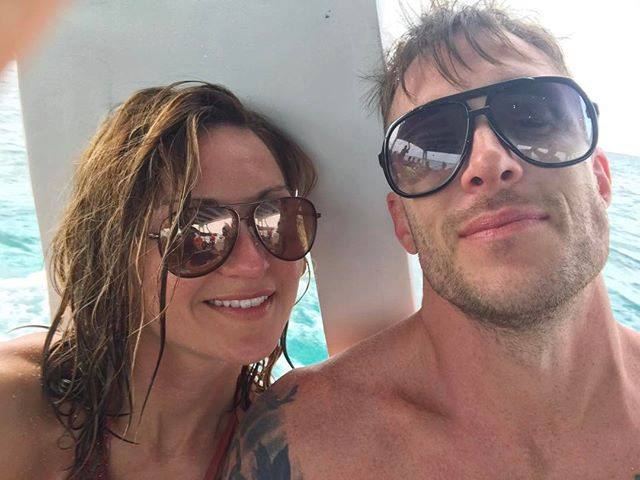 Not long after settling in, Dan first set eyes on an adorable two-year-old American bulldog named Sir Wiggleton at Detroit Dog Rescue.
After he was found lost and hungry on the streets of Detroit, Michigan, Sir Wiggleton was taken in by the shelter and had remained there for about 100 days. 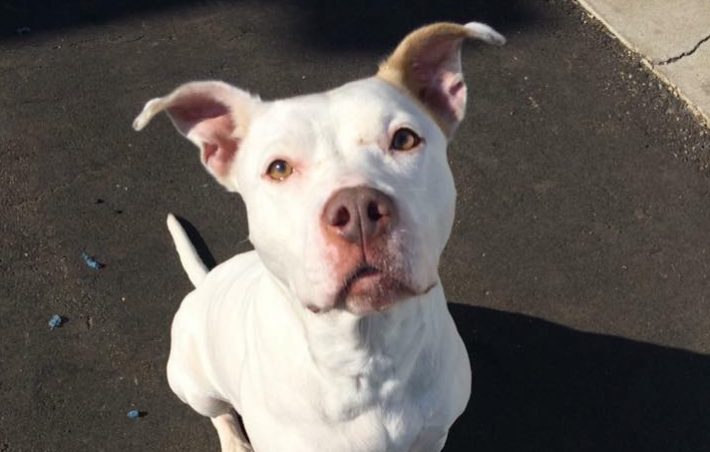 For both Dan and Sir Wiggleton, it was love at first sight. A goofy picture of the pup with his tongue hanging from his mouth and his head cocked won Dan over.
Without a second thought, Dan agreed to adopt him, renaming him Diggy. At the time, everything had seemed above-board and legal. 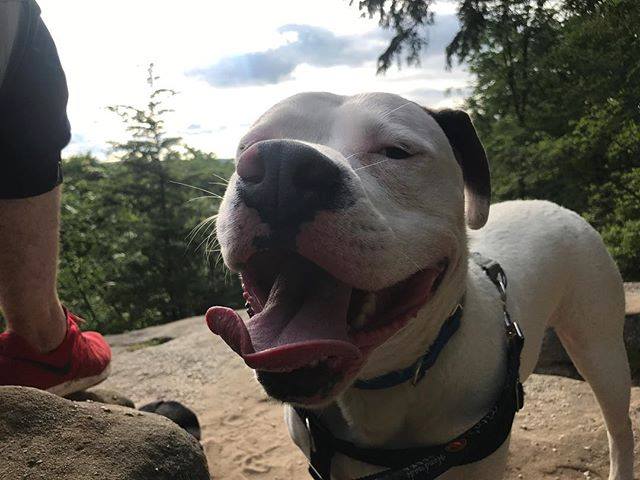 As Dan’s very first pup, the musician was thoroughly excited to bring him home. He couldn’t get enough of Diggy’s wide-mouthed grin, so he understandably began snapping selfies with the happy dog.
But for some reason, just one of these pictures had prompted someone to call the cops on the smiling duo. 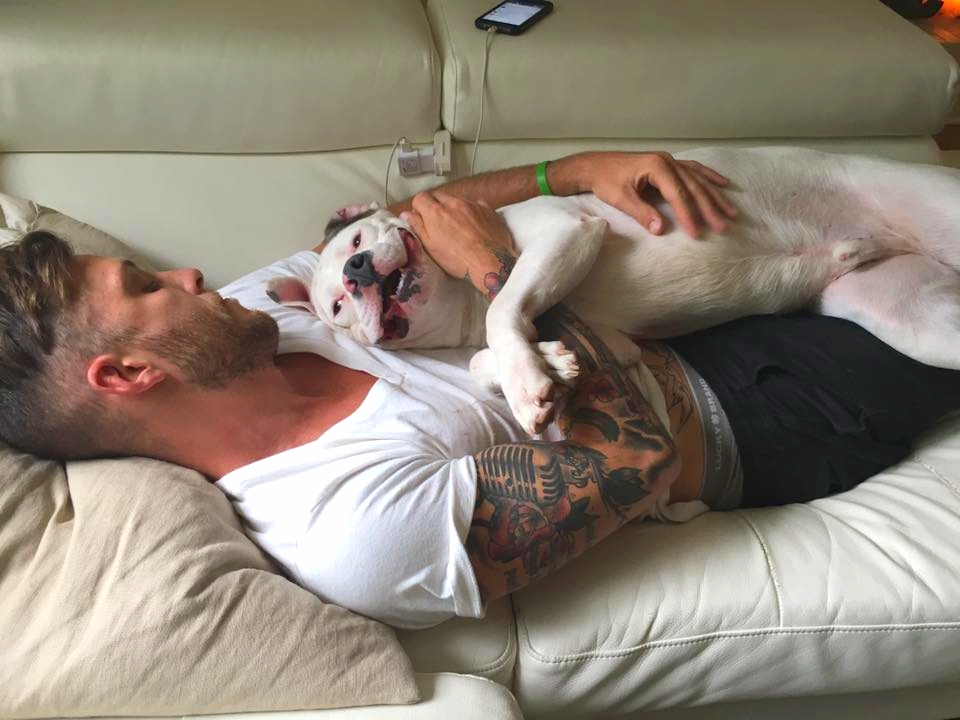 The photo seemed innocent enough: it was a selfie where the pair were showing off their signature silly smiles. Both seemed to be over the moon about their new homes and new family.
As a thank you to the rescue team that brought them together, Dan shared the photo with Detroit Dog Rescue, underlining the happy perks of adopting a dog. 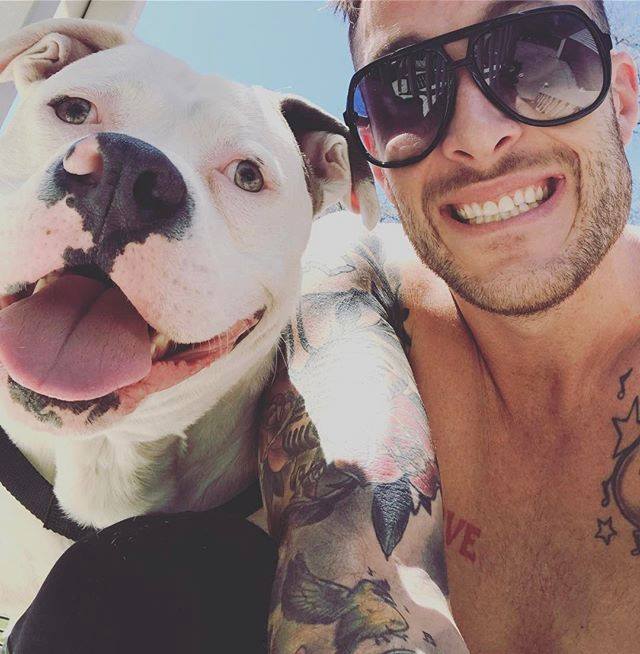 In just a matter of days, Dan and Diggy’s smiles had won over the Internet. In just a day the picture had garnered 24,000 likes on Detroit Dog Rescue’s page. Not long after that, Dan found himself getting messages and calls left and right from the media.
But for every follower, there will always be a hater lurking in the shadows. 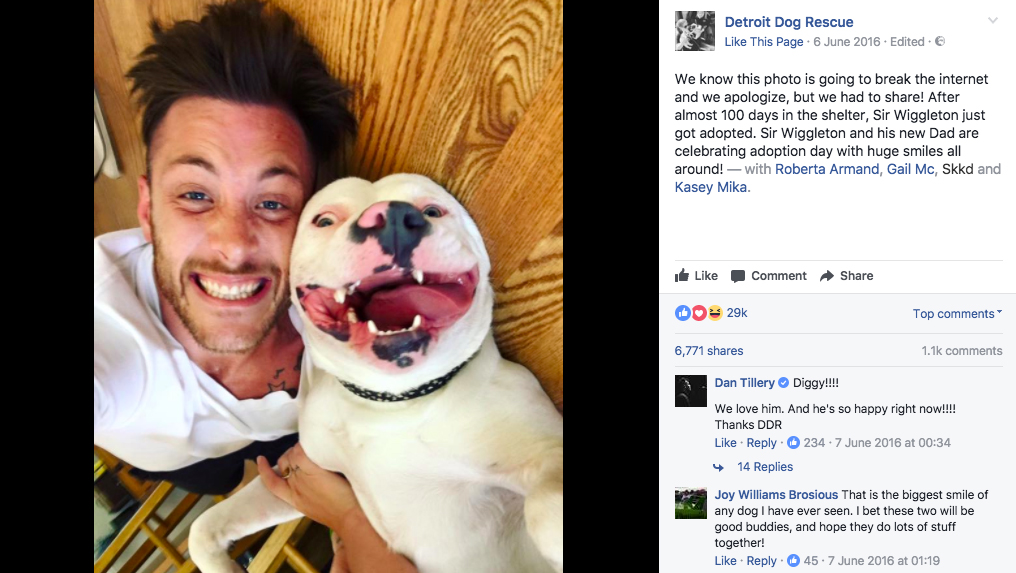 “We know this photo is going to break the internet and we apologize, but we had to share,” the post’s caption read.
“After almost 100 days in the shelter, Sir Wiggleton just got adopted. Sir Wiggleton and his new Dad are celebrating adoption day with huge smiles all around!”


All Eyes On Dan Naturally, Dan was thrilled with the notoriety going viral brings. And as far as he was concerned, there were absolutely no downsides to it.
As a result, it came as a massive shock to Dan when, just a few days after posting the picture, the Waterford Police Department were banging on his door. Having seen the viral photo, the officers informed Dan that he had violated the Waterford’s ban on owning pit bulls. According to the township, both pit bulls and pit bull mixes are considered to be “dangerous dogs.”
Possessing one was a punishable crime. Diggy would have to be returned to the Detroit Dog Rescue, or else. Dan was convinced that the officers would simply let him off with a warning though. After all, Diggy was no more dangerous than a chihuahua. “When they went to the gate [to] actually see him, he licked their face, was very kind,” Dan explained to WWJ. “They said, we’re dog lovers, that’s cool, he seems like a good boy. Took some pictures of him.” Even though Diggy’s adoption papers stated that he was an American bulldog, the officers weren’t budging. Lt. Todd Hasselbach of the Waterford Township Police told The Detroit News in June that Diggy didn’t pass the eye test.
“It looks like a pit to me,’’ he said. “I’d write a ticket.” Dan had just three days to say goodbye. Despite the outcry from animal rights activists, the officers said that they were simply doing their job.
“From our standpoint, it’s a pretty clear case of an ordinance that makes it clear what’s permissible and what’s not. Our job is to enforce the ordinance,” Chief Scott Underwood of the Waterford Police explained to the Oakland Press. Unless Dan wanted to pay a $500 ticket or worse, end up in jail, he had little choice. But the same viral photo that caused all this trouble also served as a rally cry, bringing thousands to his aid.
People, outraged that the police had the authority to take away such a sweet dog, geared up for a counter-attack. So while his fervent supporters organized an online petition to free Diggy, Dan prepared himself for a formal hearing on the matter, kicking off a full-scale legal battle.
Furthermore, both fronts demanded that the township dismantle the pit bull ban, which would allow Diggy to come back home. Dan got to work on what seemed to be a pretty clear defense: Diggy isn’t a pit bull, though he may look like one. “My lawyer and I are going to do everything possible to make sure Diggy stays in his home with us, his family.” he posted online.
“Thanks for all of your support, guys. I’m not a quitter.” Sadly though, Diggy’s status remained uncertain for months. Meanwhile, more than 100,000 people signed the petition asking officials to let Diggy off the hook. What’s more, an army of Diggy’s supporters overpowered a landmark town meeting in September.
Dan and Diggy certainly had the numbers, but would it be enough? “People had really invested their emotions into this story, and it’s beautiful to see so many people care about rescue dogs,” said Kristina Rinaldi, the director of the Detroit Dog Rescue.
Finally, after a heated debate, they got some good news: charges were dismissed in the 51st District Court, assuring that dog and owner could stay together. “We get to keep our boy,” Dan wrote in a celebratory Facebook post. “He’s a good boy.” After a long fight, Dan and Megan could give dog with the famous smile the life he deserved. In a landslide victory, the township changed the rules on the pit bull ban.
Now veterinarians will be the ones to determine the breed, and not police officers “eye-balling” the situation.
Must Read
European Space Agency Budget Increases By 10 Billion For The Next 3 Years
Artemis 1 Finally Launches: What It Means For Space Travel And Exploration
Clam Species Presumed Extinct For 40,000 Years Has Been Found Alive