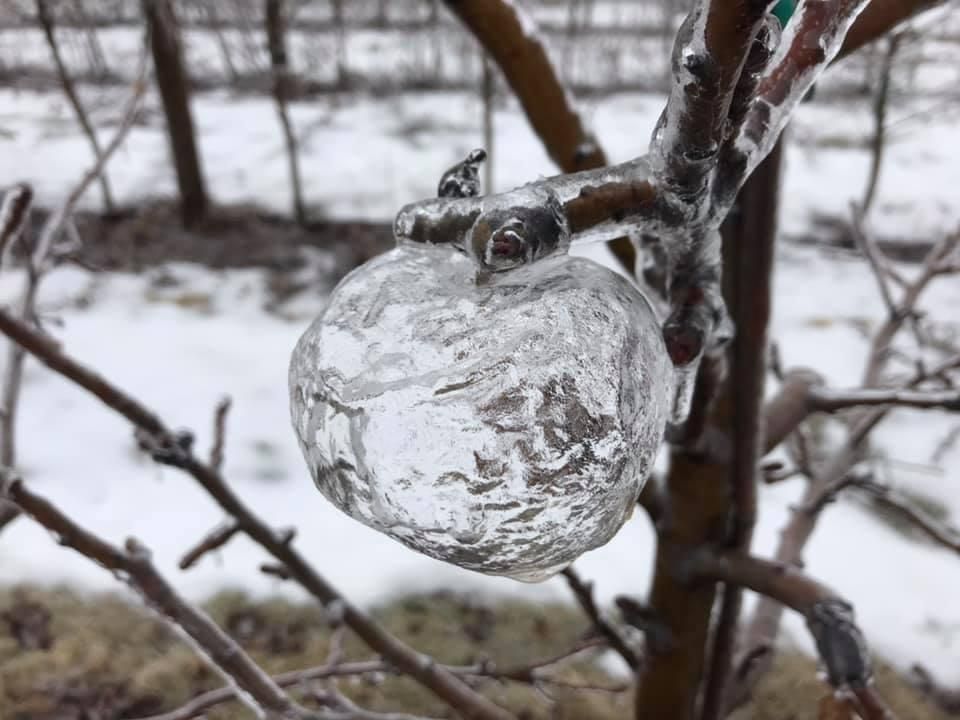 You walk out across the frozen ground. Your boots crunching on the snow as you approach the orchard. The snow-dusted trees seem ominously dark compared to the rest of the landscape. You slowly enter the grove of trees and see the transparent ethereal fruit hanging from the tree branches before you reach out to pluck the clear fruit.

It may sound like something from a children’s cartoon or perhaps something from a roleplaying game but that is exactly what happened to Andrew Sietsema of West Michigan when he recently discovered ghost apples hanging from his trees.

Spirit Of The Fruit

While pruning his trees, Andrew Sietsema came across this spectacular yet unexplained phenomenon. Most of the apples fell to the ground but some of these clear apples remained. No one could truly explain what happened though Andrew has a theory.

Andrew, who studied horticulture, thinks that it could possibly have happened after some icy rainfall the apples were encased in the ice. The apples, a type known as Jonasgold, are very resistant to cold temperatures, even sub-zero temperatures. This would mean that the apple remained fine while the casing was frozen solid. During slightly warmer temperatures some of the casing may have melted and soaked into the apple, letting it turn to mush. During the pruning, the trees shook, letting the mush pour out of the bottom of the apple.

Andrew admits that he has never seen anything like that, and assumes that while it’s possible that it has, other pruners may simply have been too busy to notice the hanging apple moulds. These empty, icy Jonasgold moulds led to Andrew nicknaming them Jonasghosts.

A possible explanation may have been given by a retired University of Illinois, fruit and vegetable horticulturist, William Shoemaker. Shoemaker pointed out that during the period when these photos were taken, there had been a recent polar vortex. The apples had also been left over from the harvest. “Besides being somewhat mummified, they could also be rotten,” Shoemaker explains. “It happens a lot with apples left on the tree. They maintain their form, but their substance gets closer to applesauce.”

If an apple’s temperature drops to -18°C (around 0°F) or below, then the entire structure inside the apple could collapse, turning to a very fluid mush making Andrew’s theory plausible. As to why the apple wouldn’t freeze solid during such temperatures, Shoemaker points out that the high acid content of an apple would prevent it from freezing except at incredibly low temperatures.

What Are The Odds?

“It’s certainly unique, but I would guess it has happened before,” he said when he was asked if it might have happened before, and added: “but it probably never had exposure to a journalist before.”

Whatever the cause may be, the one thing that is certain is that as eerie as they seem, these