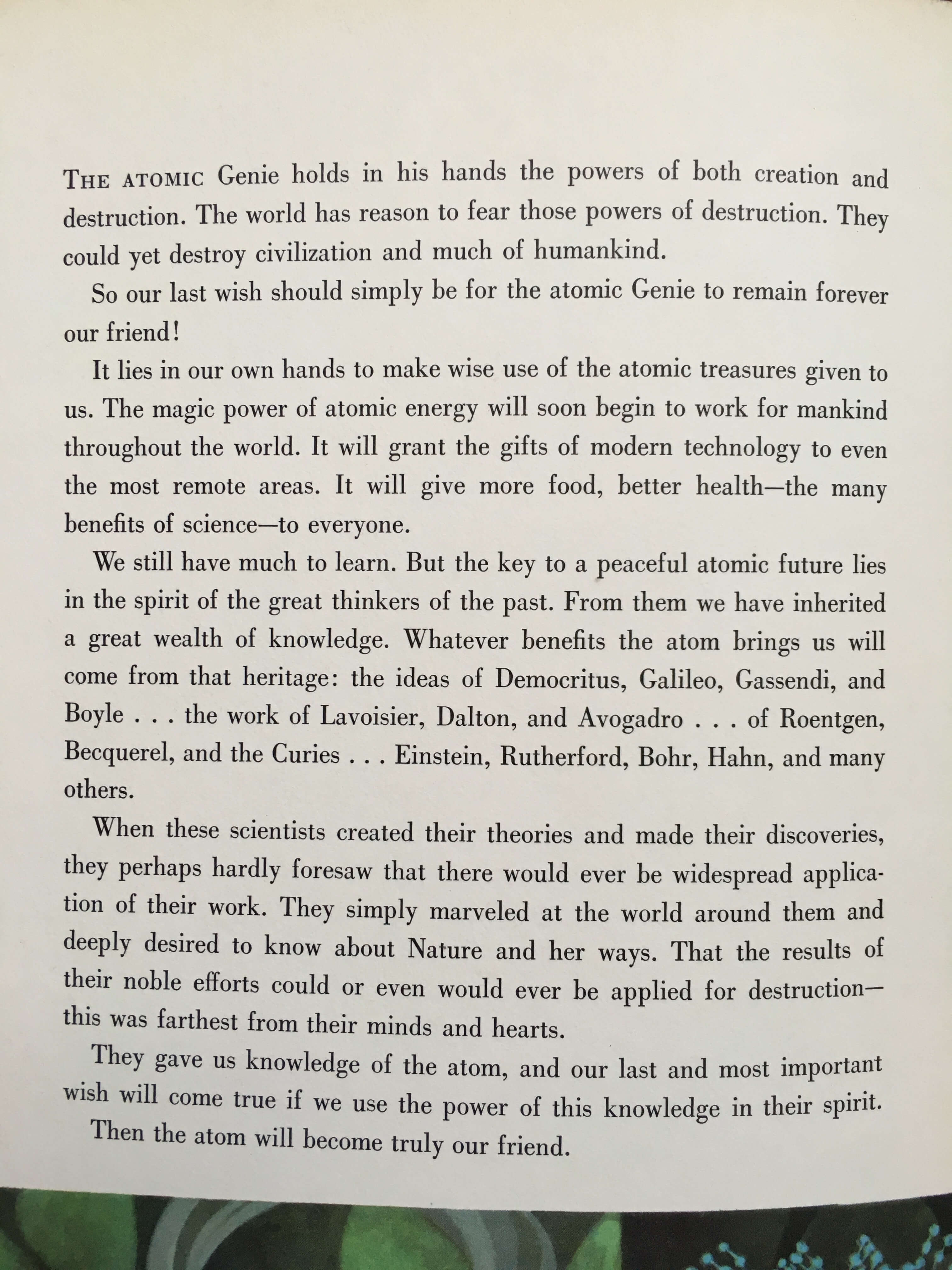 Roughly ten years after the atomic bombs were dropped on Hiroshima and Nagasaki and during the early part of the Cold War, the fear of nuclear war permeated the nation.  At the same time, the promise of nuclear energy was beginning to take shape with the first nuclear power plant coming online in 1954.  Being no stranger to propaganda, in 1956, Walt Disney produced The Walt Disney Story of “Our Friend the Atom“, in collaboration with Heinz Haber (a German physicist and professor at USC ) and illustrated by the Walt Disney Studio.  The book’s intent, clearly, was to change the public’s perception of the atomic era and to embrace nuclear energy and atomic science.

I had the good fortune of discovering a copy at a used bookstore a few years back (hence the ripped cover in the images below).  The book was considered to be the literary counterpart of the Walt Disney motion picture “Our Friend the Atom” which was first released on the Disneyland TV Program.

The story tells how the atomic age began and how knowledge of the atom’s energy finally emerged after much effort.  The characters of the story are the great minds of the past who contributed to modern atomic science.   The atom is explained and (hopefully) understood by the reader through [a]:

“simple and fascinating presentation and appealing illustrations… from the first speculations of Democritus to the beginnings of atomic power today.  It gives close-up views of:  Roentgen seeing his hand in the first X-ray picture…  Rutherford bombarding the atom to find its nucleus…  The Curies searching for radioactive elements… Einstein working out the equivalence of mass and energy…  and in more recent years (the late 1940s and early 1950s), the scientists of many nations assembling atomic reactors for the world of the future.”

Explore pages from the book.  Watch the slideshow: 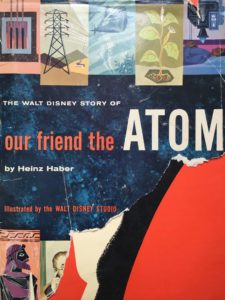 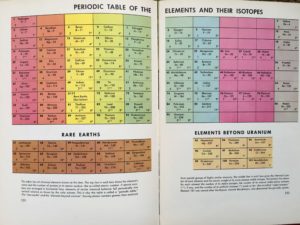 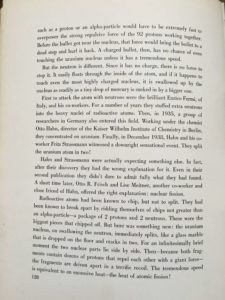 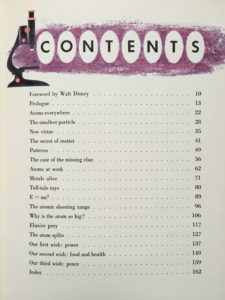 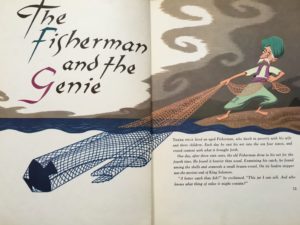 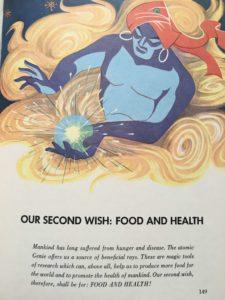 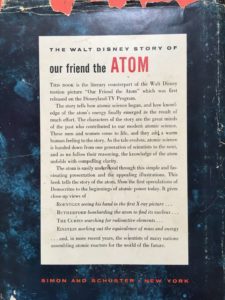 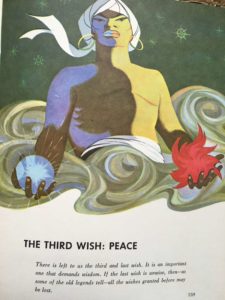 The forward was written by Walt Disney himself:

Fiction often has a strange way of becoming fact. Not long ago we produced a motion picture based on the immortal tale 20,000 Leagues under the Sea, featuring the famous submarine ‘Nautilus.’ According to that story the craft was powered by a magic force.

Today the tale has come true. A modern namesake of the old fairy ship — the submarine ‘Nautilus’ of the United States Navy — has become the world’s first atom-powered ship. It is proof of the useful power of the atom that will drive the machines of our atomic age.

The atom is our future. It is a subject everyone wants to understand, and so we long had plans to tell the story of the atom. In fact, we considered it so important that we embarked on several atomic projects. … Of course, we don’t pretend to be scientists — we are story tellers. But we combine the tools of our trade with the knowledge of experts.

The story of the atom is a fascinating tale of human quest for knowledge, a story of scientific adventure and success. Atomic science has borne many fruits, and the harnessing of the atom’s power is only the spectacular end result. It came about through the work of many inspired men whose ideas formed a kind of chain reaction of thoughts. These men came from all civilized nations, and from centuries as far back as 400 B.C.

Atomic science began as positive, creative thought. It has created modern science with its many benefits for mankind. In this sense our book tries to make it clear to you that we can indeed look upon the atom as our friend.

The prologue hints at the story to come.  The text is to the right of a mushroom cloud – the classic symbol of atomic destruction:

Deep in the tiny atom lies hidden a tremendous force. This force has entered the scene of our modern world as a most frightening power of destruction, more fearful and devastating than man ever thought possible.

We all know of the story of the military atom, and we all wish that it weren’t true. For many obvious reasons it would be better if it weren’t real, but just a rousing tale. It does have all the earmarks of a drama: a frightful terror, which everyone knows exists, a sinister threat, mystery and secrecy. It’s a perfect tale of horror!

But, fortunately, the story is not yet finished. So far, the atom is a superb villain. Its power of destruction is foremost in our minds. But the same power can be put to use for creation, for the welfare of all mankind.

While some of the pages are rather technical -demonstrating radioactive decay curves of elements or the periodic table (with only 101 elements) – the story is then presented in typical Disney fashion as a fable:  The Fisherman and the Genie.  All the while, it is delightfully illustrated in 1950’s fashion. The story concludes with the a dire warning and the prospect for hope:

It lies in our own hands to make wise use of the atomic treasures given to us.  The magic power of atomic energy will soon begin to work for mankind throughout the world.  It will grant the gifts of modern technology to even the most remote areas.  It will give more food, better health – the many benefits of science – to everyone.