For those who love to trawl through the bric-a-brac at garage sales and thrift stores, it’s no surprise that just sometimes you may stumble upon a hidden gem. That’s exactly what happened to Walter Brown. His discovery made such an enormous impact on his life that it set him on a path that he’ll never forget.

Looking at what he’d found carefully, he examined the markings and couldn’t believe his eyes. Who had just left this at a flea market? What was it doing here? Continuing to read the writing on the flag, he could barely contain the heartache that tore through his soul.

His eyes filled with tears, and he slowly turned to his wife. 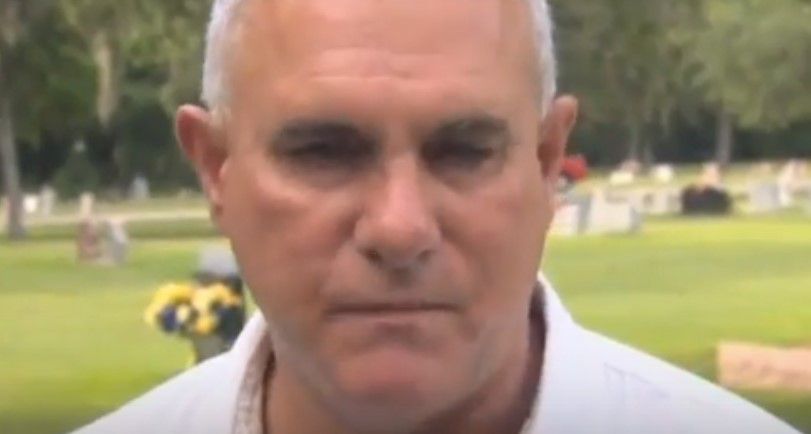 Texas residents Walter Brown and his wife Lanie are all-too-familiar with the U.S. Marines. Walter’s son-in-law has served his country, and before Walter had retired, he had served too. On one particular day, the Browns decided to pay a visit to a local flea market.

They were on the lookout for something specific, but they could never have imagined to be going home with something so monumental. 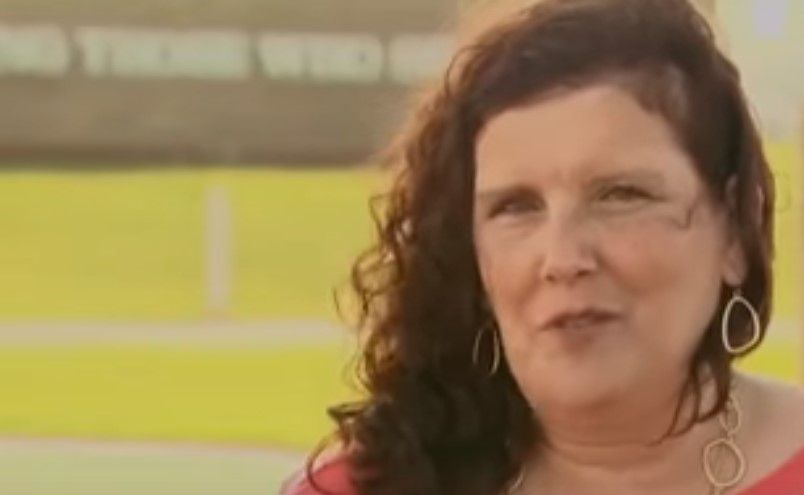 Fred Yahne is the owner of the flea market, and he acquires his stock by buying abandoned storage crates. One day, while he was unpacking one he had just bought, he noticed something rather unusual.

Placing it on the table to inspect later, Fred had no idea that he had just set the stage for a remarkable story. 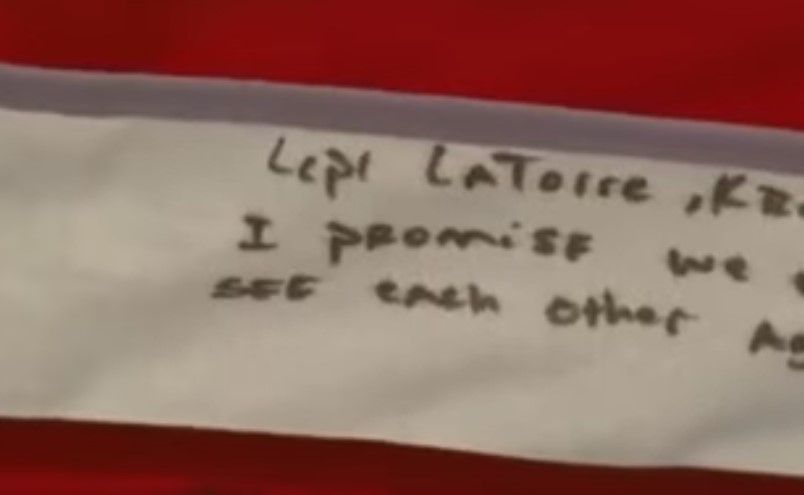 “I didn’t know what it was when I was processing the boxes,” Yahne recalls, “I really wanted to see what it was.”

But by then, the hoards of people had started to arrive at his stall, and his wife had already begun to sell their wares. Yahne, distracted, left his unusual find on the table, and it was quickly forgotten. Walter Brown was lazily browsing through the items on sale when something caught his eye. There was a stack of folded American flags on the table, so he gestured to his wife to come and see. Rifling through the flags, he noticed something strange.

One of the flags looked different from the others, and when he saw why an overwhelming sense of sadness washed over him. 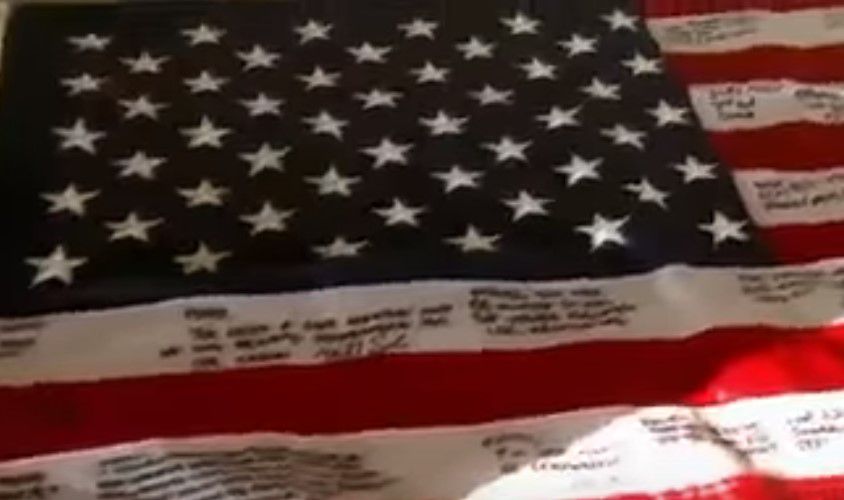 This particular flag had something written on it. Walter started to read, and then he knew that he had to buy it right then and there. Then Lanie read the messages scrawled on the flag and agreed.

The flag had a price tag attached that said it was going for $15, but when the seller noticed that it had been defaced with a permanent marker he lowered the price to just $5.

The Meaning of the Ink 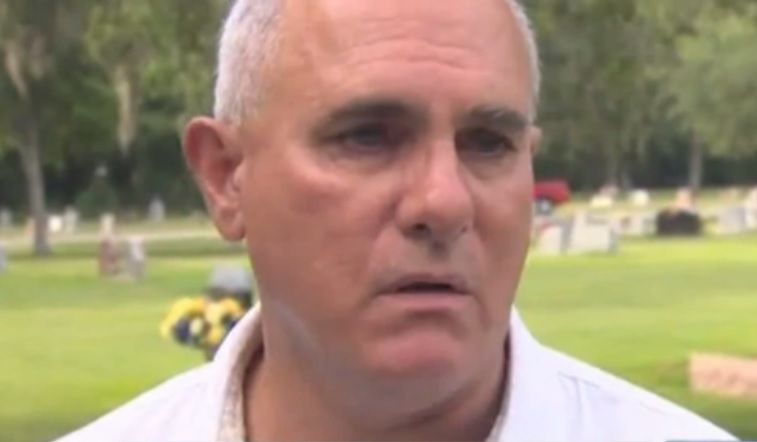 The Browns took their flea market find home, where they immediately unfolded it to get a better look at the writing. When they saw the words ‘Lance Corporal’, they started to get an idea of what they were looking at.

“The rank is specific to the Marines, that’s what caught our eye,” Lanie recalled. They looked closer, and the gravity of what they were looking at hit them with full force. 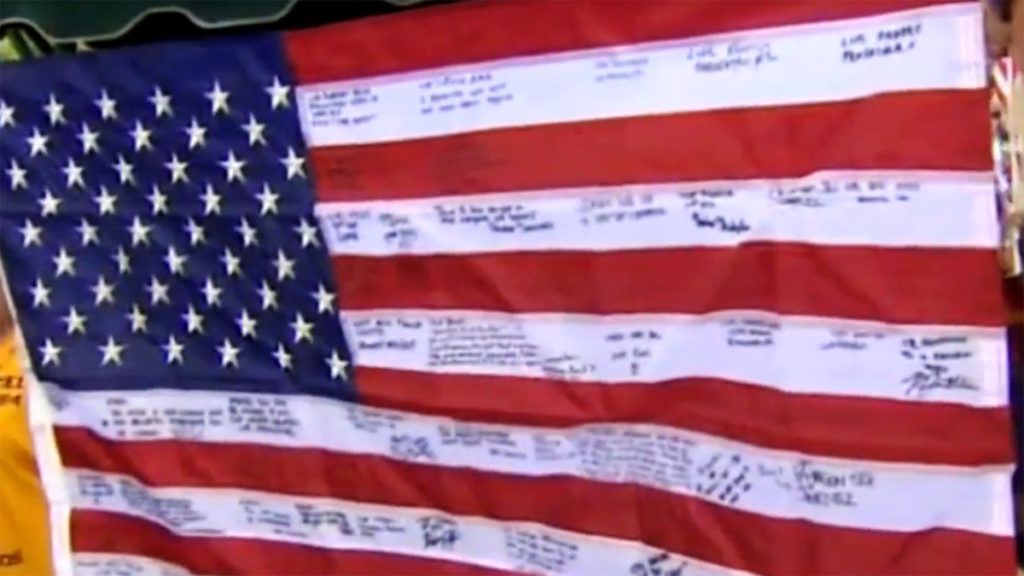 “Fred, you were a good Marine and we will always remember you,” said one message. Another read “Hey CHEEKS, wherever you are, make sure you watch over us.” Every message was addressed to a man named Fred, but what did it all mean? Why were there messaged written on an American flag?

The Browns were confused until their son-in-law explained everything. 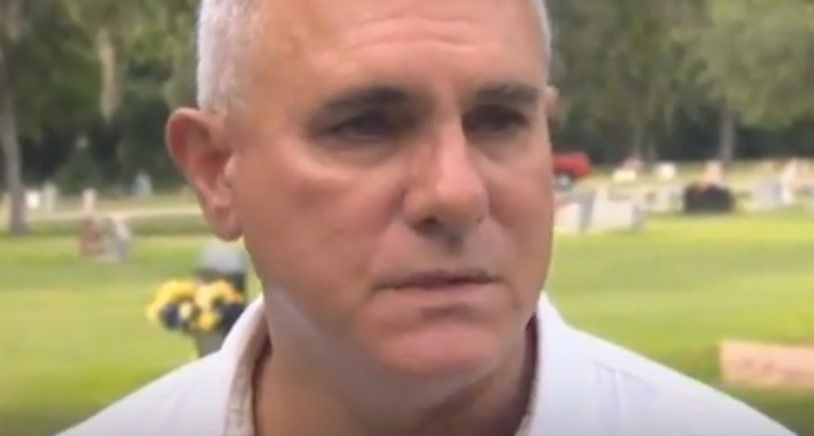 Brown’s son-in-law explains that what they have bought at the flea market is a “tribute flag” that has been signed by the other members of the unit. It is a tribute to a lance corporal who has fallen, and his name was Fred.

Walter Brown is crestfallen at the news. Who is the rightful owner of the flag? Surely it belongs with the fallen hero’s family? And then, he knew just what to do. 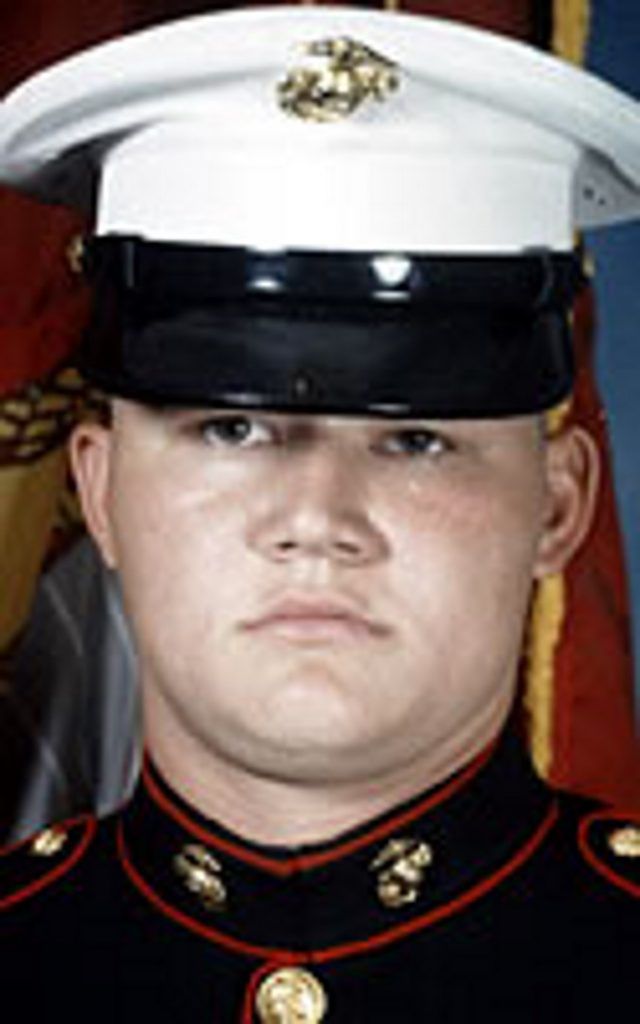 Walter and Lanie Brown then began to make plans to try and get the flag back to the soldier’s family, but it wouldn’t be easy. If they were to find the flag’s rightful owners, they would need help. So they called their tech-savvy daughter, Catie.

She started to search for the soldier’s family on social media platforms, but it was like trying to find a needle in a haystack. 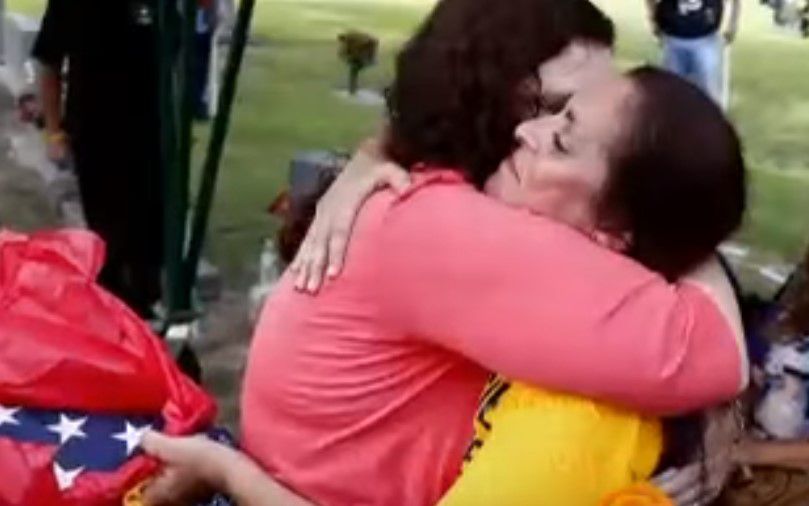 Then, one day, Catie’s search yielded results. She had found a woman named Patsy Maciel, who, to her delight, turned out to be the fallen soldier’s mother. Fred had had the tribute flag made in his honor by his comrades, and Patsy explained to Cate that she had been strongly against Fred becoming a Marine, but he had enlisted against her wishes.

“I cried for three days trying to convince him not to (join)… I lost that fight,” she explained tearfully.

“Doing What He Loved” 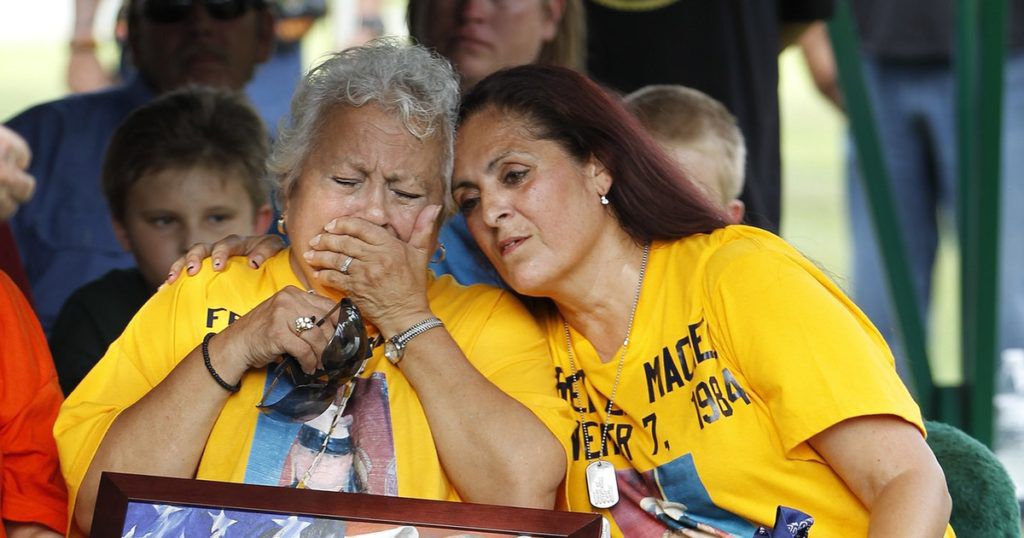 “His dream was to be a Marine, and I had to let him do that. I’m proud of him, that he died doing what he loved,” Fred’s mother said. The tragedy struck in 2013 while Fred had been stationed in Iraq.

Patsy had been shaken awake by her mother, who had been watching TV when she saw the terrible news. Fred had been just 20 years old. 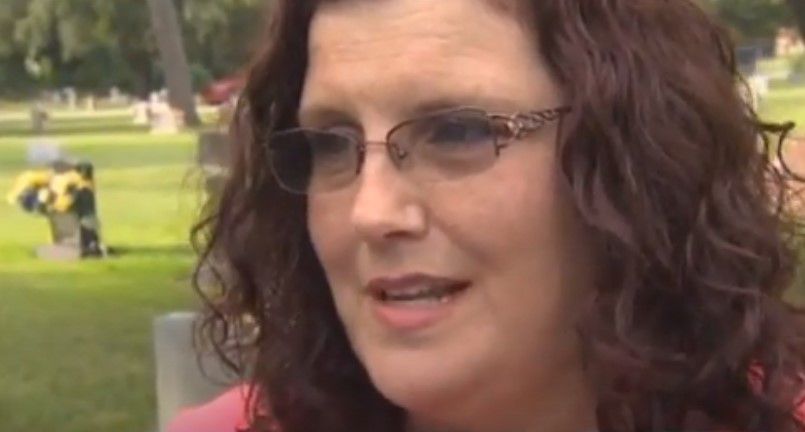 Patsy’s mom saw everything on the news. The helicopter that had been carrying servicemen had crashed outside Baghdad during a severe sandstorm. Suddenly, there was a knock on the door and someone was there to deliver the devastating news about her son.

“For eight years, I was a basket case,” Patsy said. “I didn’t know how to go on without my son.” 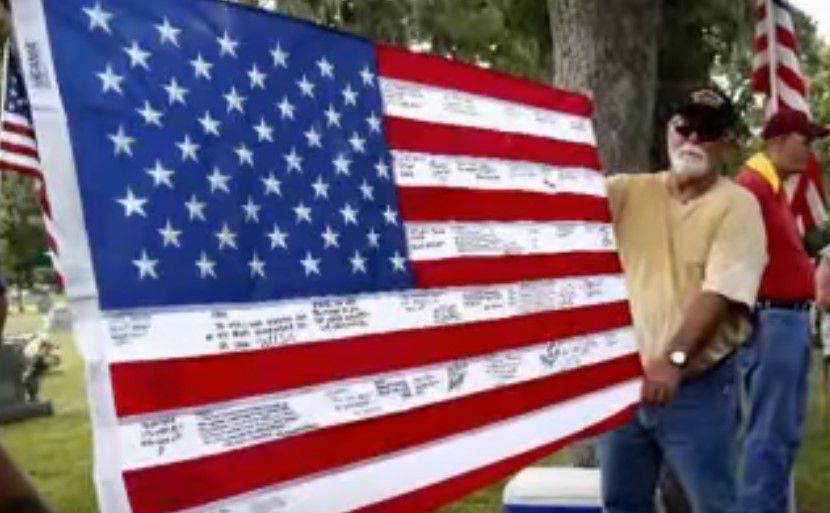 Patsy had been sent her son’s personal effects, but the tribute flag had been missing.

Nobody knows how the flag disappeared, but 9 years later Patsy got the call from Catie. Patsy remembers that call well: “She said I have something of Fred’s I want to give you.” 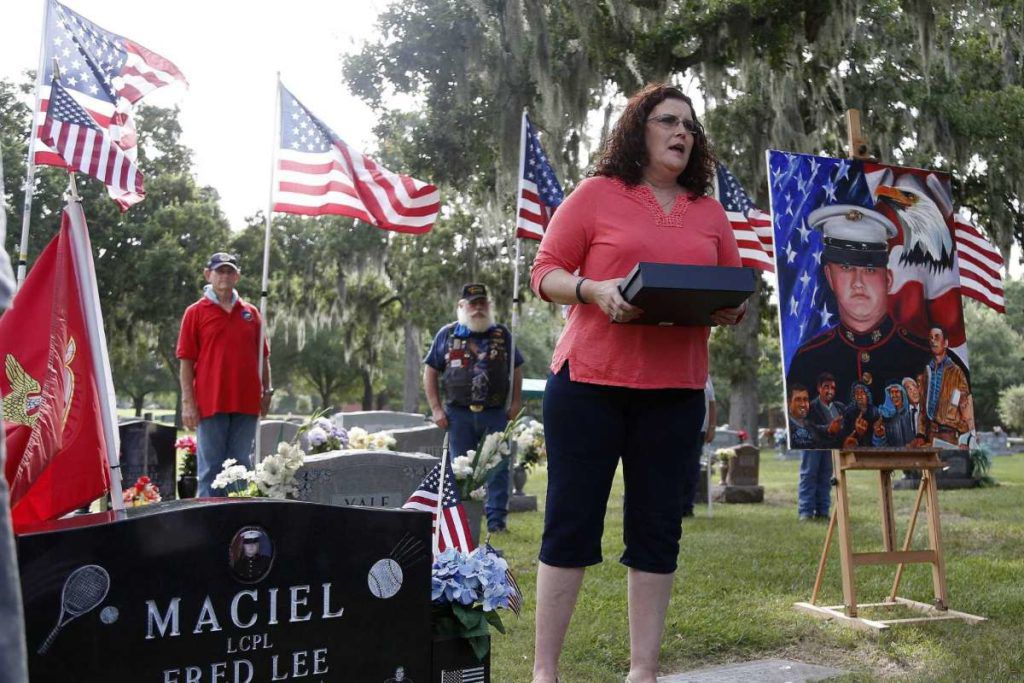 The Brown family decided to drive to Texas, to Fred’s grave at Calvary Hill Cemetery to give Patsy the lost flag in person. “I could have mailed it to you and put it in a box, but I wanted to meet you,” Catie explained.

All of Fred’s loved ones attended the ceremony, and Patsy was astounded when she saw that there were Patriot Guard Riders, as well as Marines present. 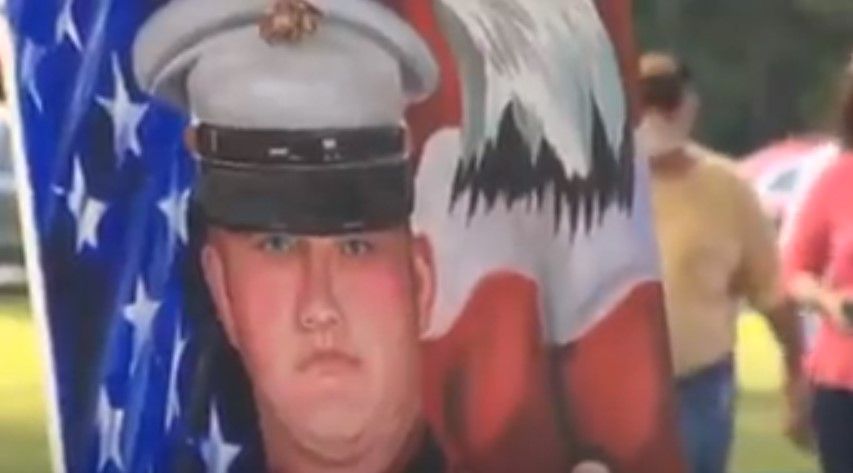 As Walter and Lanie Brown presented the flag to Patsy, Lanie said to her: “Patsy, our family feels so honored to have been chosen to find this flag … Thank you for sharing this piece of your boy with us.”

Walter looked on with tears in his eyes and later said that it was a true honor to be able to give back such an important piece of Fred’s history.

A Piece of Fred 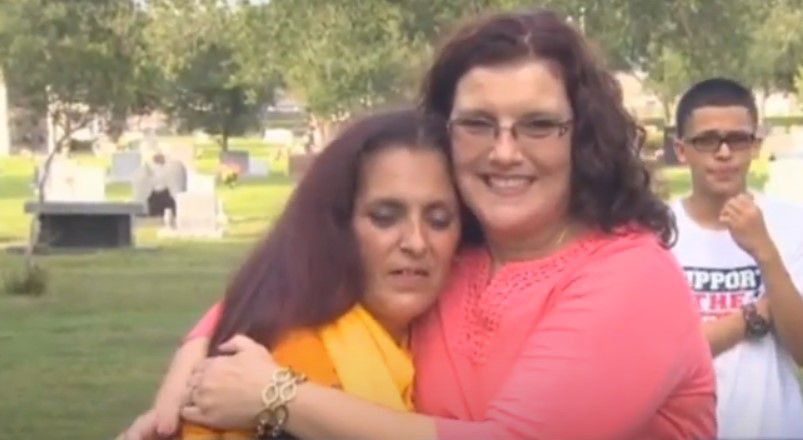 “I’ve got peace in my heart. I’m happy. This is all for my son. Nobody forgot my son,” Patsy said.

“It’ll be with me till I die. This is a piece of my son I’m getting back. It’s a great feeling,” she was overcome with emotion and gratitude. 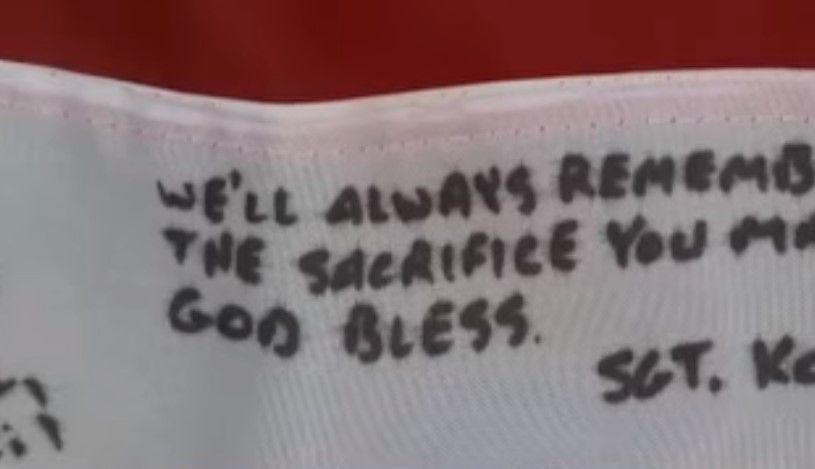 There wasn’t a single dry eye at Fred the fallen hero’s tribute. Patsy was completely overwhelmed with the compassion, support, and love she experienced that day as they all paid tribute to her son.

The incredible story of how her son’s tribute flag found its way back to her surely must be due to fate. 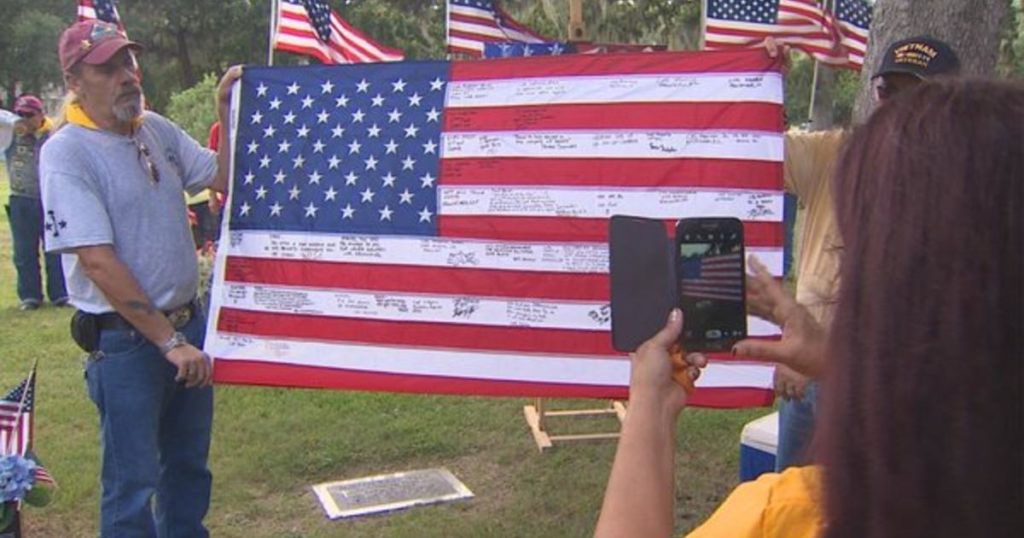 Lee Nelson, Fred’s cousin, also expressed his gratitude to have the flag back: “It was amazing to come to my family like this. It’s funny how things work out,” he explained.

And all this happened because Walter and his wife were browsing in a flea market and had happened to stumble upon the flag. Walter instinctively just knew that it was something special about it. 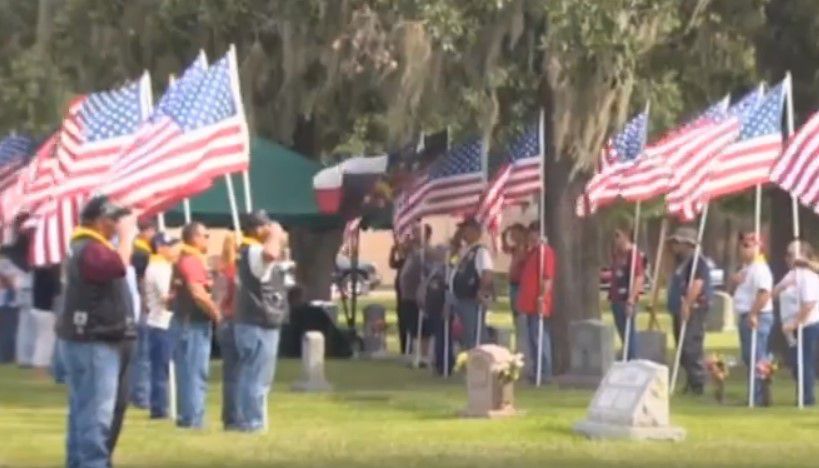 The Browns had been determined to restore the tribute flag to its rightful owner, and by doing so they had restored Fred’s mother’s faith in humanity. The poor mother had thought that the flag had been lost forever.

Two families were united that day, and Patsy and Lanie remain good friends. Lanie said later: “I was real blessed that both of my boys came home in one piece and I have a huge responsibility to her,” It just goes to show that there are good people in the world, and sometimes fate conspires to bring them together.