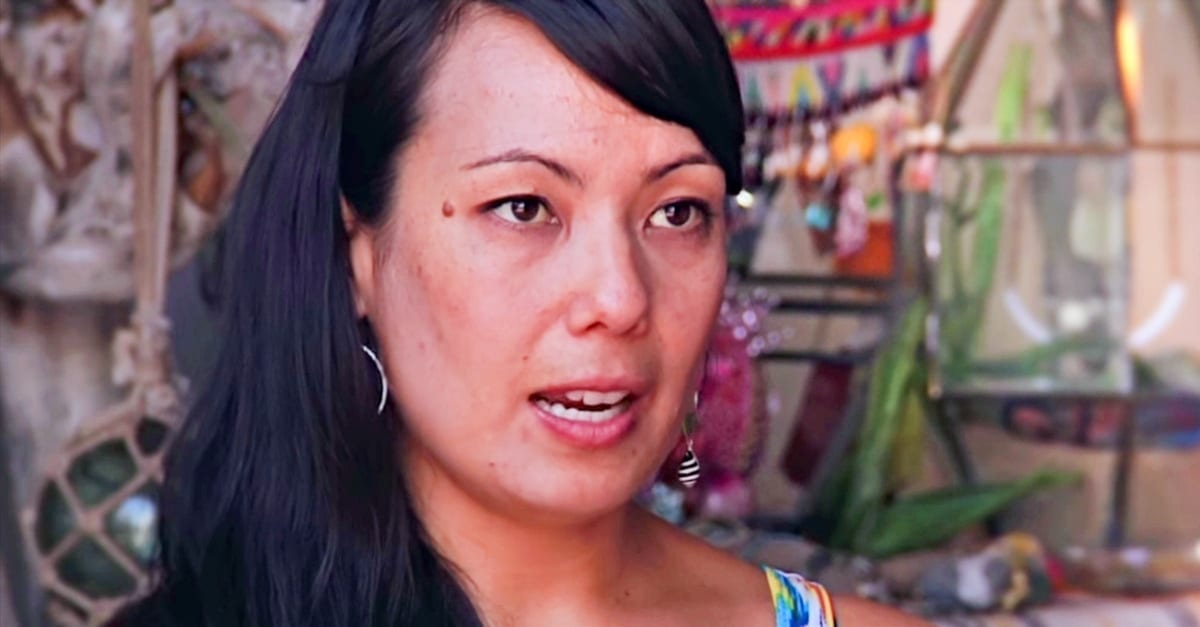 A Canadian mother bought her son what she felt was an adorable t-shirt, however, not everyone shared her view. She was confused when one of the moms from her son’s playgroup contacted her to complain about the shirt. 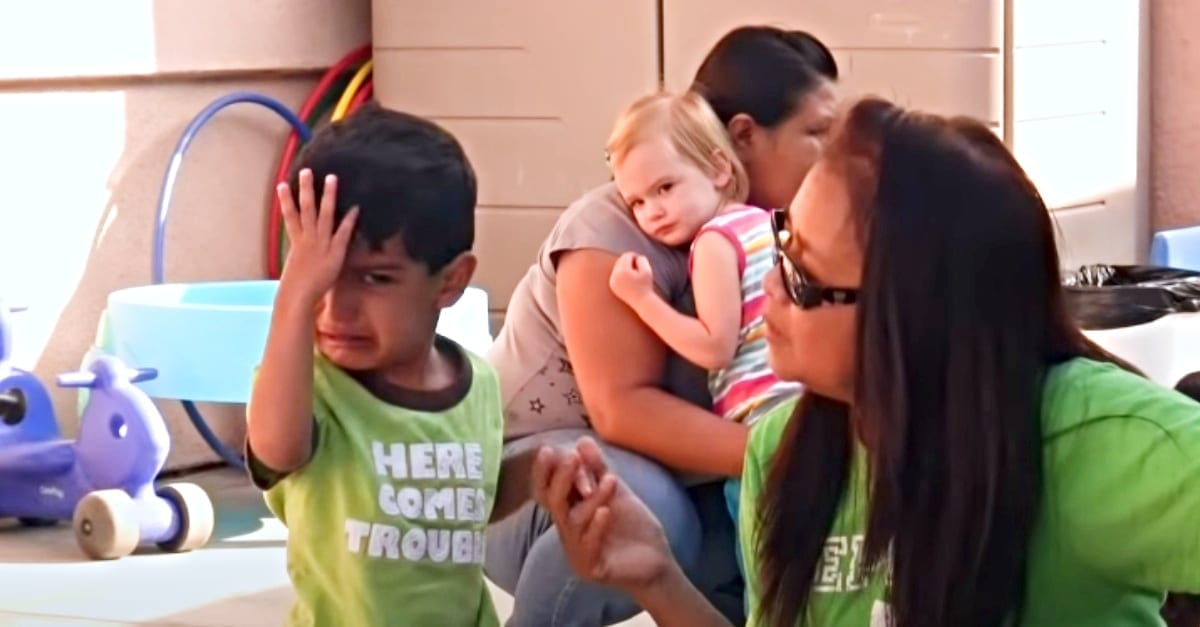 The nonplussed woman shared her story on Reddit and shared the rude text exchange between her and the other mother. The other woman stated that she was ‘unimpressed’ by the ‘rude’ and ‘demeaning’ shirt that the boy had been wearing.

To make matters worse she decided to insist that the boy not be allowed to wear the shirt again. 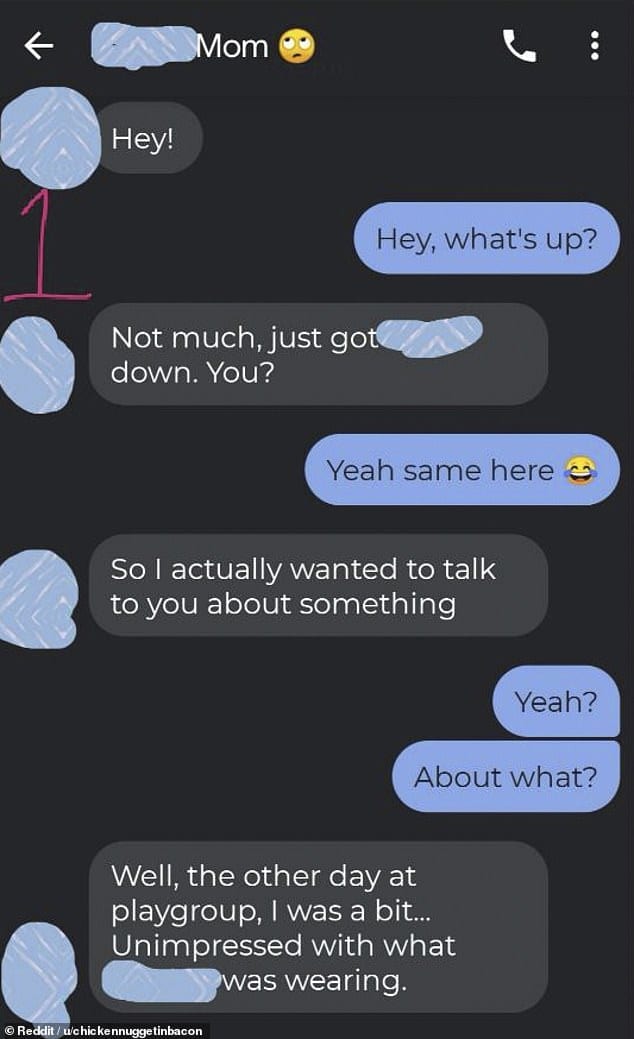 At first, things started off quite civilly when the other mom told her that she wanted to talk to her about something. ‘Well,’ she wrote, ‘the other day at playgroup, I was a bit… Unimpressed with what [your son] was wearing.’ 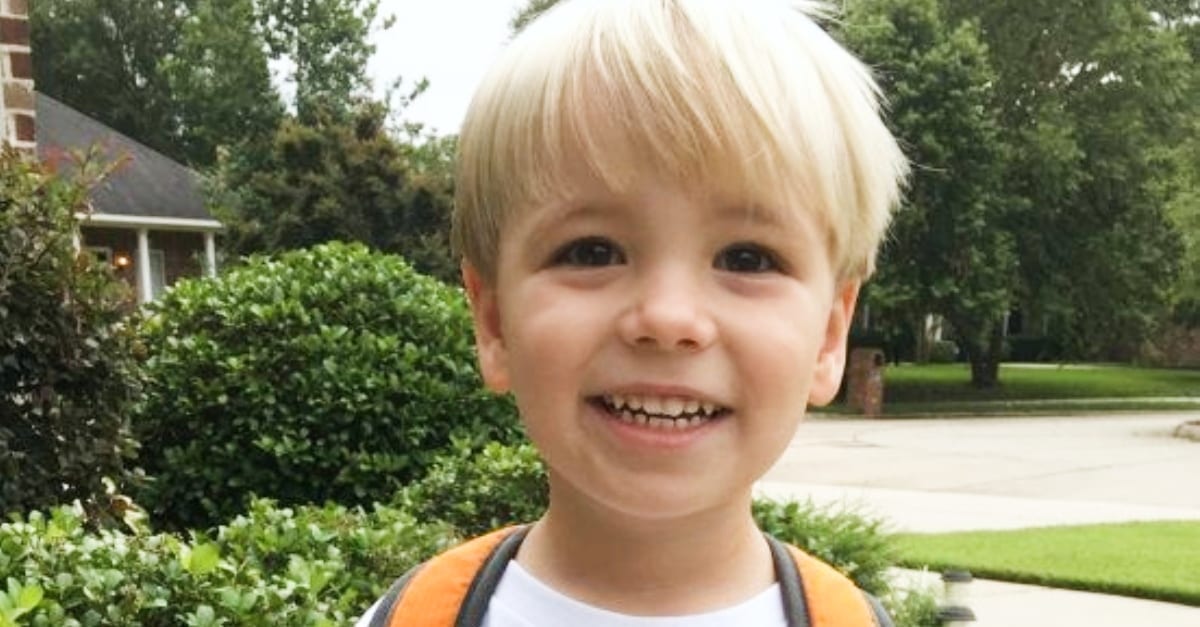 ‘I’m sorry?’ the woman replied. ‘What was wrong with it?’ ‘I mean… it was just demeaning to boys don’t you think?’ the other mom asked. Then the boy in question’s mom insisted that she had no idea what the problem was, the other mother replied that the shirt saying ‘Players Gonna Play’ was ‘rude’. 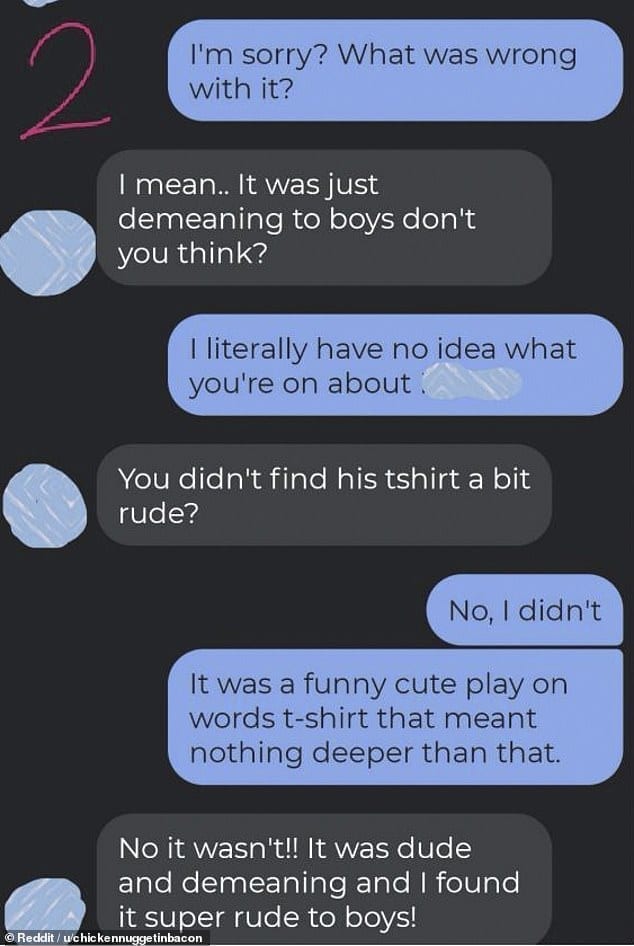 ‘It was a funny cute play on words t-shirt that meant nothing deeper than that,’ the Redditor stated. ‘No it wasn’t!!’ the offended mom replied. It seemed as if she expected the boy’s mother would simply give up and apologize.

‘It was rude and demeaning and I found it super rude to boys!!’ the offended mother insisted. 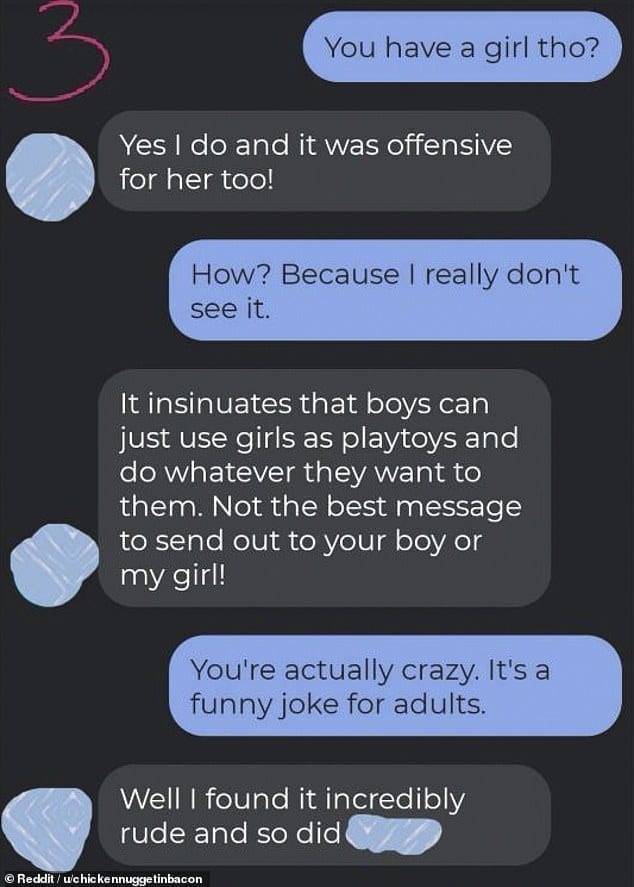 The Redditor pointed out that the other mother had a daughter and not a son, she insisted that the shirt ‘was offensive for her too! It insinuates that boys can just use girls as playtoys and do whatever they want to them. Not the best message to send out to your boy or my girl!’ she said.

The other woman insisted that both she and her two-year-old daughter both found the shirt to be ‘incredibly rude.’ The Redditor couldn’t believe what she was reading. ‘Wow, I didn’t even know [your daughter] could read. Y’know since she only 2,’ she shot back.

The other woman refused to relent, however. 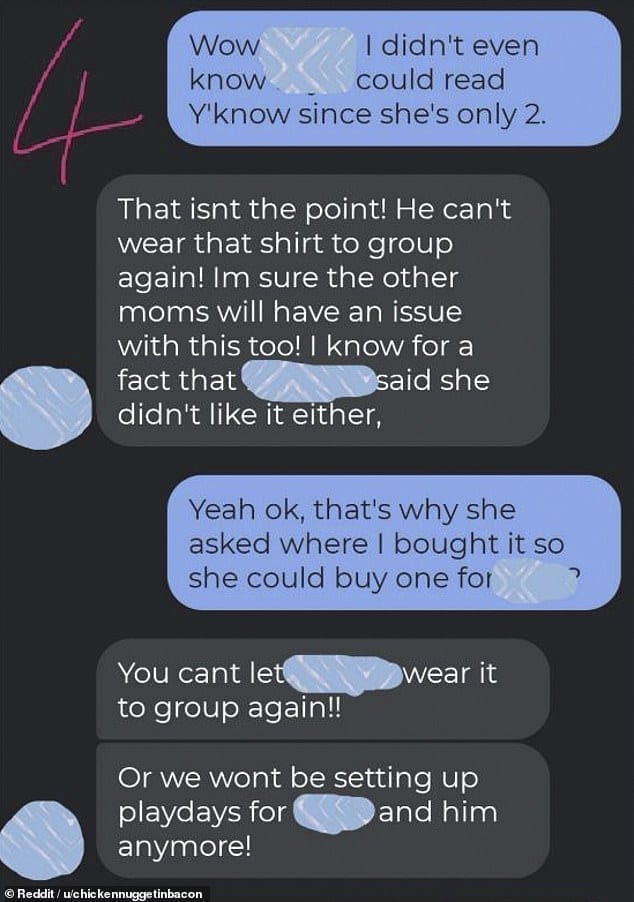 ‘That isn’t the point!’ said the girl’s mother. ‘He can’t wear that shirt to group again! I’m sure the other moms will have an issue with this too! I know for a fact that [other mom, name redacted] said she didn’t like it either.’

However, the boy’s mother responded with something that incensed the woman even more. 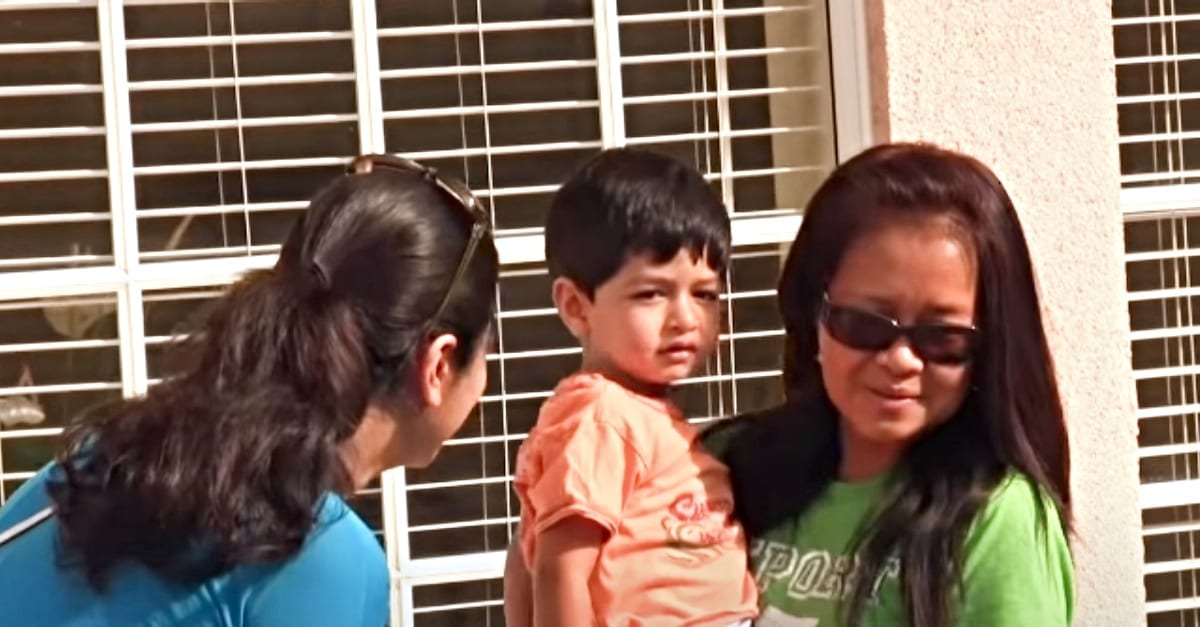 When the Redditor said that that other mother had actually asked where the shirt was from so she could buy one, too, the angry mom lost it. ‘You can’t let [your son] wear it to group again! Or we won’t be setting up playdates for [my daughter] and him anymore!’

‘Honestly I couldn’t care less,’ the Redditor said, finally going off. ‘You’re very inhospitable hosts anyway, you’re too stingy to even let [my son] drink some of your homogenized milk when we come over, you rarely let him or I snack and you hate to pay for things when we meet up outside. 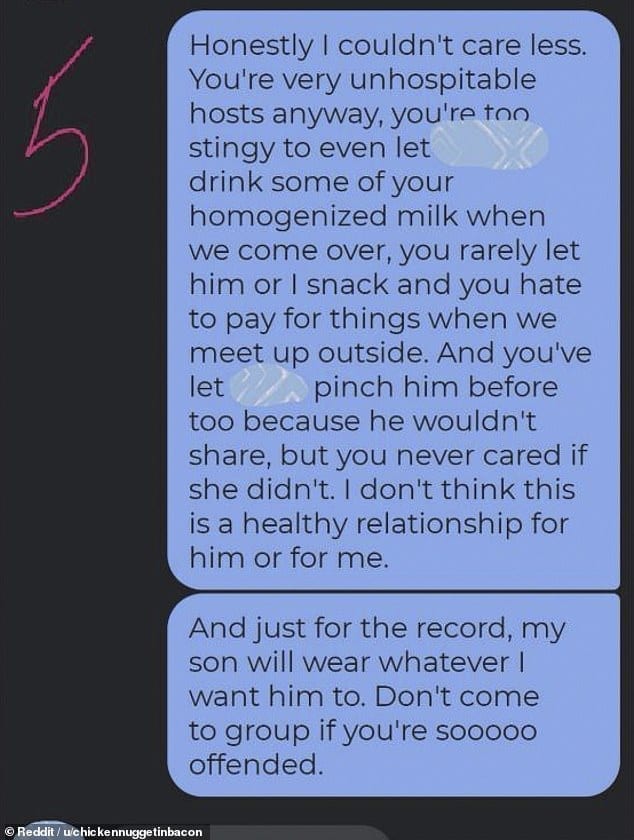 ‘And you’ve let [your daughter] pinch him before too because he wouldn’t share, but you never cared if she didn’t. I don’t think this is a healthy relationship for him or me. ‘And for the record, my son will wear whatever I want him to. Don’t come to group again if you’re soooo offended.’ 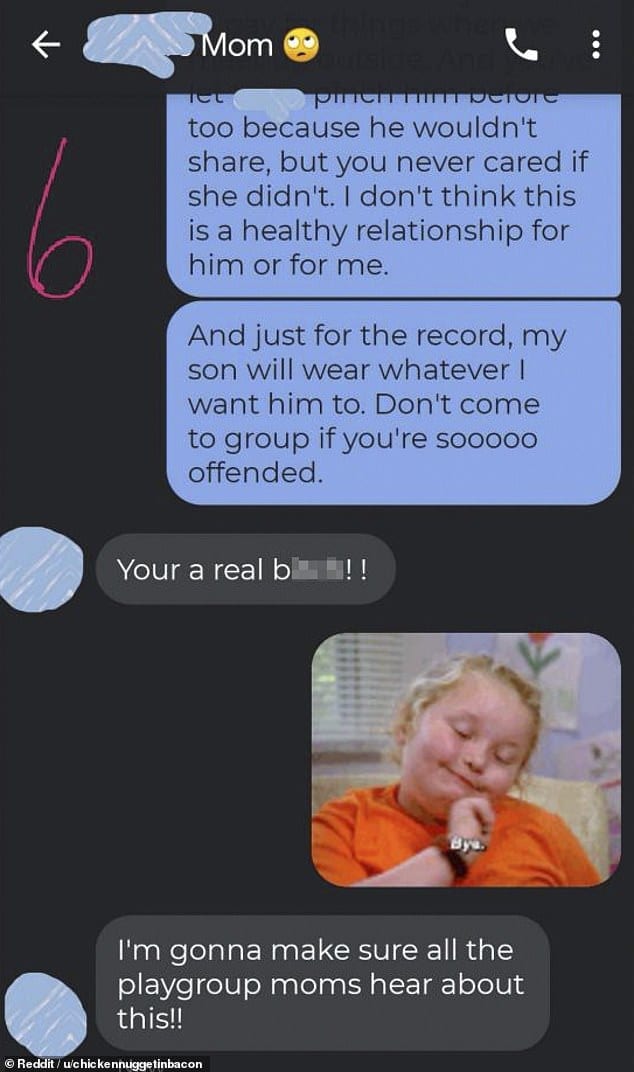 Thus called out, the angry mom replied: ‘You’re a real b****! I’m gonna make sure all the playgroup moms hear about this.’ The Redditor, for her part, replied with a smug meme of Honey Boo Boo. 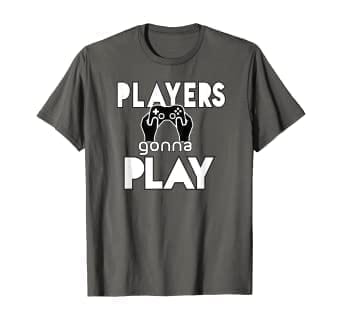 Speaking in the comments, the Redditor went on to explain that the T-shirt also had a picture of an X-box controller, so there was no confusion over what ‘play’ meant. She also said she’s known the other mother for a year now, and ‘her and her daughter have been so horrible to us since we starting setting up Playdates and other things.

‘She’s bitten him, pinched him, pushed him, and because he has Apraxia he can’t really say anything back about it. I’ve just had it with her. ‘She’s told me before that I’m just not trying enough with his speech, told me that his ginger hair makes him souless, that his curls are tatty etc. So I just had it.’