She looked closer at the DVD case. There was something inside, rattling around, and the clear plastic bulged. She opened it carefully, and the letter that had been stuffed inside the narrow box unfurled slightly, causing it to spring to the floor.
At first, she thought someone had left the letter inside by accident…but when she read it, it was all too obvious that it was meant for her. 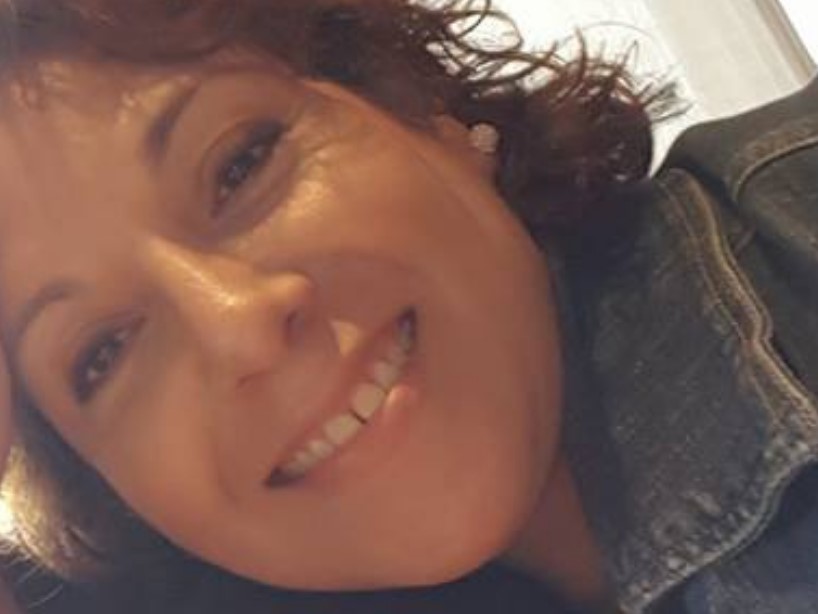 Mrs. Robledo had had a long, tough day. So, when she stopped for a few basics at the local supermarket in San Antonio, she decided to rent a movie from Redbox.
She went through all the listings until a title caught her eye, pushed her dollar note into the machine and waited for her DVD to fall through the slot. Eager to get home and relax, she stuffed the DVD into her handbag and hurried home–unaware that someone had other plans for her. 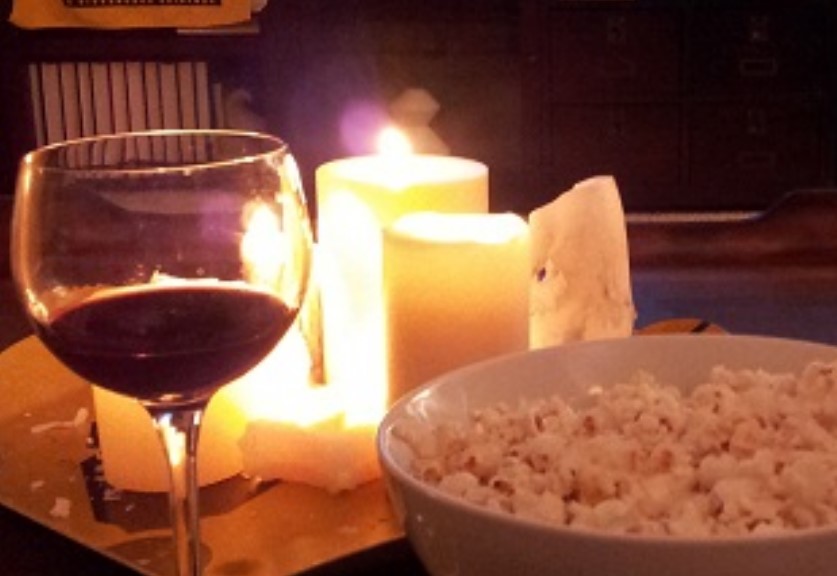 Upon her arrival at her home, Mrs. Robledo poured herself a drink, set some popcorn in the microwave, and settled in to watch Deepwater Horizon.
She opened the DVD case like she had done a hundred times before but immediately noticed that this DVD was different — there was something else hidden inside, and her eyes widened 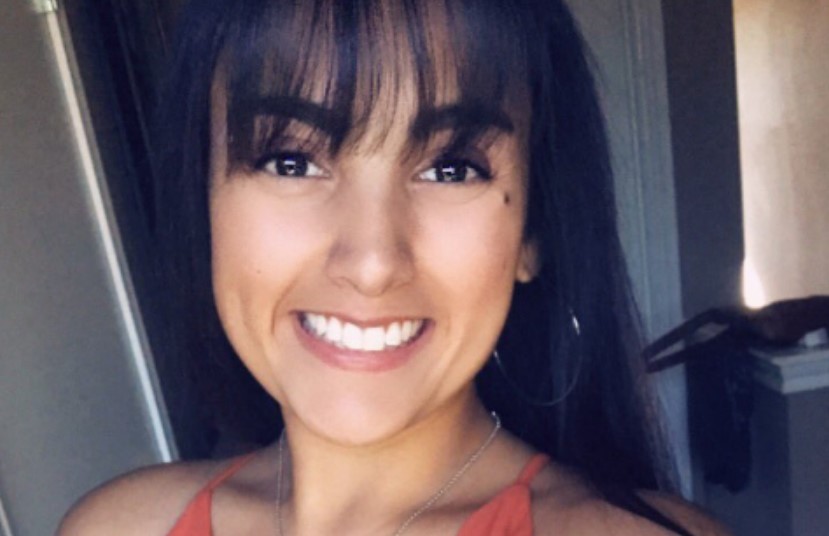 Mrs. Robledo’s daughter, Elizabeth, was the first to hear about what her mother had found inside the Redbox DVD case. Her voice stammered down the line, and she had to ask her to repeat what she had said several times.
When her mother finally calmed down, she said: “I found money inside my DVD rental!” 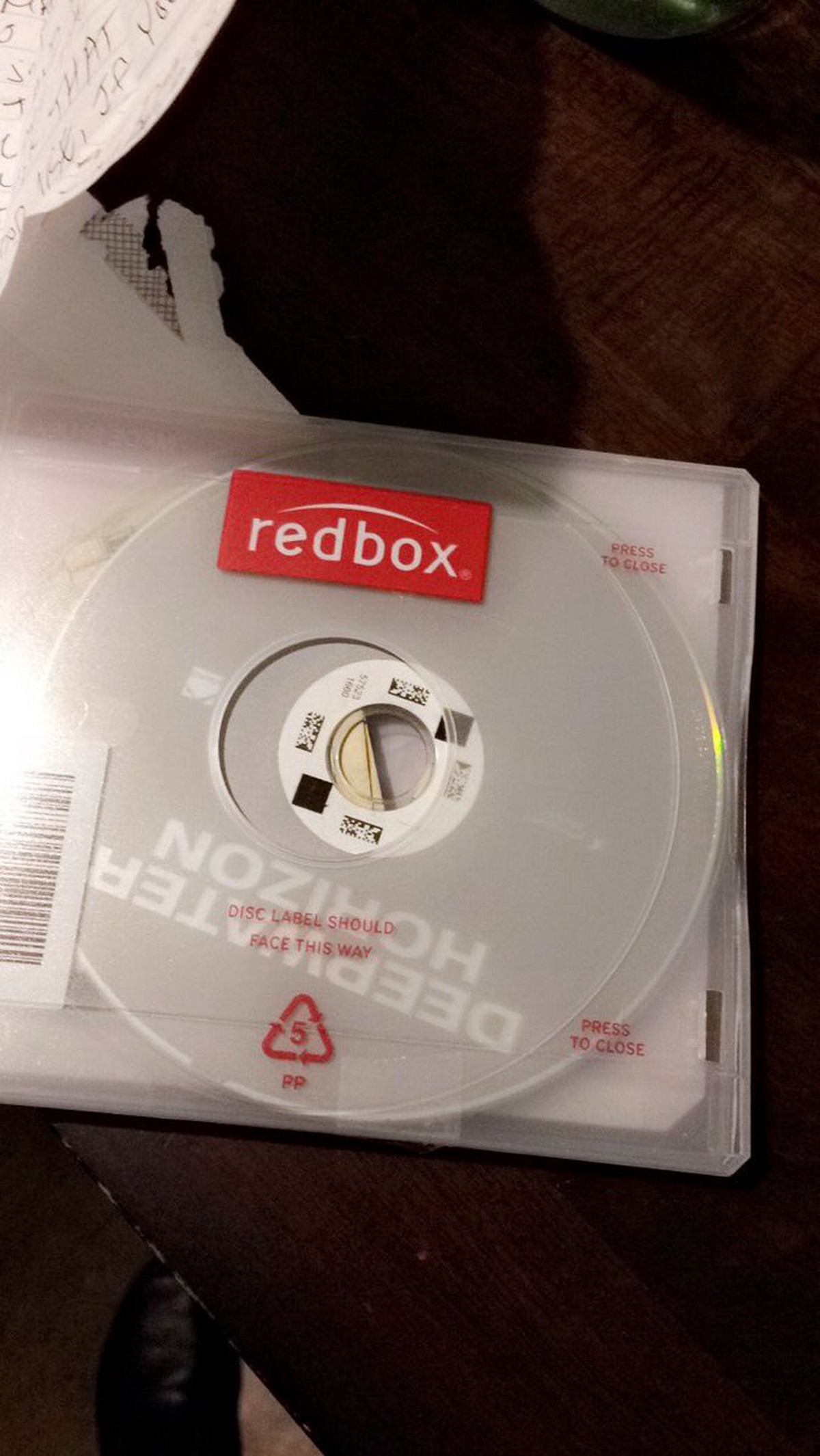 Mrs. Robledo sent Elizabeth a photo that she had taken with her phone’s camera.
Sure enough, there were five 20-dollar bills that had been stuffed into the DVD case–$100 dollars in total! Perhaps someone had not known how the penalties for late returns worked at Redbox, Elizabeth speculated. But what her mother said next had her scrambling for her phone. 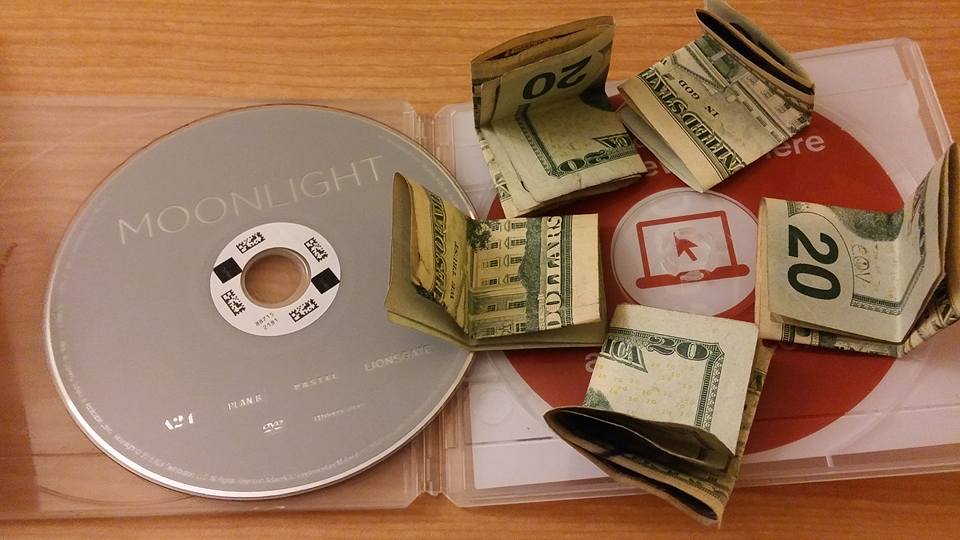 Who would do such a thing? And why? Elizabeth was bursting with questions. “How much money, Madre?” she asked excitedly. Then suddenly, her mother fell silent. She heard the rustling of paper, and when Mrs. Robledo shakily started to speak again, Elizabeth strained to hear her.
“There’s a letter!” she explained. And then she started to read. 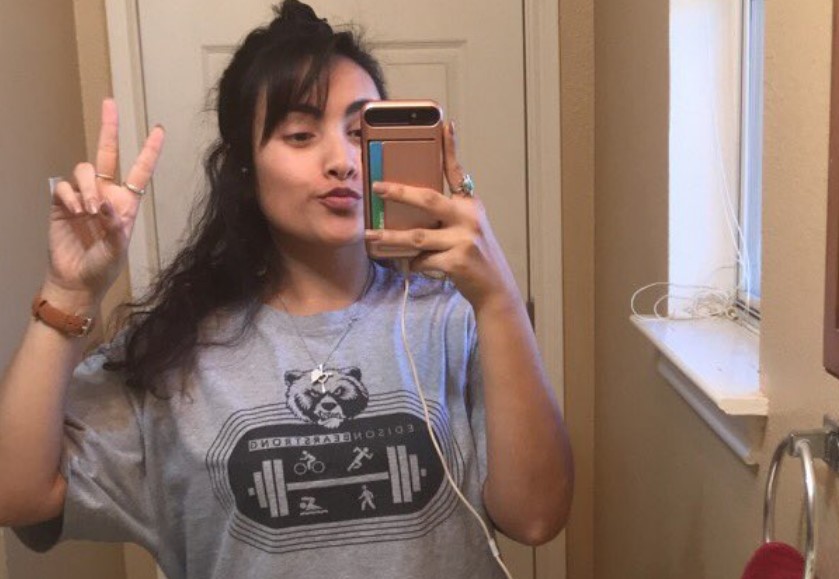 “Hello! My name is Marcos…” Mrs. Robledo read. Elizabeth waited on the line with bated breath. Who was Marcos? She wracked her brain, trying to remember if she knew anyone by that name…she couldn’t think of anyone.
But when Mrs. Robledo finished reading the strange letter, Elizabeth couldn’t hold her tears back any longer. She asked her mother to send her a photo, and she immediately posted it on Twitter to share her mother’s strange DVD case finding with the world. She secretly hoped that the person who had written this note for her mother would come forward.
So, what did the letter say that had Elizabeth in such a frenzy?

The letter indicated that the money had been placed in the DVD case deliberately, but why? And how did the mysterious person know that it would even be found?
The rest of the letter explained the mysterious man’s intentions, but even after her mother had finished reading it to her, Elizabeth was still puzzled. 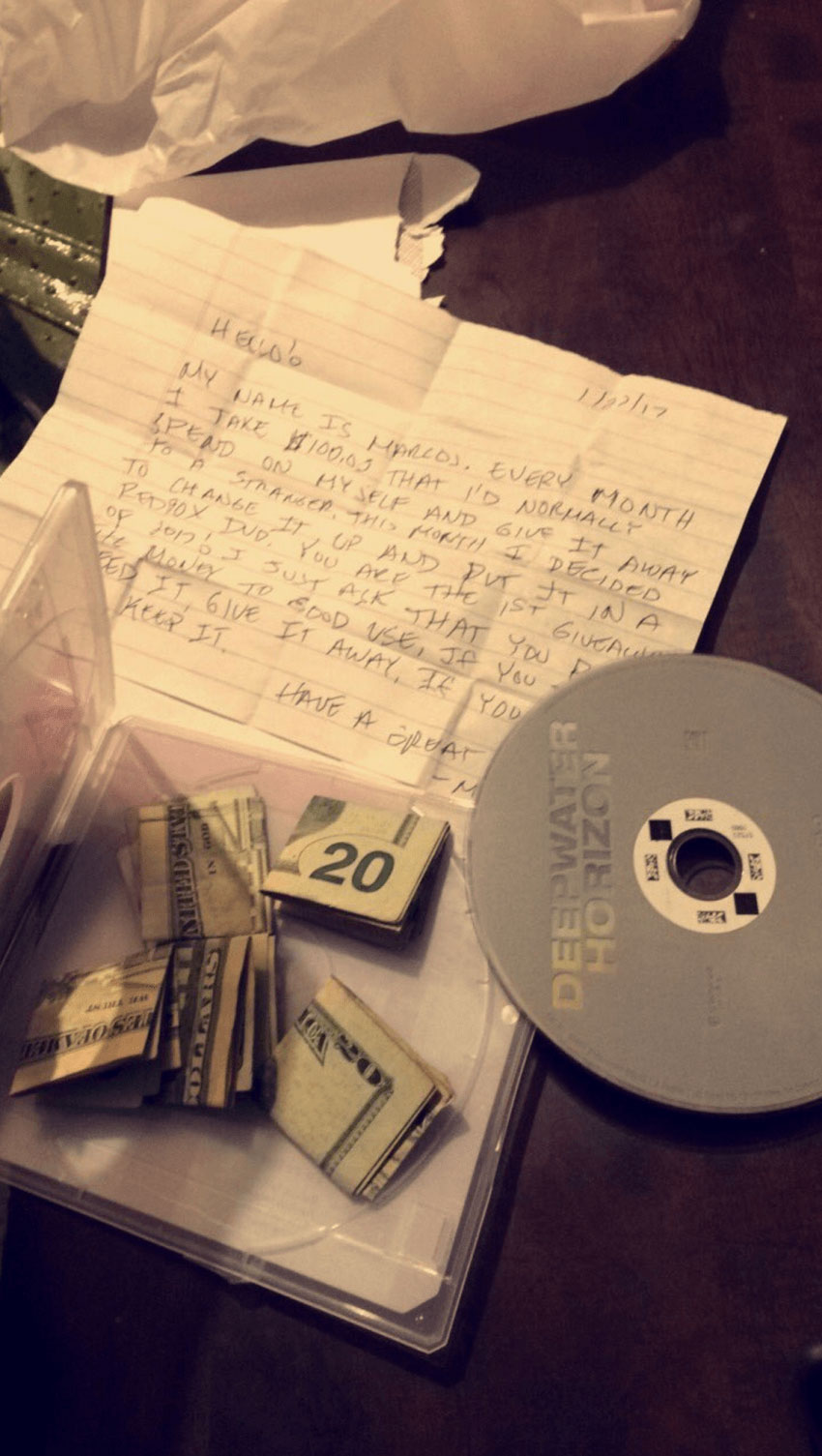 “Hello! My name is Marcos,” the letter said. “Every month I take $100 that I’d normally spend on myself and give it away to a stranger. This month I decided to change it up and put it in a Redbox DVD.”
And then the letter went on to describe exactly what Mrs. Robledo needed to do with the five $20 bills. 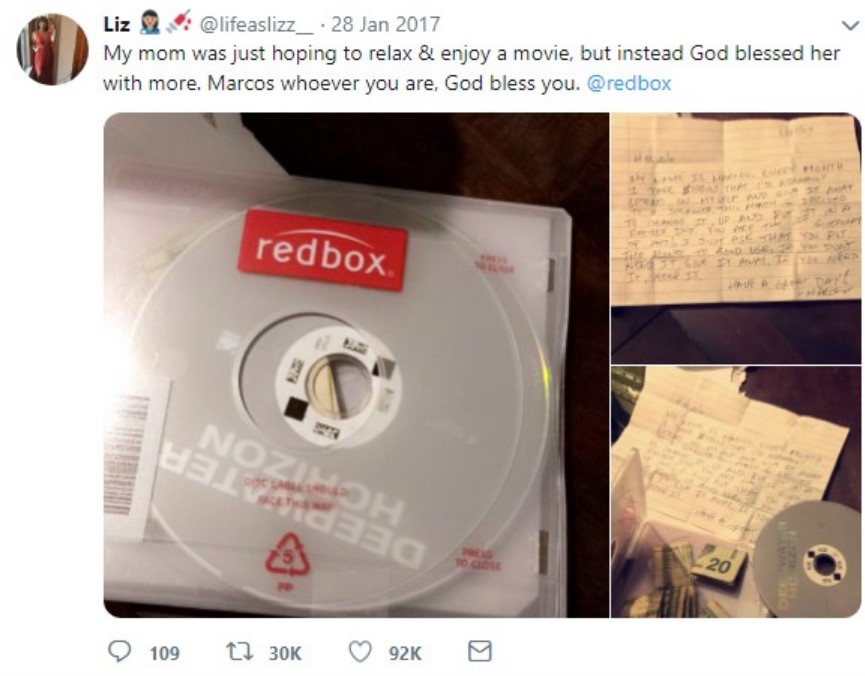 “You are the first giveaway of 2017! I just ask that you put the money to good use. If you don’t need it, give it away. If you need it, keep it. Have a great day! —Marcos.” Elizabeth gaped in disbelief.
As soon as she posted the picture of the random act of kindness on Twitter, it exploded. 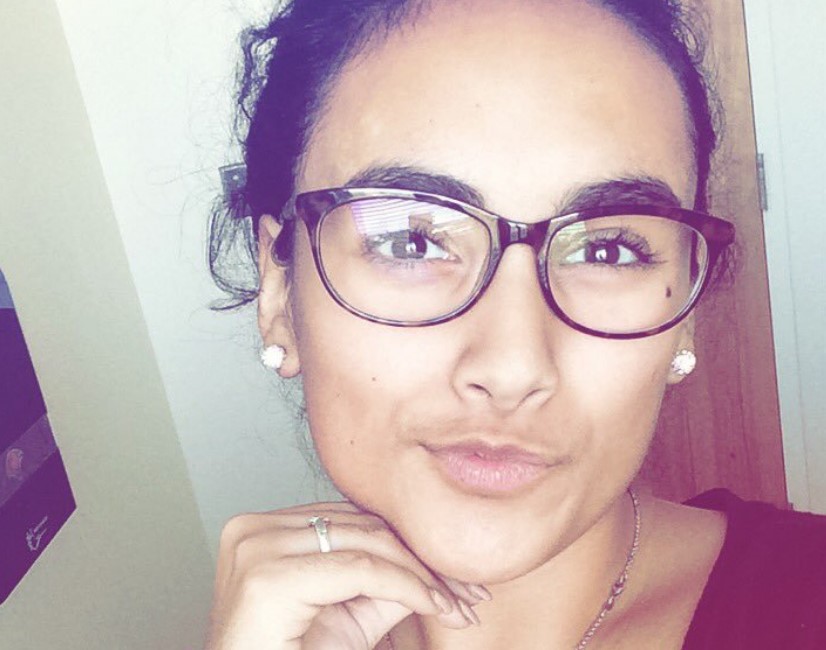 Soon Elizabeth’s post had over 32,000 retweets and 100,000 likes! People just couldn’t believe that a stranger would do something so thoughtful for someone he had never even met.
Then, the post caught someone’s eye, and she immediately sent it to her uncle. Little did Elizabeth know, the mysterious man was about to reveal himself. 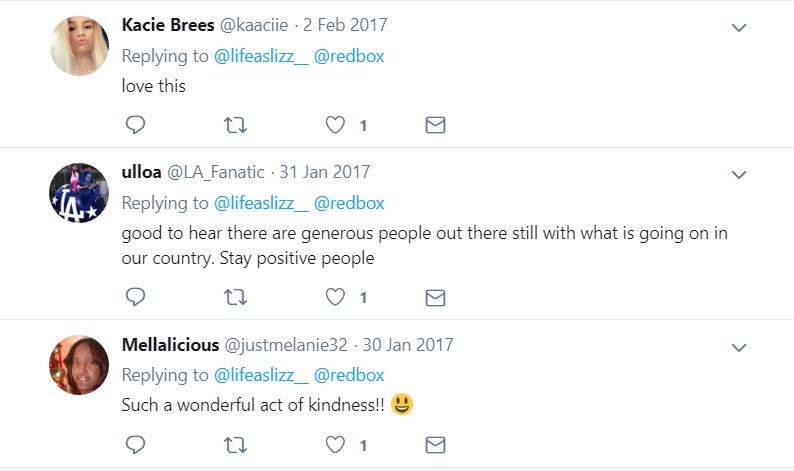 One day, shortly after she had posted her mother’s story, someone unexpected commented: “The internet is a small world! My niece saw your tweet in her feed and sent it to me. Glad I made your mom’s day!”
It was none other than the man who had placed the $100 and the letter inside the Redbox rental for some lucky soul to find — but this wasn’t the first time he had done something like this.

Marcos Campos had been placing $100 and an uplifting letter in DVD rental boxes all over the city. He documented his random acts of kindness on his Facebook page with photos of the DVDs and the dates he returned them with the items inside — his goal was to complete 76 random acts of kindness every month.
You’d think that Marcos had the cash to spare, but you’d be wrong. 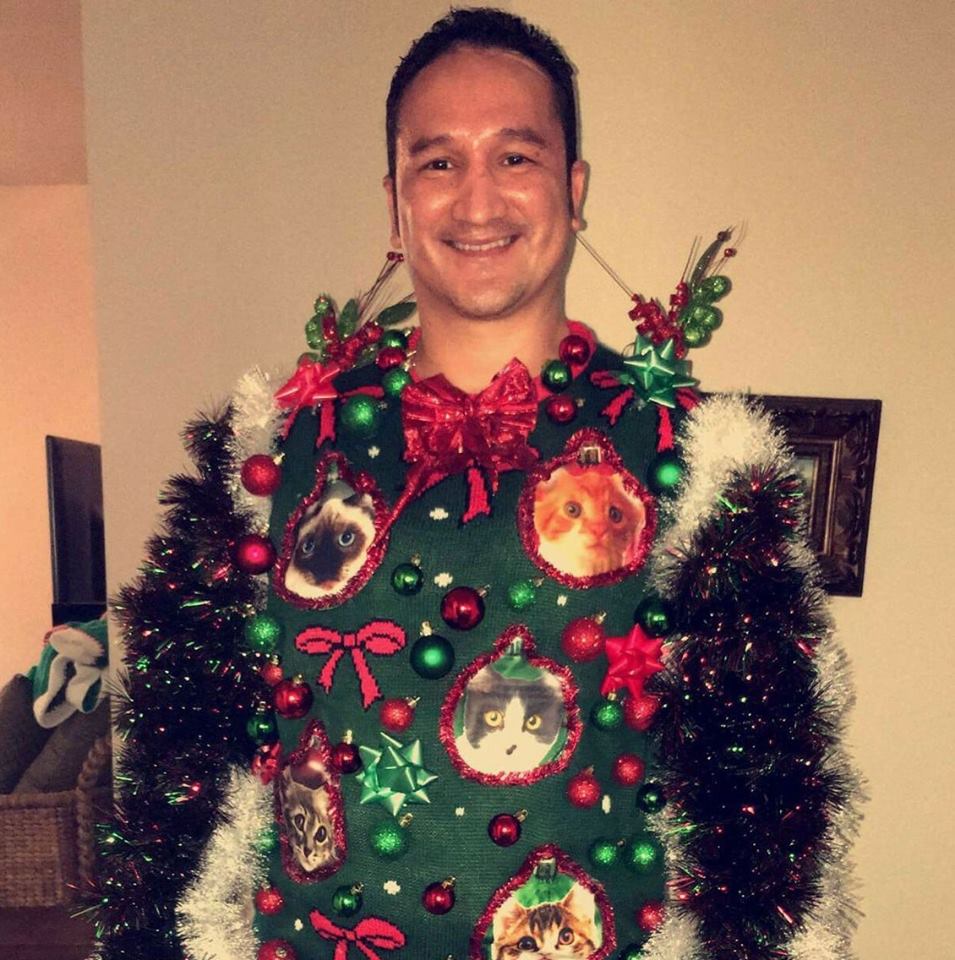 Unfortunately, Marcos found himself in a tough spot recently when he was laid off from his job. “I was paying off student lunch accounts,” Marcos said in an interview. “And that was something meaningful. I was sad that I had to stop doing them. But I can’t afford them. I can’t afford my own bills.”
But then something unexpected happened. One of Marcos’s last acts of kindness was directed at a hairdresser named Janie Hernandez, who was undergoing treatment for cancer. Unfortunately, she couldn’t afford her medical bills — so Marcos decided to make her the recipient of his $100, and he wrote her a touching note encouraging her to stay strong.
Marcos’s encouragement was all she needed.


Helping Those In Need “It lifted my spirit,” Janie explained. “It lifted my spirit to know that there’s still people out there who are genuinely nice and want to reach out to us.” And that’s when she decided to do something kind for Marcos in return.
With the help of Fox’s Ryan Wolf, they planned a surprise for him. Janie reached out to Cash For Kindness, an initiative that is dedicated to helping people in need. And who could be more deserving than Marcos? When Marcos entered Janie’s salon, he had no idea that his luck was about to turn around.
His kindness was about to be rewarded in the most spectacular way. Janie turned to Marcos and said: “You helped me in my dark moment. And I know that you’ve helped different random people in their dark moments, and I’m sure you made a big difference in their lives. And so, I know you’re going through some tough times, and I just want San Antonio to know that there are angels out there like yourself.”
She continued,”…and so, I think this time around we need to help people like you and learn to be more like you. So, I choose you as a recipient.” Then Fox reporter Ryan Wolf said: “In all the years of us doing this, we’ve never had somebody randomly give us much and as beautifully as you. So, because of your kindness, we want to give back to you. Would you put your hand out for me?” and handed Marcos a stack of $100 bills!
Marcos counted it, and exclaimed: “A thousand dollars! I don’t know what to say. I thank you. And I thank you. This is a lot. I don’t think what I did deserves this, but I’ve learned in this experience to accept help when people offer.” “I’m a little shocked,” Marcos explained. “I was not prepared for this… I thought I was coming here to do something for you, but I really don’t know what to say. I’m touched.”
Marcos tearfully said that the Cash For Kindness initiative has allowed him some breathing space in his desperate time of unemployment, but with his recent Twitter stardom, surely he will be snapped up by a prospective employer!
Must Read
Three Indigenous Tribes In The United States Will Get $75 Million For Relocation Due To Climate Change
A New Supercomputer Simulation Animates An Incredibly Accurate Look At Universal Evolution
Genome Studies Manage To Find A New Branch Of Fungal Evolution