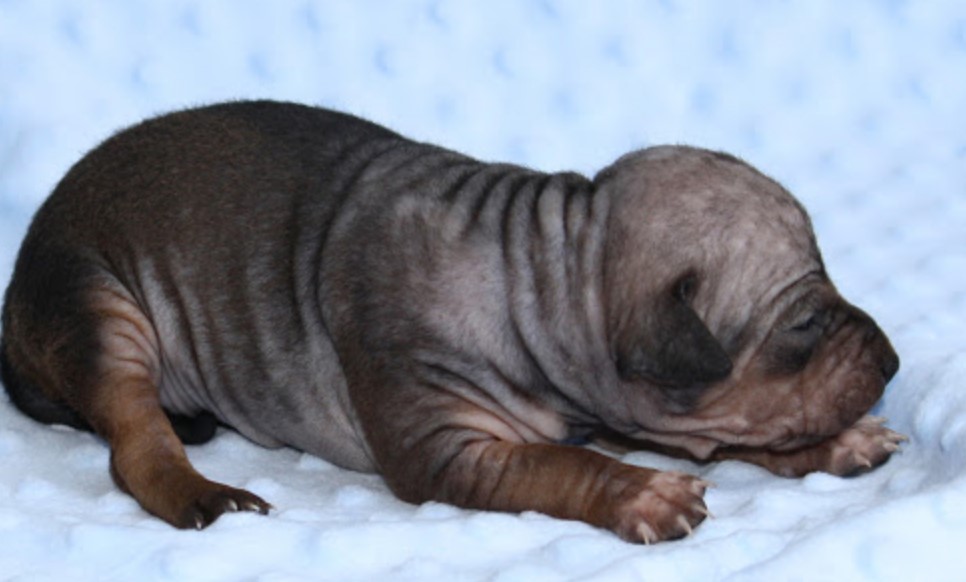 Su Yun thought she knew what she was getting herself into. She had done the research, read the reviews, and familiarised herself with hypoallergenic dog breeds. She had decided on a Xoloitzcuintli — a hairless dog from Mexico. She thought they were ready for the commitment. But as he began to outgrow his bed and collar and lead, she began to worry. Then, the unimaginable happened.

With bags packed and ready for their eagerly-awaited Asian trip, the Yuns embarked on the vacation that would change their lives. A few days after their arrival, the family was just beginning to get into holiday mode when they came across a litter of Xoloitzcuintli puppies for sale. They hadn’t expected to find what they were looking for here, of all places.

The man who sold the Yuns their new puppy had said that the pup would reach around 45 lbs. The Yuns were ecstatic with their new family member and named him “Little Black.” They had no idea that this particular little pup would become a pretty big problem.

The family felt their bond with their new puppy growing by the day, and soon it was time to return home to Kunming City with their new family member. The Yuns decided that Little Black would be an inside dog. But it wasn’t long before the family began to notice something odd about him. The only foods he would eat were noodles and fruit. But, being new to dog ownership, Su Yun she didn’t think much of it and chalked it down to him being fussy.

Every day, Little Black would devour an entire box of mixed fruits and two buckets of noodles. And, even more surprisingly, he had grown a full coat of hair. Su Yun was beginning to feel like she had been lied to by the pup’s seller. But by then, it didn’t matter — the family had grown very attached to Little Black. But at two years old, he weighed 150 pounds. Then, one day, Su Yun saw Little Black doing something in the kitchen that raised all the red flags.

Su Yun walked in to see Little Black standing on his hind legs. Su had seen other dogs stand up like a human while doing tricks or begging for food, but this was different. Shortly after, Little Black constantly walked around on his hind legs. It was becoming a little frightening to be around him. But Su Yun was still in denial. But he was now definitely too big to live in the house, so the family built him a shelter outside.

You would think that Little Black would have taken to guarding the house against intruders and barking at anything that moved. But he never did. The only sound he ever made was a low growl. Something just didn’t add up. Su Yun, curious as to what dog breed Little Black really was, posted a photograph of him on a dog owner’s forum. But a vet saw it and called the authorities on her!

The vet told her that Little Black was not a dog at all — he was actually a Sun Bear! Then, he explained to her that laws in China prohibit owning a bear of any kind, and it’s an offense punishable by jail! As much as Su Yun had grown to love Little Black, she knew she couldn’t keep him. In desperation, she called the local zoo. Unfortunately, the zoo wouldn’t even consider taking Little Black in without the proper paperwork. Then, she heard a knock on the door.

The police had arrived with a wildlife expert. Su Yun tried to explain that they had bought the bear while on holiday and had no way of contacting the man who had sold him. She described the predicament she had gotten into and cooperated with the officers, trying to give them all the information they needed to find Little Black a safe new home.

“The more [Little Black] grew, the more like a bear he looked,” Su Yun explained. Then she admitted that she was “a little scared of bears.” They checked him over for any injuries or signs of malnourishment and found Little Black to be well-fed and healthy. Now, they would have to tranquilize him and transport him to the local wildlife center. But how had this happened?

Fortunately for Su Yun, she was released when police understood that this had been a simple case of mistaken identity. Sun Bears are hairless when they are cubs, so it wasn’t hard for someone to mistake a hairless bear cub for a hairless puppy! Soon after the story made headlines, people began to share their own stories about adopting domestic animals, only to find out some time later that they were another animal entirely. National Geographic stated that this is not the only case and that it happens a lot more often than you may think.

Su Yun avoided jail time, despite Sun Bears’ protected species status. And although having Little Black moved to a sanctuary nearby was the best decision for the family — and for his own sake — they still miss the pet they knew and looked after for two years. The good news is that the story has a happy ending: Little Black will continue to live out his days on the reserve and is in good hands.