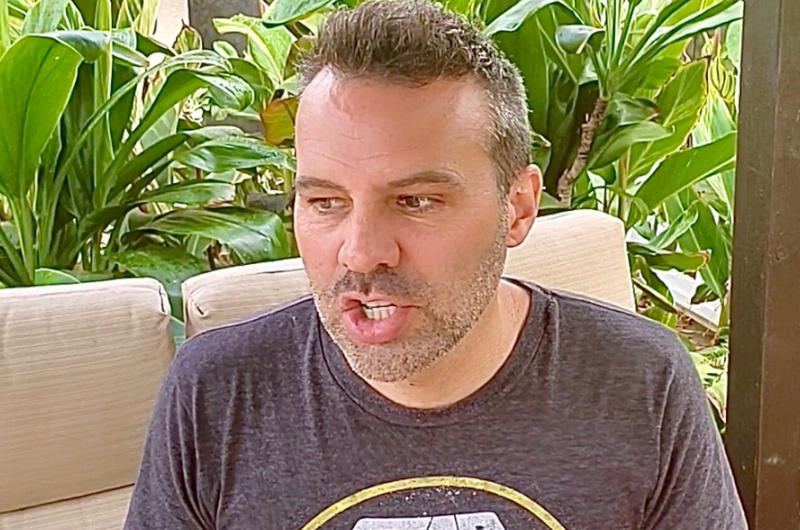 He looked out of his window and almost spat out his coffee. “Again!?” he sighed. Tim slammed down his coffee cup and got up.

The first time was already bad, it was actually pretty rude the first time around and it was affecting a lot of people. He took the plans for the renovation and decided he was going to show him how wrong he was. 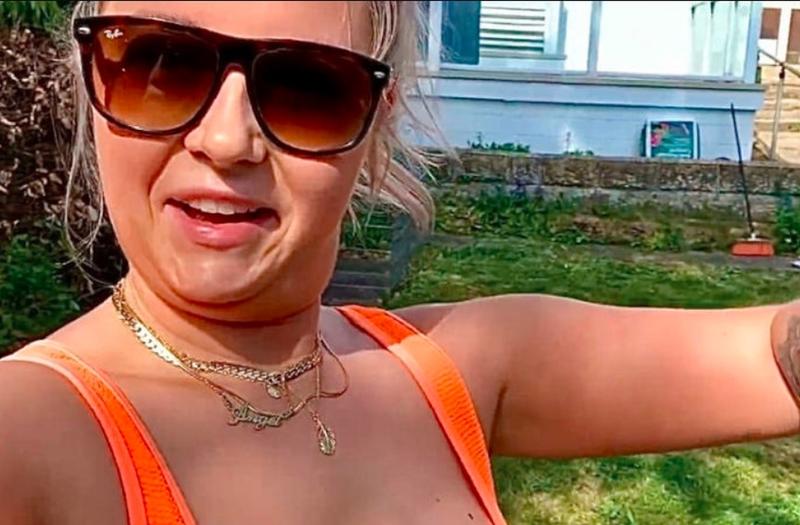 What they were building on the property was something that Tim and his wife had been wanting for a long time.

They knew work would have to be put in. But everyone had something that needed work right? They loved the woods that was by their back yard. It was a rich green forest with plenty of wildlife. But then their neighbor bought the house next door. 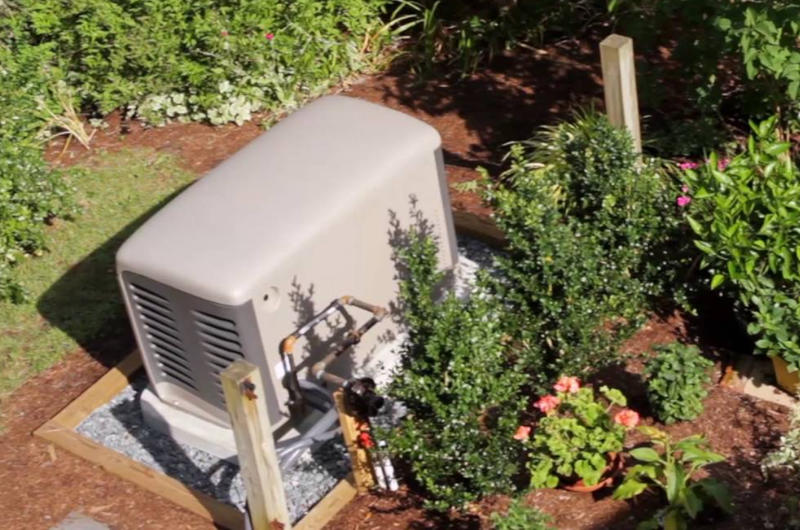 He had only just moved in and he had already made a comment about the generator Tim had. He said something about it being too loud.

Tim needed the generator for when the thunderstorms took away their power. So it was left at a stalemate. But then one day he saw the neighbor’s kids setting up sports nets in a third of his backyard without his permission.

His Kids Were Polite 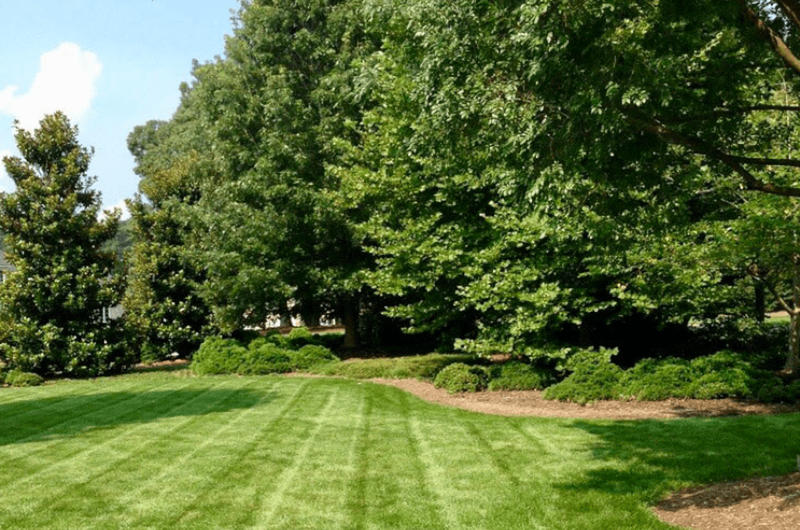 When Tim went out to investigate he was pleasantly surprised. The children said they were sorry that they didn’t ask him and were very polite.

He said that he didn’t mind if they used his yard as long as it was at the back and they didn’t damage anything. Tim didn’t understand it, the children were so nice compared to their father. 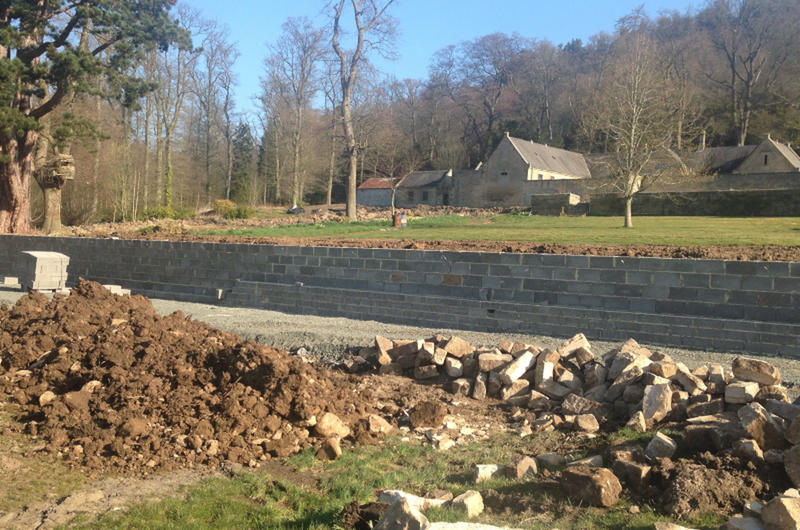 Now he felt it was necessary to start work on the backyard. He got contractors, landscapers, everything. It was time for the backyard to become something special, an oasis.

It would cost them a small fortune, but they had been saving up for a long time and had planned it forever. He was rearranging his patio a bit when he heard something strange. 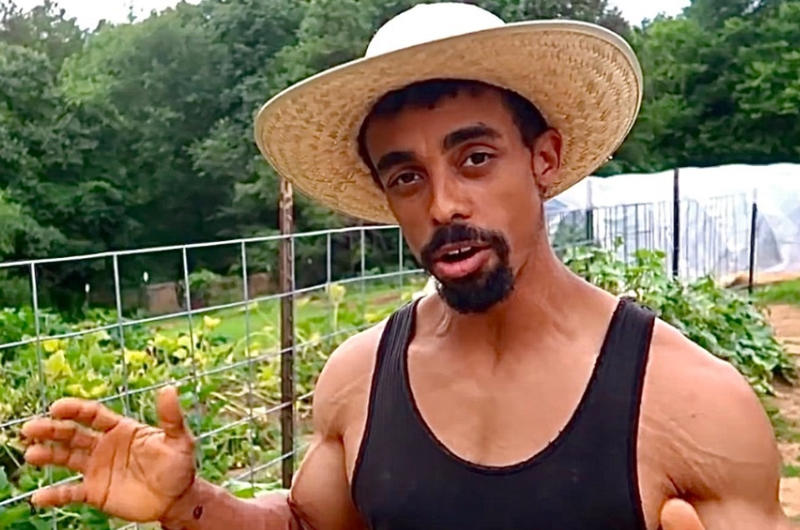 Tim peered at his backyard and saw his new neighbor, speaking with his construction crew.

He hadn’t even spoken to Tim beforehand, he just waltzed into the backyard and started barking orders like it was his backyard. He told some of the crew to be quiet since they were being “too loud.” Everyone seems displeased. 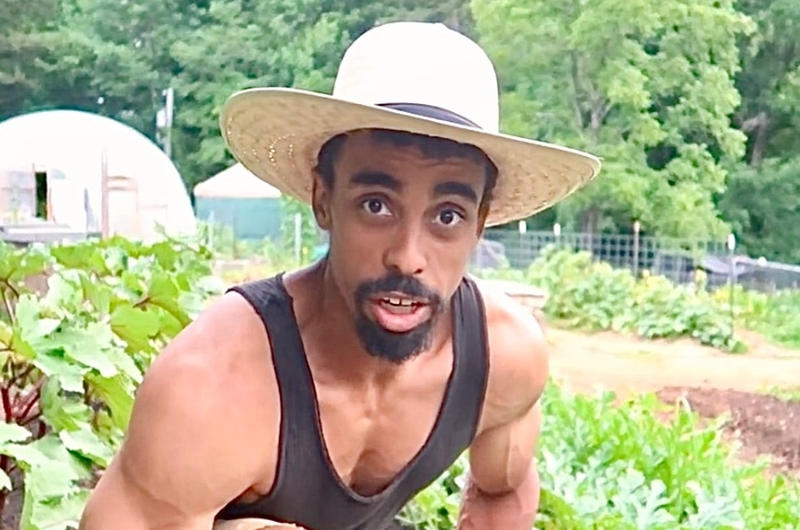 Tim couldn’t believe what he was looking at. He marched outside to see what was going on.

As he got closer he could hear a lot more of the conversation his neighbor was having with the crew. He heard: “No, you’re doing it wrong, it should be done this way.” The contractor noticed Tim and made his way towards him, looking red with rage. 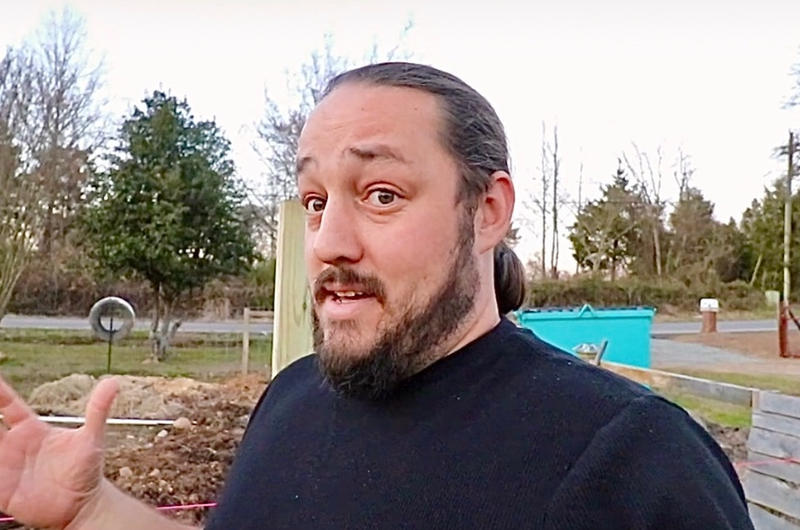 The contractor asked Tim, “This guy says you asked him to come over?” He couldn’t believe it.

Tim marched over to his neighbor to confront him. Things only escalated when his neighbor acted offended, saying that he was only doing him a favor. He told his neighbor to leave them alone before he stormed off angrily. But he would be back. The crew weren’t working today, so he felt like he could just take today to relax and enjoy the weekend. But when he peered out of the window, he could see his neighbor inspected the crew’s handiwork. Tim shook with rage.

To make matters even worse, his neighbor wasn’t just looking, he decided that he would play a more personal role. He lifted up the paving stones that were still setting in concrete to look at them before recklessly dropping them back down. 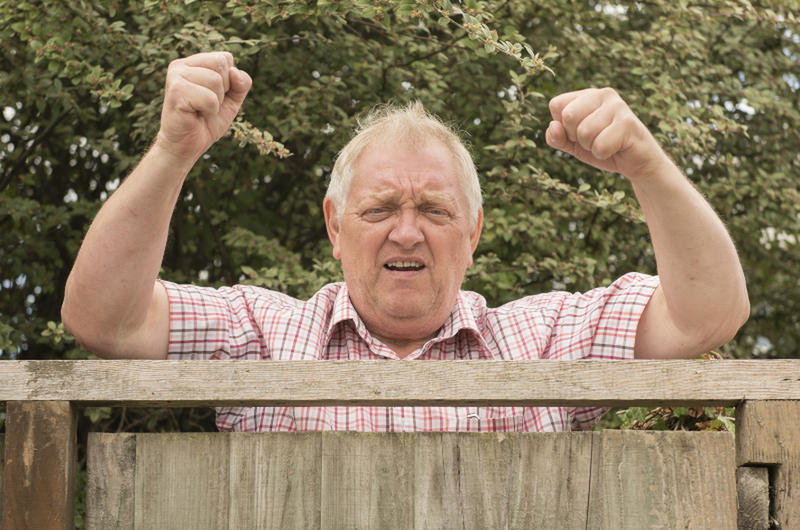 Tim marched towards the neighbor and bellowed “What are you doing?!” But before the man could even open his mouth Tim had more to say.

Using the mouth of a sailor, he told his neighbor to get off of his property and to stay away. The neighbor gave him a nasty sign and then stormed off his yard. Tim looked at the mess that he had left, he knew now it was time to do something. He called the contractor. “Hey, those trees that we were going to put in, can we move them to the back?”

When he added why, the voice on the other end eagerly agreed. He even offered to call the surveyor and set things ups. The new treeline was certainly going to have a grand effect. Not only did Tim move the trees to the back of the property, but the living wall now put a distinct and impassable border between the two lots.

The neighbor came out, screaming something about property lines. A few hours later, Tim chuckled to himself when he saw his neighbor marching up and down the new treeline with a yardstick. Then, things escalated quickly. 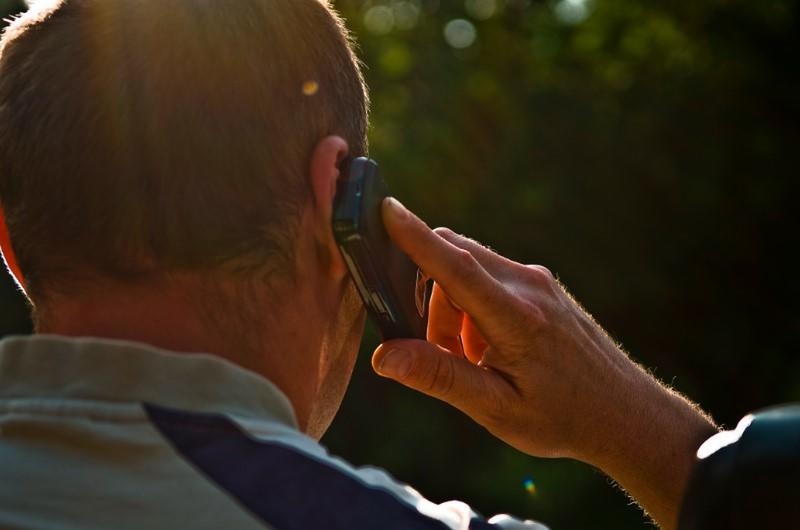 The neighbor, unhappy that he’d been blocked from the large yard that he’d grown accustomed to using at his leisure, opted to try everything in his power to spite Tim.

After a few minutes of huffing and puffing up and down his side of the divide, he shot Tim a smug look and pulled out his phone. Tim was curious about what his audacious neighbor was up to, but he didn’t have to wonder for long. The next day, the man was marching up and down the property line again.

And this time, he’d brought a city surveyor. The surveyor looked from the property blueprints to the new divide and began to measure… to Tim’s great amusement. The surveyor checked and reckecked the position of the dividing line against the plans and shook his head. Unfortunately for Tim’s neighbor, everything seemed to check out.

Tim had made sure that the living fence was well within the stipulated eight inches on his side. Trying to catch Tim on the wrong side of the law, however, only served as a shot across the bow. Now, Tim was furious. The original plan was to put a buffer between the generator and the neighbor’s property. It was an act of politeness, but since the guy had crossed a line, Tim no longer felt the need to take any extra steps for the guy’s comfort.

In fact, now he was actively going to do everything in his power to annoy him. A few days later, a storm rolled in and the generator kicked on.

Nothing To Be Done The loud echo of machinery vibrated between the two houses. Tim spotted Mr. Angry, red-faced and mouthing as he glared out his window, powerless to do anything.

Tim grinned, delighted at the storm’s timing, and went back to his computer. But as he sat listening to the satisfying sound of the generator, he had a diabolical idea. Tim rushed out, bought a timer, and affixed it to the generator. He set it to start itself weekly and run for an hour. And when Saturday morning rolled around, he sat on his porch and listened and waited, watching the clock and barely able to contain his childish glee.

And, like magic, the generator kicked on — right on time. He waited ten minutes and then he spotted his neighbor, also right on time. Mr. Angry appeared in his pajamas and robe, shaking his useless fists at the sky. “There is no storm!” he yelled over the divide and the racket, “Turn that damn thing off!”

“I’m running weekly tests,” Tim calmly retorted, “that thing has been playing up lately.” And with that, he walked away, grinning. Not only was the work nearly done and his backyard complete, but another home addition was coming. To be on the safe side, Tim installed personal security cameras on key points in his property.

There had been no retaliation, but he figured it was better safe than sorry. Who knows, the guy might have felt the need to come over and “fix” his newest electrical installation. Satisfied that he’d put his neighbor in his place once and for all, ther was just one last thing to do. Tim decided to share his story on a popular Reddit thread called “Petty Revenge,” where users post their true-life stories about getting retribution after being wronged.

He detailed his neighbor’s behavior and then shared what he’d done to take him down a peg. It wasn’t long before hundreds of hilarious comments began to pour in. “I dogsit for a family that lives in a heavily wooded area and they have a big generator too. The first time it kicked on to do its weekly thing I thought the kids next door were idling their dirtbike next to the window!” one user wrote.

“The neighbor should have been nicer, that’ll be a pain to listen to weekly for the rest of forever.” Most users were deeply satisfied with Tim’s story. “Well handled,” wrote one. And another: “I am satisfied with this revenge.” But some users pointed out that the feud between Tim and his neighbor may not be over.

Many went as far as to say that Tim’s neighbor may be a threat. Many even suggested that he purchased security cameras to gather evidence. But Tim had already installed cameras, so they offered some advice. “This is the type of situation where I would be concerned that my new trees might suddenly die off due to an angry neighbor,” someone said.

“He already knows you can see where he was standing by the pavers. Make sure the new, night-vision camera is pointed at a different angle towards the trees,” another user responded. “It doesn’t take much to poison a tree but he won’t be expecting two cameras.” In the end, Tim’s neighbor never retaliated, and probably learned his lesson. Tim ended the post with a conclusion.

“End result, neighbor furious, but powerless; I have some nice trees to look at in the backyard; and there’s nothing to stop the symphony of my generator when it kicks on every week to do a status check.”