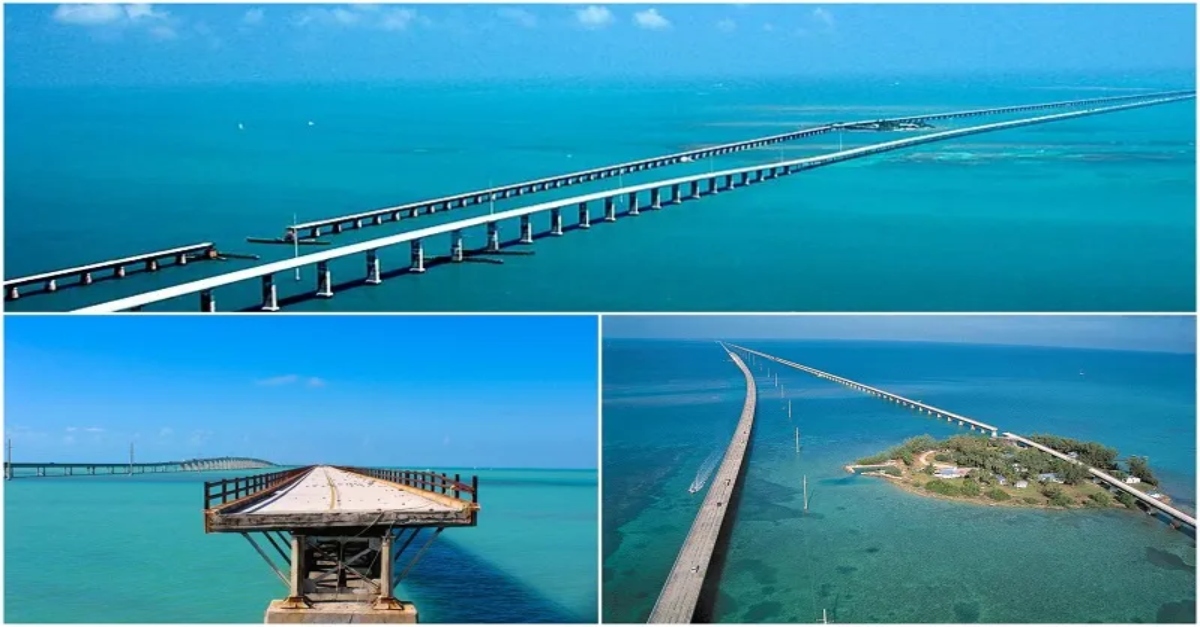 Bridges have been built for centuries to help man span gaps and distances they otherwise couldn’t or would have to spend days finding another path.

With this in mind, some bridges are very old, long before safety regulations. And some bridges may just be inherently dangerous due to their location. Here are some of the most dangerous bridges in the world.

The most famous bridge in Florida is the Seven Mile Bridge. It was the longest concrete bridge in the world briefly when it was built in 1982.

The bridge is dangerous not only due to how long the bridge is but also the fact that the region is prone to hurricanes. You wouldn’t want to be trapped on a bridge during a hurricane. 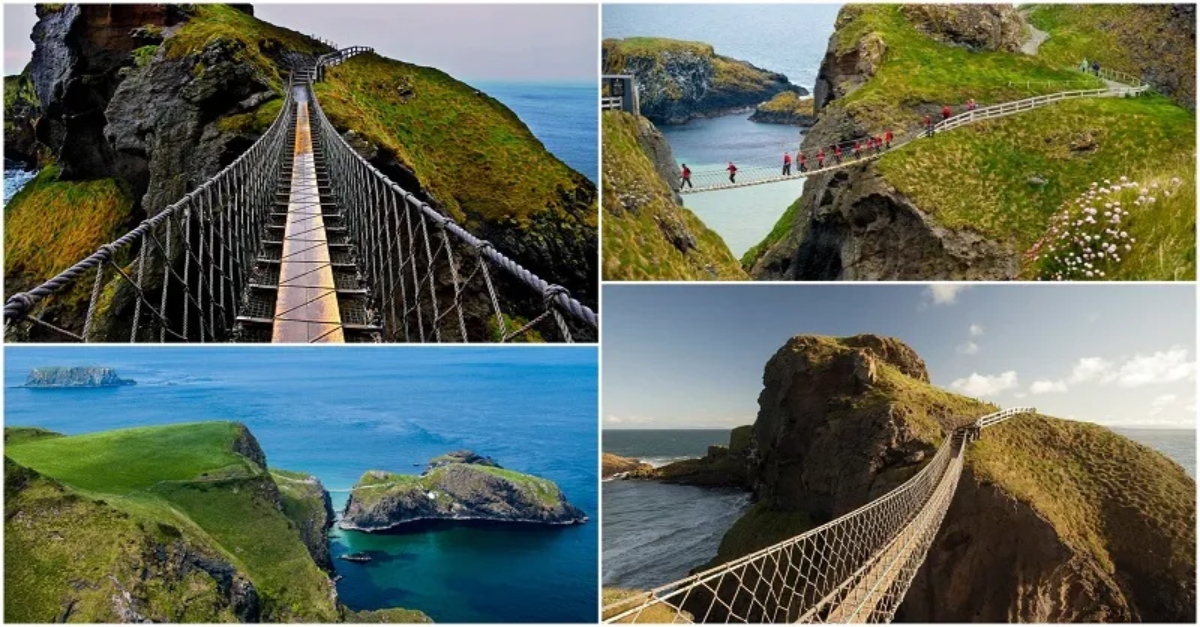 This bridge is an attraction for tourists in Ireland. The bridge’s original purpose was for fishermen to cast off salmon nets from above into the water below.

The obvious reason why the bridge is dangerous is due to the fact that it is a rope bridge. Tourists often choose to take a boat rather than brave the bridge to the beautiful island it connects to. 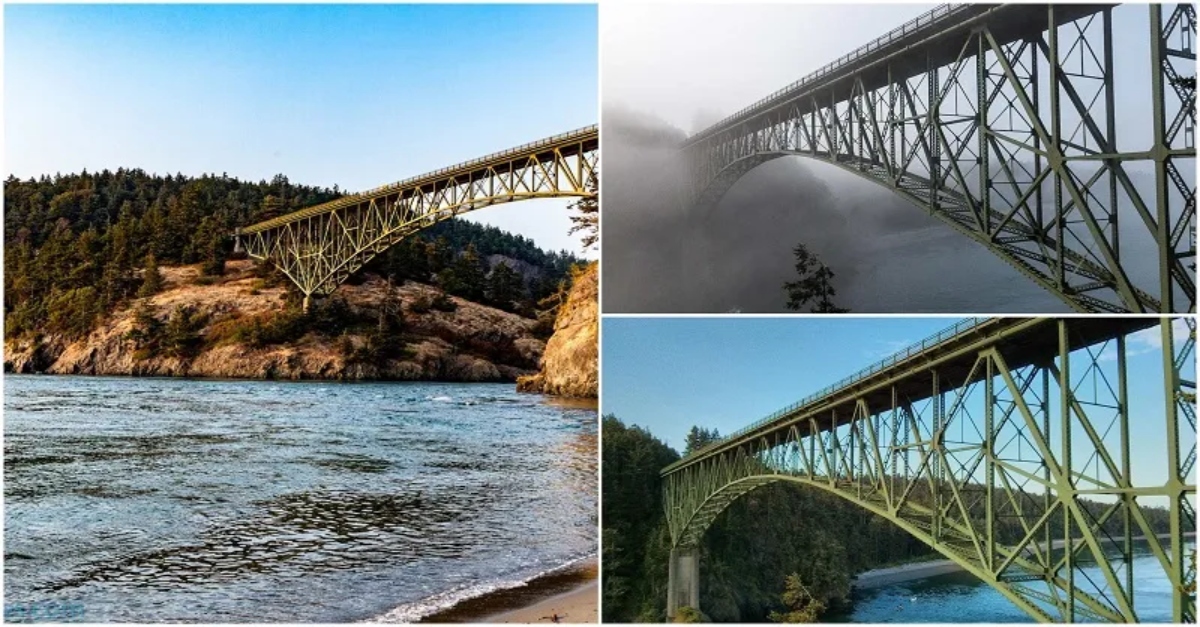 This bridge is for both vehicles and for people to walk across. The pedestrian walk can be quite scary, although it has an incredible view.

The bridge was built back in 1935 and was originally for trade and economic purposes. 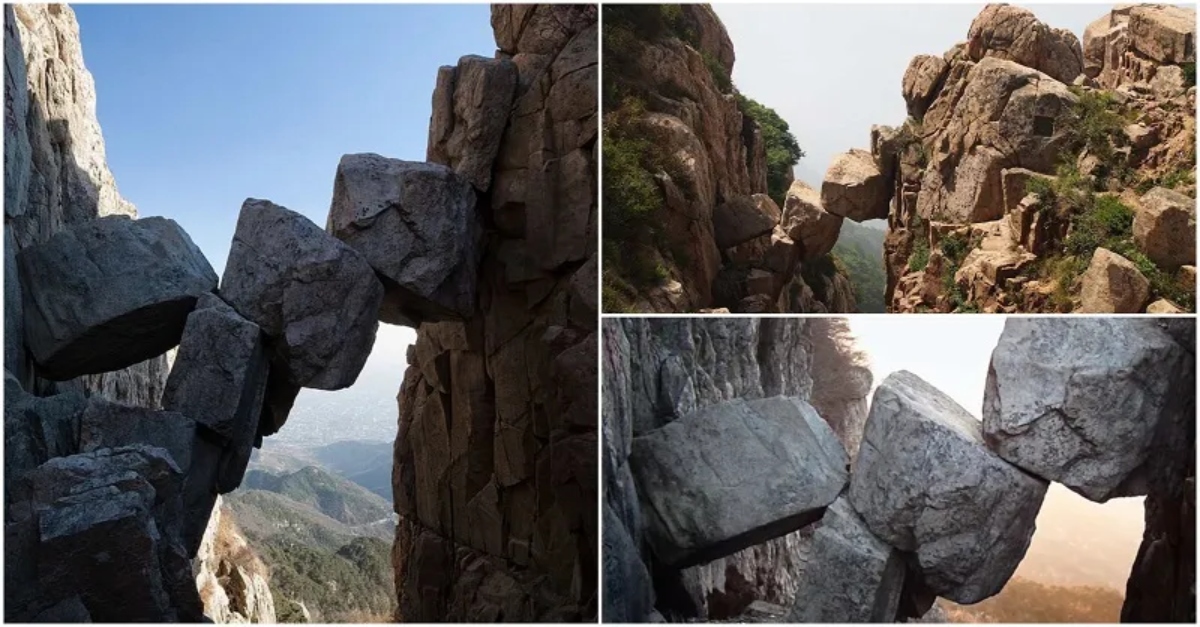 This bridge is a bit different from the others on this list. It’s a natural bridge and is one of the oldest in the world.

The bridge makes up 3 large boulders with smaller ones to add stability through compression. It is believed that the bridge is a symbol of birth. 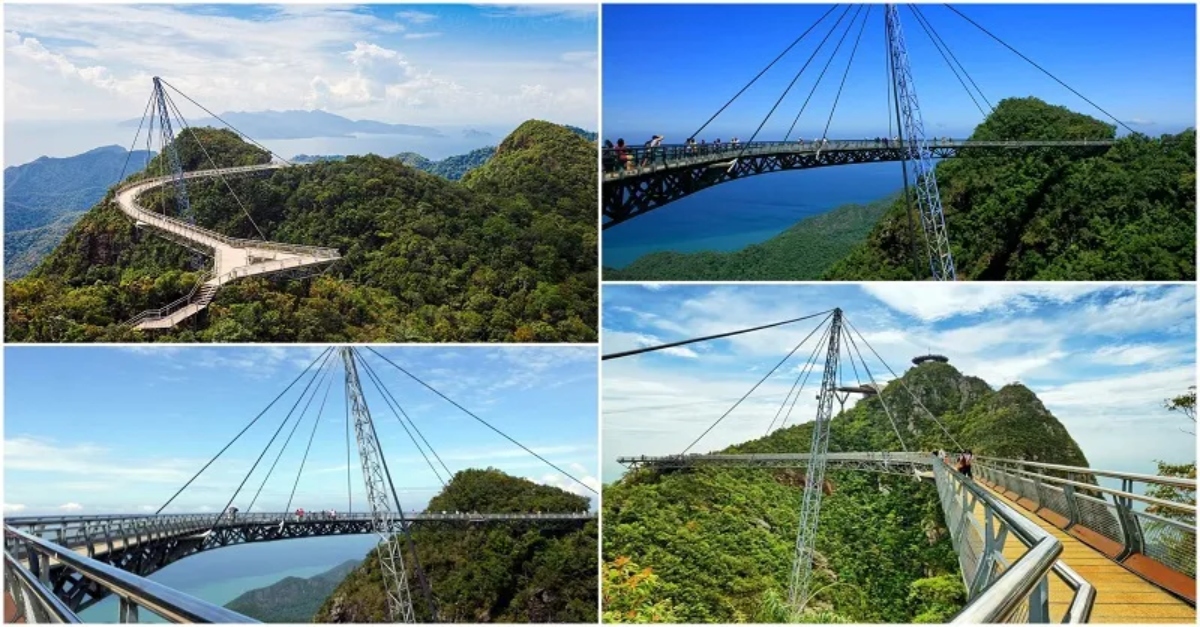 This bridge is actually relatively new compared to others on this list. It was built in 2004 and is 100 meters above the ground only held up by a single pylon.

A curved suspension bridge that’s 100 meters up can lead to a nasty fall even with the safety barriers in place. 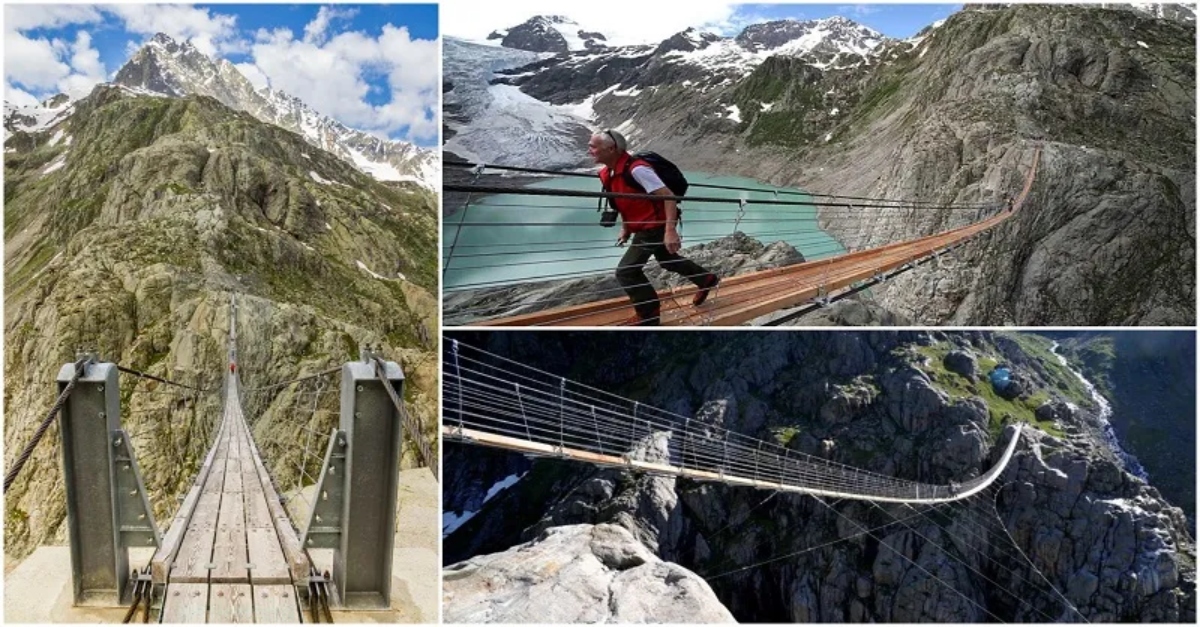 This bridge was also constructed in 2004 and is the longest bridge for pedestrians. It runs through part of the Swiss Alps.

The suspension bridge swings with the slightest breeze which can be very scary. Thankfully the bridge was improved in 2009 to address that problem. 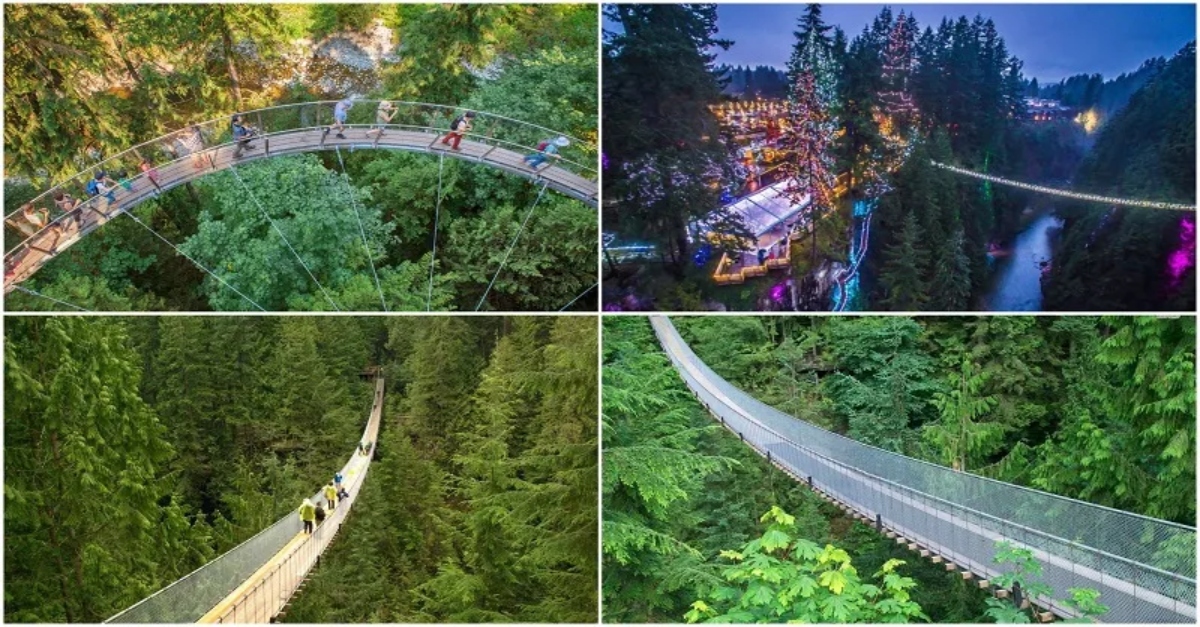 Surprise surprise, another suspension bridge. The bridge is quite outdated being built in 1889 and leads to the Treetops Adventure Park. It’s only designed for single file lines and is meant to get the adrenaline pumping.

From the bridge one can get a beautiful view of the forest floor below. The park gets more than 800,000 people per year. 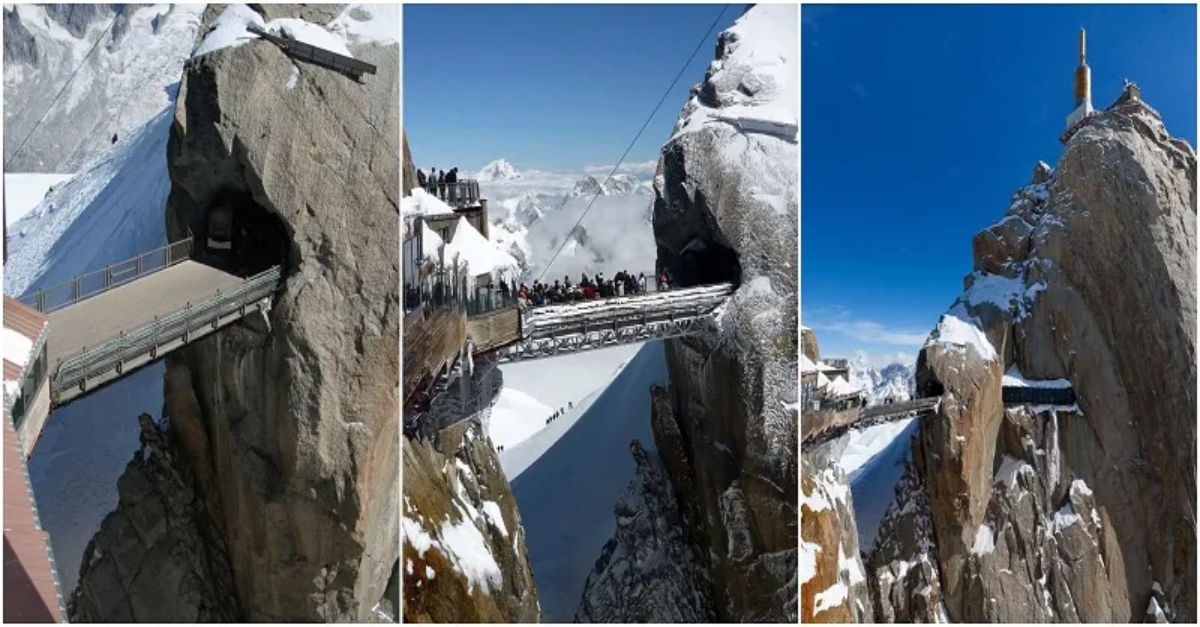 This bridge certainly isn’t very long but it sits at the massif of Mont Blanc – the highest place in Europe.

The height is made that much more prominent by the glass floor you’ll have to walk on. To even use the bridge people have to take a cable car to get up there. 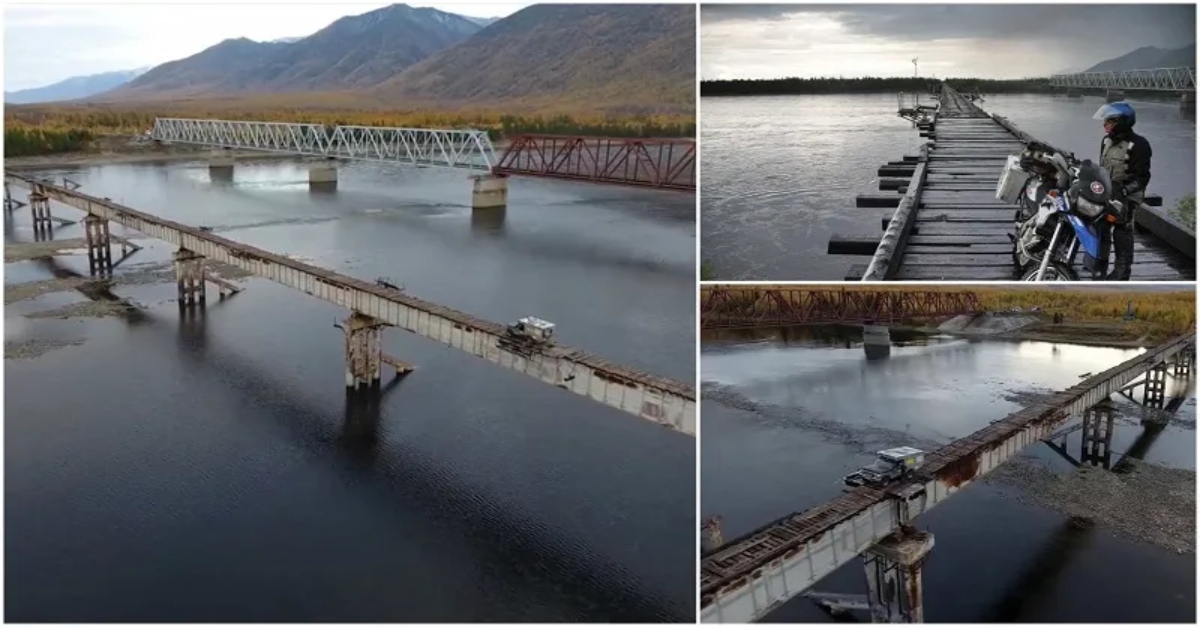 This bridge is definitely not for the faint of heart. It used to actually be a railway before it was converted into a bridge and can only barely fit one car at a time.

To make matters worse, the wood is covered in ice a lot of the time and can be very treacherous, especially with no safety rails.

10. The Old Bridge of Konitsa, Greece This bridge goes all the way back to 1871  and shows an example of old Greek architecture.

There’s a slope that’s not impressively high or long but it’s meant to look good. What’s cool is the ancient safety feature – when the wind is too strong for it to be safe to cross, a bell under the bridge will naturally ring. 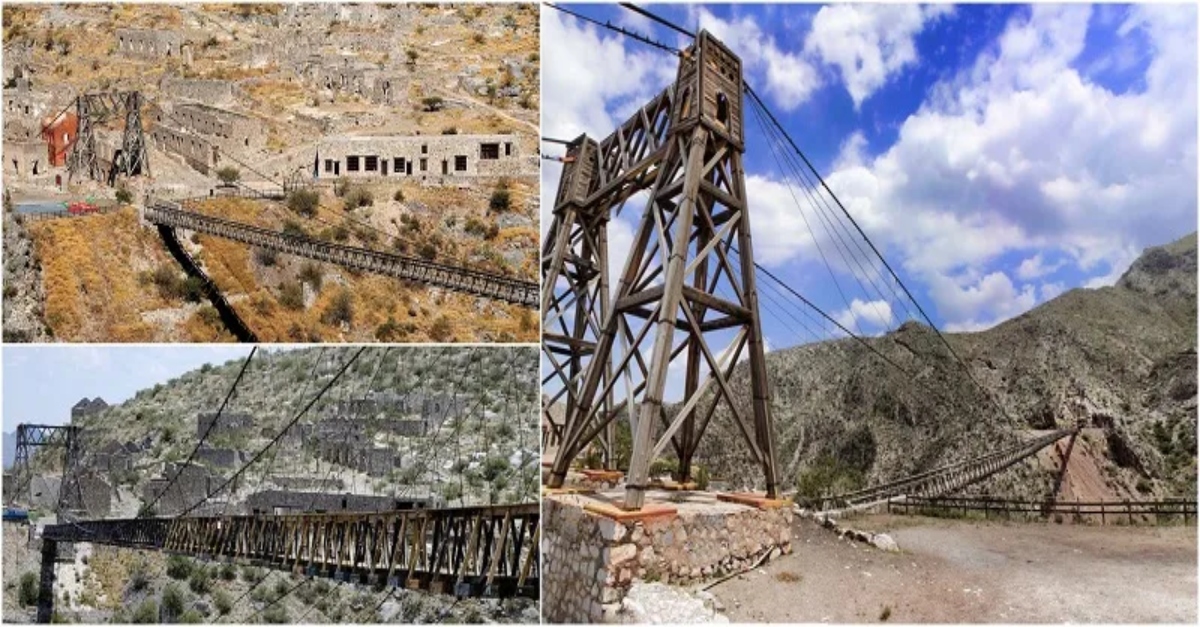 The Ojuela Bridge is more than one century old, but it only became a touristic attraction in 1991. It leads to the mining ghost town of Ojuela. Ojuela Bridge was recently reinforced with steel, but the widely separated wooden planks still make scary squeaky sounds as you walk.

Also – you might experience a little swing while crossing it. Nothing about the Hussaini Hanging Bridge looks safe. The rope is rotten, the planks have wide gaps between them and passengers will experience a lot of swinging while crossing it. As you walk on it, you can noticed what is left of a destroyed bridge on the side.

The bridge was designed as a pedestrian connection to the Upper Hunza. Once you calm your nerves, you can enjoy the nice view. 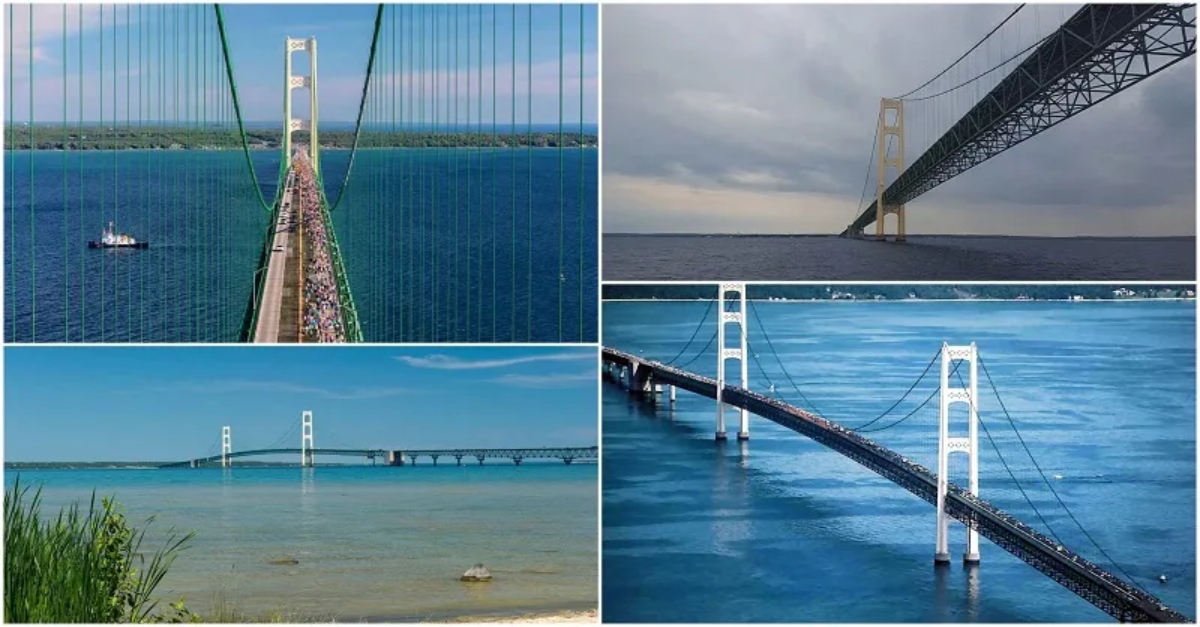 The Mackinac Bridge is a strong, majestic bridge and the fifth longest one in the world. At a first sight, nothing is unsafe about it. But suspension bridges are susceptible to any weather changes. If the wind is very strong, the bridge could move as much as 35 feet, and then back again.

Trucks were blown away on this bridge because of the wind. Mackinac Bridge is designed for both passengers and cars. The U Pain Bridge is one of the longest wooden bridges, supported by very shaky wooden posts and with no handrails. It’s as old as 2,000 years and it’s used by people on a daily basis to go the other bank of the Taungthaman Lake.

The sun setting on U Pain Bridge is spectacular. The Monkey Bridges actually look like only monkeys can cross them. They are very tight, light and shaky. In fact, these bridges were called this because you have to assume a monkey posture when you walk on them, so you don’t fall over.

For tourists, they definitely look like a challenge, but for locals this is just part of the daily routine. The Royal Gorge Bridge is one of the highest suspension bridges in the world and the highest in North America. The scariest thing about the bridge is the gorge underneath it, which is also known as the Grand Canyon of the Arkansas.

The 90 stories high dates since 1929, but it didn’t feature stabilizing wind cables up until 1982. At the time of the construction, Sidu River Bridge was the highest in the world. For those afraid of heights, the huge gorge underneath can look quite scary.

It’s less known though that Sidu River Bridge wasn’t built for transportation, so it’s not supposed to be able to carry cars. It’s simply a touristic attraction. The Hanging Bridge of Ghasa was built to ease the traffic of shepherds and their animals. The bridge is very tight and extremely shaky.

Sharing the experience of crossing this bridge with a bunch of animals can increase the thrill. The extensive use of this bridge on a daily basis left it in questionable condition. Kakum Canopy Walk is basically a very narrow wood plank, some steel bars and rope put together over the abyss.
Those brave enough to walk on it will experience some bouncing and swinging. This is enough to give you an adrenaline rush, but don’t forget to count on birds and monkeys to come into your path too.

It can be both beautiful and scary. The bridge is located on a jungle portion that is mostly for climbers. The three Iya Valley Bridges were made originally of vines alone, creating a true jungle experience for the visitors.
Later, they were reinforced with wire. But with only small wooden planks with big spaces between them, these bridges require a bit of courage to be crossed.

On top of that, there’s the swinging and bouncing. The location is secluded and very wild. It used to be a hiding place for thieves and refugees.