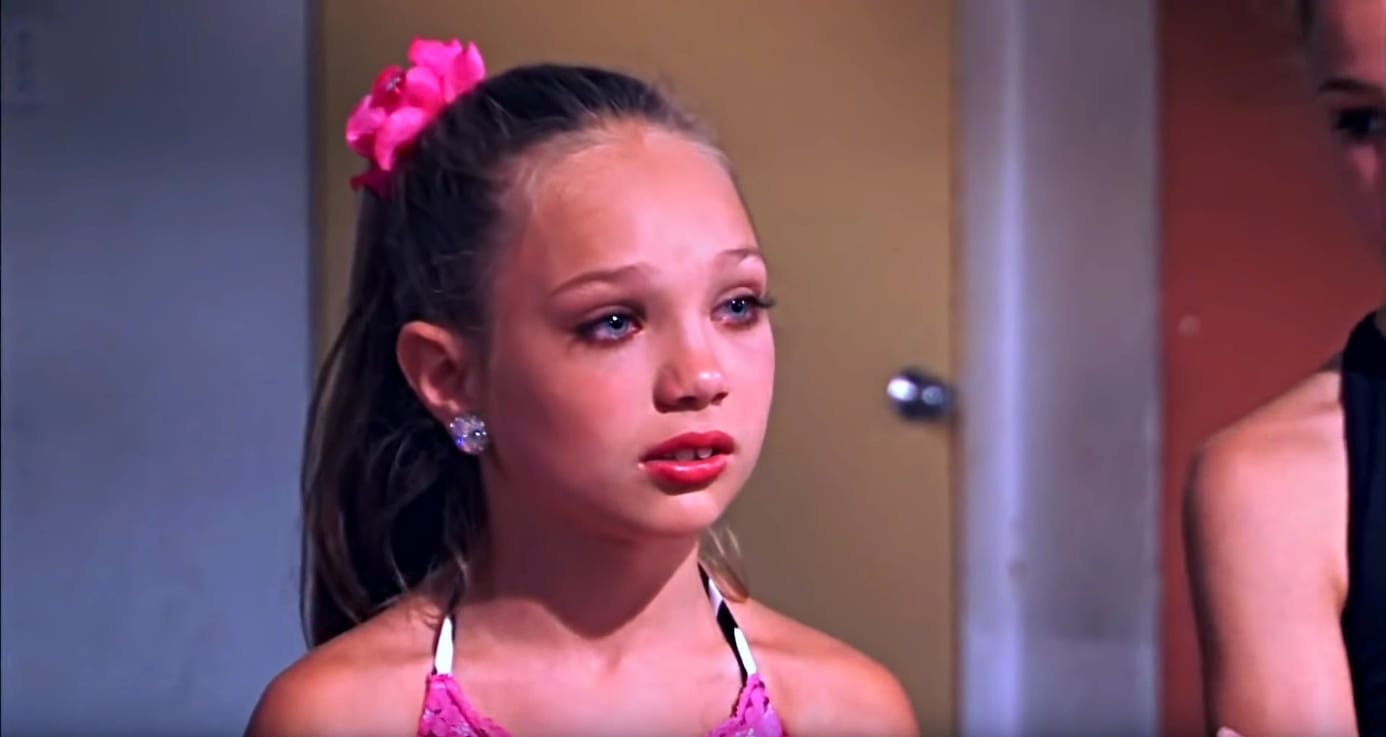 She watched her daughter finish practicing for her dance recital and her heart swelled with love. Evie walked over to where her mom was sitting. Suddenly, the girl’s face changed and she froze, mid-step.

Her mom stood up to ask what was wrong, but Evie just raised a finger and pointed out the floor-length window behind her mom, at the girl who was staring back at them.

Gina Crotts from Saratoga Springs, Utah, had thought that the hard decisions she had made in her life were long behind her. At 38 years old, she was happily married to the love of her life, Brandon. They had three beautiful children together — two sons and a daughter.

Although she was content with her new life, she always knew that an important part of her was missing. And now, she had come face to face with it. It was Kalyn.

She’d Made A Choice 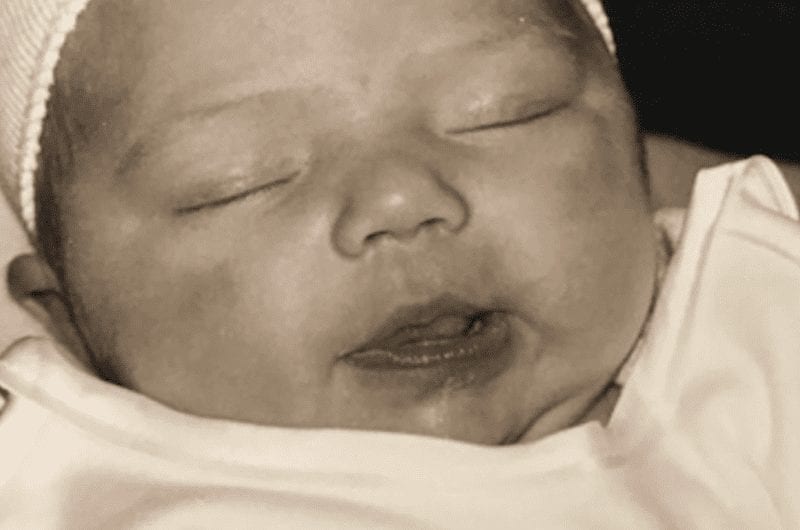 Gina had tried to reassure herself for 18 long years. She had made a choice, and she just had to live with it. But, try as she might, it was getting more and more difficult to simply push her regrets and guilt down.

That’s the thing about emotions, she thought bitterly. They can’t be silenced forever. But what would her family think when she confessed? 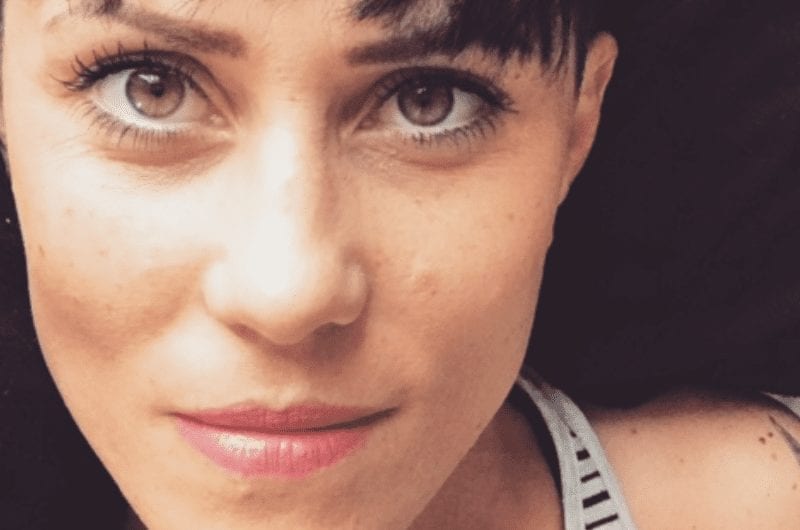 Gina remembered the moment that shattered her world as though it was only yesterday: “The double red lines on my pregnancy test kept presenting itself, in my mind, like flashing neon lights. Positive.Positive. Positive. That $6.99 plastic stick read everything about me, my past, my future, and who I would be labeled as for the rest of my life,” she wrote.

She was about to make the most difficult decision of her life. 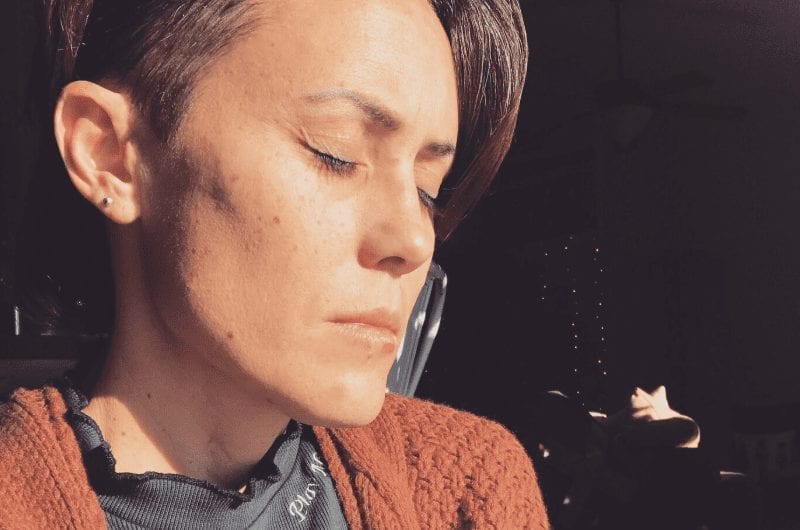 Gina was only 19 years old at the time. She was still a child herself. How could this have happened? She ran herself a hot bubble bath to soothe her nerves. She repeated her mantra again: “I’m fine. I can do this. It’s ok. I’ll be ok.”

She reflected on her youth, trying to pinpoint what had led her here. But ruminating wasn’t going to make things better. She had a choice to make, and she had to make it alone.

Deciding to carry her baby to full term and then give her up for adoption wasn’t an easy decision. Every day was a struggle… had she made the right choice?

“It was really hard… the whole pregnancy leading up to that one moment of delivery that’s supposed to be joyous, bringing life into the world… “ Gina recalls. “It was a mix of grief and happiness… but knowing what was coming after, a lot of heartache.”

“She spent a night with me and my family in my parents’ home before placing her the next day,” Gina remembers.

“Having time with her outside of the hospital helped a lot.” On the day Gina gave her daughter up, she wrote a poem for Kalyn. The poem, ‘My little butterfly,’ became a symbol of her sacrifice.

Trying To Move On

Her baby, Kalyn, was adopted by a wonderful couple — she could take solace in that. They would give her baby all the things in life that she couldn’t. After she had moved out of her parents’ house, she was struggling just to make ends meet.

But she would never forget Kalyn. During the years that followed, Gina tried to move on and worked hard to keep her mind occupied. But fate had other plans.

She met Brandon and began a whirlwind romance. Soon, they were married. And, before she knew it, she had given him three children.

Gina thought that having a daughter would finally put her mind to rest, but Evie, her middle child, served as a painful reminder of what she had given up all those years ago. And it was Evie who recognized her. 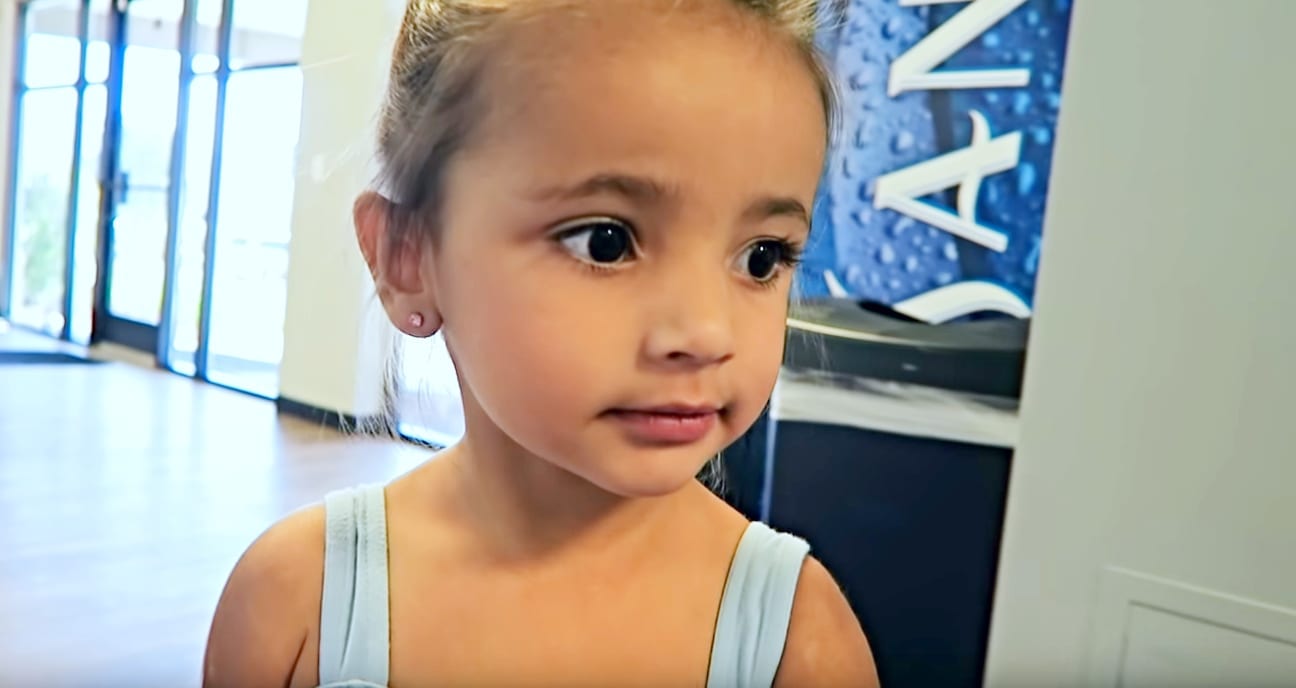 While Gina was watching Evie, now 13 years old, practice her rehearsal at her dance class, someone was watching from the window behind her.

Evie finished and rushed to her doting mother, but stopped abruptly when she saw the girl staring at her through the window. Gina turned around and couldn’t believe her eyes. 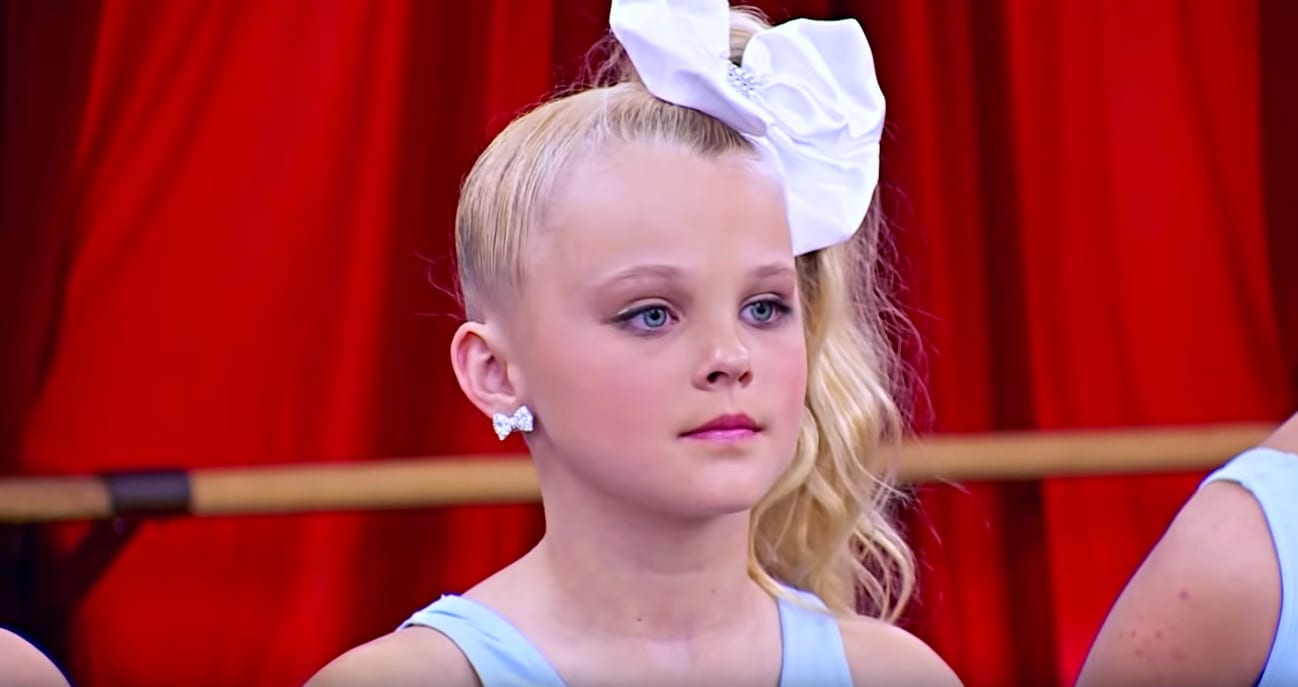 In disbelief, Gina locked eyes with the daughter she had last seen 17 years ago. Kalyn recognized her mother immediately. Surely fate had brought them together again?

Gina wrote: “I was sitting with my back to the window, I turned back and that single wall and six feet were all that was between us.” But would Kalyn want to see her? 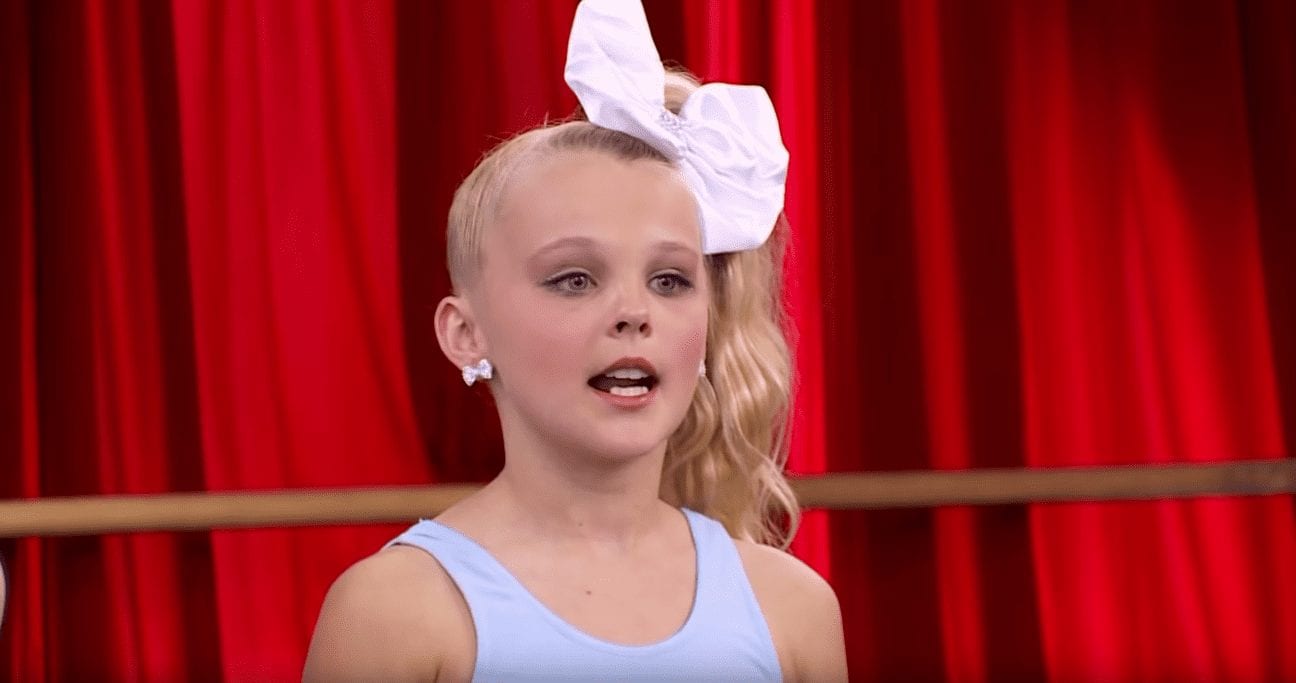 “I was shocked at first, then a second later full of sheer excitement, then hesitation in case she didn’t want to see me,” Gina wrote.

“I stopped at the door, I didn’t want to walk out and see her walking away because she wasn’t ready. Her adoptive dad gave her a choice, I didn’t want to confuse her and needed to be sure it was what she wanted.”

Fork In The Road 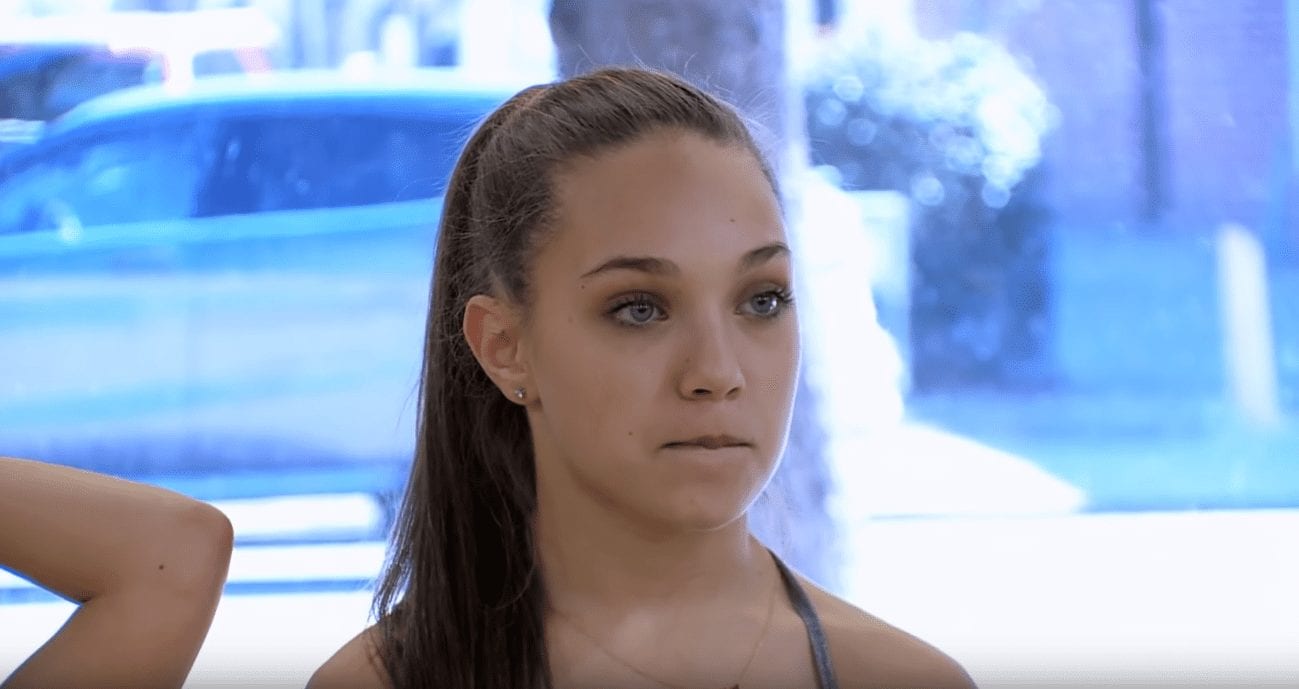 With her heart beating a mile-a-minute, Gina waited, even though the waiting was killing her. She had to know. She took a deep breath and stepped outside. Would Kalyn still be there?

“I could have run out there in a heartbeat, but I was cautious for her feelings,” she explained. “When I opened the door, she was standing in front of me.”

“The first thing I asked her was, ‘Are you happy?’ she said ‘Yes’ and we were hugging, I had to pull away because I wanted to look at her,” Gina continued.

“We couldn’t help but stare at each other, as we talked for longer, we would just look at each other and laugh. It really is wild to think about the odds and was such a great moment for me, I feel very fortunate.”

She Knew Her Sister

But how had Evie recognized her half-sister if she had never met her? Well, Kalyn’s adoptive parents had been kind enough to send Gina updates. Every year, they would send a photograph.

Gina said: “I would receive a letter and a few pictures every year, I was given quite a bit of detail on how she was doing, how her life was going and more. I got to know a little of how happy she was, her hobbies and seeing the pictures helped to settle my heart.”

Gina had never wanted to keep her children in the dark about their sister. In fact, Evie even kept a photograph of Kalyn in her room.

Gina said: “It was our decision not to surprise our children with their big secret sister and for them to know everything about her. Kalyn was a part of our lives before meeting again, she wasn’t there but it always felt like she was with us.” 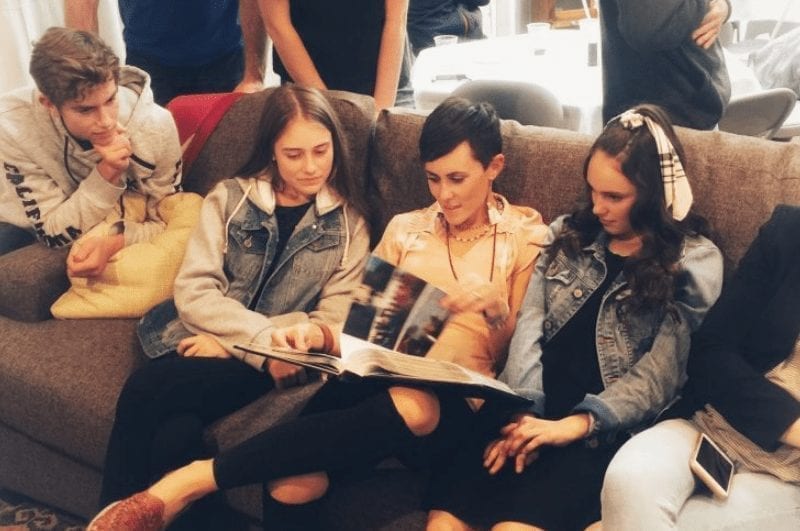 After the chance encounter at Evie’s dance class, Gina and Kalyn exchanged numbers. The pair then bonded over text messages. Gina felt like she was getting to know her daughter all over again.

“We are very fortunate it played out in this way, I’m very aware most birth moms don’t get this experience and I’m very fortunate for how my story ended up,” Gina said happily. “Placing her for adoption didn’t mean I forgot about her but pushed me to be a better person, I wanted to be someone she would be proud to meet someday. 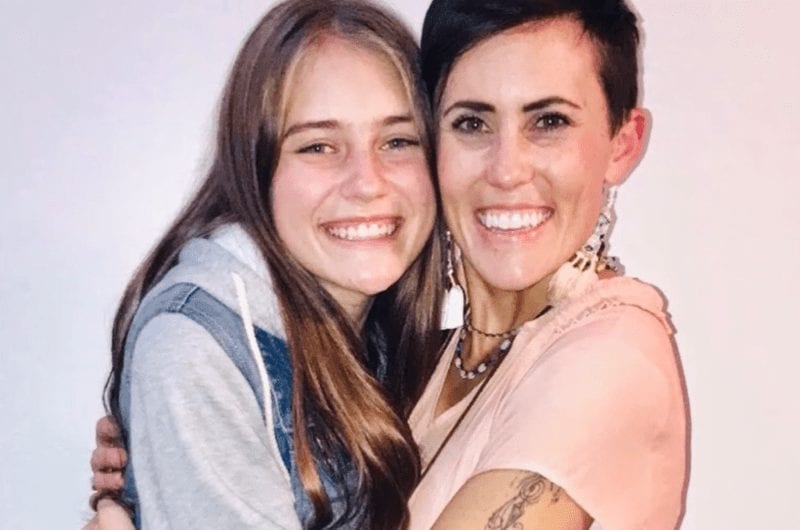 “I’m pretty overwhelmed but just excited to see where the relationship goes from here,” Gina added. But just what does her daughter, Kalyn, think?

Kalyn, a senior in high school, said: “When I first met everyone, walking into the door I felt wrapped in so much love. Here were all these people who had been loving me for 18 years, and I was just meeting them.”

Kalyn had grown up knowing about ‘Angel Gina.’ She kept a binder filled with letters from Gina and her family and even had a framed picture of her biological mom.

She had always longed to meet her — but she never imagined that it would happen like this. But what had drawn Kalyn to that dance-class window on that fateful day?

Kalyn had taken ballet classes in her younger years and had remained fascinated by ballet. Naturally, she was drawn to the window, where she could see dancers performing. She recalls wishing that the girl obstructing her view would move out the way.

Little did she know that was her biological half-sister chatting to her birth-mother, who she would meet moments later. Gina wrote a book about her incredible story, titled: “A Seemingly Unfillable Heart.”