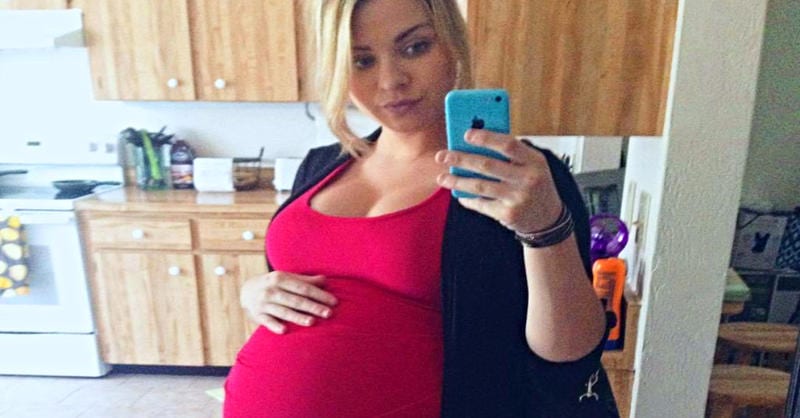 When Keely Favell was 24 she became worried when her stomach kept growing. It grew so fast that within a few months, her stomach was so big that she seemed to be pregnant. Despite taking numerous pregnancy tests, all of them came back as negative. More than once, however, her doctors dismissed her concerns. This left the mystery of her growing belly to go unsolved.

Keely loved being called “chunky” because she loved her figure and loved being curvy. She spent a lot of time at the gym and eating healthy because she was very conscious and passionate about her health. Keely made sure to take good care of her body. All of this was part of why her weight gain bothered her so much. She kept working hard at keeping her body in shape.

But it eventually reached a point where she had to find out what was happening to her body.

No matter how hard she tried, she couldn’t ignore the mystery of her weight gain. It wasn’t long before she noticed that she was only gaining weight in her stomach.

It was also becoming hard and sensitive to the touch. She hoped that it would all go away in time but it didn’t.

She rapidly increased dress sizes. Eight to be exact but she was still too scared to visit a doctor. “Having grown up with my dad as a doctor, I had become a bit of a medical coward, so seeing the GP was not my first option,” Keely said.

Without going to a doctor and her weight increasing at such a fast pace, she could only think of one explanation.

Bun In The Oven?

Her growing belly, increasing weight, growing fatigue, and her long time relationship with her boyfriend all seemed to add up to only one thing, a pregnancy.

This made them anxious as they were not trying to have a child, however, everything made it obvious that it was a distinct possibility.

This meant that she would have to face her fears and go to a doctor.

As scared as she was, she had no choice anymore. She would have to see a doctor.

The answer she received when she went, was not what she expected, however. She was told that she’s “merely being fat.” She didn’t know if there was anything she could do.

Despite the doctors dismissing it, Keely knew something was wrong. She kept ignoring it because it wasn’t affecting her life on a day-to-day basis.

But why couldn’t she be pregnant?

Fortunately, the problem would be solved once she gave birth if it was just a pregnancy. But her stomach kept growing for a full two years!

Month after month it just kept getting bigger until she passed out while she was at work. What the doctors said just made her even more furious.

After the incident, Keely immediately went to see the doctor. According to Keely, “It was a tough period in work and when I passed out my GP put it down to stress.” Without any other explanation, she simply had to continue living her life the way she did every day.

Her belly was still hard to the touch, however.

People were noticing and commenting on her growing stomach, as much as she tried to ignore it. People constantly asked her about her “pregnancy” to which she would have to explain that her doctors just said she’s overweight. “Anyone would have thought that I was nine months gone. It wasn’t the first time that I had been mistaken for an expectant mum.”

Nor would it be the last, however.

Passing Out At Work

Keely was embarrassed about her appearance. “People had seen me waddling around, carrying this lump, and I’d been asked a few times when I was due,” she said. She also had to start shopping for her clothes in the maternity section of the stores.

“I remember trying to shop for clothes in December 2016 and nothing would fit. I was skin and bone on top, then this massive lump and normal legs. The only thing that was going to fit was maternity wear.”

Keely did her best to get back to her usual routine, but when she passed out a second time, this became impossible. Her doctor offered her a different explanation this time. However, it was no more satisfactory than before. This time her fatigue was blamed on her acne medication. She had stopped taking it several months before and insisted that there was another problem. “Looking at me, anyone would have thought I was nine months gone,” said Keely.

When she finally went to another doctor and showed him her stomach, he also assumed she was pregnant and opted to do another ultrasound. This finally explained what was happening with her body.

Revealing The Truth At Last

She pointed to her stomach asking “Could it be anything to do with this?”

The doctor immediately checked for pregnancy and when it turned up negative again he suggested that they do an ultrasound.

Scared Out Of Her Wits

Keely could tell something was very wrong as she watched the doctor’s expression. “I saw her eyes widen in horror but the screen was blank. The look on her face said it all.

When she said she had to get a consultant I started to panic. Jamie did his best to reassure me but I felt paralyzed with fear.”

Keely and Jamie couldn’t have predicted what the doctor was about to tell them. They couldn’t tell what was inside her stomach as the ultrasound screen remained blank. What they could be sure of is that her life was in danger. It could be a cyst or perhaps a tumor but she would need to take a CT scan to be sure.

The only thing that was certain was that Keely was not pregnant.

The doctor let the pair know that what had been detected was no tumor. It was, however, a cyst. The cyst was 25 centimeters thick and connected to her stomach.

This explained her increasing weight but her life was in peril and action had to be taken quickly.

Within a month, Keely was sitting with a high-risk obstetrician to talk about the different options available to them. “I’ll never forget the look of shock on his face when the consultant examined me,” she said. “He said I had a large ovarian mass and the only option was surgery. He couldn’t say what I was exactly, or how big.”

No one expected to see just how big the cyst was.

“He warned me there might be more than one and they could be attached to other organs,” said Keely. It felt like she was signing away her life even though she knew that her only hope was to get surgery.

The fact that her cyst and its effect on her body was still unknown.

Time To Go Under the Knife

A month after her initial consultation it was time for Keely to be admitted for surgery. In this time her stomach had grown another five inches. As terrified as she was, she knew that if she wanted her old life back then this was the only way.

While her surgery was supposed to only take 90 minutes, hours went by as everyone waited with bated breath.

A procedure that the doctors predicted would take about one hour ended up turning into a five-hour operation. Though long, the doctors had successfully removed the cyst.

It was quite a huge one, but when they weighed it, everybody was at a loss!

The cyst turned out to weigh 60 pounds, equaling the weight of about seven babies! It was as if she carried a pregnancy of septuplets.

When she woke up, the hospital staff was all around her, showing her photos!

The Hospital Staff Acted Like She Was a Celebrity!

At first, Keely was baffled that the hospital staff was around her, but then she realized why. “I remember still being groggy from the anesthetic as they wheeled me back to the ward and excited hospital staff was shoving photos in front of me,” said Keely.

She couldn’t believe she was carrying that much weight around!

After the removal of her cyst, which accounted for one-third of her body weight, Keely began to fully realize the impact that it had on her life. “I lost sight of how difficult even simple things like driving a car or walking up stairs had become,” said Keely.

“Losing my lump gave me back my life.”

Doctors were baffled by the mere size of the cyst, proving to be a medical wonder.

When Keely woke up from her surgery, she too couldn’t believe the sight of the “medical alien” that was living inside her.

Today, Keely now has a 30-centimeter scar that runs from her sternum to her pelvis. Soon after the surgery, she was up and walking around, elated about starting her new life lump-free, even if it brought along new changes. For instance, as a result of the surgery, Keely lost her right ovary.

Nonetheless, the doctor’s informed her that she was still able to bear children if she so wished.

A Lifetime Of Stretch Marks

Even though she has never been pregnant, Keely, at 28 years old, already had stretch marks from her surgery.

No matter how bad the stretch marks, Keely knew that she would rather have them than a 60-pound lump in her stomach.

She Was So Slim!

When Keely’s family came to see her, they were surprised to see her so slim.

“The shock on my family’s faces said it all; I was literally half the woman I was going down,” she said.