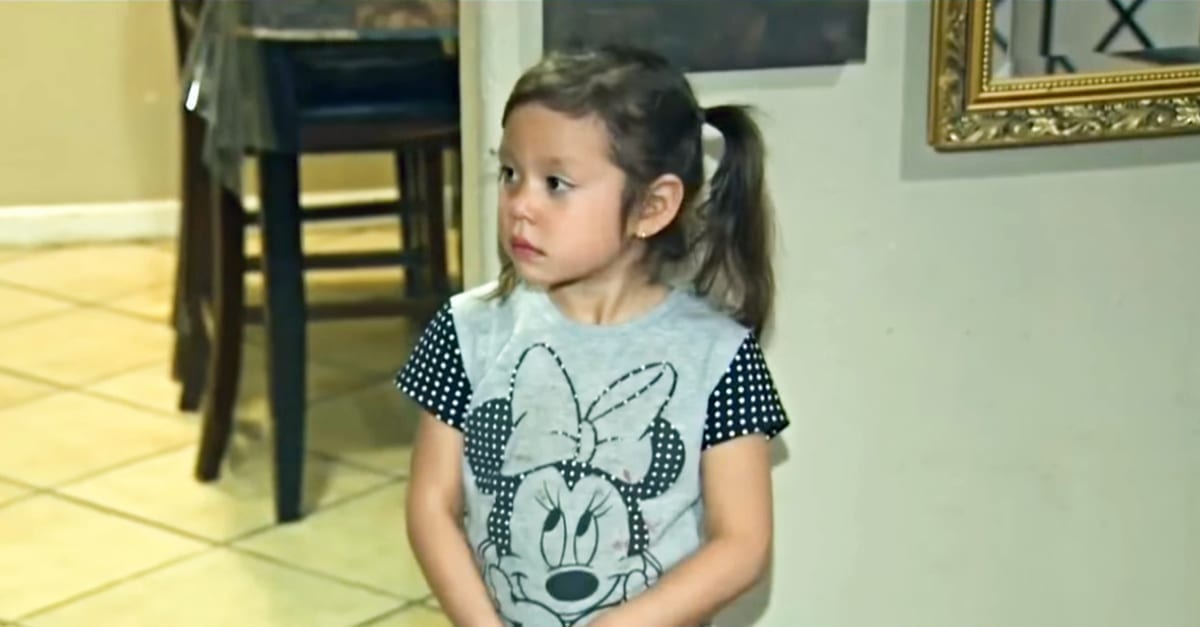 With her eyes wide and staring at the door, she tried to make herself as small as possible and prayed that he wouldn’t try to open it. She moved in front of her niece, who was crouched behind the toilet, and tried to prepare herself for the inevitable: she knew it was only a matter of time before he found them. Then, she felt a reassuring shape pressing into her leg. She had totally forgotten about what she had stowed in her pocket.

Looking For A Solution

Yesenia Barragan and her daughter, Zoyee, live in California. Yesenia is as protective as any mother and seldom left 4-year-old Zoyee alone. However, as for any other working mom, this is not always possible. When Yesenia was told that there was going to be a business meeting out of town and that she was expected to be there, her heart sank. Even worse, she couldn’t take Zoyee with. She needed a solution… and fast.

Between A Rock And A Hard Place

Yesenia weighed her options carefully. Juggling motherhood and a full-time job wasn’t easy at the best of times, but she had no choice. But on top of all the leave she had already taken when Zoyee had been sick, she knew that if she didn’t go to this business meeting it wouldn’t look good for her – her job could be on the line. She was faced with a tough decision.

Yesenia’s mom tried to calm her fears by assuring her that Savanna had looked after children before, but she just couldn’t shake the sinking feeling in her stomach. Indeed, Yesenia knew Savanna well, after all, and she was her sister. But that did nothing to soothe her worries. What she didn’t know was that this simple decision would end up changing the lives of everyone involved.

Savanna Jones had been given a big responsibility, but she had never expected the unthinkable to happen. In her eyes, her older sister had given her a chance to prove that she was grown-up enough to babysit her 4-year-old niece, Zoyee. But while they were in the family home, she found herself in a situation that few would be able to handle. Soon, she would be living a nightmare.

Marie pulled up to Yesenia’s home and dropped Savanna off, but as she pulled out the drive she had an uneasy feeling she couldn’t shake. There was a car with tinted windows parked on the opposite side of the road. She knew the neighborhood well, but suddenly she couldn’t help but worry. Nevertheless, she ignored the little voice inside her head and tried to focus. It was probably just one of the neighbors, she thought to herself. But a mother’s instincts are rarely wrong.

Meanwhile, Yesenia busied herself by showing her little sister where everything was. She gave her a list of emergency numbers, then she kissed Zoyee goodbye. But by the time her mom got that terrifying text message, everyone was already too far away to help. But it was too late to turn back now. What was done was done.

Yesenia left, but she was too distracted to notice the suspicious car. What was done was done. Safely inside, Savanna asked Zoyee to show her her toys, which she happily pulled out of the toybox in the lounge. Then, the pair cuddled up on the sofa to watch a Disney movie. Surely nothing would happen in this quiet neighborhood, located in Montclair, California?

A Knock On The Door

It was around 3:30 PM. Savanna and Zoyee were singing along to “Frozen” when they heard a knock on the door. She turned the TV off and walked into the hallway to see who it was. She didn’t expect Yesenia to come back for days, so who could be at the door? Was her sister expecting a delivery? But when she looked through the peephole, she knew something was very wrong.

There was a man at the door. He was wearing a hat and Savanna couldn’t make out his features clearly, but she instinctively knew that something just wasn’t right about him. Although she didn’t recognize him, he didn’t look like a salesman. And he definitely wasn’t an official. So, what did he want? Savanna quietly crept away from the door, hoping that if she ignored him he’d go away. But she was so wrong.

The man continued to knock on the door for a few minutes, and then the knocks stopped. Savanna let out a sigh of relief, but it was short-lived. To her horror, the doorknob began to rattle. Whoever the man was, he wanted to get in! Thankfully, the door was locked. Then, the knocking began again — this time the knocks were louder.

He Wanted To Get In

Savanna’s heart leaped into her throat. If the man wanted to get in, she knew he would. What could she do? They were trapped. Any minute now, the man was going to burst through the door. She had to think fast. She grabbed Zoyee and sprinted down the hall, to the master bedroom. But would the girls be safe there?

Looking For A Safe Place

Savanna looked around, calculating. The bedroom had a door, but where was the key? She didn’t have time to find it. Panicked and terrified, she looked for a place to hide. Then, she saw the master bathroom. Without another thought, she scooped up her niece and ran inside, slamming and locking the door behind her. Then, she heard a sound that made her blood run cold.

The man, emboldened, was not going to wait to be let in. Savanna heard the sickening sound of wood splintering as he broke down the front door. She gathered her wits and told Zoyee that they were playing a game, but she couldn’t keep her voice from trembling. She whispered that Zoyee must be as quiet as she can. They couldn’t make a sound.

Savanna could hear the man inside the house now, stomping around. Then, she heard his heavy footsteps walking through the hallway and enter the master bedroom. She told Zoyee to hide behind the toilet and she crouched in front of her, readying herself. She was going to make sure that nothing happened to her niece.

As they crouched in silence, Savanna knew that it was only a matter of time before the man found them. What could she do? Her eyes stared at the bathroom door like a frightened animal as she braced herself for the worst. But what was this? Just then, she became aware of something in her pocket, pressing into her thigh.

Savanna slid her phone out of her pocket. How could she have forgotten that she had it? Now, she could get help! But would help come in time? She frantically texted her mother with shaking fingers, but autocorrect made the first message unintelligible. After sending “I’m baby,” she tried again. “He is inside mom he’s gonna here me,” she wrote.

While she was waiting for her mom’s reply, she could hear the man walking around the house, opening doors and rifling through cupboards. When Maria finally read her daughter’s message, a chill went down her spine. But she was too far away to do anything, and emergency services would take too long. But she knew she had to do something.

Meanwhile, the girls waited in silence. They could hear the man ransacking the house, but Savanna prayed that he wouldn’t try to get into the bathroom. “I kept staring at the door and hoping he wouldn’t try to open it,” she said. Then, after what felt like hours, she got a text back from her mom.

Maria had called a neighbor, and it wasn’t long after that Savanna heard another man’s voice echoing through the house. Relief washed over her in waves as she heard the intruder, spooked, begin to scramble. He sprinted down the hall and pushed past the neighbor before disappearing out of sight. Soon after, the police arrived on the scene.

Thankfully, the man had only ransacked two rooms in the house, and everyone was grateful that he hadn’t found the girls hiding in the bathroom. Montclair police officers, including a K-9 officer, conducted an extensive search for the home invader. But, despite his scent being on just about everything, the man had escaped. Then, Maria and Savanna’s sister arrived on the scene.

Obviously, Savanna’s mom and sister were extremely proud of how she had taken control of the situation. “She was very smart and brave,” said her sister, Yesenia. “She did everything right.” But Savanna, understandably, has mixed feelings about the situation. Her main concern is that the man was never caught and is still out there.

Today, Savannah Jones is working with her family to process what happened that fateful day. She says that she is still experiencing a range of emotions. “Relief, and then knowing that he’s still out there, I don’t know, scary,” she told a local news station. She described the intruder to the police and the investigation is still ongoing.

The police in the Montclair area are still looking for him though, and are confident he won’t go back to the Jones house anytime soon. Savannah’s story is a valuable lesson for any young babysitter who is left alone in a house. Always keep your phone with you, never engage a home invader, and remain calm so that you can come up with the best way to keep you and your charges safe.