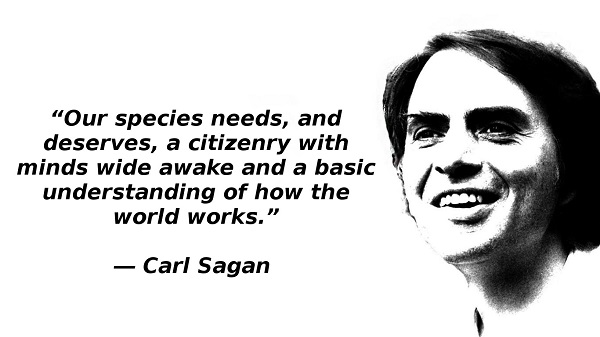 Carl Edward Sagan, an American astronomer and astrophysicist, was renowned for his writings that have helped to popularize modern-day science.  Much of his work was based on the study of astronomy and the cosmos, yet Sagan had also dabbled in many other areas, including supernatural occurrences, medical and technological advancements, and even nuclear war.  Sagan was a modern-day scientist, but what set him apart was his ability to present his discoveries, theories, and debunkings on paper in an effective way, evident in the huge collection of books credited to him.  Although Sagan’s style of writing is quite specialized, it is often difficult to identify the rhetorical structure of his works.  Perhaps the three most important and prevalent features evident in the majority of his writings include his use of his own personal experiences and knowledge as frequent examples and evidence, his inclination towards presenting scientific facts and statistics to support all of his claims and theories, and also his tendency to present topics in the form of hypothetical scenarios that the reader is able to relate to on a personal level.

The Variety of Supernatural Experience

In Carl Sagan’s enthralling essay The Variety of Supernatural Experience, he attempts to analyze how pseudoscientific thinking time after time still tends to dominate over more “reasonable” explanations, even in this day and age.  Using a variety of documented cases as his evidence and support, Sagan attempts to make a connection to today’s recent reports of extraterrestrials and the like with the same conceptual accounts of the “old gods and demons” from yesterday.

The essay starts with an anecdote that dates back to 1645, in which Sagan describes a woman who reported being “carried away” by half a dozen “little men,” to which she referred as “fairies.”  This story leads into the basic question that Sagan attempts to answer in this essay, provoking the readers by asking, “if she had grown up in a culture touting aliens … would her story have been distinguishable in any significant respect from the ones “abductees” tell?”  Sagan also refers to another event that occurred prior to 1982, in which a man described mysterious lights glowing in front of him night after night.  Since this was before alien abductions had been widely described, Sagan wonders if the “lights” in this man’s story would have included “a larger head and bigger eyes” had this taken place further in the future.

Sagan brings up the practice of superstition, mythology, and the establishment of Polytheism in his essay, all things he believes stem from the same basic factor despite the changing times and beliefs.  What becomes a key example is the comparison of the “demons,” “fairies,” and “witches” of past events to the “aliens” and “UFOs” of more contemporary experiences.  Thus Sagan’s most powerful element in arguing his belief that the vast majority of such hysterical reports are false in nature and brought on by modern pop culture is his ability to compare examples from yesterday with those of today.

Why Send Humans to Mars? 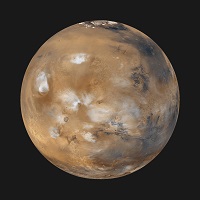 Carl Sagan analyzes both the efficaciousness and the feasibility of a world-organized manned mission to Mars in the essay Why Send Humans to Mars?  In this essay Sagan not only assesses the scientific benefits and expenditures of such a journey, but also the personal, human aspects of exploration and discovery, questioning whether it is the duty of people as a species to do everything in its power to quench that thirst for divulgence.

Sagan starts by educating the readers on the current plans for space voyage, all detailed in the SEI sequence of goals, in which a voyage to Mars has been tentatively set for 2019.  Sagan then assesses how the plan itself is practical in economic terms, bringing in the question of “where” the money will flow in from.  Through this simple question Sagan presents the first hurdle that seems quite difficult to jump.  Sagan asks, “is the ticket worth the price,” and answers with “perhaps, but only if nations pool their resources,” answering both the questions of whether or not it is worth the money and also how it would be funded if the opportunity were there.

Sagan focuses, however, on the more congenital reasons for making a voyage to the planet.  Sagan talks about similar “jumps” and advancements in human history, including deep sea voyages, atomic research, and the study of evolution.  So, he asks, is it time that space became the center of focus and study?  Sagan presents a convincing argument on behalf of exploration, stating that Mars is literally a whole new world to explore, one in which the study of the past and present of such a planet could lead to answers to questions long-since asked.  Through this Sagan makes it clear to readers that such a journey would indeed be a gamble, but even so, the potential that could be learned and gained may outweigh the costs.

Nuclear Winter is an essay by Carl Sagan which attempts to assess the environmental consequences of nuclear war and the compares the statistics of nuclear deaths to deaths caused by more prevalent factors, such as cancers caused by radiation, the AIDS virus, and starvation and pestilence in third world countries.  Instead of relying on rhetorical devices, Sagan impacts readers using an abundance of research on each of the causes of deaths across the globe and presenting the comparisons to nuclear war and the potential destruction it threatens to bring.

In trying to show how nuclear warfare would impact the world at large, Sagan presents the issue in four different ways.  He looks at the potential physical, atmospheric, ecological, and agricultural effects of nuclear war on the environment.  Sagan’s style is evident once again as he opens the essay with a flashback to the original bombing of Hiroshima and Nagasaki, when, as he states, those who orchestrated the bombings assured the world that no would be no “long-term environmental consequences” from the radioactive fallout.  Sagan flashes back to the present, when studies show that the environment is affected in a number of ways, even decades after the initial dropping of the bombs.

From the onset, Sagan makes it clear to readers where he stands on the issue of nuclear warfare.  Elsewhere in the essay Sagan talks about severe climactic outcomes, those being “nuclear winters,” and makes a direct connection to the vulnerability of even the “food on our tables” to being changed by even small environmental changes, let alone such potential large ones.  Because Sagan is able to connect such large footings with the effects of daily wonted life, he is able to make an effective argument against nuclear war.

Science and Technology in the 20th Century

In Science and Technology in the 20th Century Carl Sagan takes a look back at the developments made by mankind during the 20th Century in both scientific progress and technological sophistication.  In the essay Sagan makes an effort to effectively compare every aspect of the scientific and technological breakthroughs made from the last 100 years, in turn making his own predictions on how life will change as science and technology continue to grow in the new millennium.

Sagan pays specific attention to both the benefits and disadvantages in the way that scientific advancements have been made.  Throughout the essay he utilizes a style of presenting both upsides and downsides to each technological advancement or scientific breakthrough, showing how the growth of mankind as a society really is a double-edged sword.  Other examples of how controversy could have sprung include the innovation in ways to save, prolong, and enhance lives, and the sad fact that most of the world never see or even know about these enhancements.

Sagan also writes about the arms and space races, and the weapons that have aided in the destruction of lives in the name of war.  Here most of all Sagan challenges the idea that all improvement is for the better, and he poses the question of whether or not these enhancements have more benefited mankind or hurt the “moral fabric of society.”  Sagan makes sure to use rhetorical questions to keep the reader thinking, which effectively forces the reader to examine how the advancements formerly viewed only as beneficial could be seen as aides in doing the exact opposite, perhaps benefiting only those with the ability to wield their power.

Joseph Bradshaw of the World Socialist Organization, in response to the tragic death of Carl Sagan, wrote that as an accomplished scientist, Sagan’s greatest strength was his ability to make even “normal” people understand very complex scientific concepts through his ability to relate to his readers in his writing.  Sagan’s style is clearly marked by his need to express his own experiences, his own personal anecdotes, within his writing, bringing undeniable credibility, as well as the support of other scientific data in factual findings and statistics.  Sagan always presented an issue with a solution in mind, cleverly creating a hypothetical, scientific scenario leading to a relatable situation in which the reader, no matter who he may be, understands the proof of the point he makes, whatever that may be.