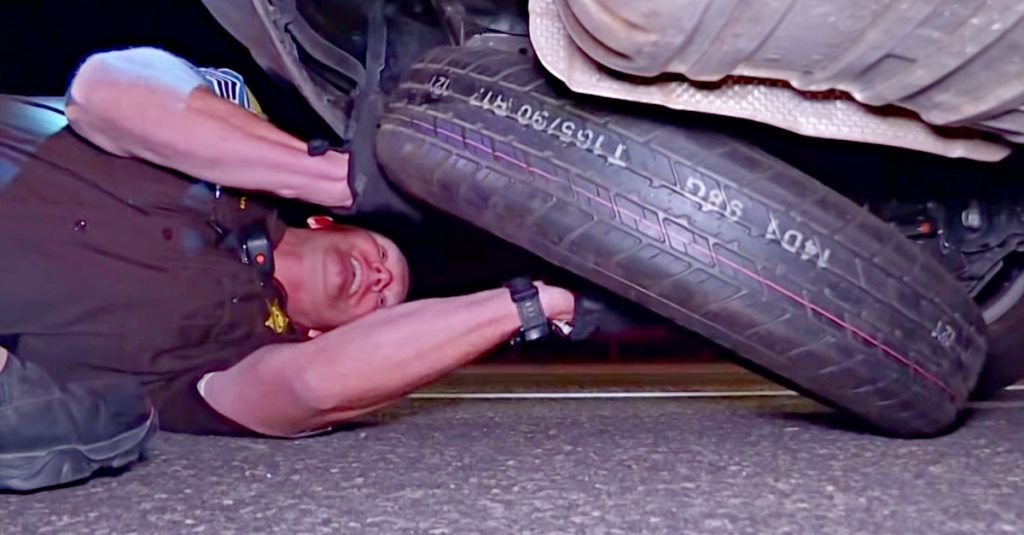 The McHenry County Sheriff’s Office in Illinois employs over 400 people, and the sheriffs who work there are described as “conservators of peace” on the department’s website. No doubt, officers come across some strange situations on the job. But one sheriff at the department was about to go home with a story that he’ll be telling for years to come.

The unnamed deputy involved in this story had just returned from a holiday. He had enjoyed his time off but was eager to get back to serving his community. But, upon arrival, he discovered that his squad car wasn’t roadworthy. Although this wasn’t a serious issue, he made a plan to take the car in for some repairs – a little annoyed that this had happened on his first day back. But this would be a trip to the mechanic unlike any other!

The unnamed deputy involved in this story had just returned from a holiday. He had enjoyed his time off, but was eager to get back to serving his community. But, upon arrival, he discovered that his squad car wasn’t roadworthy. Although this wasn’t a serious issue, he made a plan to take the car in for some repairs – a little annoyed that this had happened on his first day back. But this would be a trip to the mechanic unlike any other!

The mechanic quickly got to work on the deputy sheriff’s vehicle, but immediately noticed something very peculiar. Having worked in the industry for years, he had seen some odd things – but never anything like this. Deputy Sandra Rogers explained the specifics in an interview: “The mechanic began replacing the headlight and noticed that the wire had been chewed.” But what could have caused it?

While there are numerous reasons for frayed wiring inside a vehicle, the main suspect was a rodent. Rats and mice are notorious for causing expensive damages by getting inside a stationary car and chewing the wires. Nevertheless, the mechanic pressed on with the repair of the squad car’s headlight. But what he discovered next was even stranger. This “routine” repair was about to get a whole lot more interesting!

The mechanic delved deeper into the inner workings of the car to find out what had caused the damage to the wiring, but then he found something completely unexpected. “He started to fix the wiring when he saw a whole bunch of leaves,” Deputy Rogers explained. The mechanic, thinking that the prime suspect had been identified as a rat, followed the trail of leaves to the unsuspected source of the headlight problem.

The deputy sheriff, thinking that the car would be fixed quickly, had gone back to work. After all, a broken headlight shouldn’t cause too much trouble. But he was in for the surprise of his career. Shortly after he had left the shop, he received a call and immediately knew that something was wrong. To say that the repair hadn’t gone as planned would be an understatement.

The mechanic on the other end of the line gave no explanation, but instructed the officer to come back to the shop immediately. He couldn’t explain what he had found on the phone – he needed to show him. Intrigued and a little concerned, the officer rushed back to the shop in another police car that he’d borrowed from the department. But his confusion turned into disbelief when the mechanic showed him exactly what was in his car.

Upon arrival, the mechanic told the officer that he couldn’t believe what he had found. The sheriff didn’t know what to think and assumed the worst – that the car would require a lot more work than he had anticipated. The mechanic took him to his squad car and showed him the pile of leaves. But when he looked closer, he understood.

“Inside the nest of leaves were four baby squirrels,” Rogers recalled. The mechanic was incredulous – he’d never seen anything like this in all his years of working on cars. The officer’s eyes widened. It was clear that a mother squirrel had managed to squeeze into the wheel’s arch and had left a big surprise: four newborn squirrels – a first for this car repair shop.

The mechanic loves animals and didn’t want to damage the baby squirrels or their nest, so he carefully removed the wheel from the car and extracted the nest. He didn’t even wake the babies! “They were all in perfect condition and sleeping soundly when they were removed by the mechanics,” said Deputy Rogers. What was to be done with the babies now that they’d been found? The nest was in the officer’s car, so it was his responsibility.

“It was really cute because their eyes were still closed and they were all tucked in a circle,” shared Rogers. After the squirrels were removed from the vehicle, the deputy took them home with him. He wasn’t planning on raising the squirrels, he wanted to try and reunite them with their mother. He put the sleeping baby squirrels and their nest in a box and he put it in the exact spot that his squad car had been parked before going to the mechanic.

The deputy gently put the cardboard box on the ground and left the babies just like that with only a hot water bottle to keep them warm while he waited. He prayed that the mother squirrel was still nearby. But as the hours passed, he grew increasingly worried that he had made the wrong decision.

A long hour took forever to pass before he finally caught glimpse of a squirrel coming to investigate the box on the ground. She just couldn’t stay away from the cries of her hungry babies calling for her. She checked inside and then firmly gripped one baby by its neck and took it away with her, but she didn’t come back…

For another few hours the deputy waited patiently, he knew exactly what had happened. “I believe once she’d picked the first one up and knew the others were safe in the box, she waited until it got dark to get the rest as she must not have felt safe moving them in daylight,” he said. Sure enough, as the sun lost its hold on the world, she returned for another, and then another until they were all back where they belonged.

She Came Back For Her Babies

The officer was afraid he might have disturbed or contaminated the nest and that the mother might not return, but nature is a beautiful thing! The mother squirrel returned to the spot she had left her nest of babies, gathered them up one by one, and took them to a new home. Hopefully a safer one! But why had she hidden them in his car?

Apparently, this is a common occurrence with squirrels as they frequently make nests in cars due to the heat that they give off. One site explained, “They’re attracted by the warmth of the engine, which creates a cozy place for them to nestle. Squirrels create a fine mess once they bring in nuts, acorns, and nesting material.” But this can lead to disastrous outcomes!

How To Keep Squirrels Away From Your Vehicle

The Canadian Wildlife Federation says that this is actually a very common issue in rural areas, and they’ve suggested that people could try to decrease the occurrences by making their car a less attractive nesting spot. One tip is to leave the car hood open so that the vehicle is cooler, and other options include using taste deterrents to repel squirrels from biting wires. A bitter apple spray is a harmless option that drives squirrels away.

It is recommended that you get some advice from your mechanic and a veterinarian on what will work best at keeping squirrels away while avoiding damage to your car, and most importantly, follow the great example that the deputy at McHenry County Sheriff’s Office set…

Squirrels might be irritating at times, but the deputy at the MCSO showed a value that all police officers and all civilians should have, which is showing concern for other beings. If he hadn’t found them in time or made sure they were returned to their mom, this story could have ended very differently. These baby squirrels no doubt appreciate what this officer did for them!