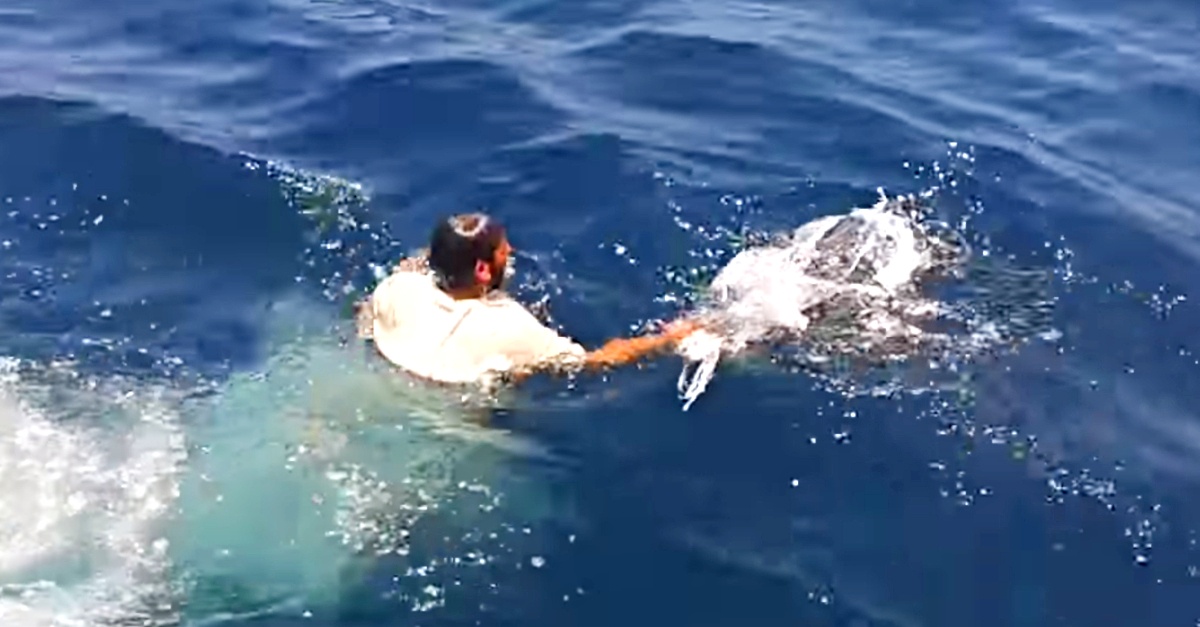 Two friends were enjoying their hobby of kayaking, loving the peace and wildness of the outdoors far away from people, traffic and work. They were just off of the coast of Gran Canaria, Spain when they saw something coming toward them.
It didn’t look like any kind of sea creature, that’s for sure. But when they noticed what was on its back and the mass trailing behind it, they knew they needed to help. 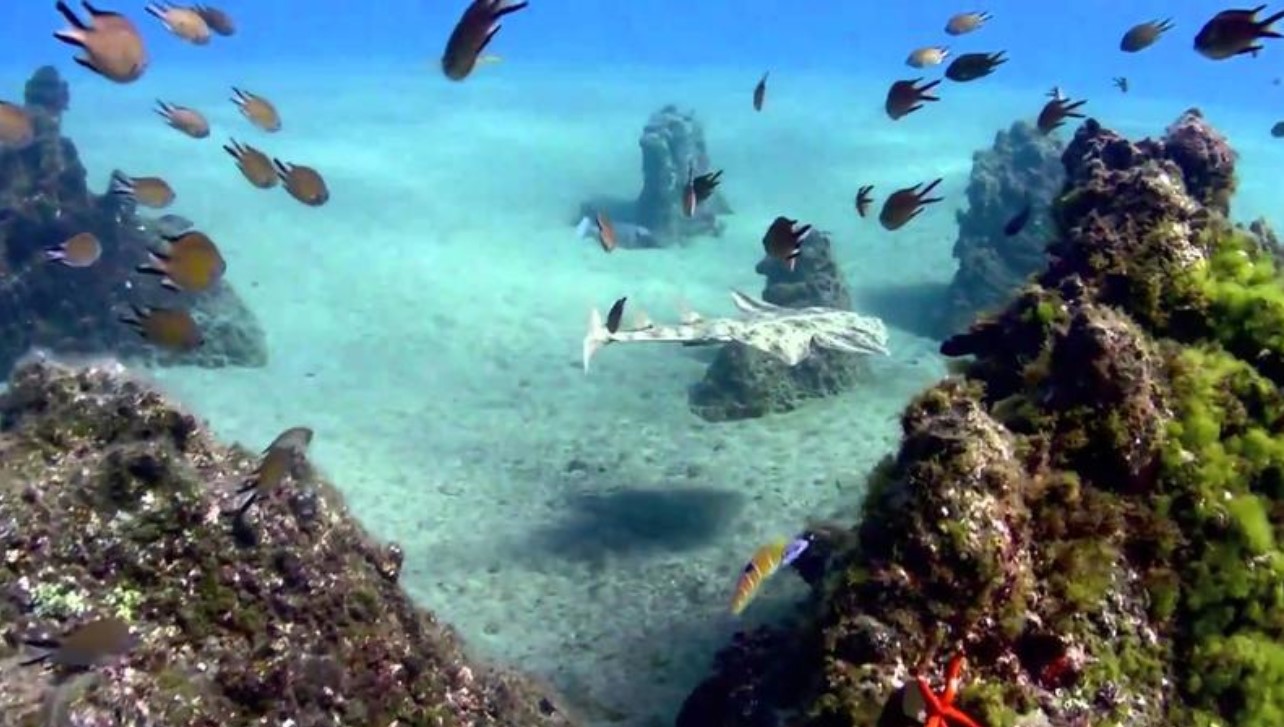 Divers and snorkelers have long known that to experience the beautify of the coral reefs and their inhabitants up close are here. The idyllic coast off Grand Canaria is home to a vast array of marine life.
The reef’s ecosystem hangs in a delicate balance, with each member of the food chain playing their part. But when the balance is disrupted, there can be devastating consequences. 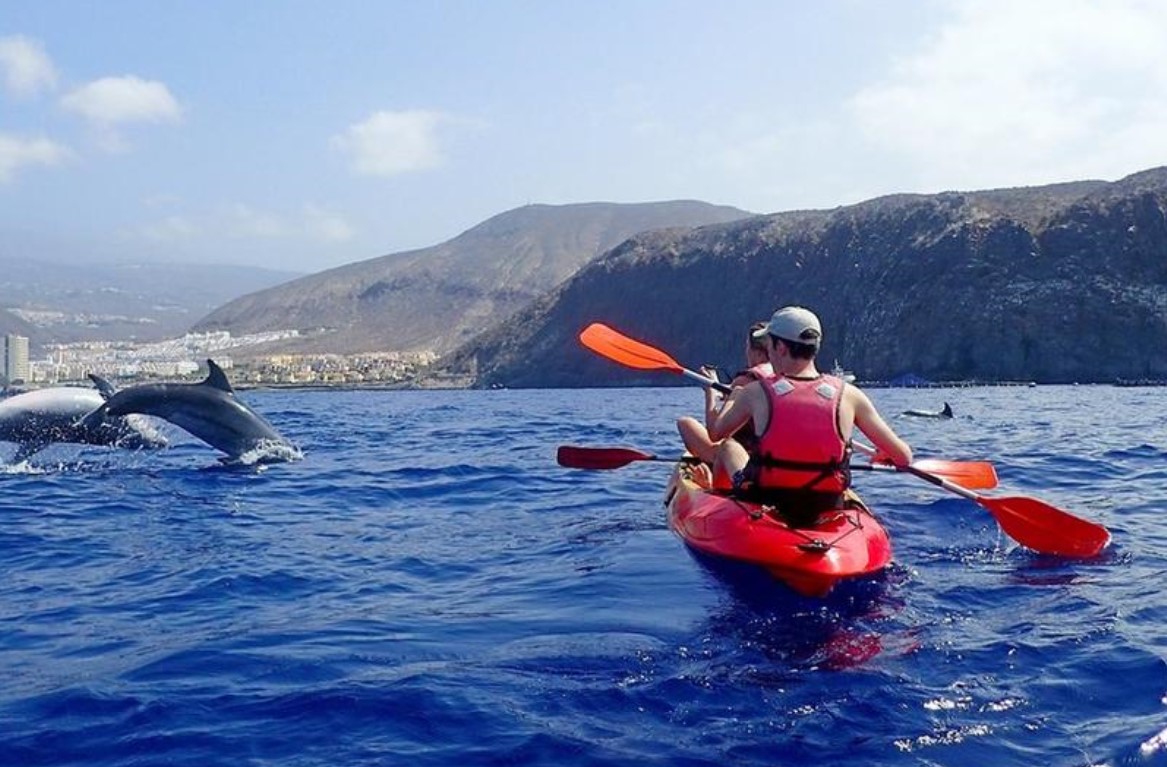 If you ever wanted to learn about this fragile and magnificent ecosystem it’s recommended to see it on your own while going on trips and snorkeling or kayaking.
Scuba diving is also extraordinary and definitely something you never will never forget for the rest of your life. This particular kayaker had a one of a kind moment when he spotted something strange in the water during his trip… Nothing quite beats this kayaker’s story that made headlines around the world – “Seal Hits Kayaker Right in the Face With Octopus.”
Especially because of the extraordinarily timed photograph, but we must admit that this couple of kayakers had a much more dangerous day in Gran Canaria, which in the end turned into a rescue mission!


Something In the Distance 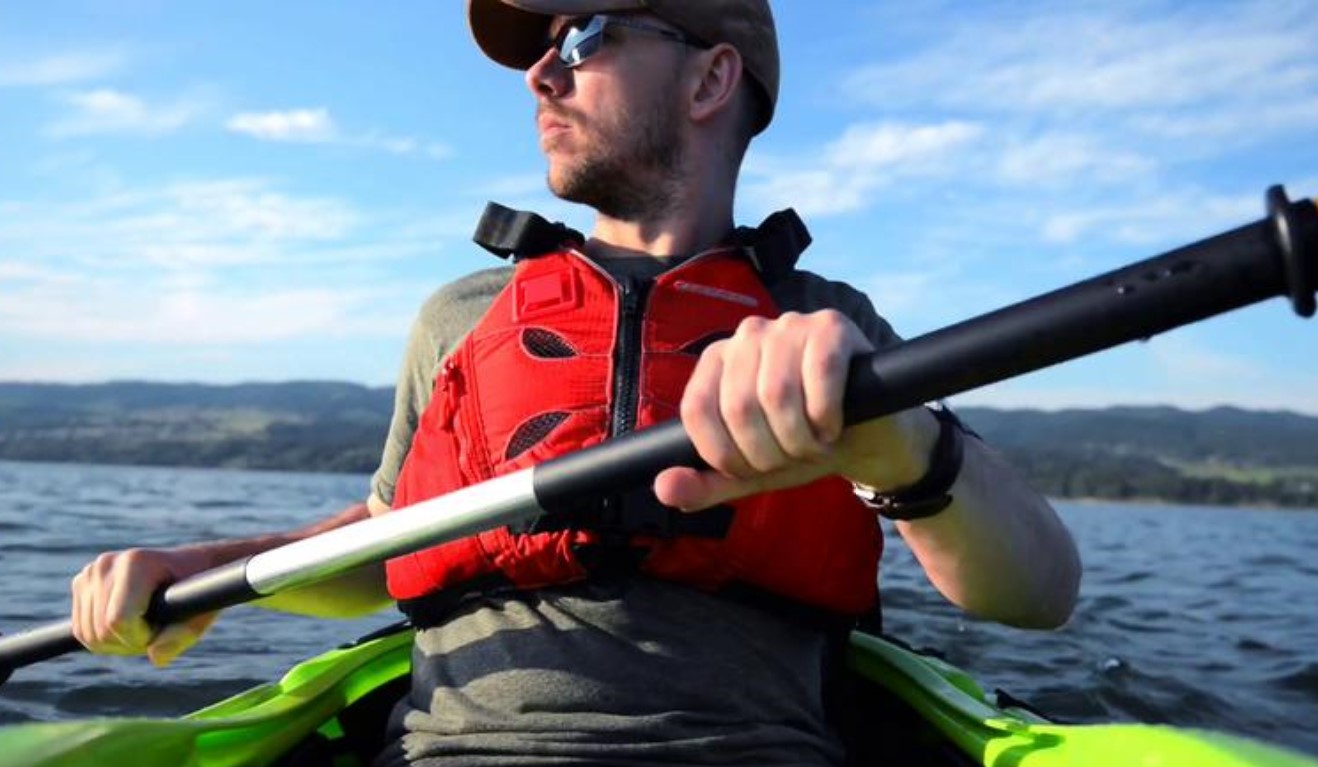 Two kayakers were having a great time while on their trip when they spotted something swimming towards them… The closer the object drew to the kayaks, the more confused the couple became.
It had too a strange color to be a dolphin, and the shape was also odd. But then, the kayakers finally realize that something was off! 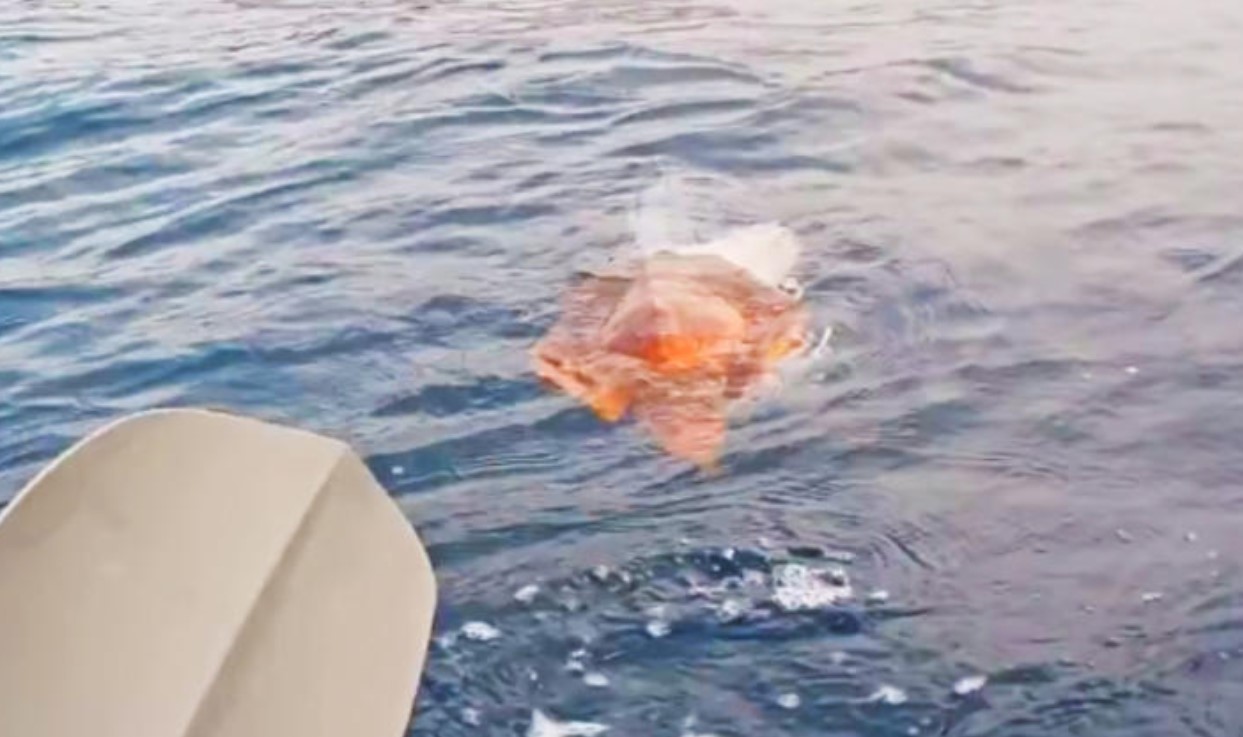 They were very familiar with the marine life in the area since they tried to get out in the water as often as possible, but this animal matched none of their descriptions.
Coming closer until it was only a few feet off, the animal was almost visible just above the turquoise water. It appeared to be reddish-brown in color. It crossed their minds that they may have discovered a new animal? The animal was bobbing closer, and it was this strange movement that alerted them to something being wrong. It wasn’t swimming as a fish or dolphin would but it also wasn’t moving like, say, a jellyfish. Everything was altogether wrong. It floated along with the tide but at the same time, it didn’t seem to want to.
In fact, the creature, whatever it was, seemed to be struggling. Then they spotted a large mass floating behind it, sparkling in the sunny waters. The bundle that was the unknown creature was taking so long to make its way to the men that they paddled a few stokes closer so as to get a better look.
What they realized would jolt them into immediate action as they realized just what they were seeing. The animal was completely obscured by the floating transparent mass. They needed to act quickly. It was a race against time in a now life or death situation. It was obvious that whatever was beneath the translucent tangled mess needed help now. Human help. Maybe that was why it was struggling so hard against the current to make its way to every sea creatures mortal enemy.
The men had come to realize that the trailing substance behind it was something they knew to be extremely dangerous, and it wasn’t at all part of the creature. They knew they had to intervene. 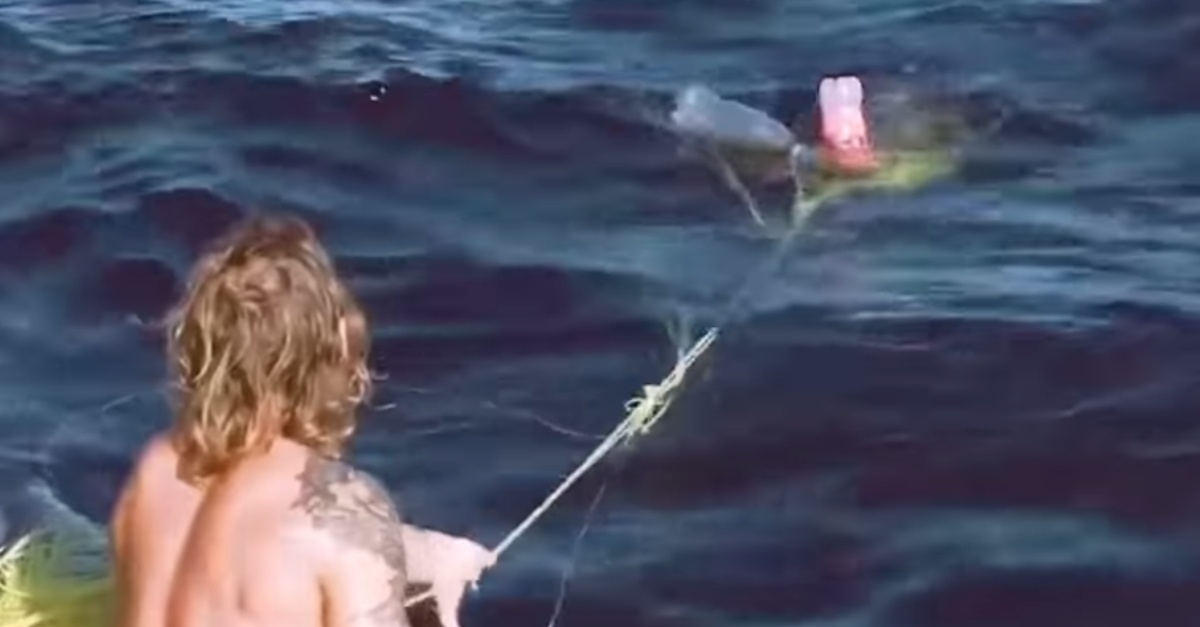 One of the oceans most graceful animals had been reduced to a bobbing, drowning and extremely desperate creature. It approached the kayaker by choice — something which is unheard of for any wild animal.
For any other creature, this could have dire consequences, but luckily these men loved nature and all its living beings. Its life would be determined by the only choice it had left. 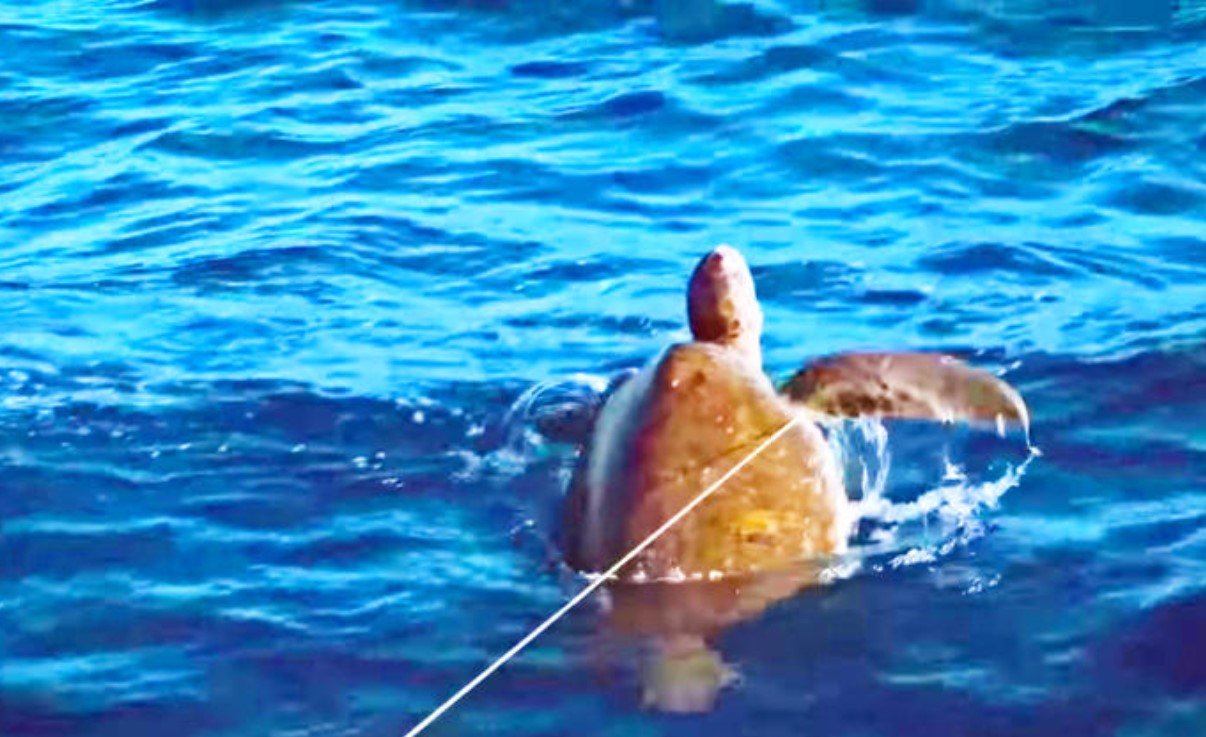 Fighting against the unforgiving ocean and everything that the sea has thrown its way, the creature gave up its fight, unable to fight any longer. In a last-ditch attempt to help one of the men leaped out of the kayak and swam the short distance to the mysterious mass.
This had now become a rescue mission. It wasn’t without danger, the man after all still didn’t know exactly what it was he was trying to save! He wrapped his hands around the creature’s smooth back and began to pull. It was bigger than he had thought and the portion that was not part of the living being pulled heavily in resistance. He treaded water furiously, just as the creature had been doing for no one knows how long. But he was determined to pull the creature back to the kayak.
He knew full well that his furious splashing was drawing attention, and who knew what other dangerous animals may be lurking close-by ready to take a bite?


Helping As A Team The other kayaker had now gotten into a position where he could scoop the creature out of the water and only hoped he wouldn’t get bitten whilst trying to help.
They finally had a chance to look a what the mysterious animal was, and when he realized what he was holding his heart went out to the poor creature that had been struggling along for so long. This is definitely a moment he’ll tell his grandkids as a bedtime story! Nearly losing his grip on the slippery creature he saw immediately what the problem was. It was heavy but very hard and smooth. As soon as he had a firm grip he hoisted the animal into the boat and it stopped wriggling.
They both knew exactly what it was now. Hidden in a disguise of plastic bags, shredded, tangled and wrapped around it, but it was undeniable. The exhausted mysterious animal was a rather tired sea turtle. There was still a huge problem looming. You see, the kayaker had to struggle for a while because his rescue mission was far from being over.
After he had spent a moment or two assessing just how to disentangle the suddenly still creature from its bonds the rescuer did something unexpected. Somehow the turtle knew it needed help that no one else could give it and that it had come to the right place.
The only people that could save it now from a watery grave, the men got to work while the turtle lay still. There are many dangers in the sea, but sea turtles actually have very few natural predators once they have reached a decent size. It’s mostly only sharks and killer whales that can take on the hard shell of a sea turtle.
Still, there is one predator that has started preying on these graceful and endangered creatures.


The Most Common Waste The turtle had the misfortune of swimming through a net of plastic. That was the strange mass that had been trailing behind it and hindering it.
The mass of plastic weighed it down and entangled its head and legs. It made swimming nearly impossible and forced the turtle to come to one of the greatest enemies of all – people. One Kayaker pulled out a knife that he luckily had on him and began the delicate process of untangling the plastic from around the animal.
It was only a few single strands that had tethered around its neck and under its arms. But off of those few pieces hung heavy huge clumps trailing meters behind the animal. Freeing the turtle didn’t take too long and the unnamed man smiled while he helped. After inspecting the turtle a few times and turning it this way and that, he was satisfied that he had gotten every last scrap and nothing was embedded in any folds of skin, the kayaker gave the cooperative turtle a kiss on the head before lowering it back into the ocean. News of the rescue made its rounds on the internet and many users expressed and shared gratitude and praise.
A reader wrote: “God bless that angel. I’m sure if that sea turtle could talk, he would have kissed him right back and thanked him for his kindness.” The Weather Channel shared the incredible video of the kayakers rescuing the poor turtle on its Facebook page. Since then, it has garnered more than 13 million views.
And the video served as yet another warning to humans to be more careful about where they leave their trash. It also signals a much larger problem in society.


When It All Began The production of plastic took off in the 1950s and was hailed as an inexpensive and convenient alternative for packaging and storage. Since then, estimates put the amount we’ve produced at around 9.2 billion tons. Unfortunately, a staggering 6.9 billion tons of all plastic produced has become waste.
Scientists were horrified to discover that between 5.3 million and 14 million tonnes make its way into our oceans each year. Even more troubling news is that it’s unclear just how long it will take for the plastic waste to completely biodegrade. Scientists estimate a range from 450 years to, possibly, never.
Nearly 700 species, including endangered ones, are known to have been affected by ocean plastic. Some are entangled in abandoned fishing nets or discarded six-pack rings, but many more are harmed by ingesting microplastics – pieces of plastic smaller than one-fifth of an inch across.

Are you ready to make just a few small adjustments to your everyday life to reduce the amount of plastic waste in the oceans? Take a reusable bag with you to the grocery store.
It’s estimated that the US alone accounts for 100 billion disposable plastic bags each year. By reusing your shopping bag, this amount could decrease significantly! Another painless way to reduce plastic waste is to skip straws. Americans throw away 500 million plastic single-use straws every day. That amounts to about 1.5 per person.
Buy stainless steel reusable straws or paper straws – the environment will thank you for it! Lastly, avoid products that contain microbeads and search for natural alternatives. These microbeads make their way into the ocean and get ingested by virtually all marine animals. Sea turtles are becoming increasingly at risk of endangerment and are less frequently seen in their natural habitat as a result of pollution. Plastic bags and waste items are often mistaken by the age-old ocean inhabitants, jellyfish, their staple food.
So, if you would untangle a turtle in the ocean then let’s stop putting plastic there too. Reduce, Reuse, Recycle!
Must Read
Genome Studies Manage To Find A New Branch Of Fungal Evolution
European Space Agency Budget Increases By 10 Billion For The Next 3 Years
Artemis 1 Finally Launches: What It Means For Space Travel And Exploration