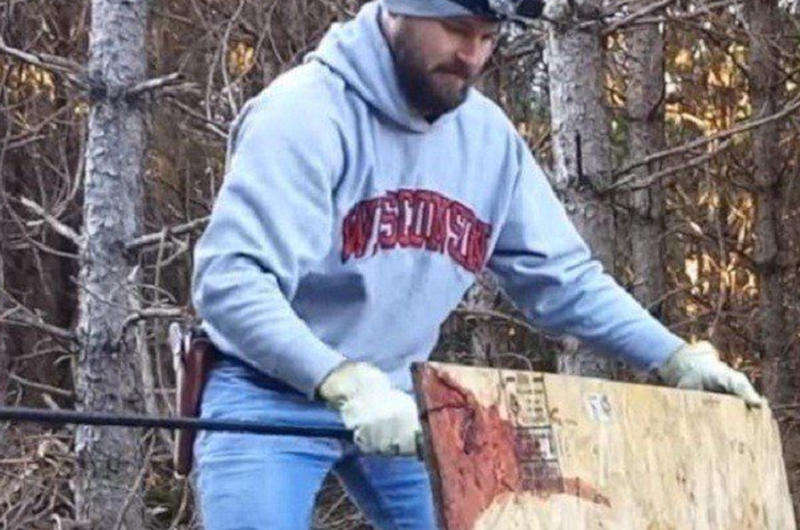 He knew that this wasn’t the smartest move but he did it anyway. But he didn’t have a choice on the matter, he knew there was only one thing he could do.

If the decision was to either be cruel or be stupid, he knew which he would choose every time. He decided to walk a little closer.

John Oens was quite familiar to the wilderness of Wisconsin.

He was an avid hunter and wasn’t afraid to tell people about his controversial hobby. He also did a kind of public service when hunting bigger animals that people didn’t know about.

He hunted animals like foxes and coyotes. This helped out local farmers who had to look after their livestock from predators.

He used humane traps that would hold the animals and let him release them away from the farms. He’d also use a gun if the animals were more dangerous but had no idea that he would thank himself for being so prepared.

John, his friend, and his father all followed the obscure trails to get to their favorite place. He smelt the fresh pine in the air and grinned.

They wanted to get a few fliers under their belts before heading back home. They also wanted to check on the traps that they had laid down earlier. This wouldn’t just matter to them, but the entire community.

Coyotes with rabies had been spotted in the area and were extremely dangerous. So when they heard movement nearby, they readied their guns and stayed on high alert.

He moved the brush aside with the barrel of his gun and looked down at something big and furry caught in one of his traps. But it was no coyote, it was a wolf.

He hadn’t caught any old wolf, but a Timber Wolf – an endangered animal that would be a felony to harm.

It noticed John and made eye contact. It growled at him ferociously. He wondered if it had rabies like the coyotes in the area.

They didn’t want to get too close to the ferocious animal. They slowly got closer, decided on what to do.

Animal control would never get there soon enough and they couldn’t abandon the animal in the trap. He still wasn’t sure if it was mad or not. He then whispered, “Dad? Can you get the board from the truck?”

His father ran down back to their truck while John resisted the urge to get closer to the majestic animal.

He was so excited, he loved wolves and had never gotten so close to one. He examined the wolf and made two observations.

“What’s the board for?” John just looked at him and smiled. He had a plan up his sleeve.

“I need a shield.” Either this would work out and be an incredible tale to tell, or he would win a prestigious Darwin Awards. But he knew he’d have to get it out of the trap.

Getting To The Trap

All of them agreed it showed no signs of disease. The only danger was its massive jaws and sharp teeth. John held the board between him and the enraged Timber Wolf and slowly crept forward.

All he needed to do was get close enough to pull at the trap release. The wolf reared back and flexed its hindquarters.

His dad held his gun ready – a last and worst-case scenario solution. John knew he couldn’t leave it there. His friend held the camera with shaking hands and filmed everything.

Animal control wouldn’t get there in time and by then it could hurt itself, bleed out, or gnaw its paw off. He was so close. John reached out as fast as he could.

He felt the hard slam against the board … then nothing. John dared to peek over the make-shift shield. All he saw was a rush of brown and black through the forest.

And, just before disappearing out of sight, something amazing happened. It would be something they would remember forever.

A rustle of movement came from beside them as the rest of the pack sprinted through the woods to join their brother. John and his group turned pale.

They had been there the entire time?! They had been in far more danger than they had realized. Still, they were in one piece and no shots had been fired. Also, the event ended with two memorable moments.

An older female jaunted up and licked the freed wolf’s face. It must have been the young canine’s mother?

The pack was reunited. Many thought people like John – hunters – didn’t appreciate nature, but it was the exact opposite for him. This was truly a beautiful moment.

Memory Of A Lifetime

Just before leaving, the wolf paused and turned around. Its eyes locked with John’s again.

The family rushed off into the thick of the woods. For a moment, it felt like the beautiful, wild animal was thanking him for taking the chance and setting it free.