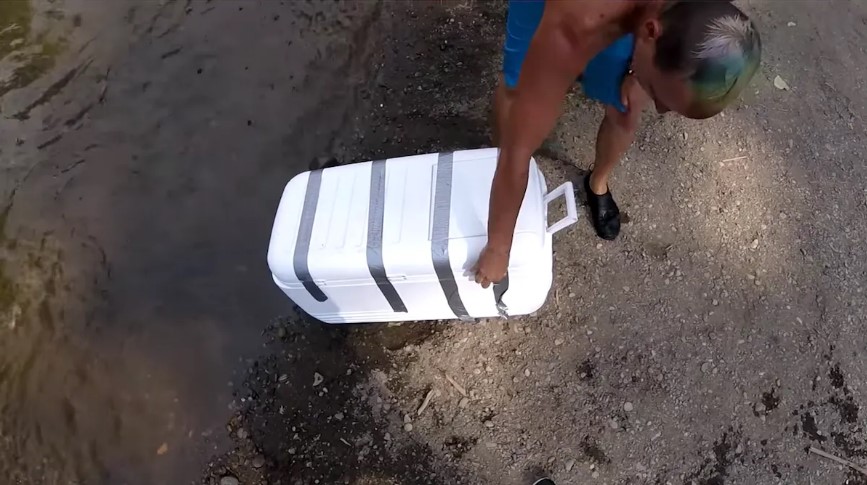 It’s not every day that you find an interesting object floating down a body of water. But some things are better left alone.

Relieved that the mysterious container wasn’t too heavy, he dragged it along the river bank. Its weight put his mind at ease–a body would be heavier. But his relief was short-lived. As he dragged the cooler onto the shore, people anxiously started to gather round. He peeled off the tape that was sealing it and his mind raced.

Finally, the hatch was open and he could look inside. And his discovery haunted him forever.

Secrets In The River 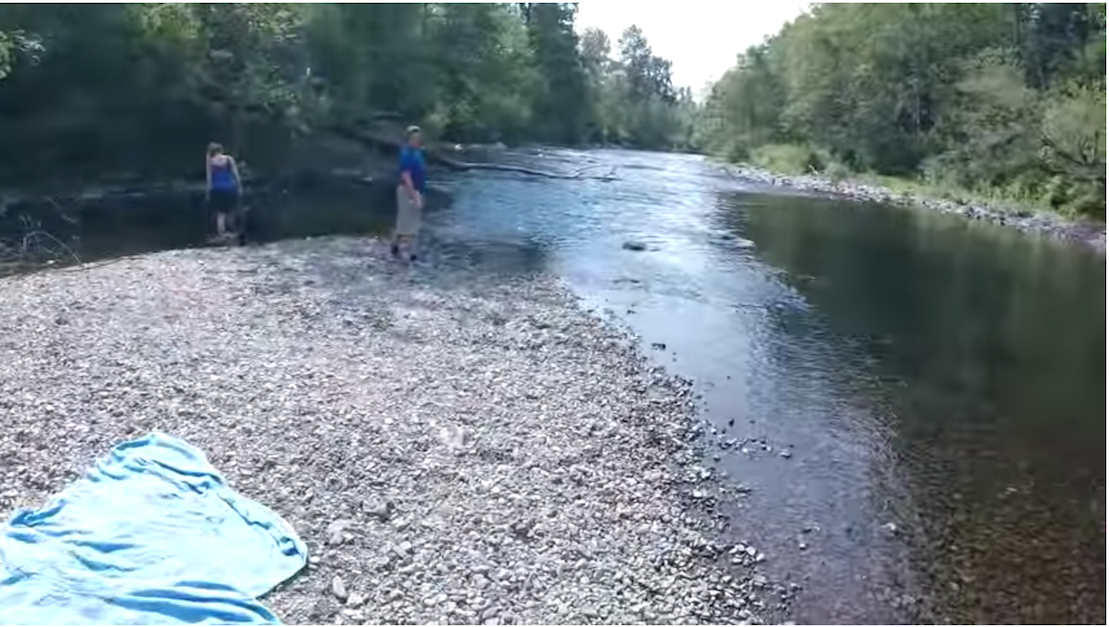 The river’s scenic bank was a popular relaxation spot for the locals. The river drew people to it, but until a man found the suspicious container, nobody knew just how deeply it could draw a person in.

The man had spotted the mysterious ice cooler, bobbing silently along the river. Curious, he fished it out, but he never expected to find anything inside. And when he opened it, he wished with all his heart that he hadn’t. 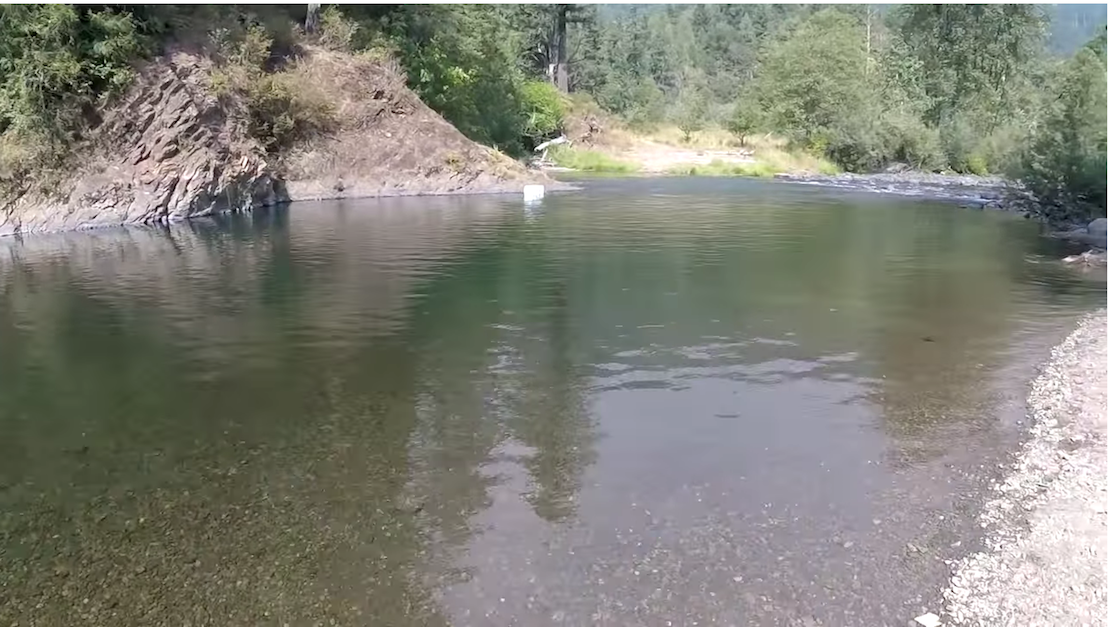 Finding a mysterious container floating downstream seemed like the stuff movies were made of. At first, the man used his phone’s camera to zoom in on the object to get a better look.

When he had ascertained that it was a cooler box, he assumed that one of the picnicking locals had lost it in the river. With his curiosity getting the better of him, he decided to fish it out. But, in order to find its owner, he would have to look inside. 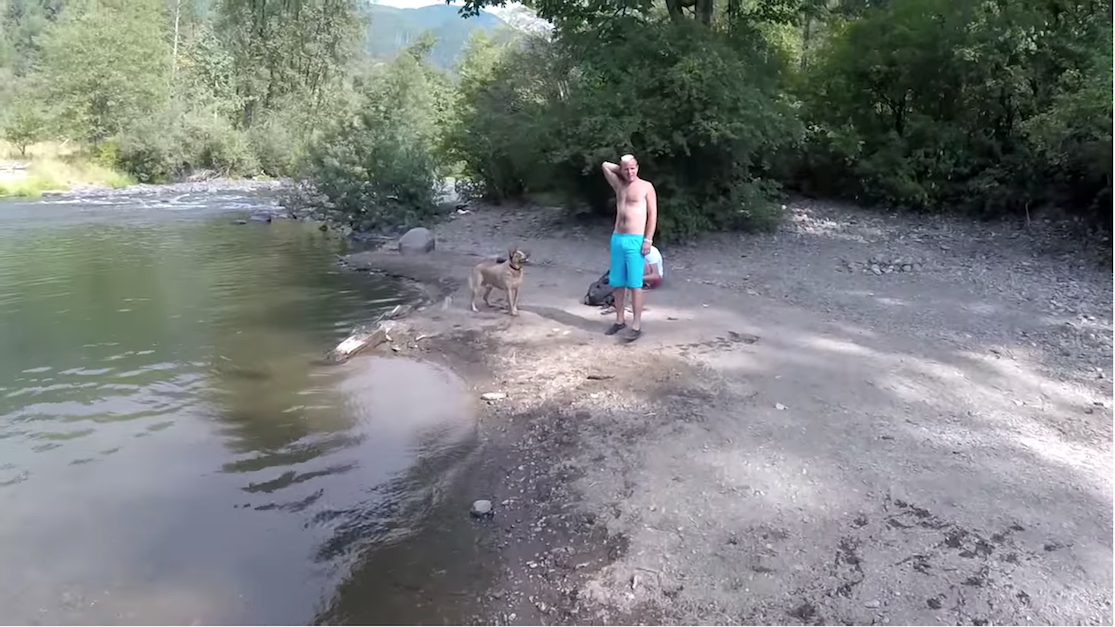 The man then started to ask the people around him if they had lost a cooler box, but nobody had. Nobody recognized it, and most hadn’t even noticed it floating in the river.

Approaching a pair of men who had been swimming with their dog, he asked them if it was theirs. But the mysterious cooler box didn’t belong to them either. They were equally curious about its contents. 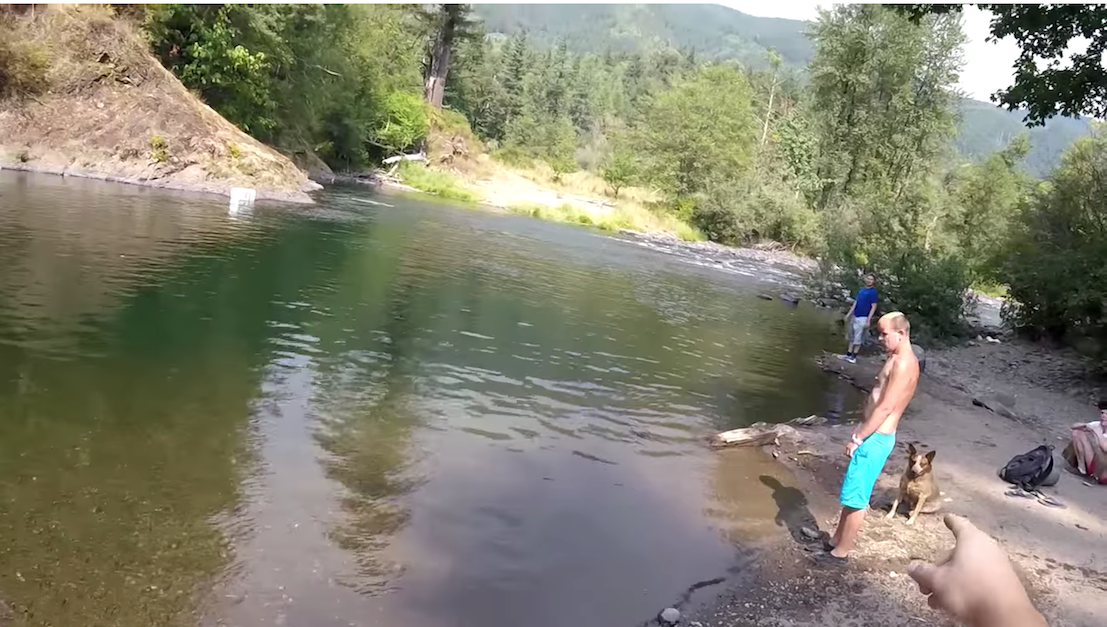 “What if it’s treasure?” the cameraman asked excitedly. Then the other men started to speculate as to what could be inside. But who would swim over to retrieve it?

The cameraman said that he would do it himself, if only he was wearing his swimming shorts. “I vote this guy,” he said, pointing at a man with blue swimming trunks, and he had no choice but to comply. So it was settled. As the man in blue swimming shorts got ready to wade into the river, the cameraman skipped a flat stone across the water to judge the distance. He assured the unwitting man that there was no need to hurry, saying “I don’t think it’s moving for a while.”

The man in blue finally began to wade until he was hip-deep, then he started to paddle. His dog followed him, too, and he reached the water cooler in no time. Then, anticipation began to grow. 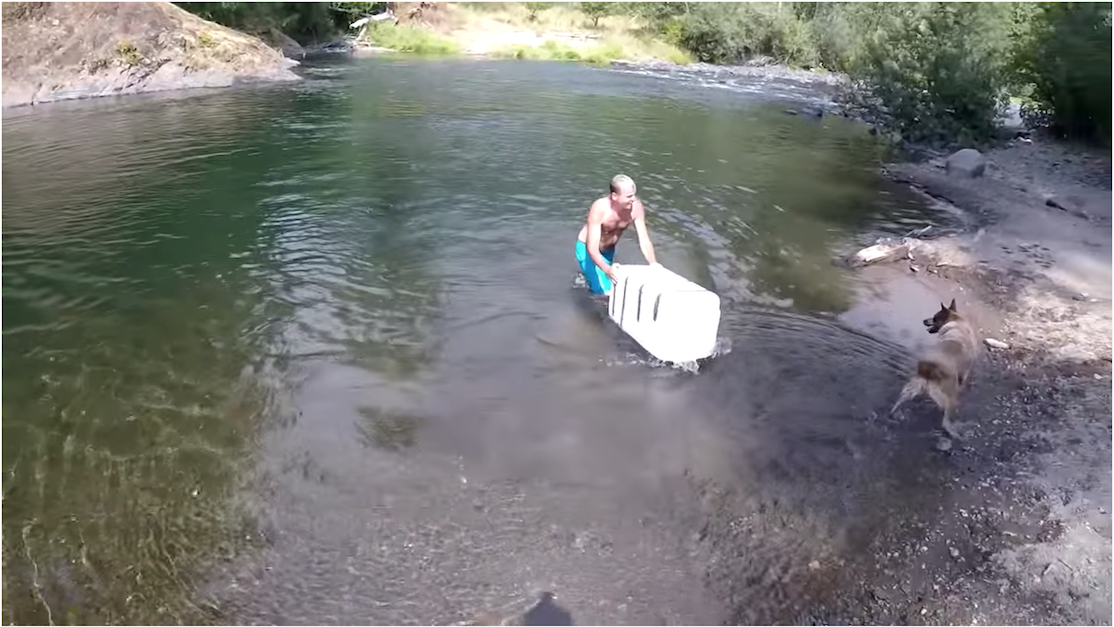 The cameraman saw that the man had made it to the cooler and yelled: “Float it over!” Everybody on the shore waited excitedly for the man to reach the river bank as he pushed the container to the other side of the river. “It’s like Christmas!” someone shouted.

The man wasn’t having much trouble pushing the cooler, so the onlookers reasoned that it couldn’t be too heavy. When he finally made it back to shore and pushed the cooler up the bank, people started to notice something odd. 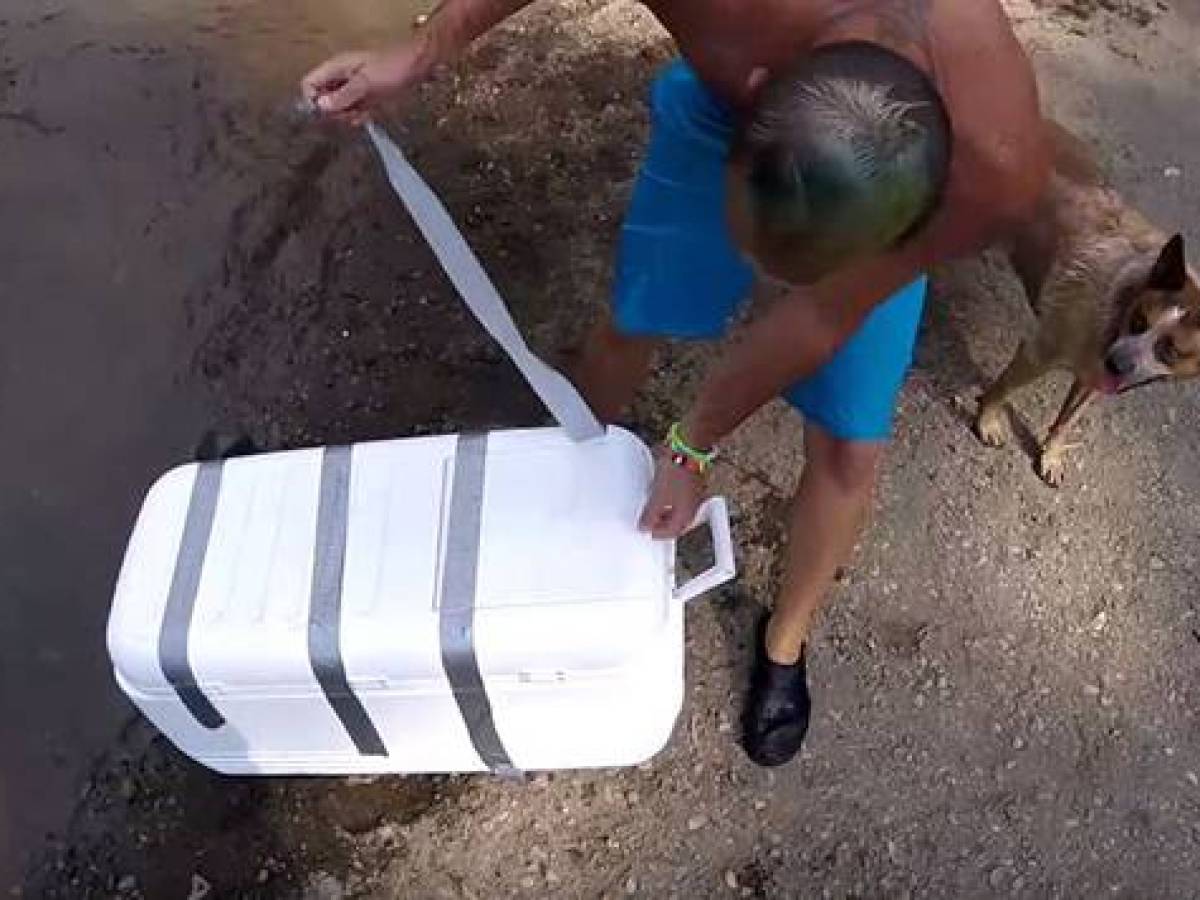 On closer inspection, the cooler had been sealed with duct tape. This meant that someone had known that it would end up in the river. The cameraman, recognizing the brand, asked: “has it got one of those hatches?” Then, he walked over and waited for the man in blue to carefully peel the tape off the cooler.

But neither of the men could ever have expected what they were about to find. 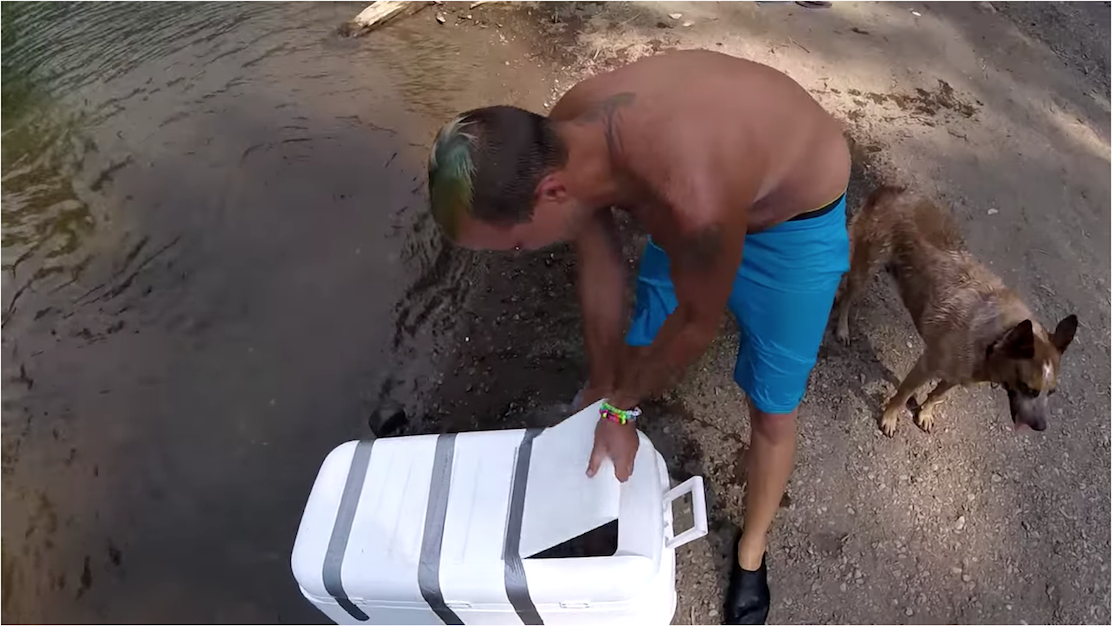 After the duct tape was removed, the man lifted the hatch and took a peek inside, but leaped back with a curse, exclaiming “What the…!”

Then he looked right into the camera with his eyes wide in disbelief and fear. But what could have been inside the cooler that had frightened him so much?

Could It Really Be? The cameraman pushed the man aside and looked in the cooler for himself. When he saw what lay within, he reeled. His brain couldn’t process what he saw, and he too leaped back and cursed. He had seen tiny limbs inside, but something told him that this couldn’t be right.

Approaching the cooler again, he looked inside for the second time. Then, he threw his head back and began laughing maniacally. 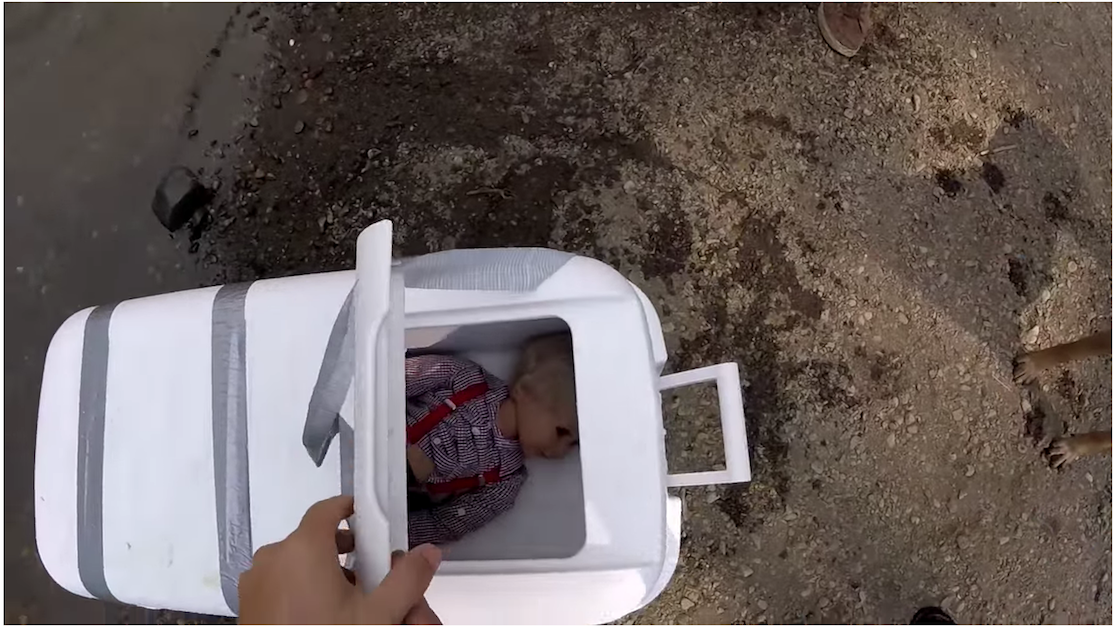 There, inside the cooler, was an eerie sight. The two men still couldn’t believe their eyes. It was a baby doll. The men stood still, laughing nervously. Then, a few onlookers approached the cooler, and they all had a similar reaction of blind fear, followed by apprehension.

“There is a body in there,” one man joked, but there was no humor in it. Because with the doll was a sinister message, written inside the cooler. The cameraman whispered: “I’m like, shaking.” But not all of the men were so spooked. They couldn’t wrap their heads around why someone would hide a doll in a cooler in the first place. “Wait, maybe there’s cocaine in there,” one ventured.

Then the man examined the doll closely, but there was nothing inside. The men continued to search but found no clues. Until they noticed something scrawled down the inside of the box. Then, one of the onlookers approached, wondering what all the commotion was about. The cameraman quickly snapped the hatch shut, and told her to look for herself. He was hoping to startle her as they all had been—and it worked.

The woman jumped back and cursed, too. After her fright, she exclaimed, “Who does that?” Only a truly disturbed person would come up with a stunt like this. “I guess somebody gets a free cooler out of it,” the cameraman quipped, “Dibs on the doll.” Then, more people gathered around to see the mysterious cooler and its unsettling contents for themselves. MrTechnicalDifficult, a popular YouTube channel, later uploaded the video.

It soon went viral, garnering millions of views and thousands of comments. The commenters expressed disbelief and amusement, but some were terrified. One user commented: “PUT THAT THING BACK WHERE IT CAME FROM OR SO HELP ME,” He was one of the many viewers who believed that the doll was part of something much more sinister.

Some believed that it should be left alone, while others suggested that it was a prank that had been set up by the cameraman himself, saying: “He just put a doll in a cooler then taped it and then, finally he put it out in a river and started recording.” What do you believe?