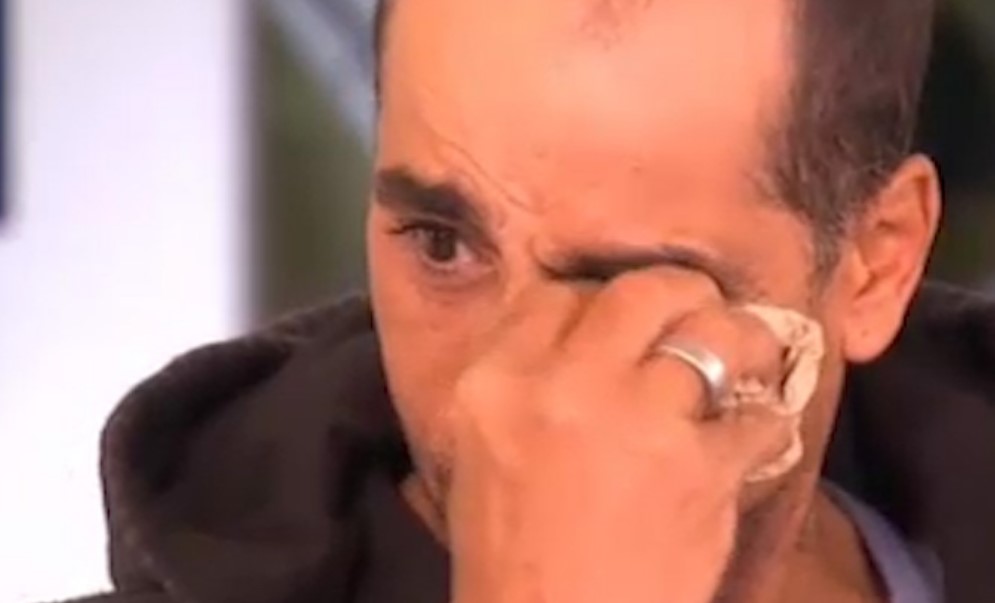 He bent down to pick up the check and studied it carefully. He had to read the amount written on it again to be sure his eyes weren’t deceiving him. He could just go and cash it, he thought, looking around…did he dare? Then, he turned it over and noticed that something was written on the back. Without a second’s thought, he started to run. 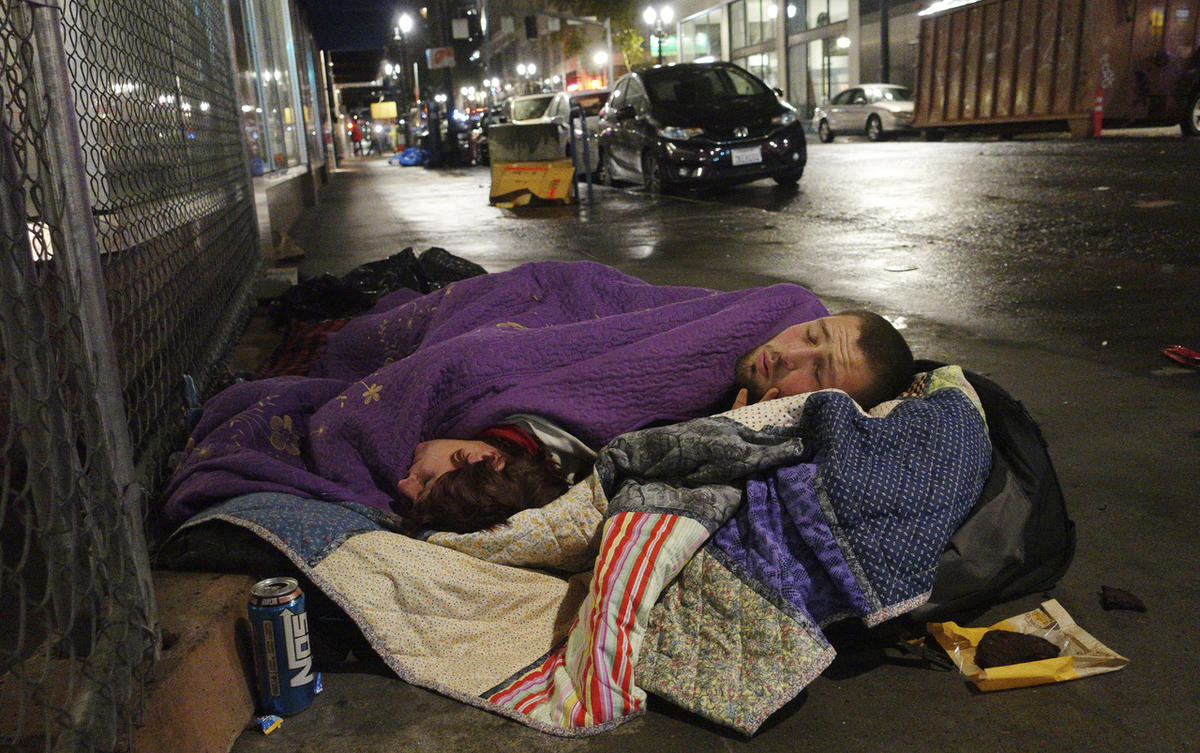 Elmer Alvarez was living on the street, and things just couldn’t get any worse. He never thought it would happen to him, but here he was–at the proverbial rock-bottom. His personal demons taunted him day in and day out.
He thought he would see a change after he had gotten clean, now that he felt like he had finally gotten his life together, but still, his life choices came back to haunt him. 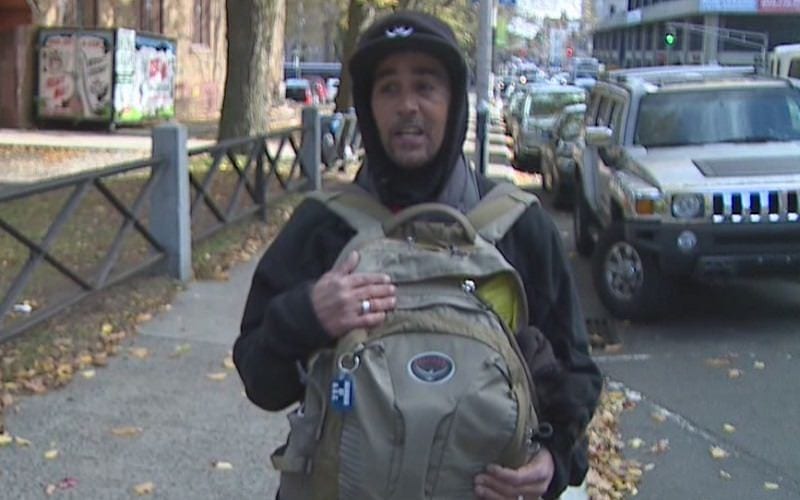 To make matters worse, winter was coming to Connecticut. Although Elmer had endured a few, this one was set to be particularly bitter. His hopeless sigh turned to steam in the chilly November air as he set out to stand at the place he seemed to have the most luck.
He relied on the kindness of strangers now, and he had no idea what this fateful day had in store for him. 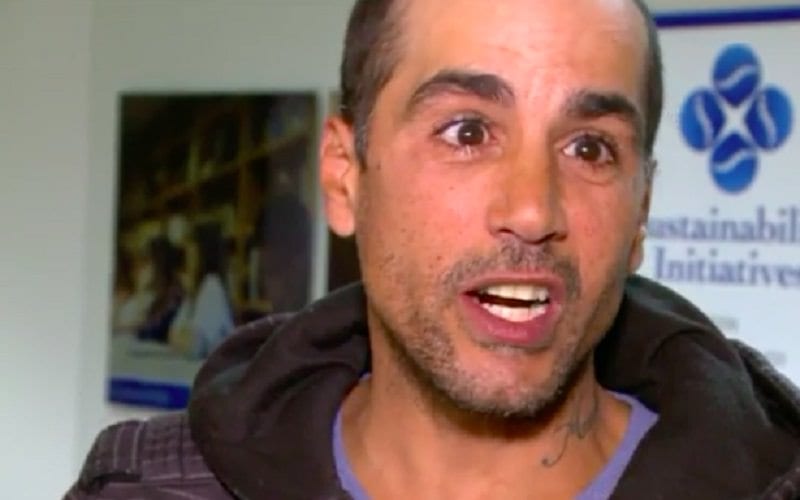 Elmer would recount later that the events of this particular day would change his life forever, although he didn’t know it yet. He plodded along through the chilly morning, but today he seemed invisible–like a ghost wandering the streets of Connecticut.
“Can you spare any change?” he asked passersby, and every now and again someone would stop and fish out a few coins from their thick jackets. Elmer decided it was time to move on, and began the long walk to another block. People hurried by, their faces covered by thick scarves and their hands firmly in their coat pockets, their minds on what to order for lunch and the long workday ahead.
Elmer wished he had the luxury to worry about these things, but he was in survival-mode, wondering about where his next meal would be coming from–if it came at all. Suddenly, he spotted something lying on the ground. 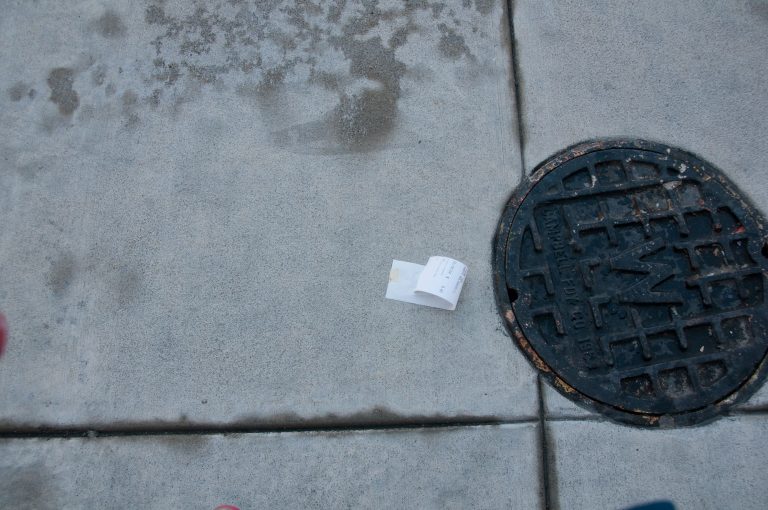 It looked like a piece of paper, hurriedly dropped and forgotten there on the pavement. A gust of icy wind blew up and caught it, making it flutter and dance along the sidewalk. Elmer doesn’t know why he did what he did, but he somehow knew that this piece of paper was entwined with his destiny.
He walked deliberately up to it and bent down to catch it in his frozen hands. But when he saw what was written on it in black ink, he almost blacked out.


No Ordinary Piece Of Paper

Elmer examined the piece of paper again, and he realized that his tired eyes weren’t playing tricks on him. Someone had dropped something that could make all his dreams come true. It was a signed check, but the block where the beneficiary would have been written was left blank.
Even more surprising was the staggering amount that had been written on the watermarked paper. 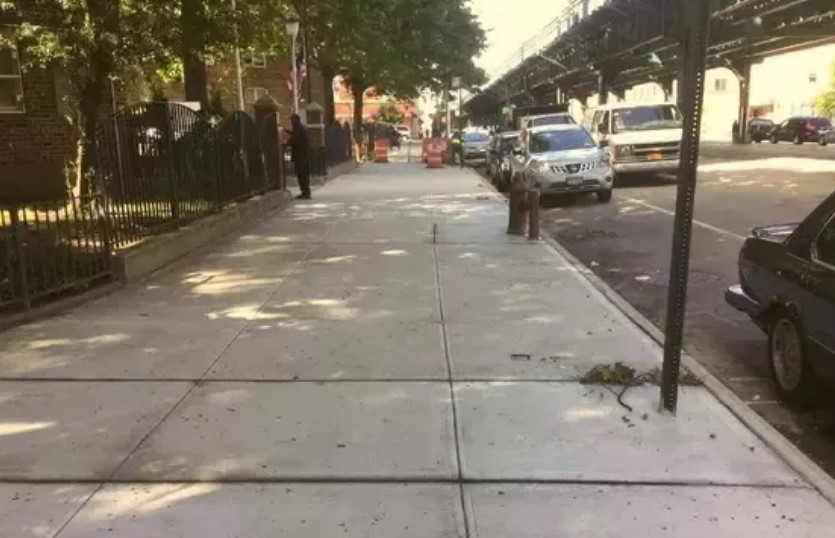 Elmer’s mind raced as he looked at the numbers again and again. The amount was for $10,000–and it could all be his. All he would have to do was cash it, and he could get back on his feet and even off the streets. He looked around furtively, but there was nobody in sight. Whoever had dropped the check was long gone.
Was this a sign from the universe? Could he? And did he even dare? 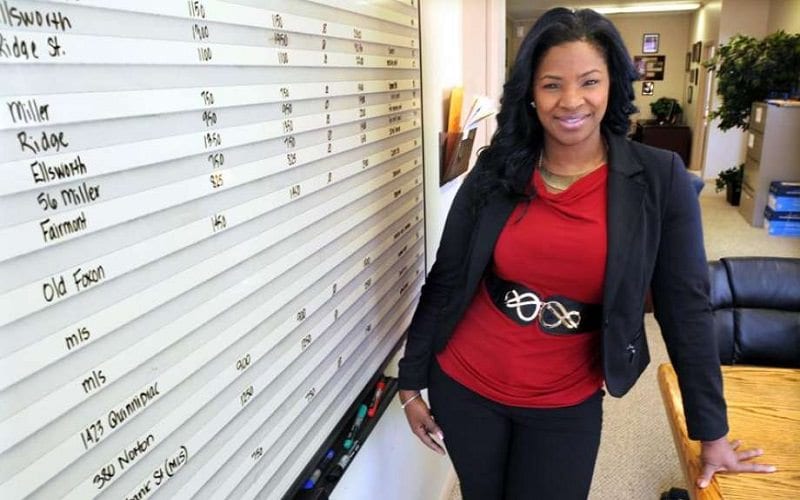 Just a few blocks away from where Elmer was having his mind blown by his miraculous find, Roberta Hoskie sat at her desk in her office.
The CEO and President of both Outreach Realty Services and Outreach School of Real Estate was hard at work, making appointments and planning her day. To make it in real estate was difficult, and nobody knew this better than Roberta.


Making A Name For Herself 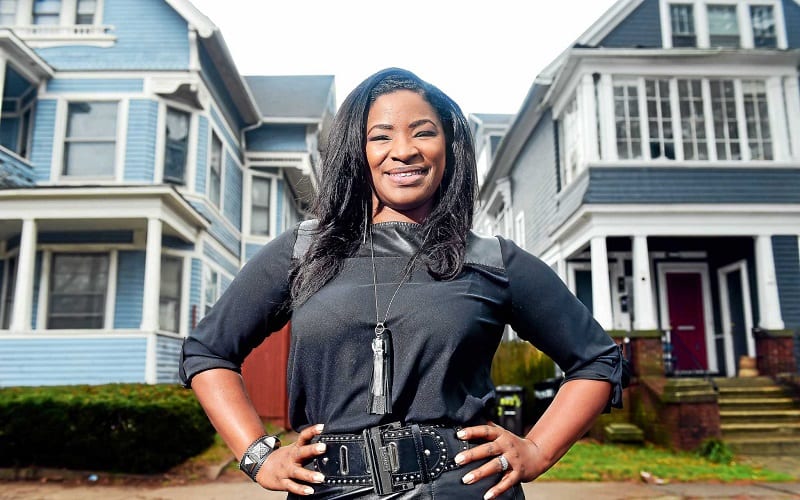 It is hard to believe that this self-made powerhouse of a woman had once been homeless herself. At Just 17 years old and with nobody to turn to, she was a single mother struggling to get by. Thankfully, her luck changed when she applied for an internship at Yale University.
Although she had managed to claw her way out of poverty, she never let herself forget the long and lonely nights she spent out on the streets. 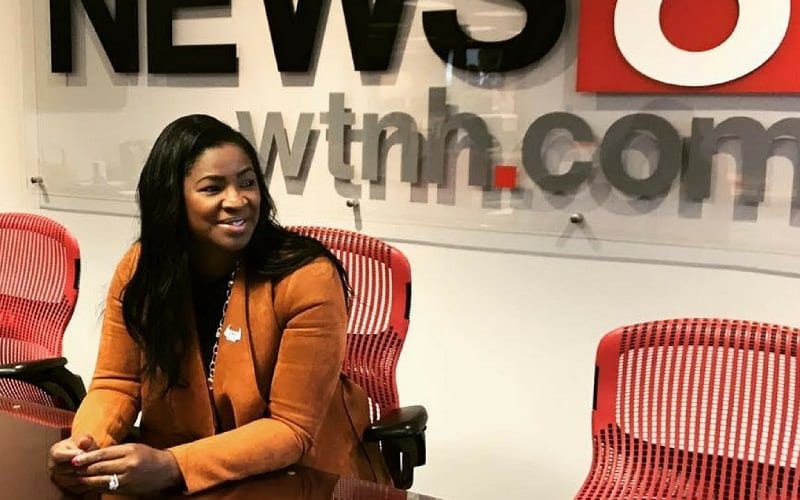 Meanwhile, Elmer turned the check over. Written on the back was a phone number. It was Roberta’s phone number, and although he didn’t know it yet, she hadn’t even realized that she’d lost it.
The two strangers’ worlds were about to collide, and Elmer’s life was about to be turned upside down. Although it pained him, Elmer knew what he had to do. Elmer looked at the check and took a deep breath. Was he really going to go through with this? $10,000 was an enormous sum of money. Was he making the right decision? With a new resolve, he walked down the road that would lead him to his destiny.
One of his friends had a cellphone, and he would need it for what he was about to set out to do. 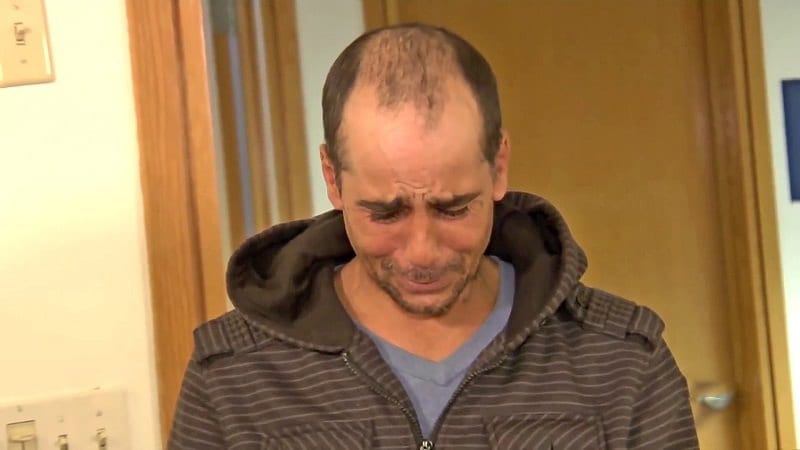 The phone rang three times, and Roberta answered it. The man on the other end of the line informed her that she had lost a check that very morning, and she was floored. She searched her handbag in a frenzy and was horrified to discover that the check was indeed missing. How could she have been so careless, she thought angrily.
Regaining her composure, she politely asked the man where they could meet so he could return the check. Elmer met Roberta on a nearby street corner with his friend and handed her lost check back to her. She was astonished by the man’s honesty, after all, someone else may not have been so honorable when it came to $10,000 on a blank check.
Roberta recorded the entire incident and posted it to Facebook. After chatting with the men for a while, she made an alarming discovery. Elmer was far too proud to inform Roberto that he was actually homeless, so his friend took the liberty of doing it for him. She looked at him in disbelief when she heard the news–this new information made the man’s actions that much more meaningful!
But Elmer never expected how far she would go to repay him. Roberto deliberated for a while about what she could do for Elmer to show her gratitude, and then she reached an incredible conclusion. Elmer and her meeting in the way they did couldn’t be a coincidence, could it?
Fate had thrown the strangers together for a much larger reason. She told Elmer to wait at the street corner and rushed back to her office to get her checkbook. She wrote Elmer a check, and she told him her own story of how she had become a success through sheer willpower and strength. Elmer was floored that she too had known such extreme poverty.
He gratefully accepted her check, but when he tried to cash it Roberta realized that any cash reward would be just a small respite for him, and that he had a bigger problem she could help with. The teller at the bank had refused to cash Elmer’s check, even though it was clearly made out to him and the ID matched. They insisted on giving Roberta a call to clarify that she had indeed given the homeless man the money.
They were suspicious that the check was fraudulent. But two weeks later, Roberta reached out to Elmer again, this time with a solution to all his troubles. After Roberta had posted the video of Elmer returning her blank check to Facebook, the post exploded. Everyone was in awe of the man’s honesty, and he had grown quite a following–even though he didn’t know it yet.
When he met Roberta for the second time at her office, he was greeted by a throng of people, all applauding and cheering him on. But that wasn’t the only surprise he had that day. Elmer was presented with a thank-you certificate from an organization that aided with poverty called Ms. Millionaire Mindset, and then Roberta sat him down and proceeded to unveil her grand plans for him.
She said she was going to “teach him how to fish,” and then explained exactly how she was going to do that.


Teaching him how To Fish Roberta had enrolled him at her successful real estate school, and his classes would be free of charge. She was going to teach him how to pull himself out of the poverty cycle, just as she had all those years ago.
Then, Roberta went on to present a gobsmacked Elmer with an even bigger surprise. Roberta informed him that she had secured him an apartment to live in for the next 6 months–and she had paid the entire rent in full! Elmer’s face crumpled with emotion as he took the enormity of the gesture in, then he leaned over to her and gave her a hug that said all the words he couldn’t.
Roberta had changed his life for the better…how could he ever thank her?


Setting Him Up For Success But the surprises weren’t over yet. Roberta had also set up a standing job interview at her friend’s real estate firm, and once he felt like he was ready, he could go after a career in real estate. “I’m ready now!” he blurted tearfully.
Just two weeks later, Roberta saw the results of all her good deeds for Elmer, and he had some amazing news. Roberta and Elmer waited in anticipation for the results of the real estate exam, which would mean that Elmer was on his way to being a qualified real estate agent. Elmer had studied hard and had attended all his classes diligently, and now the results were finally in.
Roberto took a deep breath and flipped the results over so they could see them together. Roberto grinned widely at the long-awaited results…Elmer had passed his exam! The pair was elated at the good news. Now, Elmer was all set to finally fulfill his dreams. And it was all thanks to the blank check he had found, and his honorable decision to return it to its rightful owner. His sidewalk discovery had set off a chain of events that would end in his life being changed forever.
Elmer is now firmly in the ranks of the National Association of Realtors, and he couldn’t be happier!
Must Read
Human Geneticists Finally Apologize For Horrific Past Experiments On Humans
The World Is Now 90 Seconds To Midnight
New Study Suggests Teacher Evaluations May Perpetuate Academia's Gender Biases