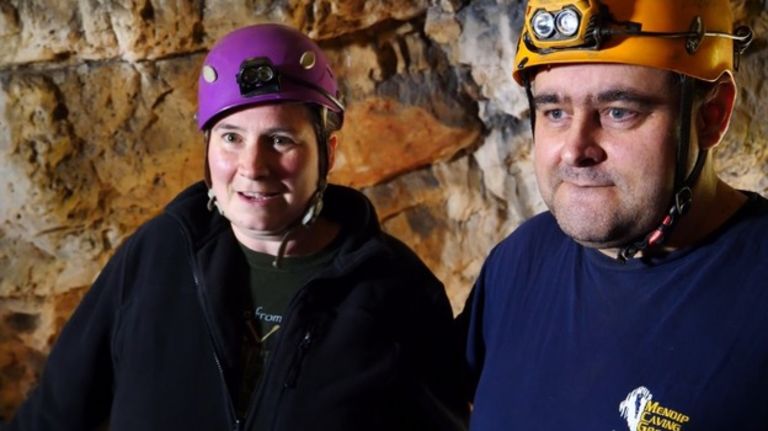 As they studied the mysterious markings lining the cave walls, the realization hit them both at the same time. The hundreds of etchings carved by terrified hands were not graffiti as they had been told, but something much more sinister.
It was clear that something had happened here, deep down in the dark, that had the villagers fearing for their lives. 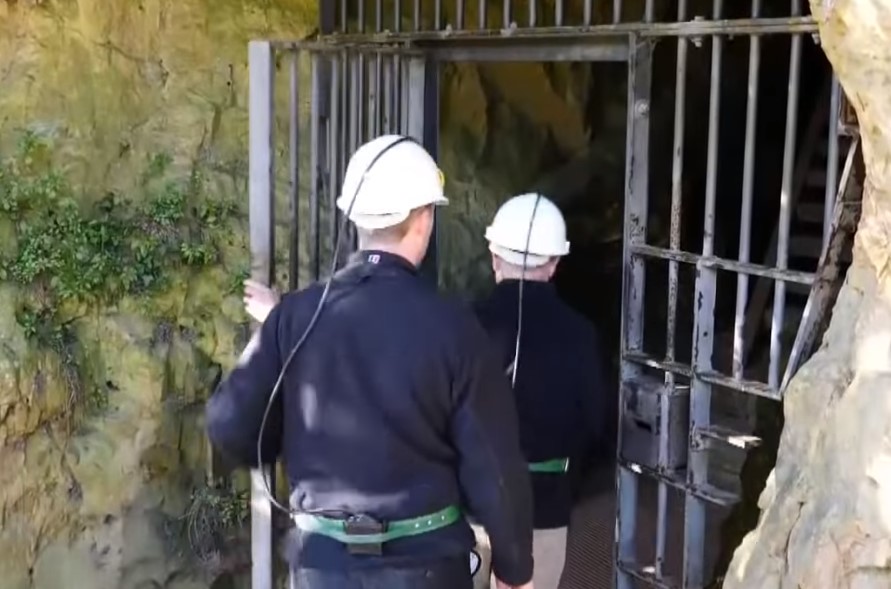 With a final check of the headlights and harnesses, they started toward the entrance of the cave and passed through the famous gateway. It became eerily quiet.
As he descended into the darkness with his wife following closely behind, he thought this would be like any other cave excursion. But he was so very wrong.

The Opportunity of a Lifetime 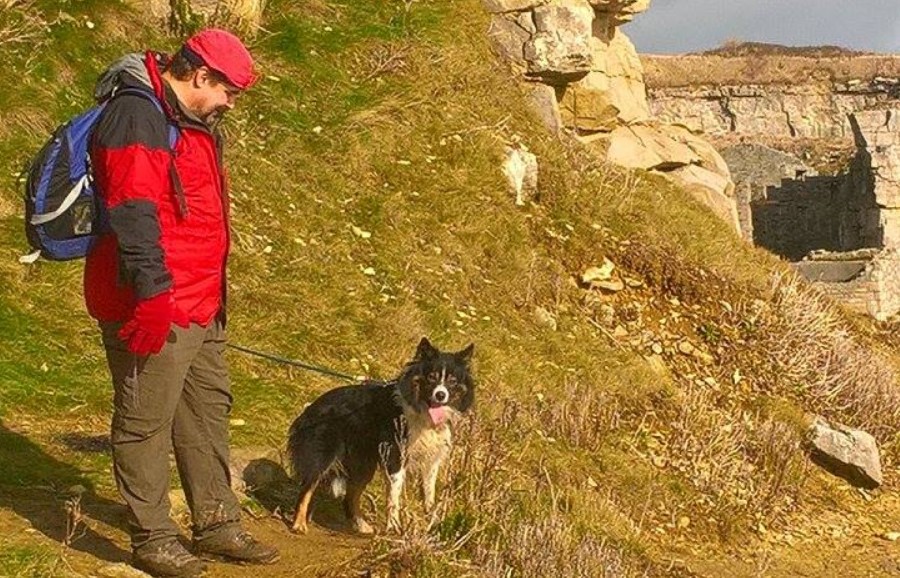 Ed Waters and his wife Haley Clark had a deep love for exploration, particularly caving. When the chance came for them to accompany the Subterranea Brittanica society to an ancient limestone cave located in the British Midlands, they jumped at the chance to see its depths firsthand.
They knew that the Creswell Crags were steeped in folklore and mystery, but they never knew just how close they would come to the ancient terror lurking there. The Creswell Crags can be found near the border of Derbyshire and Nottinghamshire, and the caves are an archaeologist’s dream – thought to be a refuge from the harsh climates during the Ice Age by nomadic humans.
The oldest rock art in Britain resides within the cavern, as well as other – stranger — markings that were made far more recently. 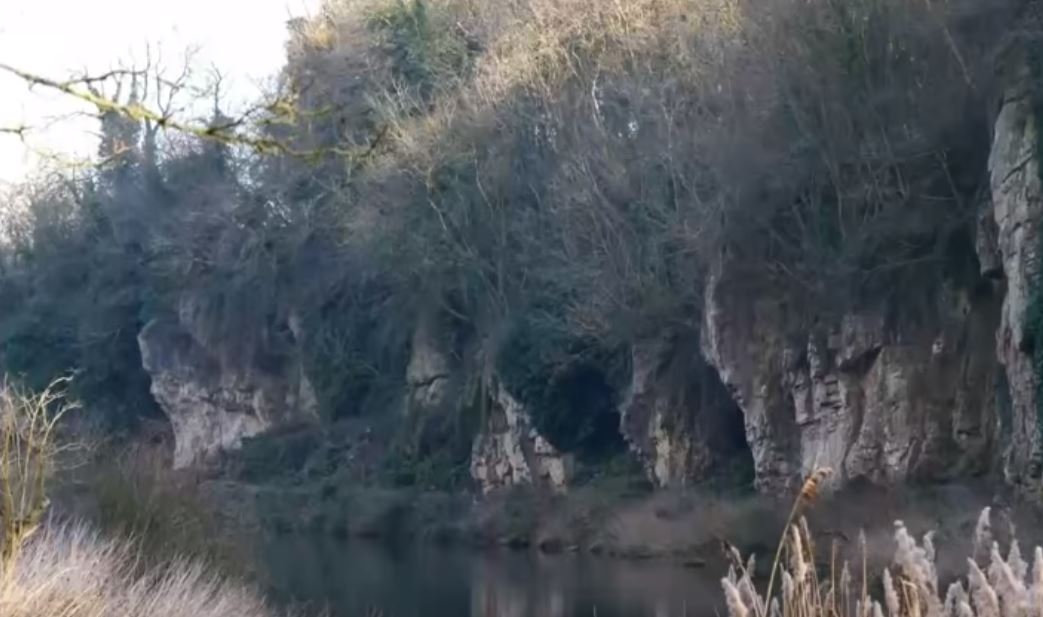 Explorers and cavers alike have all reported a deep sense of foreboding as they venture toward the most well-known cavern in the Creswell Crags, known as the Robin Hood Cave. Even in the brightest sunlight, the entrance stands ominously – a black gateway to another world.
This cave had held a frightening secret for hundreds of years – until unwitting Ed and his wife Haley happened to stumble upon it. 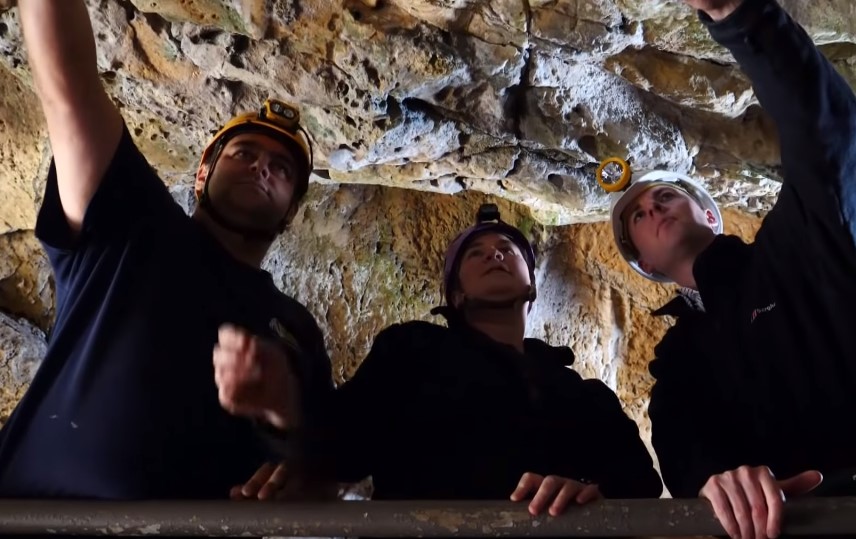 Ed and Haley looked up at the cavern’s ceiling in awe, their flashlights illuminating sections of the rock piece by piece. The tour guide pointed out the ancient etchings — layers and layers of scratches in the stone walls. They covered almost every surface. “Graffiti from the Victorian era,” he remarked flippantly.
But then, something caught Ed’s eye.


Scratched Into the Stone 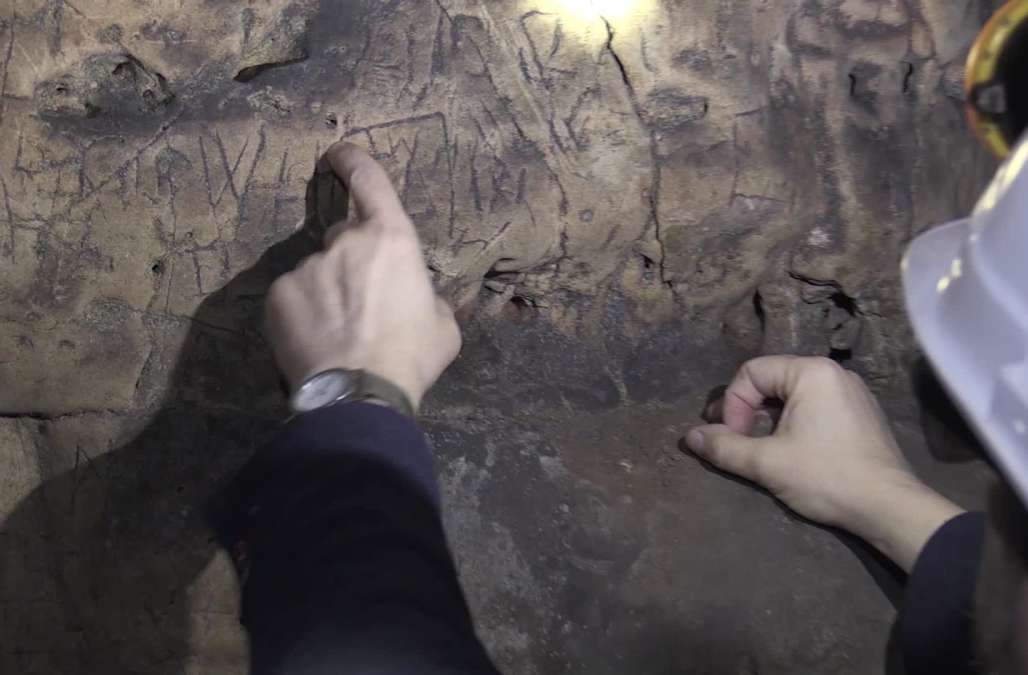 There was something about these markings that he had seen before… the way they were frantically and chaotically etched into the stone. He turned to look at Haley’s face, and he saw the recognition there too.
Without saying a word, the pair broke from the group and ran to the far wall, where the scratches were the most obvious. Running their fingers over the etchings with their fingertips, they exchanged a glance. Haley whispered “V V”. Sure enough, the initials “V V” were there, as clear as day. The pair knew exactly what the marks meant now. The two ‘V’s represented the phrase ‘Virgin of Virgins’, but why was it etched here, deep underground in an ancient cave?
The ‘V V’ symbol was a plea, beseeching Mary of Nazareth for her protection. But what did the people need protection from? The ominous ‘V V’ symbol was repeated dozens of times, all over the surface of the rock face. It was carved almost compulsively with a trembling hand, over and over again.
Ed and Haley were now absolutely sure what they were dealing with and rushed to share their findings with the rest of the group. John Charlesworth, their guide, felt an immediate prickle of fear. They followed the eerie markings to a four-foot hole in the ground, where the marks reached a terrifying and silent crescendo. John Charlesworth called the Creswell Heritage Trust immediately, and experts started to arrive to examine the eerie scene.
On closer inspection, the marks seemed to be endless – scratched into every cranny and crevasse of the cave. Among the many ‘V V’ inscriptions, there were crosses, boxes, and maze patterns. And these symbols served an alarming purpose for the townsfolk of Creswell. “It was like something from The Shining,” recalled Paul Baker, director at Creswell Crags. “These marks were either to keep something in, or to keep something out.”
The strange engravings, or apotropaic markings, are known as witch marks. But what dark forces had driven the people to etch these pleas for protection on the walls of this cave? Allison Fearn, a Ph.D. of Archeology at the University of Leicester, reveals that these particular markings are usually found on places of worship or the doorframes of homes. But the act of painstakingly carving them into the stone walls of a cave is a product of a much deeper fear.
The sheer quantity of the witch marks found inside the caves indicates that something strange was going on in Creswell. Historians dated the markings at between the 14th and 18th century, and Allison believes that the reference to The Virgin Mary within the protective marks indicates that the villagers were afraid of demons.
The townsfolk of Creswell clearly believed that the abyss within the Creswell Crags was a gateway to the underworld, and they were terrified by what might live within. “The marks are incredible. I did actually swear when I first saw them, I had never seen anything like them,” Allison added.
“They probably acted as protection, from spirits, demons fairies, and witches. We know that witches were feared and witch hunts were happening all over Europe. They definitely seem to have some kind of fearful context.” To date, the witch marks in the Creswell Crags is the largest collection ever found, with the marks estimated at least a thousand in one cave alone. The previous record was held by a British cave in Somerset, at a meager 57 markings.
“The people who made the marks may have thought the big hole was some kind of door to the underworld or even a demon prison, but they were certainly worried about what was going to come out of it,” John Charlesworth said in an interview. “You could think of the witch marks as worry lines that demonstrate the anxieties of the time. These marks are a kind of folk magic and the hole in the ground may have represented some kind of Pandora’s Box,” John added.
“These witches’ marks were in plain sight all the time. Being present at the moment their true significance was revealed will stay with me forever.”

Duncan Wilson, Chief Executive of Historic England, believes he has a logical explanation for the supernatural markings.
“Two hundred years ago, the English countryside was a very different place, death and disease were everyday companions and evil forces could readily be imagined in the dark,” Duncan explains. “We can only speculate on what it was the people of Creswell feared might emerge from the underworld into these caves. Another theory about the reasons for the mysterious witch marks is that the villagers of Creswell were facing an influx of deadly disease, poverty, or famine. These very real threats could have been attributed to dark forces, or witches.
John Charlesworth thinks that the land itself may have led to such superstition among the town’s inhabitants, explaining that the rolling natural landscape incited fear of the unknown. “These are places where supernatural forces in an untamed non-human environment could be at work. Local people are in the jaws of this monstrous landscape,” John explained.
Nevertheless, the witch marks were an important and historical find. They give a unique insight into the everyday lives of those who lived there hundreds of years ago. However, the fact that they weren’t recognized immediately for what they were was a blunder on the Creswell Heritage Trust’s part. Paul Baker commented on the enormous mistake: “But we told people it was Victorian graffiti,” he said. “We had no idea. Can you imagine how stupid we felt?” Then, he added, “They are everywhere. How scared were they?”
Although we may never truly know what was terrorizing the people of Creswell so badly that they felt the need to etch hundreds of protective symbols into the cave, could it be possible that they believed that the abyss was the gateway to hell?
And, even more importantly, are the witch marks still doing their work?
Must Read
New Study Suggests Teacher Evaluations May Perpetuate Academia's Gender Biases
Rare Earth Elements Can Potentially Be Pulled From Coal Waste
United Arab Emirates Names Oil Chief To Lead Upcoming Climate Change Conference