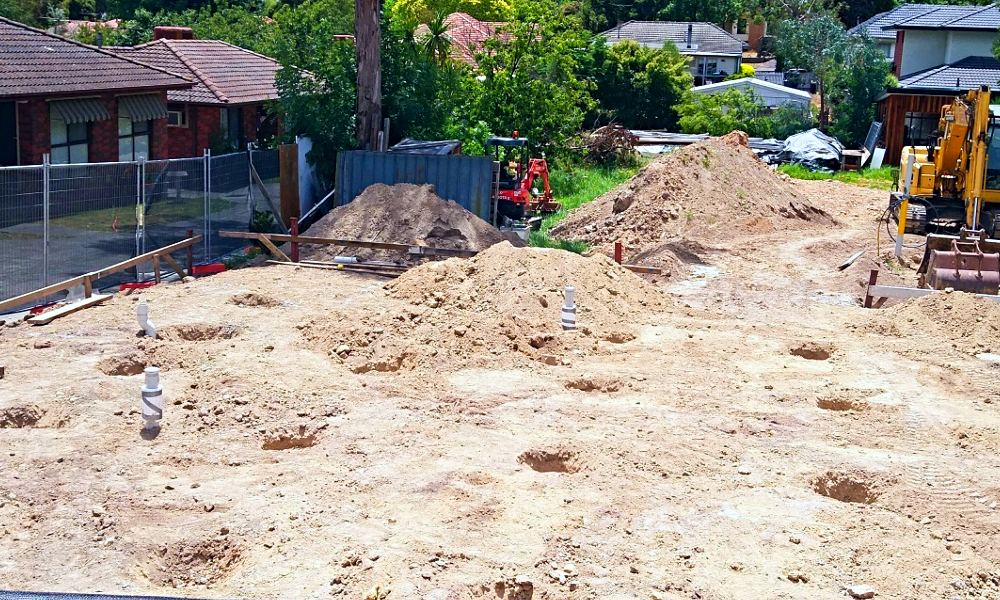 Holes Out Of Nowhere

She went to bed with a lovely view of the green yard next door, but the next day, she was awoken to the sound of her new neighbor drilling a bunch of holes in the ground.

It wasn’t her property, and she hated to stick her nose in where it wasn’t wanted. All they could do was watch as the events unfolded. It could have been anything. Maybe a septic tank problem? Pest infestation? Jill Thompson stood at her bedroom window scratching their head as more holes appeared in her neighbor’s yard. What was he doing?

She was tempted to find out what he was up to, but when she saw him digging dirt out of the ground with his bare hands, she was too scared to even ask. Jill hadn’t met the man personally yet, although she had waved to him from across the street when she saw him moving in. But the holes he was drilling in the ground of his yard made her very suspicious.

One morning, an old, rusty truck backed up to the man’s property. Jill and a few other curious residents watched as long parcels were unloaded from the vehicle. What was he doing over there? 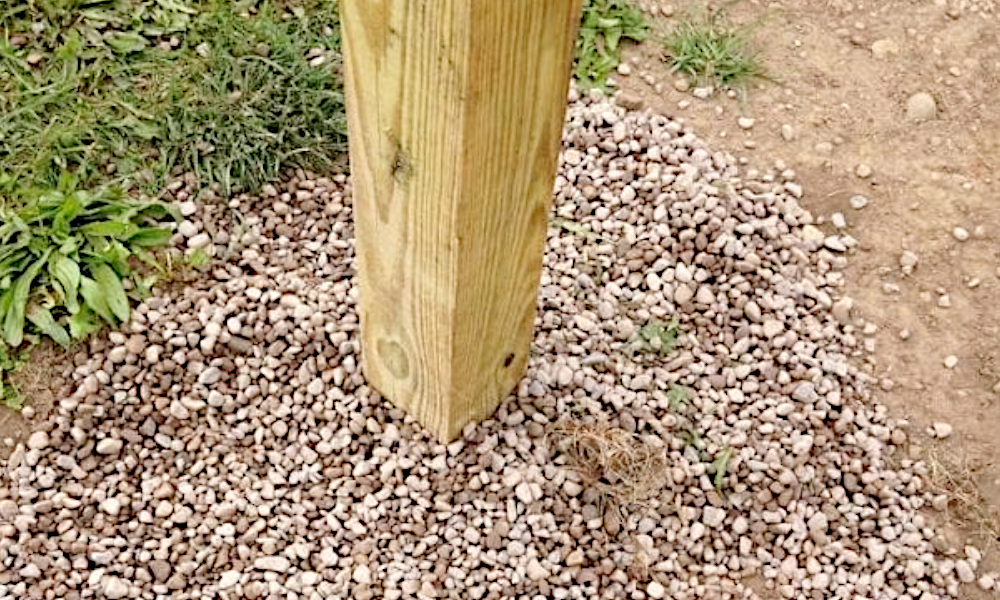 A few days later, Jill realized that the delivery had been several wooden posts. He was building something!

The posts protruded out of the holes in an odd formation like some kind of druid monument, which puzzled Jill and the other onlookers. Then they noticed a new addition to the construction team that caught their eye. As the diligent man continued to work on the strange project, a young boy emerged from the house and came over to join him.

“That must be his son,” said Jill to the other neighbors. But the question still remained: what were they doing in the backyard that required so many holes and wooden posts?

The neighbors were now all fascinated by what was going on in the man’s backyard. They watched as the young boy fetched materials and tools for the man – the kid was certainly eager to help get the project done.

He even picked out some weeds and carried some big stones in his tiny hands. It was a very cute sight to watch the miniature workman in action – but still no answers. At this point, it almost seemed a shame to ask what they were building as it became a hot topic in the neighborhood to try to guess what the father-son duo was working on.

With the wooden posts now all upright – like ridged soldiers made of wood – a huge pile of gravel that appeared in the man’s yard further confused the curious residents. But they started to get a clearer idea of what was going on. 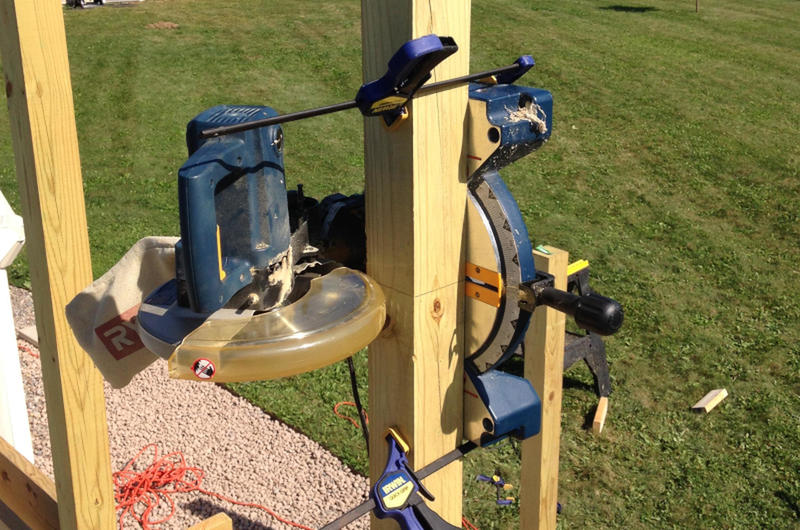 It appeared that the man and his son had been working on the foundations for some kind of structure. But for what?

Not a lot happened in their sleepy suburban street, so Jill enjoyed concocting theories as to what was being built. With foundations this strong, how tall was this thing going to be exactly? Was it going to ruin the aesthetics of the well-kept neighborhood? 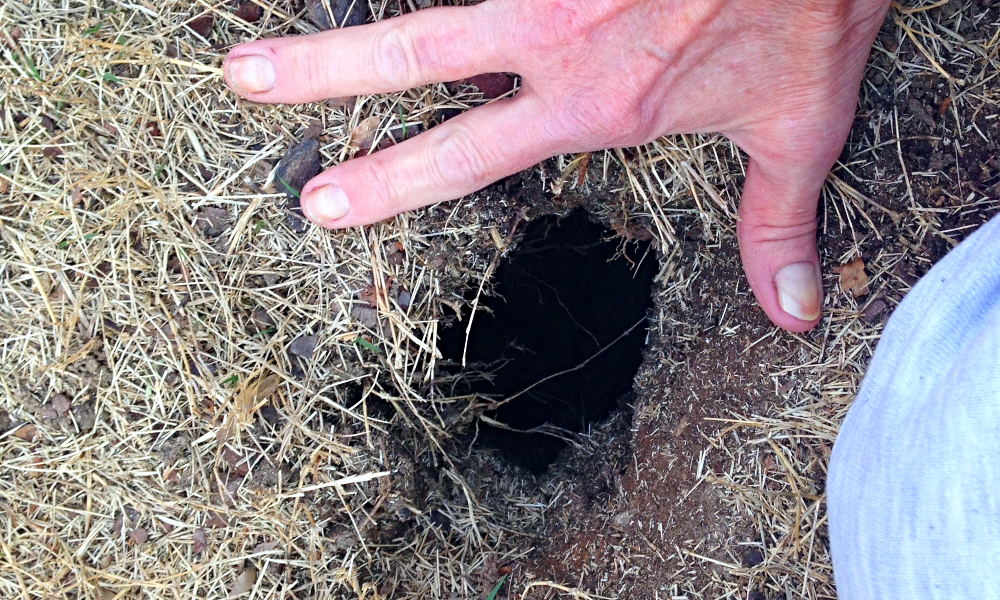 Before long, more lumber and construction materials arrived at the house and it became clearer that the man was building something ambitious.

But it wasn’t just nails, screws, hooks, and mounting brackets that were arriving at the property, there were some new faces turning up too. But who were they and why did he need so much help? 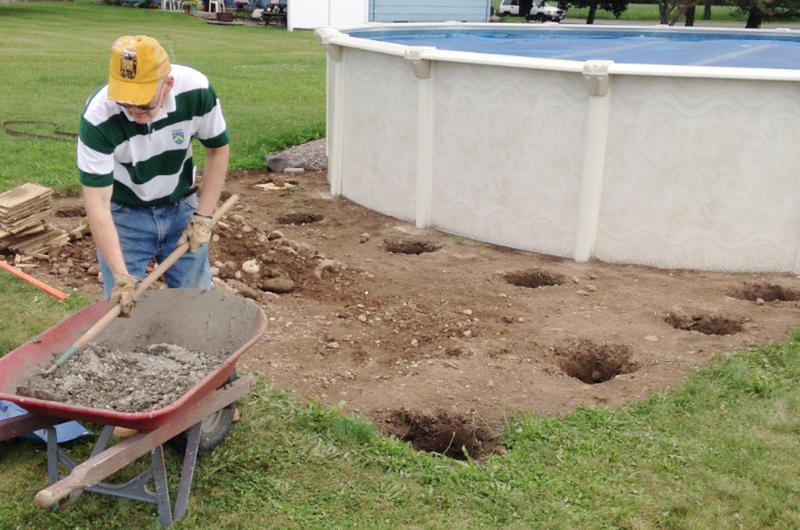 Jill and her neighbors heard a lot of commotion coming from the yard as more laborers piled in. Before long, the structure seemed at least halfway completed. They couldn’t wait to find out what it was.

Now the project was really taking shape and Jill could see some very specific features that gave clues as to what the final result was going to be. 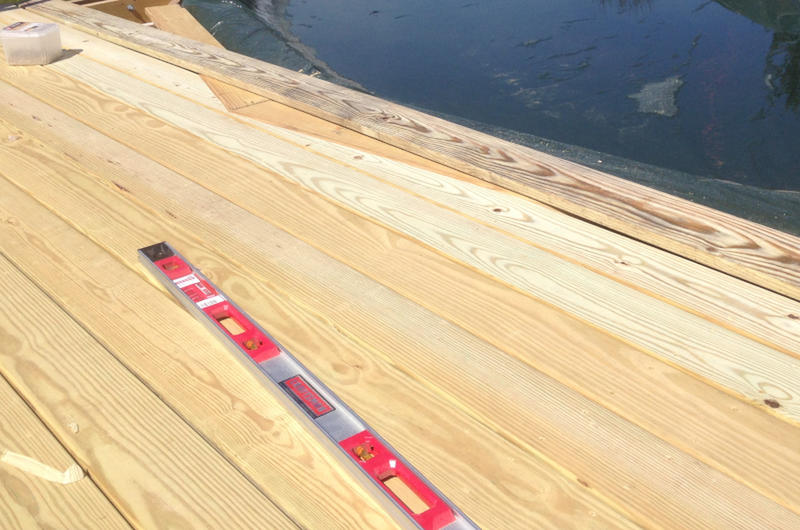 More recognizable elements of the structure started to emerge – a floor and a set of stairs. Now it was beginning to take shape.

More hints fell into place and the puzzle became more complete. Was it a small storage hut? It became apparent that the man and his team knew what they were doing, but what was the end goal?

Ahhhh! We Get It! 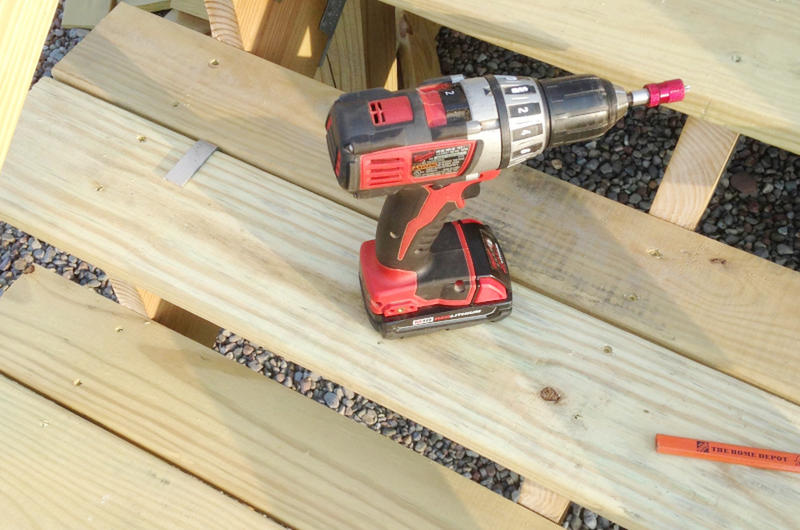 Autumn had arrived. Kids were getting ready to go back to school and the leaves were changing from green to beautiful shades of brown and red.

The project still wasn’t finished. However, enough of it had been completed that Jill finally knew what was going on, and they were all very excited! Perhaps this was something they could all share? 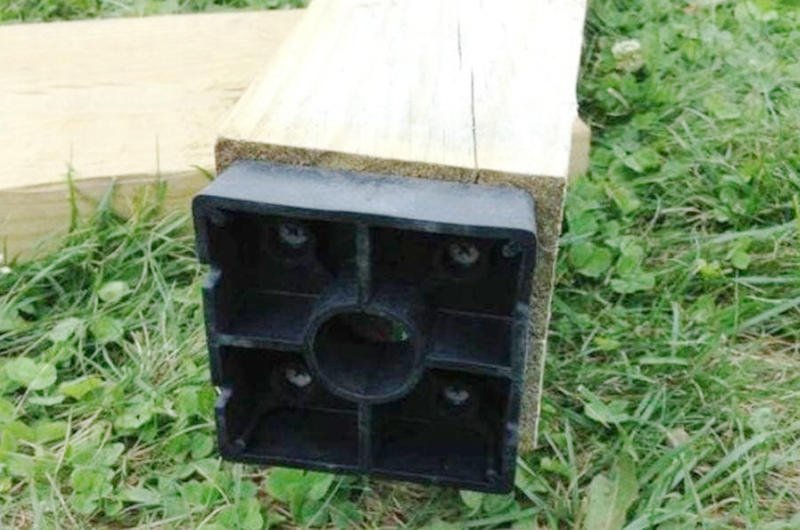 Then came the bad news. Just when Jill and her neighbors thought the project was finally about to be revealed, the man had put away his tools and materials and covered it all up.

Since the weather was getting colder and construction was getting harder, it looked like he would have to wait until next spring to complete his many months of work. 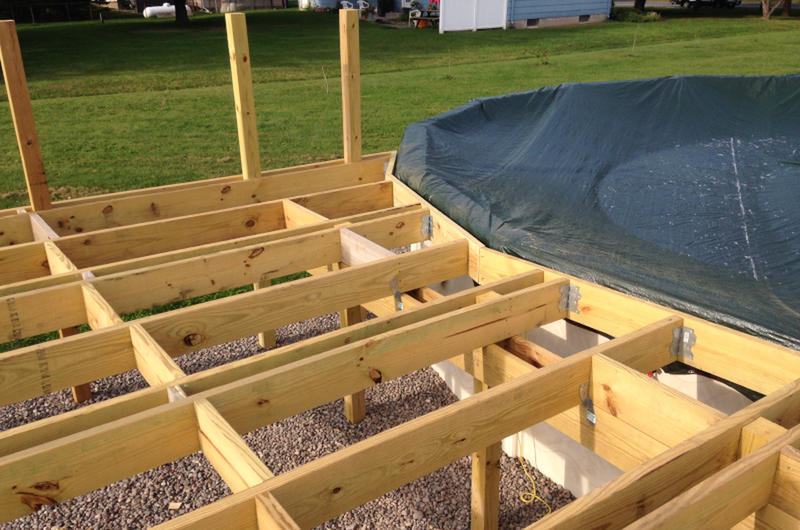 Fast forward to next spring and the man had finally started things up again. He peeled back the weathered tarps, got out his tools, and pulled out the rest of the wood that had been in storage.

Neighbors soon started peering over the fence again The area took on the familiar sounds of banging, drilling, and sawing. By summer, they would finally get to see what it was. 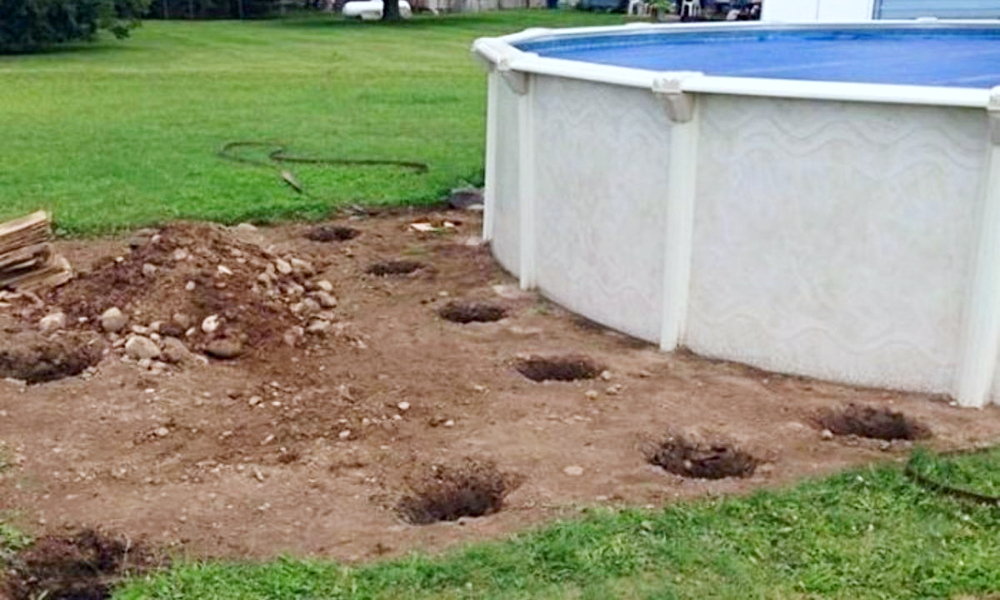 Since moving in, the man and his family had enjoyed an above-ground pool for a while, but getting in and out with the flimsy ladder wasn’t just awkward, it was dangerous for their son.

The father had decided enough was enough and they needed a new deck for easier access. So, how did his DIY skills work out? The end result was something stunning – a professional contractor couldn’t have done a better job. A year of wondering what they were looking at had come to an end – Jill and her neighbors were really very impressed.

Sturdy beams held the floor in place, seams were met perfectly, angles were carefully measured, and all edges were beveled for decoration. As if that wasn’t enough, the family added a few finishing touches to turn it into something out of a magazine. 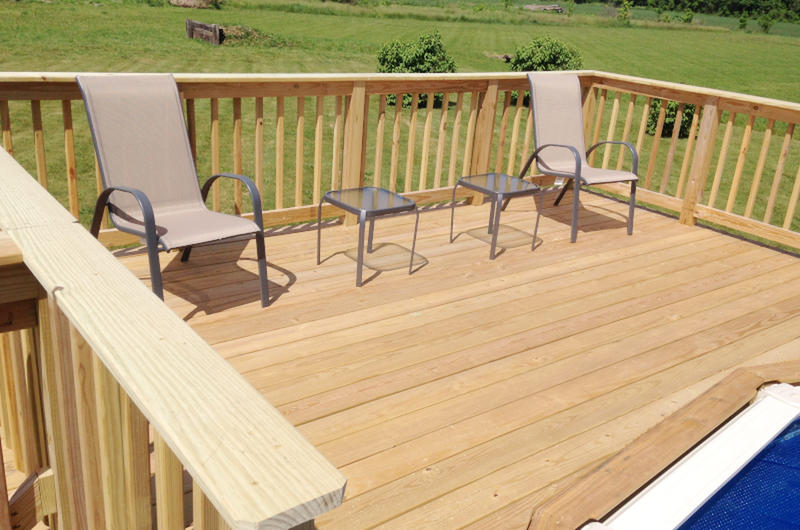 A coat of sealant was added to protect it from adverse weather and keep it pristine for years to come.

They also added a set of grey and brown deck chairs and tables so they could lounge in the sun after a cool swim. Jill took some notes. She’d learned a thing or two from watching this DIY project in action. A project like this isn’t something to take on lightly. A lot of people think they can nail a few boards together and knock up something like this in a few months.

But that couldn’t be further from the truth – you need time. It also takes a lot of know-how and practice, as well as learning from mistakes. But there is some good news for budding DIY-ers. 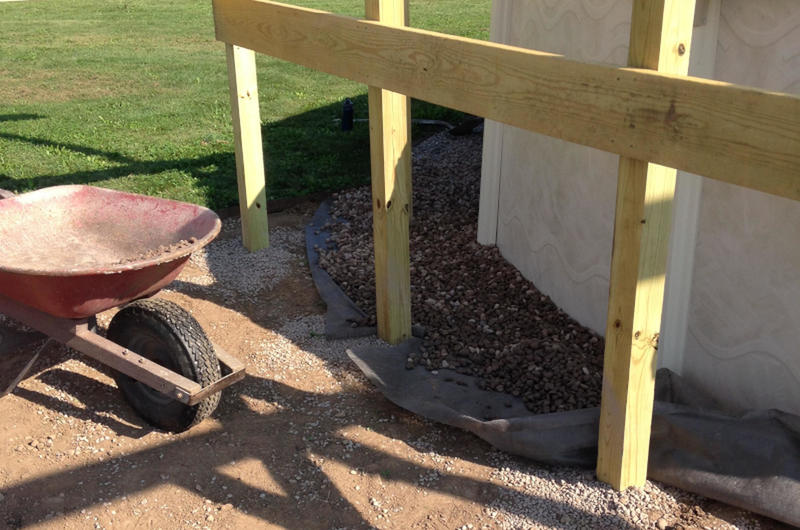 Doing your own construction, even small fixes around the house, can save you a ton of money.

For example, a plumber costs hundreds but replacing your own toilet pump can come in at under $50. Painting your own walls is another cheap project you can do on your own that gets big results. But there’s more to DIY than just saving money. It’s no secret that there’s a large amount of pride attached to accomplishing something yourself – especially when you get to gaze upon your creation every day.

Start with small things and slowly move to bigger endeavors. There is an enormous amount of information out there for free. With time, you could be building your own luxury deck – even your own pool!