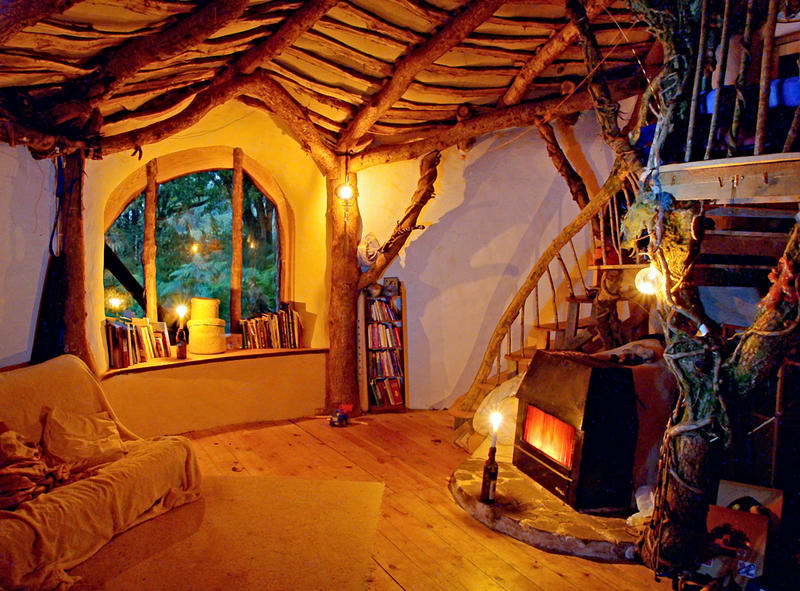 Some houses on sale in the world are downright weird. From the outside, they may seem like houses you’d hate to live in, but if you saw what they held inside you’d understand their prices. These houses have deceptive exteriors.

At the end of the day when you’re living in it you don’t have to look at the outside, right? 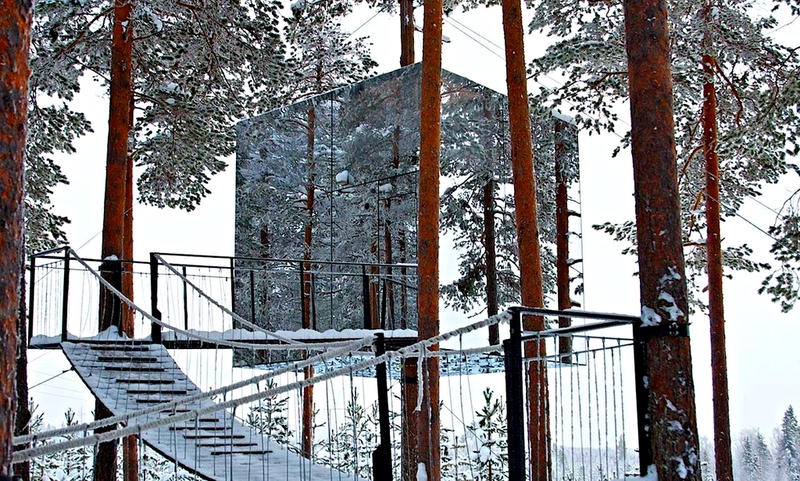 Here are some one-of-a-kind buildings built among the treetops in Sweden. The accommodation isn’t only weird but has different options for different tastes – like The UFO or The Bird’s Nest.

The weirdest room you can book by a mile is The Mirror Cube. You’ll remember staying here as it’s nearly invisible from the outside. Works wonders if you want some peace and quiet.

Inside The Mirror Cube 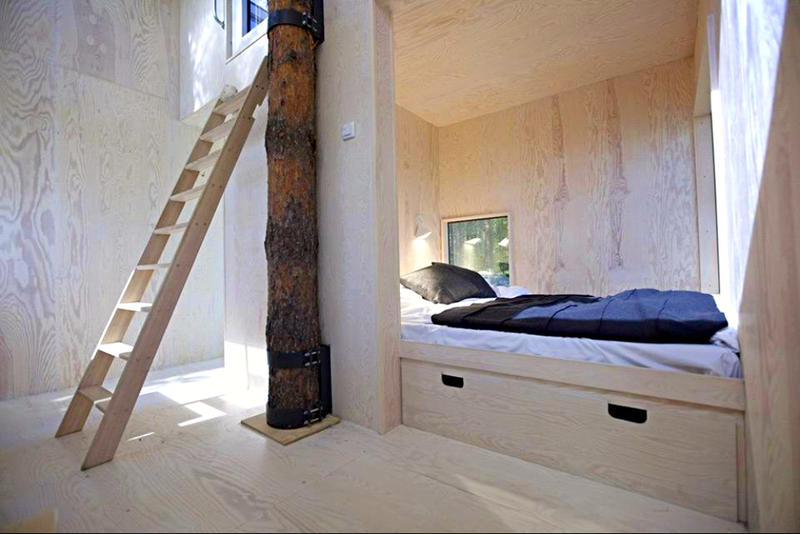 Once you get to the end of the rope bridge you’ll be inside the Cube. There’s a double bed, a bathroom, and even a terrace! Six windows give you a panoramic view of the breathtaking forest outside. The tree the room rest on goes straight through the cube.

And if you’ve had enough of the view there’s even free wifi. Now that’s something you wouldn’t expect staying in an isolated cube amongst the trees. 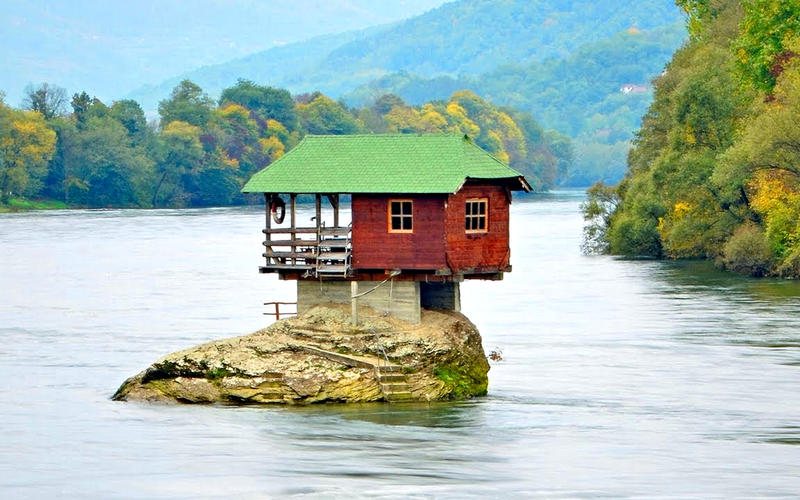 The Drina River House used to be nothing more than a safe haven for swimmers back in 1968 when they wanted a nice place to relax after going out for a swim.

The canopy gradually got built-upon until it became its own house. The outside is already a beautiful house for its environment, but the inside has one thing that rivals it.

The Riverhouse On The Inside 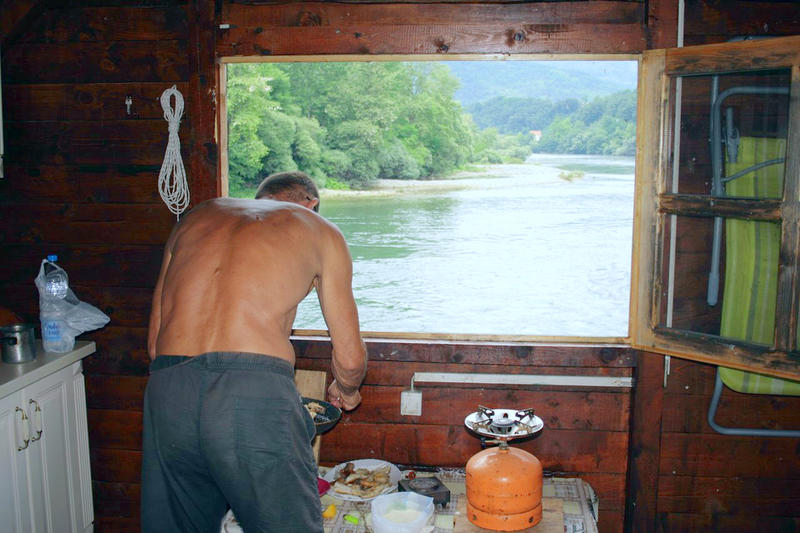 The small house has everything a person needs to live comfortably. The most glorious thing of all, however, is the view one will get when they decide to peer out the generous window. This house would make for an amazing place to stay on vacation.

The house has been rebuilt time and time again totaling seven times! The river hopefully won’t take this one down anytime soon. But if you are looking for something a little more secure, you’ll really like the next one on offer. 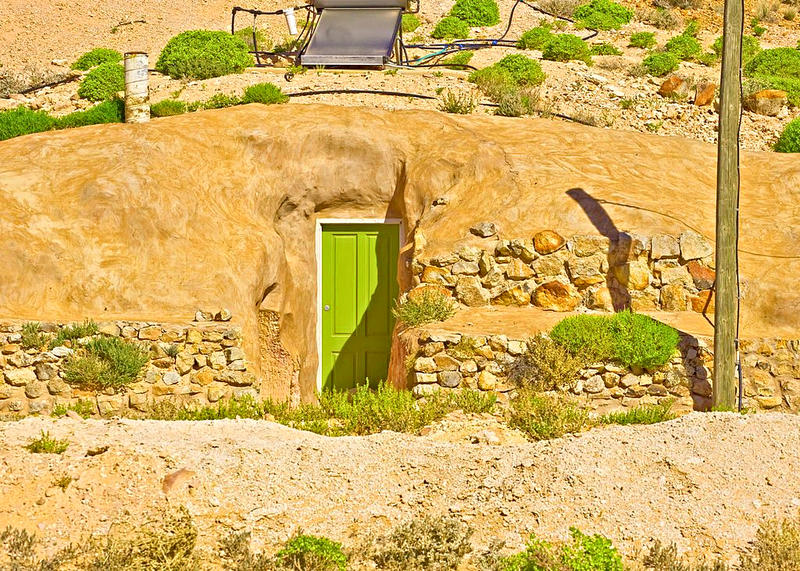 The desert may not be your first choice when it comes to living, the heat is certainly a turnoff. In the town of Coober Pedy the temperatures make even locals uncomfortable on a daily basis. That’s why some have decided to take to the ground where it’s cooler.

Mad Max 3 was shot in this area and has become a popular tourist destination in recent years. Which would surprise you if you looked at the town’s houses that are on the surface. 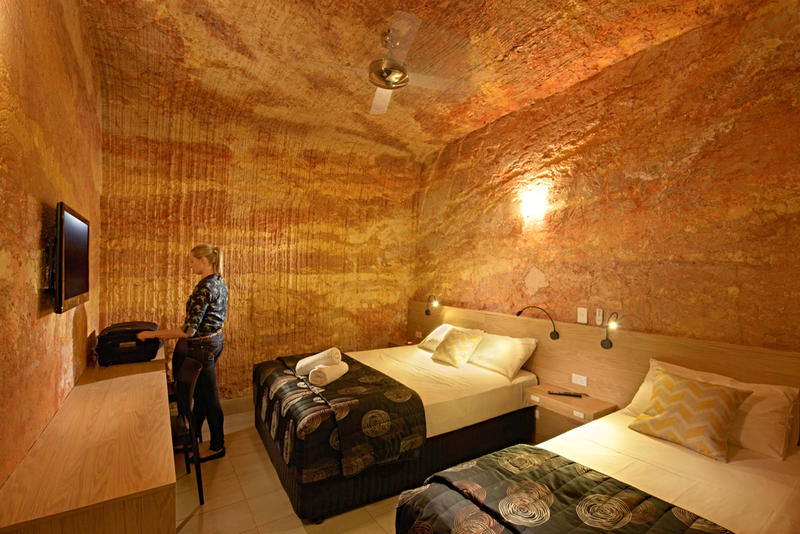 Once inside one of the underground properties that the Coober Pedy has to offer, you’ll find peace with these elegant interiors. The cool and easy-going accommodation is much like all the other underground places in the town, like the museums or the hotels.

Whoever made this particular one made it very spacious since it just takes effort with a shovel to expand the house. In fact, the cost of living underground is much cheaper than traditional housing on the surface. 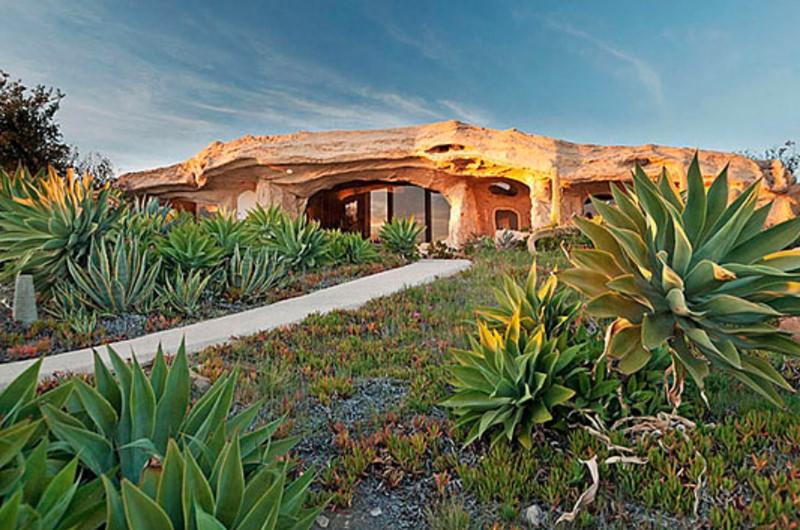 The Flintstones made living in the Stone Age look easy. Now someone’s been inspired by the cartoon and brought their way of living to life.

Dick Clark had a beautiful 2500-square-foot villa custom-built for him. The house is meant to appear subtle amongst the rocky region. The house in Malibu isn’t just gorgeous on the outside. The house even has a private beach with quite the view. The inside has ornate stone throughout and has a natural look bath and bedroom. The animal-patterned textiles really bring it together as a Flintstones house.

You’d think that the dinosaur garbage disposal, woolly mammoth vacuum and dishwasher would come standard with the way the house looks. The house is actually on the market and asking price is $2.5 million. Would you pay that to become a part of the Flintstones family? 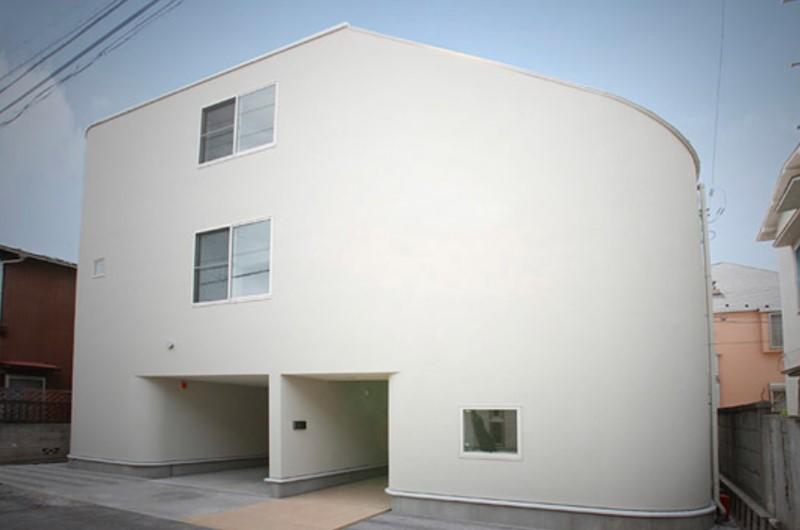 This stunning house is just 10 minutes outside of Nishiogikubo Station in Tokyo. The strange house tries to define modern living at its finest. Komada Architects are the ones behind this property.

The house may appear a little plain on the outside, its inside has something that your child will never get sick of. You’ll hear their joy endlessly.

Inside the SLIDE House 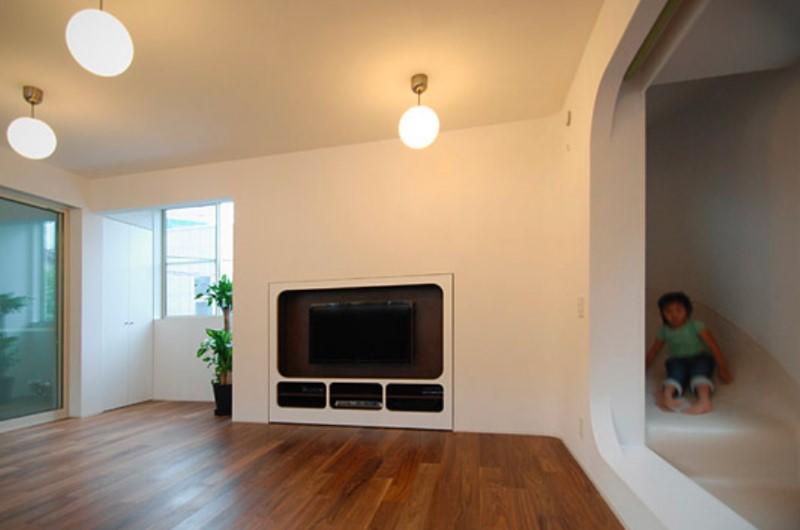 This three-story slide house in Japan has a regular staircase on one side of the house, and a slide on the other, which allows you to slide all the down to the first floor.

Consisting of 9 units built around a central courtyard, the structure gets its name from the way each unit is linked by a network of stairs which, in turn, creates slabs of slides throughout the exterior. Who said adults don’t want fun, too? The Keret House, inserted between two existing buildings, measures only from 92 to 152 centimeters in width.

Built between two existing structures from two historical epochs, the narrow infill seems like more of an art installation than a home. But inside, the semi-transparent, windowless structure doesn’t seem nearly as claustrophobic as one would think…

Inside The Keret House “That is why at first it seems that the construction of living space within such a premise is impossible. Keret House is to contradict that false image, simultaneously broadening the concept of impossible architecture”, says the architect Jakub Szczesny. Located in the Belgian village of Steenokkerzeel, this 30 meter (98.4 ft) water tower was originally built between 1938 and 1941. It was in service until the 1990s and was even used as a watchtower by the Nazis when they took over Belgium in World War II.

In 2007, Bham Design Studio set forth to completely renovate and convert the former water tower, known simply as Chateau d’eau, into a single-family home. Now, its interior is breathtaking.

Inside The Water Tower House The overall design is minimal and many of the original elements such as the main water conduct, concrete ceilings and stairs, and the giant 250,000-liter water basin were kept to preserve the strong identity of the building.

While the space serves as a private residence for the owners (a couple), they also rent part of the building out for exclusive events once or twice a month. Simon and Jasmine Dales were fed up with paying a hefty mortgage every month, so with a mere $4,000 decided to build their own eco-friendly house.

In a few short months, Simon – who had no previous experience in architecture or carpentry – built a home that wouldn’t look out of place in a ‘Lord Of The Rings’ movie. Inside and out.

Inside The Hobbit House The spacious home was excavated from a large Welsh hill, so the couple got a lot of real estate for their money.

Unfortunately, the house fell victim to a fire on New Year’s Day 2018 and the couple decided to put the site up for sale rather than rebuild. And they’re not the only eco-friendly builders whose beautiful home was at serious risk. Catherine King and Wayne Adams spent more than $1 million on their floating paradise – and they did it all with the most basic of tools.

Wayne is not a fan of power tools and instead decided to do the bulk of the labor with a good old hammer and saw – even securing the platforms to the cove bed to protect it against storms – so they can stay nice and cozy inside.

Inside The Floating Home The unique British Colombia home features several different platforms and rooms including an art gallery, dance floor, and lighthouse that doubles as a shower – all built with Wayne’s own two hands.

Catherine and Wayne recycle, grow their own food, drink from waterfalls, and produce electricity from solar panels. And it seems floating homes are popular across the pond too. Since the mid-80s, Hamish McKenzie has been rooting around for spare parts to build out his collection of houseboats – earning the row of moored dwellings the nickname “the wackiest street in Britain.”

There are old buses, rockets, and planes all melded into the boats that have grown crazier over the years. One of them is even up for sale for £325,000; the listing recommends interested parties come and view the inside to get the full experience. The property boasts a microwave mailbox and windows made of tractor wheels. You can actually rent it out on AirBNB if you’re not ready to sign a mortgage for it. There’s even a quiz sheet for guests to find all the strange things it’s made of.

Now you’ve seen the interiors, are you ready to make an offer on any of these peculiar homes?