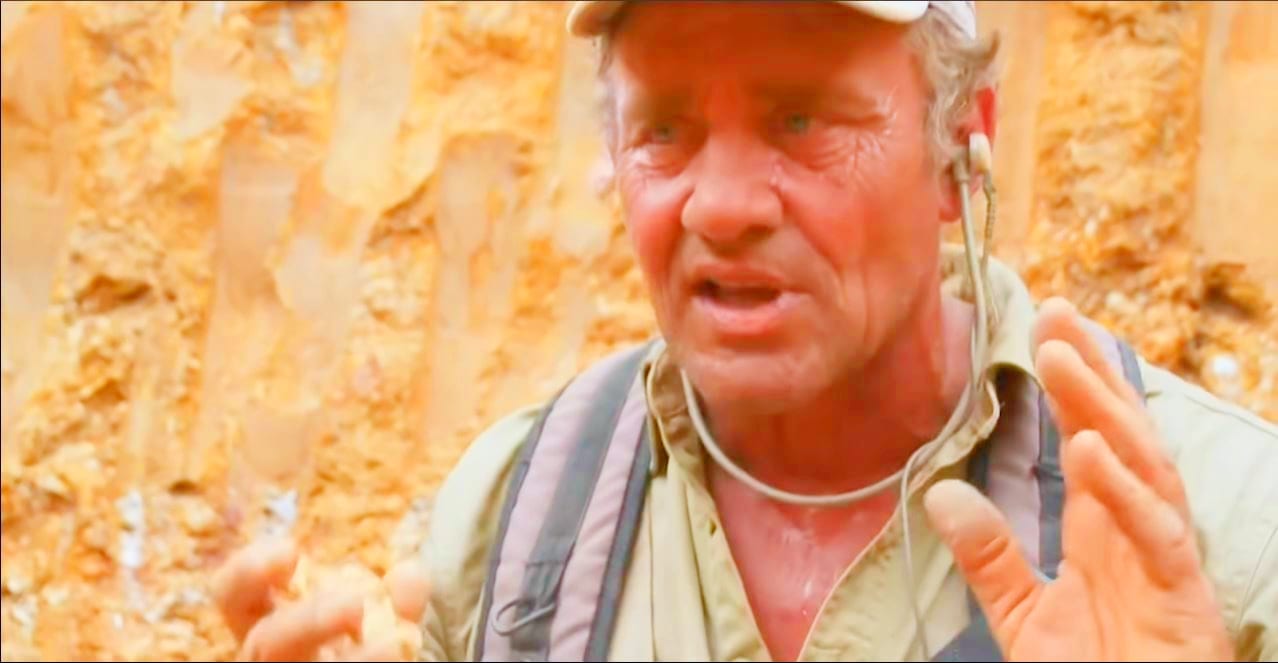 The days of the gold rush are long gone. In fact, you’re probably better off buying a lottery ticket if you want to strike it rich these days.

But if you do happen to be walking in the desert and see a stone made of lightning, or a rock that NASA could use to understand the origins of the universe, you might want to take a closer look – it might be worth millions. 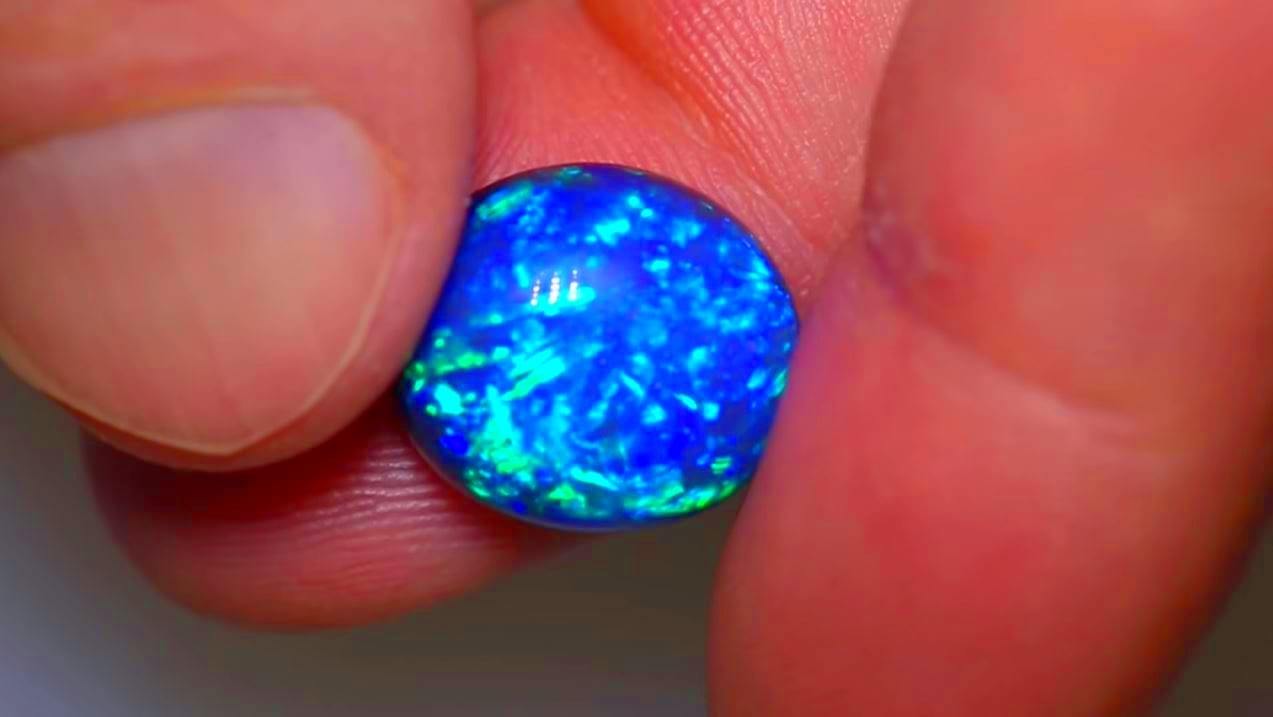 The Fire of Australia was discovered in the small desert town of Coober Pedy in South Africa and was sold for a whopping $500,000.

Walter Bartram, who discovered the 5,000-carat gem, could have got closer to $1 million for it, but decided not to sell it to dealers and gave it to a museum instead so it wouldn’t be cut up. But that’s nothing compared to the valuable stones other people have found. 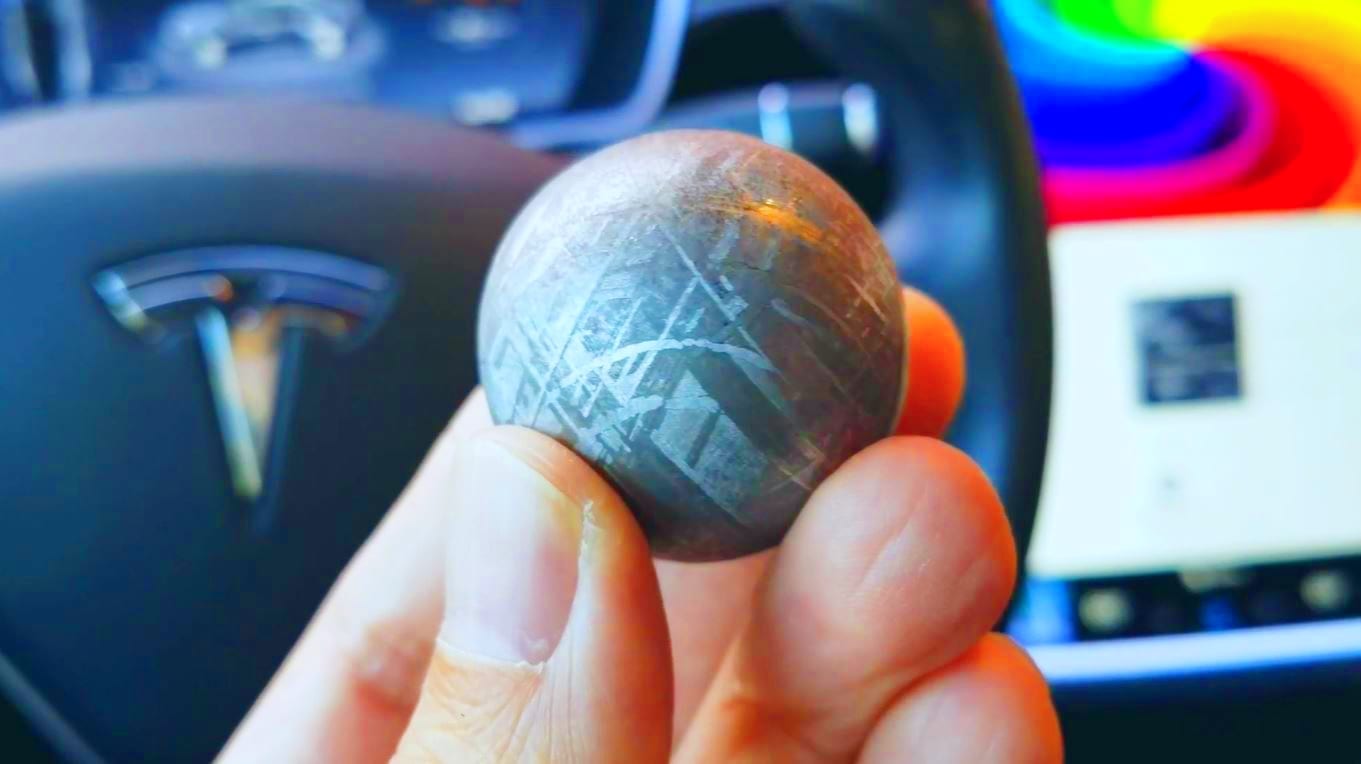 The Gibeon Meteorite struck Earth during prehistoric times. It had been used by natives to make tools before its larger parts were collected and valued at $383,806. Meteorites can give scientists clues about the origins of the universe. NASA recently discovered sugars on the surface of meteorites that suggest they played a part in the creation of life on Earth.

A big win for science, but imagine how you’d feel if you found something you could actually sell. 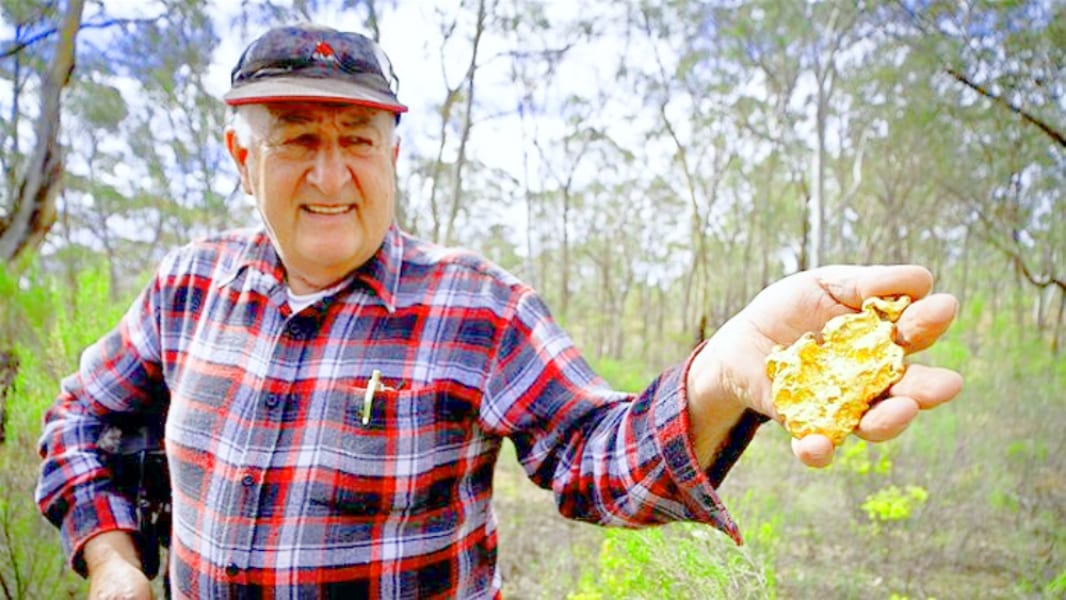 Australian Mark Day fondly remembers a customer’s emotional reaction after valuing a chunk of gold he found during a spot of prospecting. “He was shaking like a leaf; he didn’t know what to do with it,” Mark said, adding that the customer couldn’t sleep before he came in that day.

The two-kilogram nugget was worth about $130,000. Not quite as big of a haul as some, but at least it didn’t land on his house. 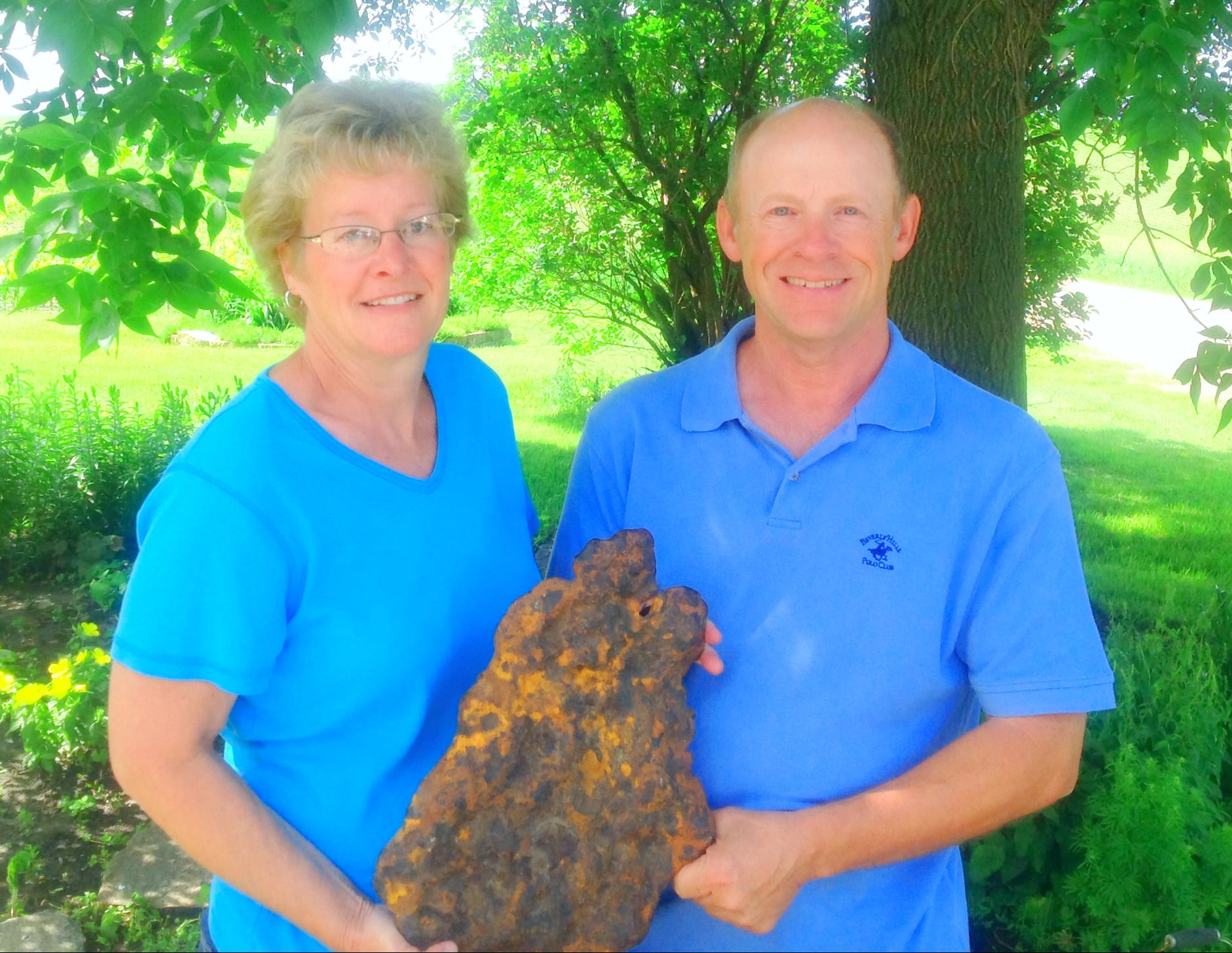 Bruce Lillenthal noticed something strange sticking out of the ground near his farm property in Arlington, Minnesota. Wondering if it might be something valuable like gold, he went to get it checked out. “It looks kind of like a burnt pizza,” commented Bruce’s wife Nelva. But they never dreamed it was a billion-year-old rare meteorite.

When specialist Calvin Alexander got the call from Bruce, he initially thought it was just another waste of his time – what he called a “meteor-wrong.” After seeing what it was, they were happy to take it off their hands. And at least they didn’t try to quarantine the couple. 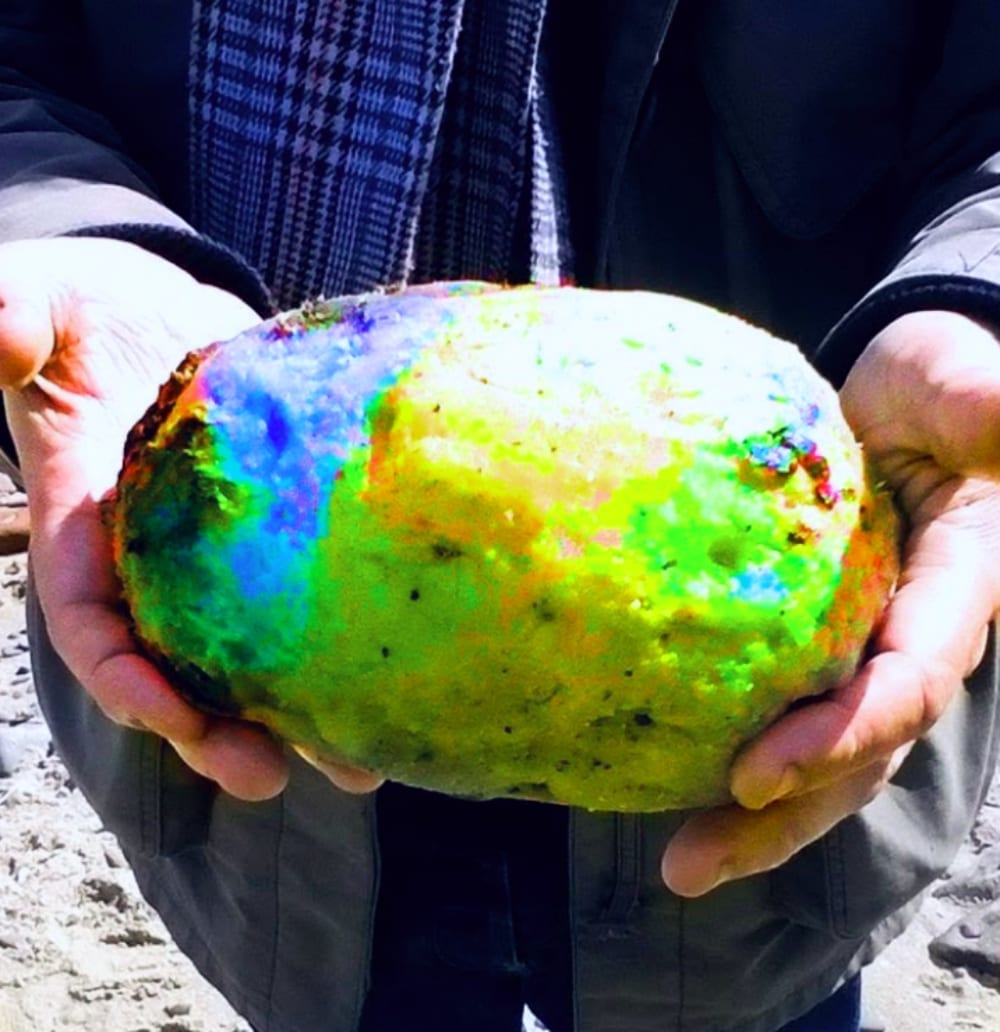 One British man was convinced he’d found a meteorite on the beach and quickly brought it home to show his wife. A few quick tests and a call to a local science association proved it wasn’t a rock at all, but he didn’t expect men in hazmat suits to turn up at his house.

After the experts confirmed it was nothing to worry about, the man was disappointed to find out it was just a lump of whale vomit. Then they told him how much it was worth.

Catch Of The Day 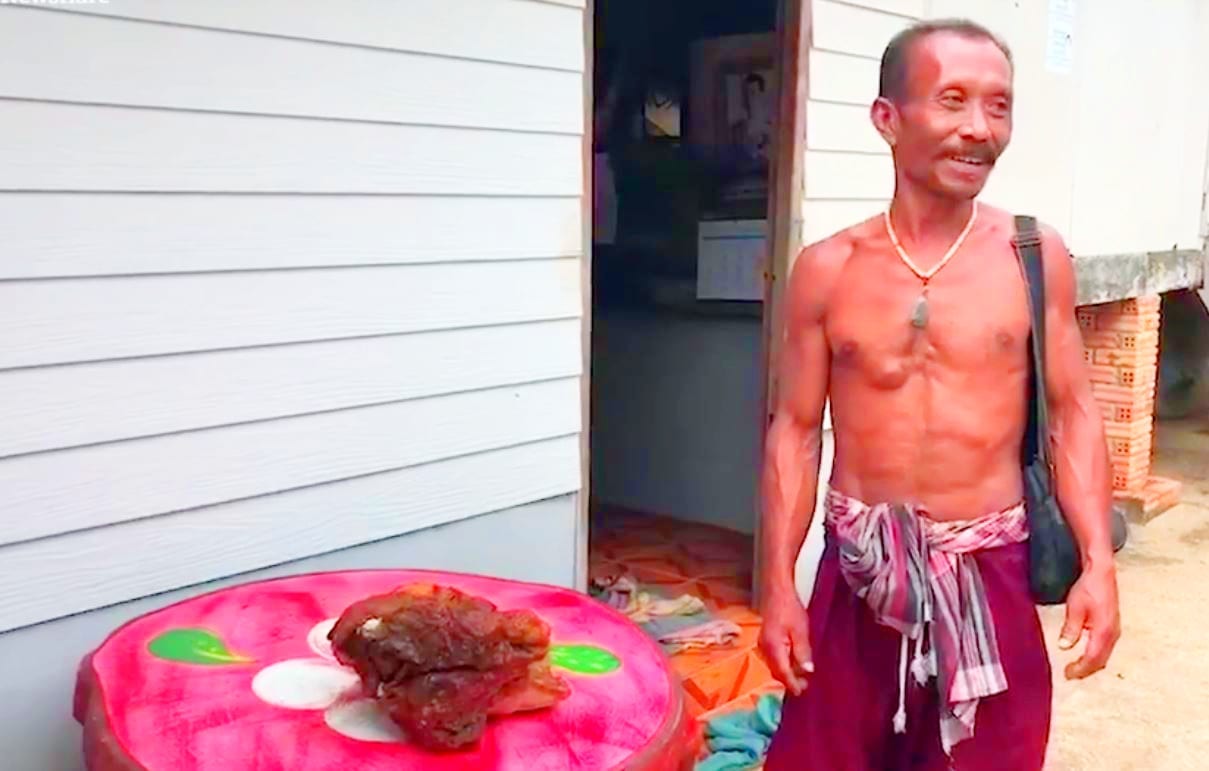 Jumrus Thiachot tells a similar story. The fisherman was contemplating his financial woes as he walked along the beach in southern Thailand when he came across an unusual stone and decided to store it in his shed. But when he finally got round to having it valued, Jumrus discovered it was a chunk of ambergris, a waxy substance produced in the bile duct of a sperm whale (in a word: puke).

The piece was worth more than $300,000 – when dried out it’s used to make expensive perfume – which was enough to hang up his fishing rod for good. And Jumrus isn’t the only story of a rags-to-riches find. 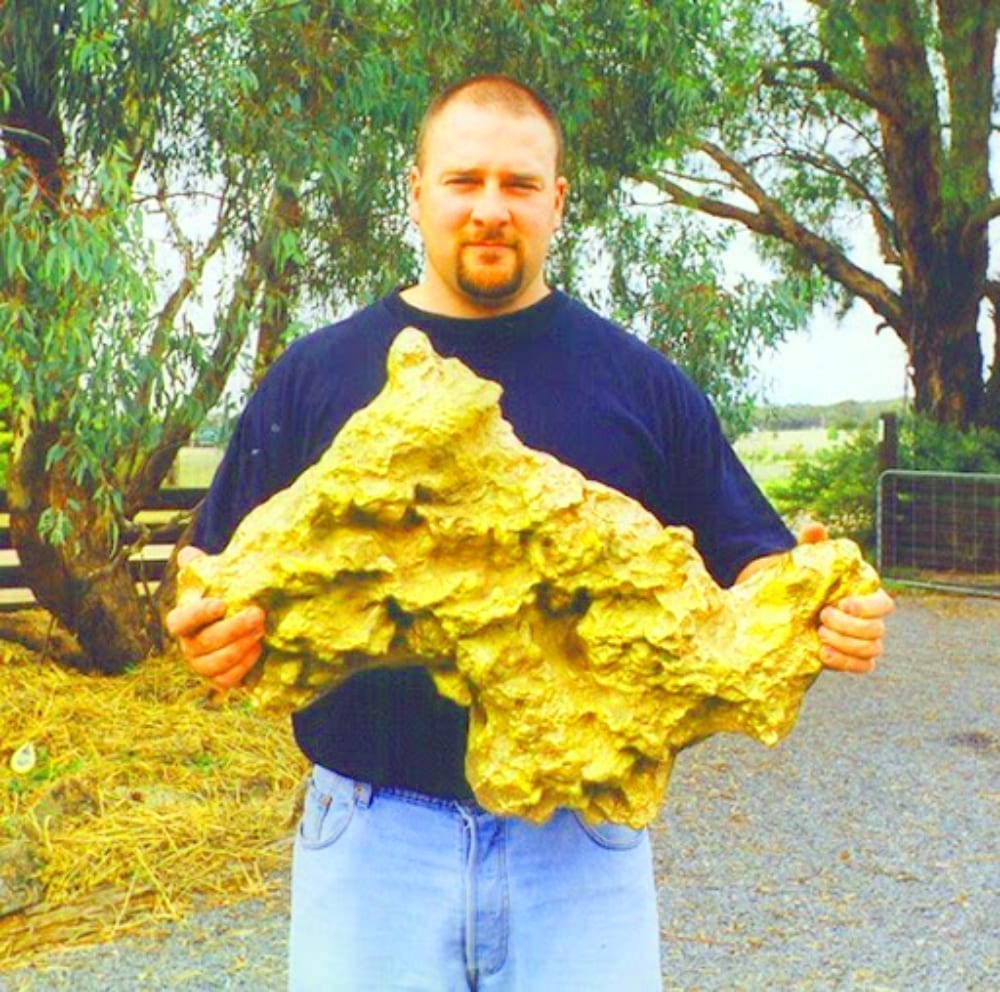 After buying a cheap metal detector from Radio Shack in 1989, one ambitious treasure hunter took to the Sonora Desert in search of his fortune.

The result? After carefully scanning the area of desert that set off his new toy, the man discovered what would later become known as The Boot of Cortez, a 389-troy-ounce hunk of gold worth $1.5 million. And if you thought that was lucky, imagine finding a rock forged by a bolt of lighting. 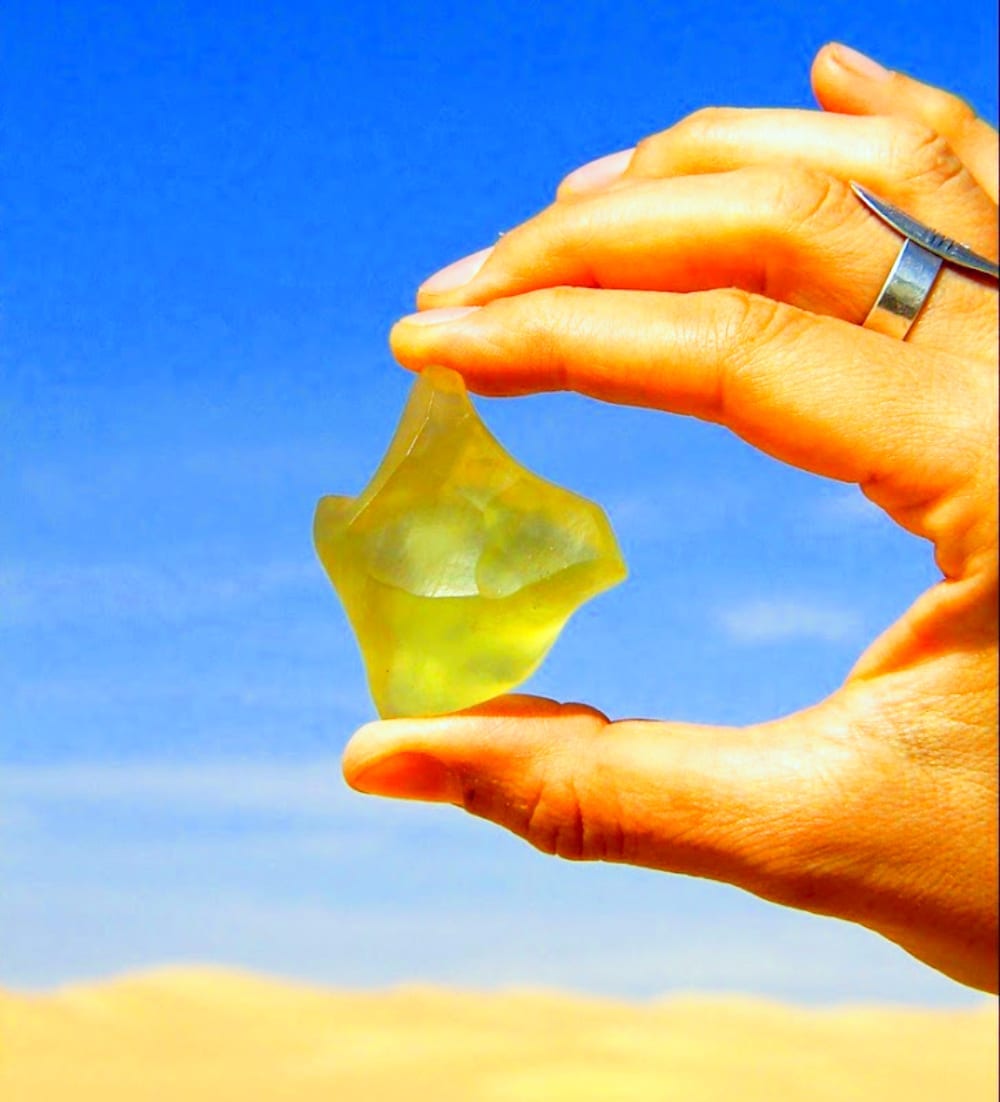 If you’re lucky enough to come across a lump of Libyan Glass like the one pictured, you could be walking away with a cool $110,000. But the most incredible thing about them is not how much they’re worth, but where they came from.

Precious stones are rare. Getting struck by lightning is rare. But a rare stone created by lightning? Forget it, you won’t find that in a million years. Unless you happen to be rummaging around in Egyptian tombs, that is.

Lightning in A Bottle 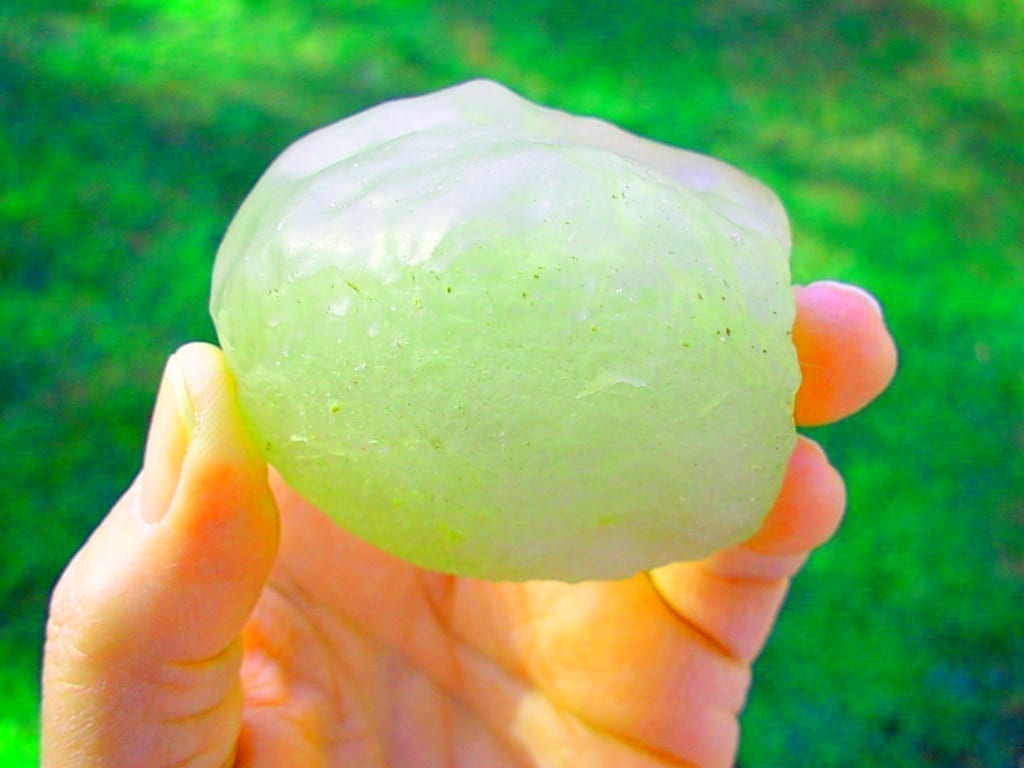 The glass-like stones are believed to be created by lightning striking the desert sand, while others are convinced they come from outer space. Treasure experts first discovered Libyan Glass more than 3,000 years ago when it was recovered from Tutankhamun’s burial chamber. The Egyptian pharaoh’s gold and jewel-encrusted breastplate feature a scarab beetle carved from the rare gem.

So if you want a piece of Libyan Glass, you’d really need to know where to look, just like this Aussie fortune hunter. 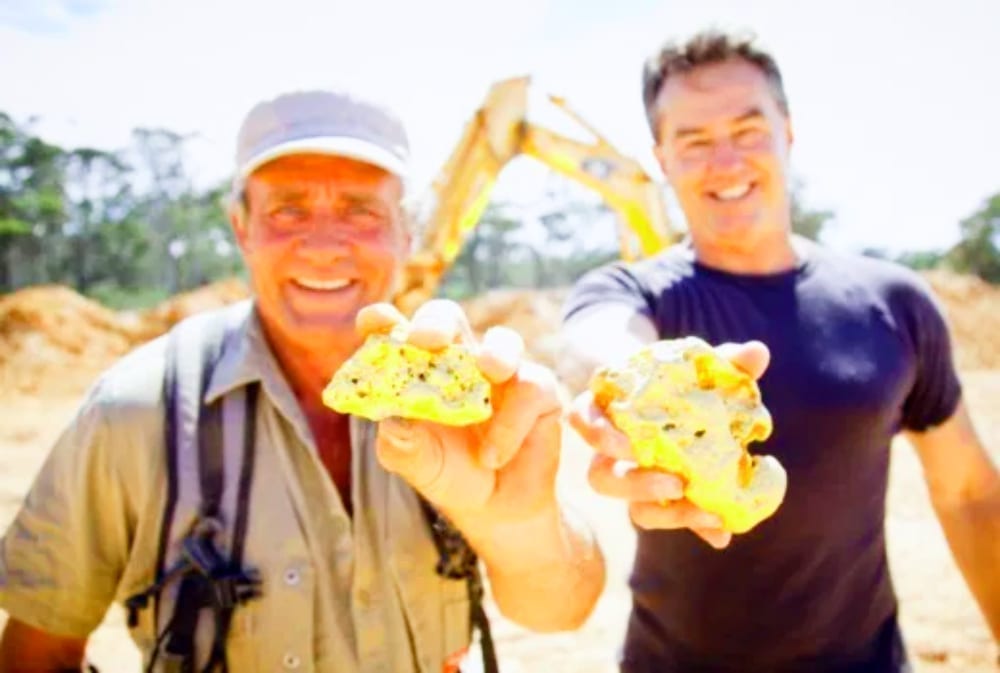 Australian gold digger Neville Clark didn’t exactly stumble across these gold nuggets – he’d dedicated his whole life to hunting down precious metals. After hacking at an area his metal detector had flagged up, he discovered a small flake worth about $250.

But as they investigated further, the device started “screaming”. He ended up with $137,000 worth of gold, which is just pocket money compared to what one Brazillian man found. 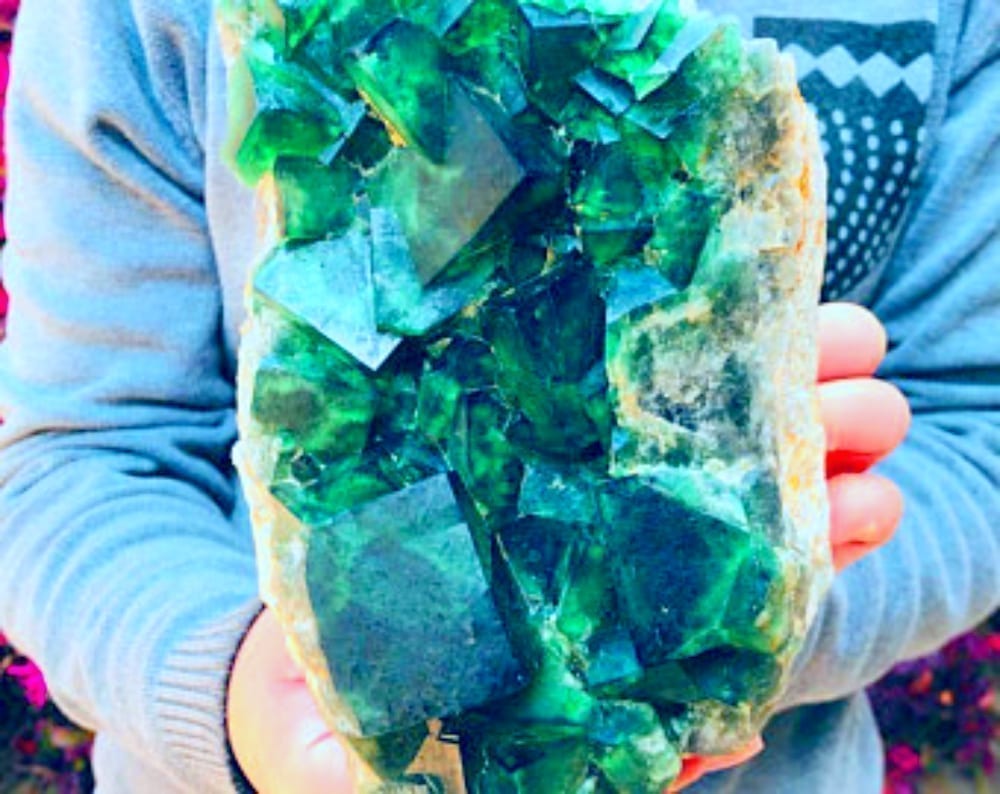 Determined to find a valuable stone, a 50-year-old father from Brazil – who has gone to great lengths to conceal his identity – excavated deep into the Carnaiba mine in Bahia. The area was known for its emeralds, and this adventurer followed the yellow brick road all the way to the jackpot. A long way down into the intricate tunnel system, he discovered a four-foot-tall stone.

It took 10 men to pull it up, but it was worth it. The stone was worth an eye-watering $319 million. And it turns out there might be something to look out for to alert you about rocks like this. 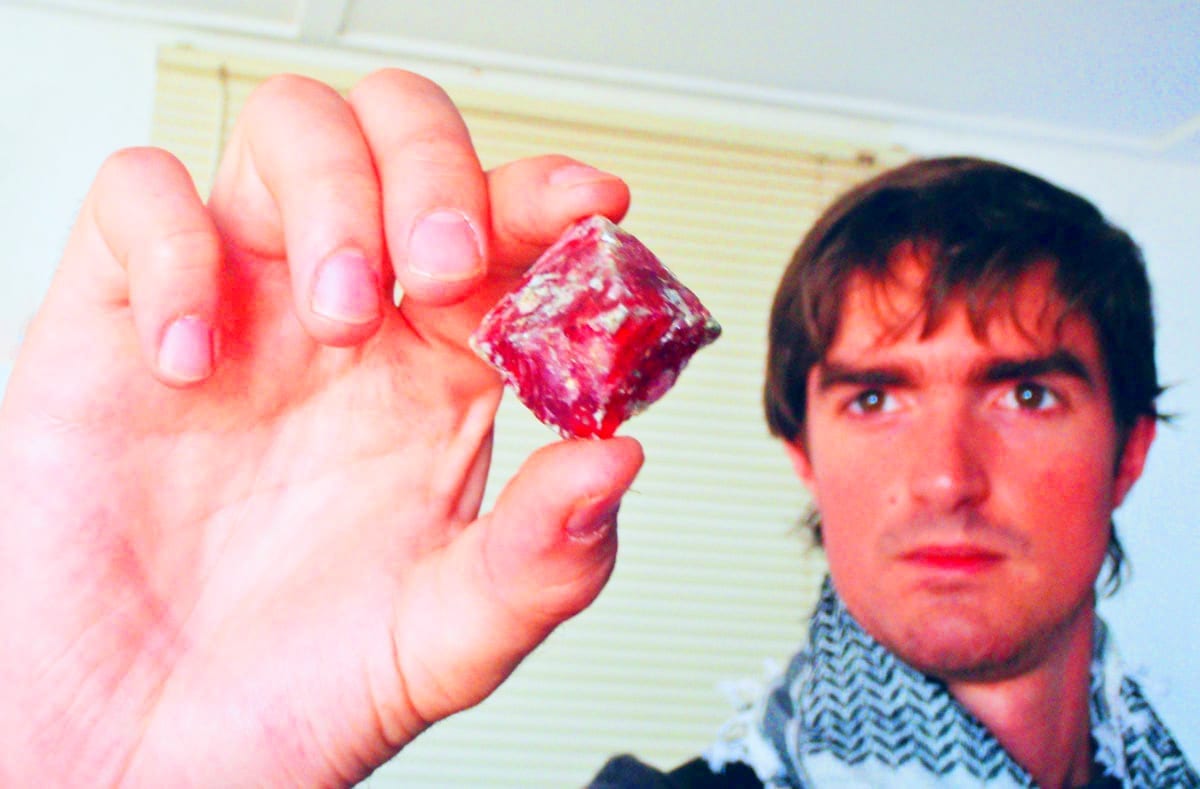 Jarvis Wayne Messer, of Asheville, North Carolina, knew he was onto something when he saw a sign flying above him. “There was a red-tailed hawk that soared right over me,” Messer said. “I knew it was something special, but I didn’t realize how important the stones would be.”

The treasure hunter had found four rare star rubies, weighing in at 342 carats. They are considered to be the finest collection of rubies in the world and are worth around $100 million. Is there a stone in your back yard you should probably get checked out?