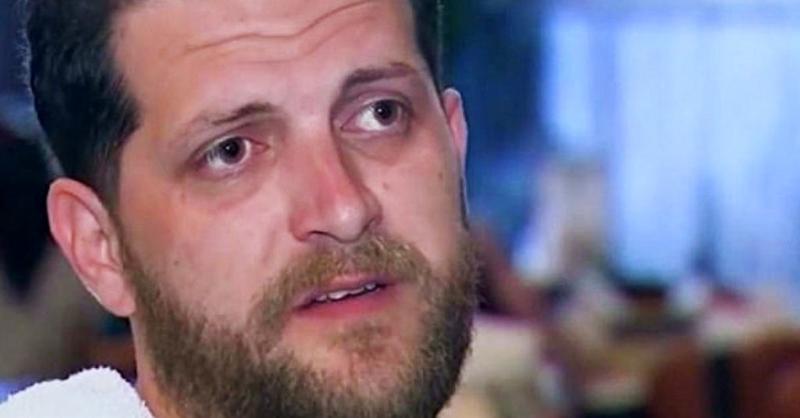 As he approached the table he had been serving he noticed that she wasn’t there anymore. She must have snuck out while he wasn’t looking.

He really hoped that she wasn’t one of those clients. He checked the bill to make sure she had paid which she had, but the unexpected find was the note that she had written for him.

It turns out that she never left him a tip, it was instead words taken from a conversation that they had had before she left.

He felt hard done by as he cleaned her table to get it ready for the next patron. But then he noticed something else that he hadn’t paid attention to before, he knew this was karma.

Life Of A Server

Armando Markaj worked in Harlem, New York City as a waiter at Patsy’s Pizzeria. His day was just like any other until something happened.

He knew that his work would pay off after he got through medical school. He worked hard long hours and did all of it with a grin. But sometimes it was hard.

He had no idea that the next woman to walk through the doors would put his patience to the test.

Patsy’s Pizzeria has a lot of customers on a Saturday and Armando was ready for the busy shift. The restaurant had the iconic pizza that always kept patrons coming back. 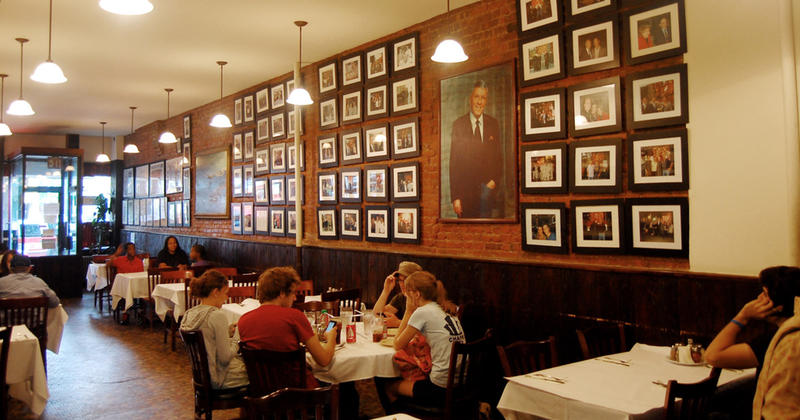 To add to the bad luck, one ill-intentioned woman walk arrive with her daughter looking to start with him on this chaotic day.

Armando now knew that he had to tackle a lot of responsibility and that it would have many implications and a long legacy.

Frank Brinja was the owner of Patsy’s and took a lot of pride in his restaurant that originally opened back in 1933.

The establishment had its fair share of famous patrons throughout the years – 86 years to be exact. 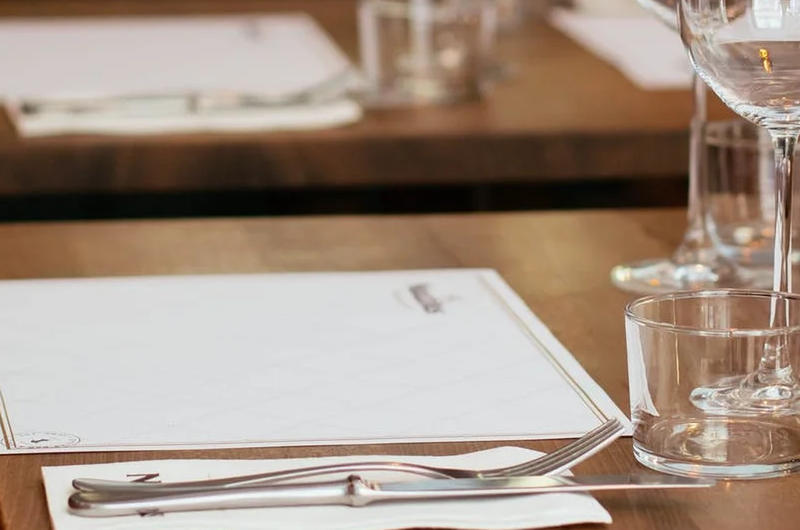 The two women that sat down peered up at the wall with scrutiny. They seemed impatient for him to get to their table even though they had been waiting for less than a minute.

As soon as he looked at them he knew that this would be a difficult table to serve. But he had no idea how it would end.

He still smiled and gave them the warmest greeting. They decided to get two of the New York Special.

Just as he thought it was over the old woman called out for him and asked something that he would remember for the rest of his life. 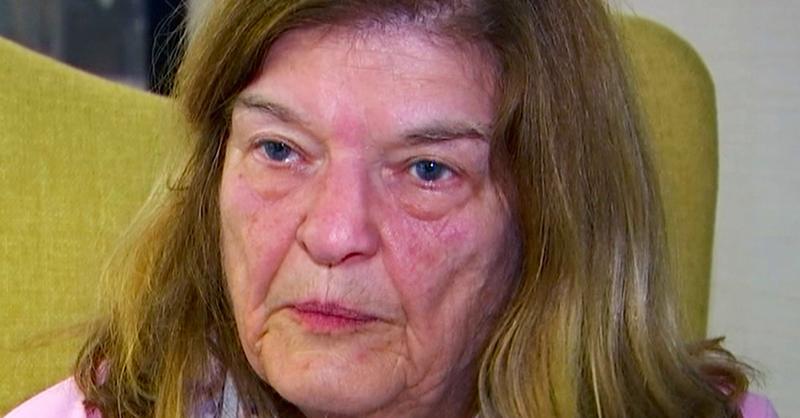 Armando, unprepared for the confrontation, was left at a loss for words.

“Why are there so few pictures of women on the wall?” she asked, with venom dripping from every word. Armando opened his mouth to speak, but no words came out. Was she joking?

Waiting For An Answer 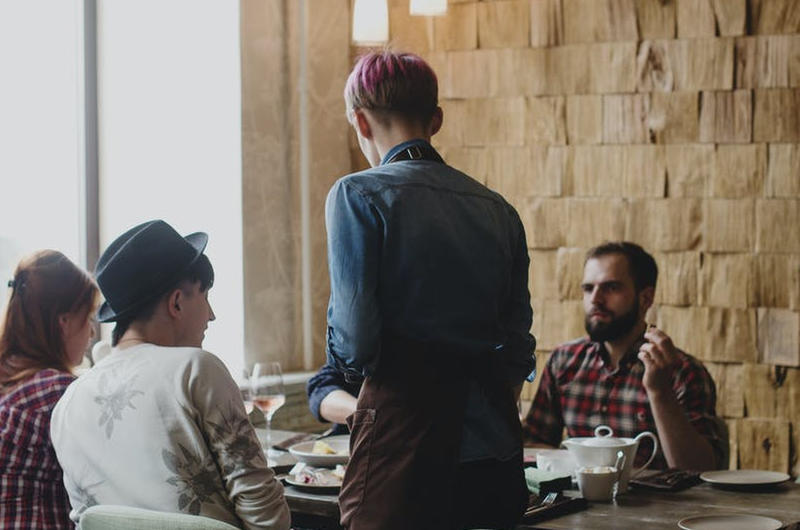 She waited expectantly, and then it dawned on him that this woman’s question had been completely facetious.

And she expected an answer. Armando laughed nervously and foolishly tried to make a joke, but found it completely backfired the moment it came out of his mouth. 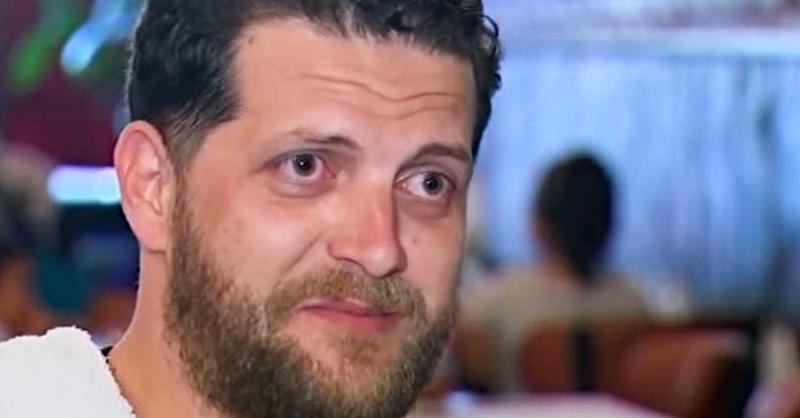 “Maybe woman don’t eat a lot of pizza…?” he stammered, trying to laugh it off.

The woman’s eyes narrowed, and her mouth turned downward into a mean sneer. She had made up her mind, and now Armando was going to pay for answering her question so flippantly.

The Good And The Bad 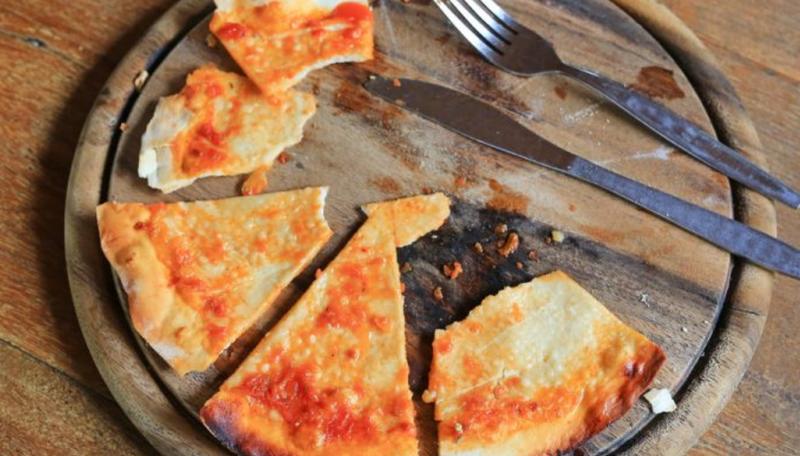 The flustered server retreated to place the pair’s order and tried not to dwell on the mean-spirited woman — after all, there were other tables that urgently needed his attention.

Whatever confrontation was coming would have to wait … at least for a few minutes – which ended up being a lull that would set the entire string of strange events in motion. Armando resolved to always try his best to give all his customers equally good service. His livelihood depended on tips – he just prayed that there wouldn’t be any more trouble today.

But by the end of his shift, he would find himself presented with a golden opportunity to flip the situation on its head. 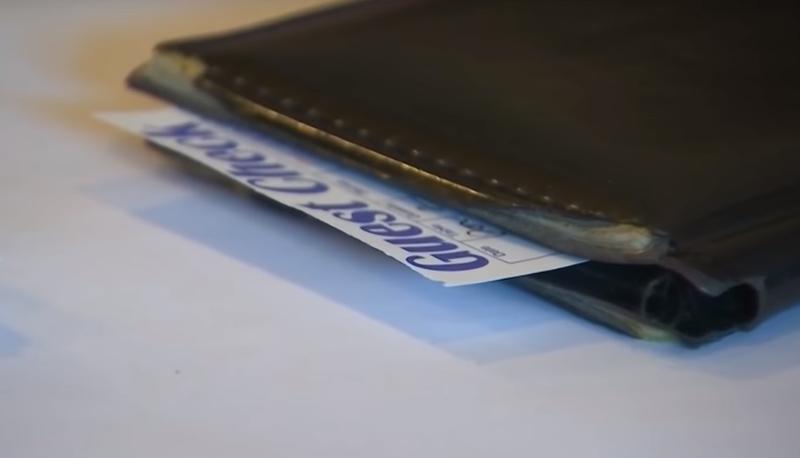 After Armando had brought the two women’s steaming pizza slices to the table, he quickly moved on to the next customers who were demanding his attention.

When they asked for the check, he was sure to deliver it promptly, but the restaurant was getting fuller by the minute. The two women also seemed to be getting more irritable. What were they expecting? Rushing back to collect the check after attending to another large table’s orders, he was surprised to find it empty.

He only prayed that the women hadn’t left without paying. But when he looked inside, the note he found was far more hurtful.

“Maybe women don’t tip either,” was obnoxiously handwritten on the receipt.

Armando could barely believe his eyes. With a heavy heart, he started to clear the plates when he noticed a white envelope underneath the napkins. 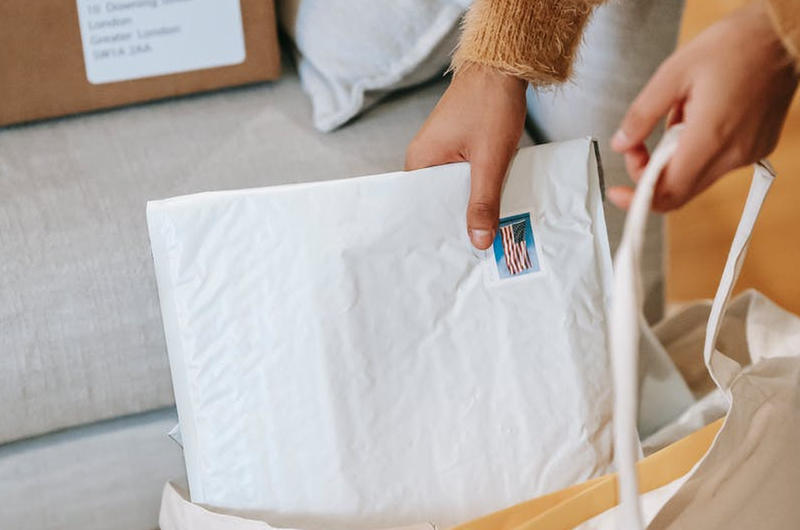 Curious, he opened it up and peeked inside.

When he saw the ‘Citibank’ logo appear, he didn’t stop to think. He ran out the door to chase her down. Rude or not, this wasn’t something to brush off and walk away from. “I just pulled up the flap and I saw ‘Citibank’ and thought it was important, so I ran out to the street to look for her, but she was gone,” Armando recalled.

With the woman nowhere in sight, he opened the envelope to investigate further. Inside was a check for the largest amount Armando had ever laid eyes on. 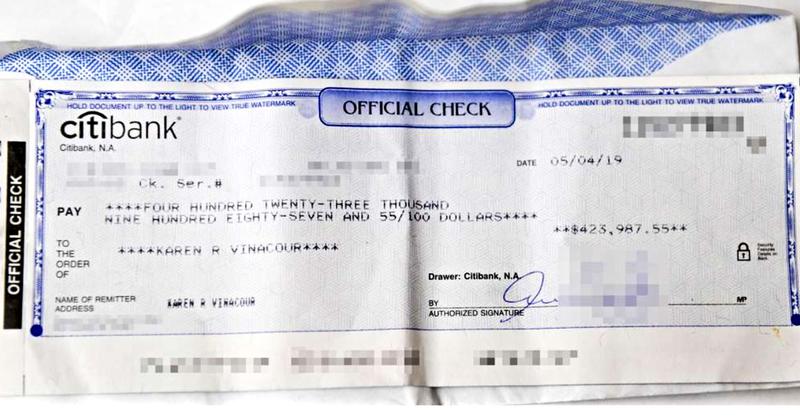 The check that the rude woman had left behind on the table was for a staggering $424,000.

Armando had a very big decision to make. If he wanted to, he could teach her a powerful lesson. He weighed his options carefully. On the one hand, he had the option to just throw the check away — no-one would be the wiser.

He could do it in the name of karma. Or he could attempt to cash it, and his money troubles would be over. On the other hand, either decision would make him just as mean-spirited as the woman who had ruined his day. What would you do? After thinking carefully about his moral dilemma, Armando did what most of us would have done.

He called Frank Brinja, owner of Patsy’s, and put the check’s fate in his hands. “He called me immediately and hands me this check and I was like, ‘Oh my…’ I didn’t want to put it in my pocket it was so much money,” Frank explains.

“We thought for sure it was a billionaire or something who came in here, because who walks around with a check like that?” “Normally we just put things left behind in the lost and found box in the back, but I wasn’t going to do that with almost half a million dollars,” Armando explained.

Frank tried to track down the woman, whose name on the check was Karen Vincour, but didn’t have any luck. He then decided to wait to see if she would retrace her steps and come back.

“We decided we would hold on to the check for a couple of days to see if she would drop by or if we could find her ourselves,” he said. Meanwhile, 79-year-old Karen Vincour was in a frenzy.

Realizing that she’d lost her check, she frantically called her daughter, who proceeded to search through the household trash.

When that didn’t work, they tore apart every place in the house it could have been. Then, Karen began to retrace her steps. 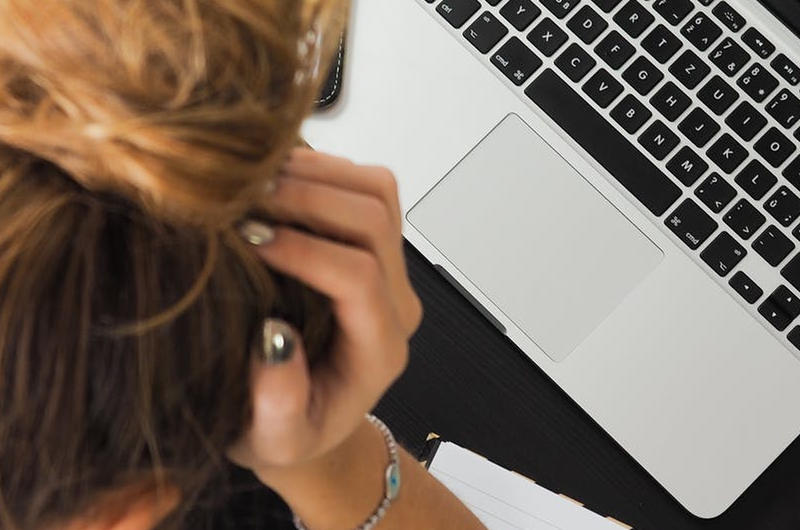 First, she called the café across the street from Patsy’s where she had stopped for a coffee earlier that morning, then she decided to call the pizzeria, but was met with confusion.

“She said she had called Patsy’s and nobody knew anything about a check,” Vinacour’s real estate broker said in an interview. “I didn’t stop to think that maybe she called the wrong one.” It turned out that the check for $424,000 was Karen’s life’s savings. She’d just sold her apartment, and the amount was the proceeds that she planned to use as a down payment on a new home.

Her world felt like it was collapsing around her. And when she called the bank to cancel the check, she got some devastating news.

Out Of Their Hands “They said they couldn’t immediately cancel it because it was a cashier’s check. I would have to wait at least three months before they could even start the process, and only if someone didn’t cash it in the meantime,” Karen explained.

Without that check, Karen wouldn’t have a home. She had been staying with friends, sleeping on a different couch each night. When Karen hadn’t shown up at Patsy’s to reclaim her check, Frank decided it was time to enlist professional help. He called a local newspaper, and they were able to track her down within minutes.

Just under half an hour later, Karen arrived at the pizzeria. And Armando was waiting to greet her at the door. But did she feel sorry that she had stiffed him so rudely? “She was so happy and she was in tears,” says Frank. “But, the second she saw Armando, you could see she got a little shy.” She must have felt like a fool.

At least she had the sense to undo some of her wrongdoing by offering the hardworking server a finder’s fee and apologized profusely for being so nasty. But Armando’s reaction surprised everyone. “I’m happy for her, really,” he confessed. “Saturdays are pretty busy and I was very close to taking everything left on the table and throwing it out when I saw an envelope.” Karen and Armando made up over some hot pizza, and then Frank showed her the photograph wall to prove a point. He took her over and pointed out all the women’s faces that she had missed that Saturday, including TV host Barbara Walters, First Lady Chirlane McCray and former City Council Speakers Christine Quinn and Melissa Mark-Viverito.

Then, to drive the point home, he offered to do something else, too. “We joked with her and said we’d add her picture up on the wall,” he said, laughing. But do you think Karen will think twice about leaving a nasty note for her server in future?