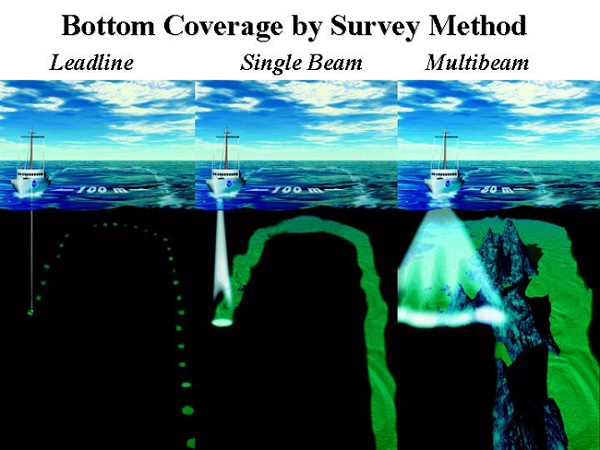 In case you are not familiar with what hydrographic surveying is, let us begin with a definition given by the Hydrographic Dictionary (1966, The International Hydrographic Bureau):

Hydrography is “that Branch of applied science which deals with the measurement and description of the physical features of the navigable portion of the Earth’s surface and adjoining coastal areas, with special reference to their use for the purpose of navigation”

Put in simpler words, it is the science that explores the seabed.

Believe it or not, hydrography goes way back to the 2nd century AD and the Mediterranean merchants. Also, the history remembers West European countries which, in the 15 century, became powerful maritime forces and therefore, seabed explorations and drawing coastal maps ensured safer sailing.

In order to get a clear picture about the sea bed, the explorer, ship captains and sailors used what was at hand. Therefore, they would drag anchors and weighted lines to measure the depth and seabed variations.

Certainly, with the progress in technology, came new methods. 20th century brought the ‘wire drag’. Finally, in 1930s came echo sounders and pushed all the previous methods in history.

The modern technique for hydrographic survey relies equally on both hardware and software. In low water regions, LIDAR might be employed. LIDAR stands for Light Detection and Ranging. The apparatus can be installed on hot balloon-craft, for instance, small craft, Zodiacs, UUVs or AUVs and can comprise side scan, multibeam and single beam equipment. In the past, separate data gathering methods and standards were employed keeping in mind the marine safety.

But as the technology grew up and we entered the age of computers, the reference level was set to one fixed standard. Once the data is gathered, it goes under post processing. A huge quantity of information is collected throughout the course of survey, per sq foot. But all that is eventually required is a tabulated navigation chart, topography and bathymetry. This requires thinning of data and rectifying the errors that may have occurred. The final data output and the charts are typically formulated using AutoCad.

The Use of Sonar

Obviously, the crucial device for hydrographic surveying is the Sound Navigation and Ranging a.k.a. the SONAR – the multibeam and sidescan sonar. It estimates the depth of water by making use of the sound waves to detect an object inside the sea.

The device emits fan-shaped or conical pulses in a direction downwards across a broad angle. The strength of the sound reflections from the floor of this conical beam is recorded, creating a ‘sliced’ series of tracks. These slices, when attached together all along the course of motion, form a picture of the seafloor within the confinements of the beam. 100-500 kHz is the usual range of sound frequency employed in side scan sonar, however higher numbers give up superior resolution. Usually darker regions indicate loud echoes and vice versa. In a nutshell, the louder you shout in a public place, the more you get noticed. Here, side scan sonar is the public and you are that object in the sea.

On the other hand, Multibeam sonar, or a swathe, is a sound receiving and transmitting device which is typically used in surveys to decide the nature of the seabed and depth of water. The working principle is almost the same as single beam sonar, however in this case the system transmits a wide fan-shaped pulse from a transducer through the across-track with a slim along-track. The receiving beams are much narrower in the across-track. Using the bottom detection algorithm, mutual travel time of audio pulse is established from the narrow beams. Given that the speed of sound in water is known, the position and depth of the comeback signal can be calculated using the mutual travel time and the receiving angle. It’s all basic trigonometry, once we get hold of the device.

And so that, in a nutshell, is how we know what the ocean floor looks like.  Technology has provided us with higher and better resolutions over the years, so it’s interesting to think of what may lie ahead, and what amazing structures we may yet discover under the sea on the ocean floor.