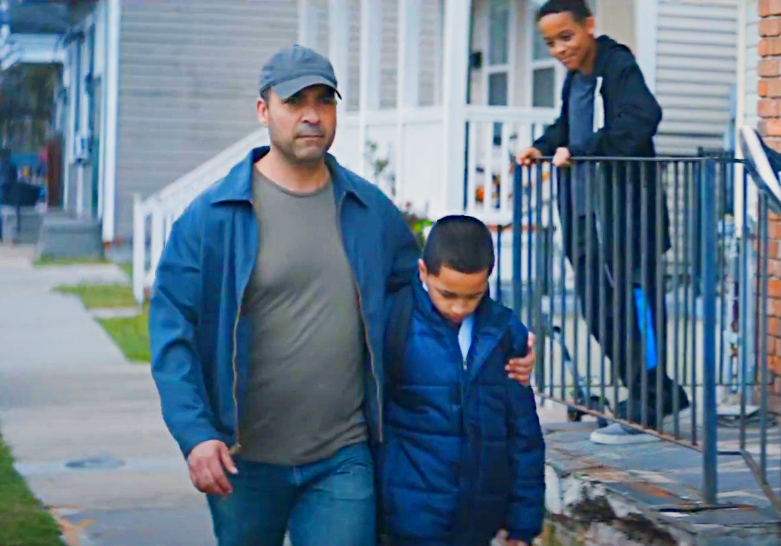 We all know bullying is an epidemic that has spread all over the world and we must admit that it happened a lot back when the word didn’t even exist. Picking up on people without having a reason and dumping all your personal frustrations on them is a common thing we see around us.

One dad, however, wasn’t going to stand for it. He smiled as he zipped up his coat.

The boy’s name is Joey Mason and he was hanging out in the park one day, having fun and playing around with his ball. He was one of the many kids that get bullied at school, but here he was happy. Until a group of teenagers showed up…

Unfortunately, there are many bullies at schools and not many people know how to properly handle this issue. Something had to be done.

He Wasn’t Prepared For It

Joey Mason is a shy fourth grader who loves to play with his dog and cat. Joey lives in Toronto, Canada, in a residential community with a nice park where he is free to play outside. Unfortunately, after school one day, Joey’s outdoor playtime turned into a nightmare for him.

It was pretty evident to everyone who witnessed it that these older boys were up to no good.

“My name is Joey and I’m 10 years old. I am a victim of bullying. It hurts me very much. Please, stop bullying,” wrote Joey on social media. His plea garnered a lot of attention online, but the one person who could help hadn’t seen it.

Joey’s message was read by many, but, unfortunately, his dad knew nothing about it…

Every parent wants nothing but the best for their child and it’s normal to worry about your children if they are in pain. Joey’s dad was no different.

When he noticed that his son was struggling every day he began to grow increasingly worried and alarmed. He tried to find out what was wrong. He tried talking to his son, but he clammed up and refused to tell the truth.

Joey’s dad had noticed that the change in his son had started once he started attending the new school. He could pinpoint the time exactly: this was when he went from being a happy little boy to an emotional wreck.

He began wondering about what was causing it. Could it be the school, or a teacher, or even another child?

Something Was Very Wrong

Every day after school, Joey’s dad would see his son crying and he knew something was very wrong. He didn’t know Joey for sure that his son was getting bullied. But when he finally got to the bottom of the problem, he couldn’t believe what had been going on.

He had to do something rather sneaky and very underhanded, but he knew it just had to be done.

Being the father that he is, he couldn’t just let his son get sadder and sadder with each passing day. He had enough and decided he was going to be the one to do something about it. The only question was how?

He thought about it for a while. Then he finally came up with the perfect plan.

He thought about it a lot. Then, he came to the conclusion that Joey must be getting bullied by one of his classmates or even by one of his teachers. They had a stable and happy family life back at home, so he knew that couldn’t be the root of his son’s unhappiness. But how could he find out the truth?

One day, he secretly followed his son to the local park after school… and then all hell broke loose.

A ‘Nice’ Day At The Park

After school that fateful day, Joey’s outdoor playtime turned into a nightmare for him. Why? Because of the bullies. He was busy playing with his ball, but then they approached him…

Little did they know, someone was waiting and watching their every move.

For some reason, a group of teens had recently turned their eyes to him that spring. For weeks, it seemed that every time and everywhere Joey went before and after school, they were there to bully him. But Joey was a tough kid and didn’t let the name-calling get to him. That was, until one day, the bullying took a scary turn.

Today, it wouldn’t just be name-calling or pointing…

Joey was an innocent boy who was not troubling anyone, so why was he always attacked and bullied by these teenagers? To the other people present there, it would appear as though they knew Joey as they directly approached him.

Things were about to get ugly, and Joey was in trouble, but the commotion the teenagers made drew the attention of someone else…

Will Someone Help Out?

At school, Joey couldn’t defend himself. Most kids would be afraid to step up, and sometimes teachers were oblivious to this problem, thinking they’re just being “kids” and all just fooling around. And now, the nasty teens had him cornered.

But someone at the park sees what’s happening! Will they help Joey out?

The teenage boys were having some fun, stealing Joey’s ball and not giving it back. But we all know that things can escalate pretty fast if nobody intervenes.

From afar, seeing the older boys passing Joey’s ball to each other didn’t seem wrong. To onlookers, it probably looked like they knew him because they went directly to him. But their demeanor, though friendly on the surface, hid some dark undertones that would soon reveal the teens’ true nature.

It Was Going To Get Ugly

“Hey kid,” one of the teens said. “Nice ball you got there. Can I see it?” But before Joey could react, the teen kicked the ball away from him. “It’s mine!” he protested, to no avail. “Come on, just give it to me, man. It’s just a ball,” the teen continued.

Little did he know, he was being watched.

While the interaction between the teens and Joey was occurring, a man was taking notice. He was hidden just out of sight. But as the teasing escalated, he turned his attention toward the four boys. At one point, the older teen kicked the ball away to the other side of the footpath. That’s when the man decided to act.

And the mean boys had no idea that he was Joey’s dad.

He Approached The Boys

“Gentlemen, what exactly do you think you are you doing?” asked Joey’s dad, in an extremely scolding tone.

Joey was trying to get his ball back, and then the teenagers were left speechless for a few seconds, not knowing what to say. But then, they grew emboldened. They tried to fleece him.

The teenagers innocently said: “Just playing ball, sir,” hoping they would fool the dad and be left alone. But this guy wasn’t buying it.

Making Things Clear For Them

One of the teens said “No,” and then the man turned to the other teenagers, asking some more questions.

“Why didn’t you guys stop him? You guys wanna be part of this?” – asked the man, angry that he was a witness to this, but glad to be there and help out his son. He turned to Joey and asked him if he was ok, giving back his ball.

Then, he turned to the teenagers and told them to find another place and leave the kid alone. But this story is far from being over, and you’ll see why…

An Ace Up Their Sleeve

A few days after the incident, Joey’s dad decided to walk his son to school. But this time, the father-and-son team had an ace up their sleeve.

He made sure to walk by the spot where the bullies waited for Joey every morning. He was ready to serve them sweet, sweet justice. He wanted to make sure they never picked on anyone again.

Joey walked ahead while his dad hung back. And, sure enough, the teens were loitering on their usual street corner. They recognized Joey immediately, and then the namecalling began.

But this time, Joey’s dad was ready. He strode up and shouted “Hey!” to get their attention. Then, he smiled as he unzipped his coat.

A Flash Of White

The teens’ jaws fell as they saw the white uniform, then they began to scrabble. “I thought so!” Joey’s dad yelled as they ran away. Tightening his black belt, he grinned, satisfied.

He’d found his old Judo uniform and hidden it under his coat to give the bullies the fright of their lives!

Many celebrities have spoken up and supported people like Joey. Bullying is not something we want to see, no matter what! So that’s why many people have started to speak up about this issue.

A Heartbreaking Message from Keaton

In December of 2017, a video went viral in which a young boy named Keaton Jones tearfully talked about being bullied. The video elicited countless reactions and sparked a national conversation about bullying.

These events inspired Bandeira too, who decided to conduct his own social experiment on the issue of bullying.

I Promise It Gets Better

Plenty of public figures turned out on Twitter to show their support for Keaton. Out of all the attention Keaton got for the video, nothing was as heartwarming as the response from celebrities. Chris Evans, known for his role as Captain America, put his massive heart on display for Keaton and his family.

Chris felt for Keaton, urging that he “stay strong,” and even offering Keaton an invite to the new Avengers movie premiere next year. He wasn’t the only one to support Jones, either.

What Would You Do?

Would you stand up for someone that was being bullied?

Would you have done the same or let the kid handle the situation by himself?

We think bullying is wrong and it shouldn’t ever happen, no matter the age, the reason, or the medium.

It makes others feel bad about themselves and it also negatively influences people’s lives!

Raising Awareness And Reacting to Bullying

What this story has taught us all is that bullying is wrong, and the right reaction is to use logic and make the bullies ask themselves what would they do if they were the ones bullied.

Acknowledging this is one step closer to making bullying history in our society.

With the emergence of social media, online bullying has tremendously increased.

And it made many students that were bullied, not just in real life but also online, even consider self-harm!

Save A Life, Be Kind To Others

We can all save a life by being kind to people and by stepping up when we see them being harassed.

And always remember, don’t do unto others what you wouldn’t want done to yourself — this applies to bullying as well!