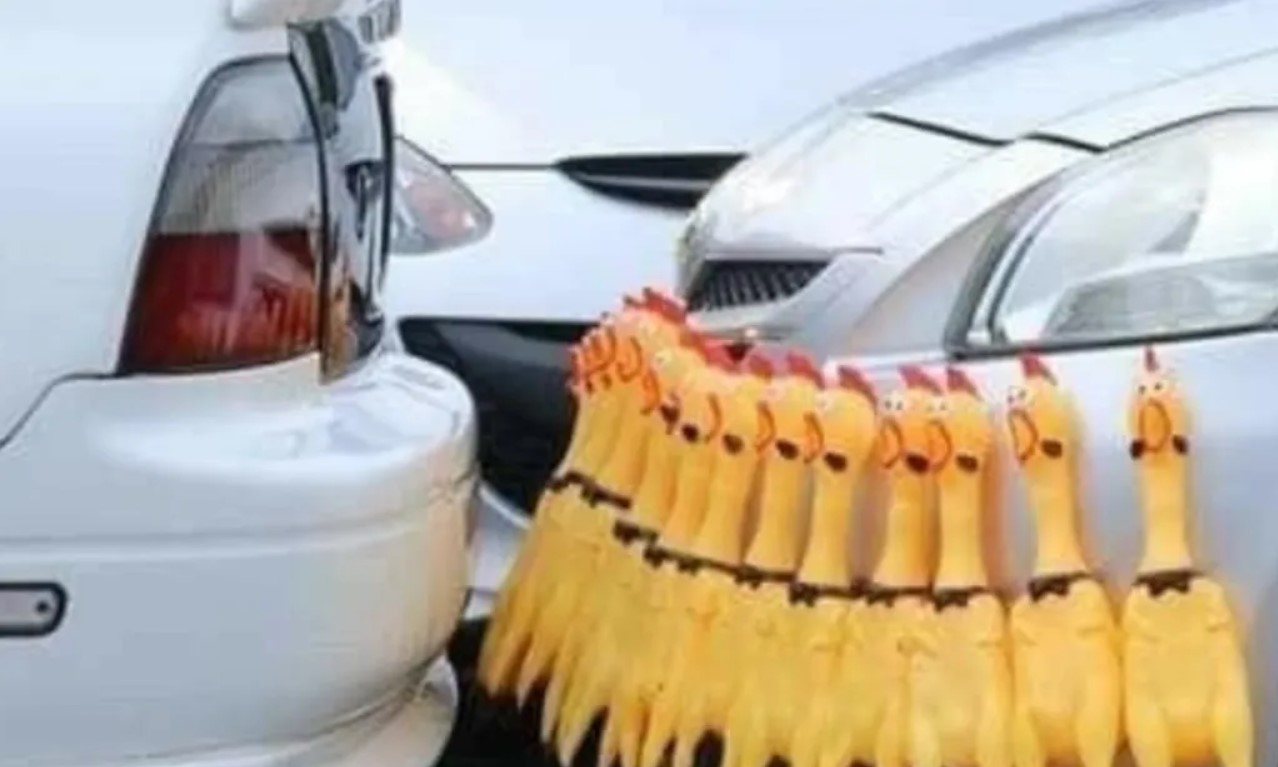 Here are some photos that’ll brighten your day after it hasn’t shaped up the way you hoped. From incorrect spelling on signs to things that just don’t make sense.

Here are some photos that’ll leave you with a smile on your face. 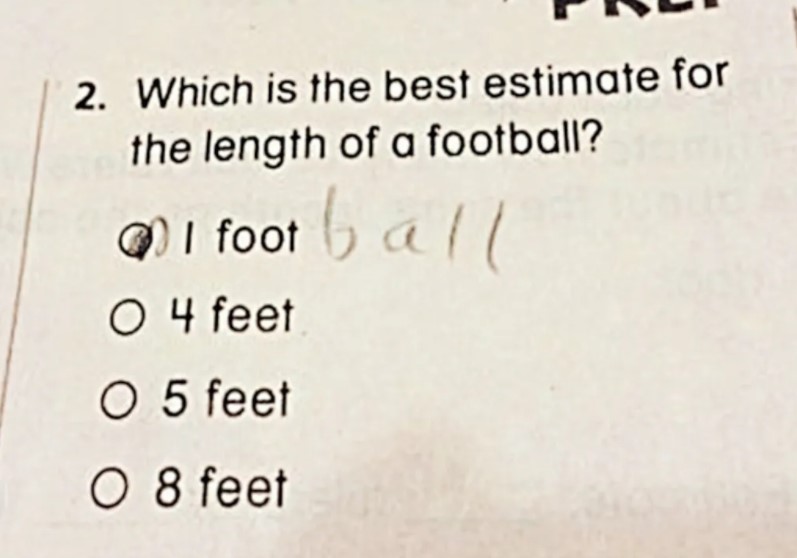 There’s really no arguing with this child’s logic. One can only hope the teacher had a sense of humor and gave them a point for this answer (maybe even going as far as calling it a cheeky correction). 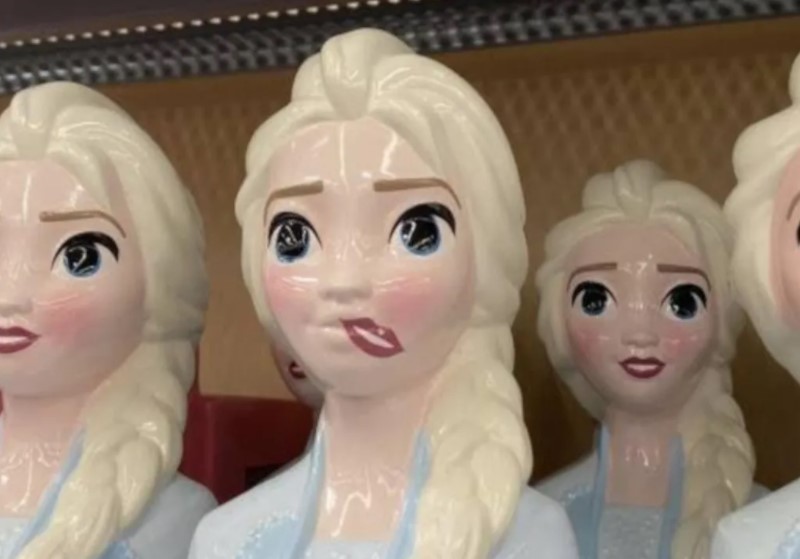 Mass produced items will have the occasional flaw.

But poor Elsa’s crooked lips make her look like she’s displeased with the mistake as well. Either that or she’s sick of hearing her own song played over and over again. At least the eyes went on properly. Otherwise, the figure would have been the stuff of nightmares. 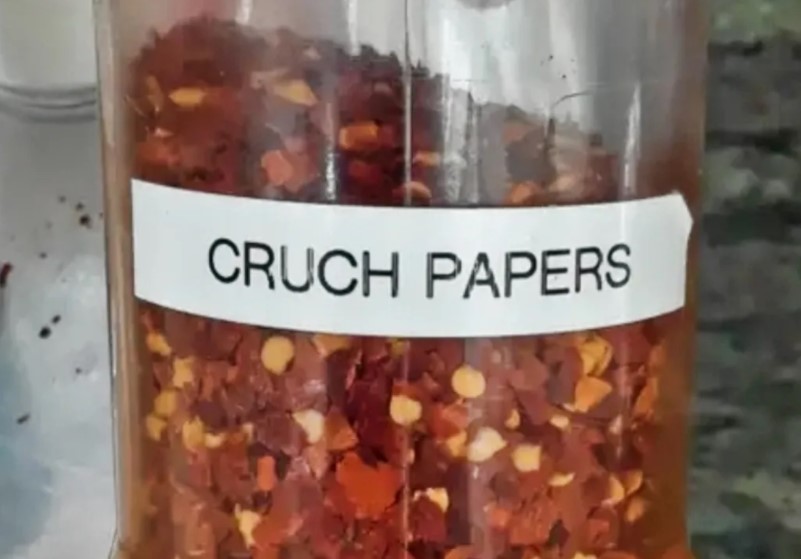 On one hand, it’s a totally appropriate label.

On the other hand … it’s like the perfect gag for anyone who doesn’t know their spices and decides to add a bit of crunch to their meal. Hopefully they’re not too spicy. You can be though that some people are going to go home right now and relabel their pepper flakes. 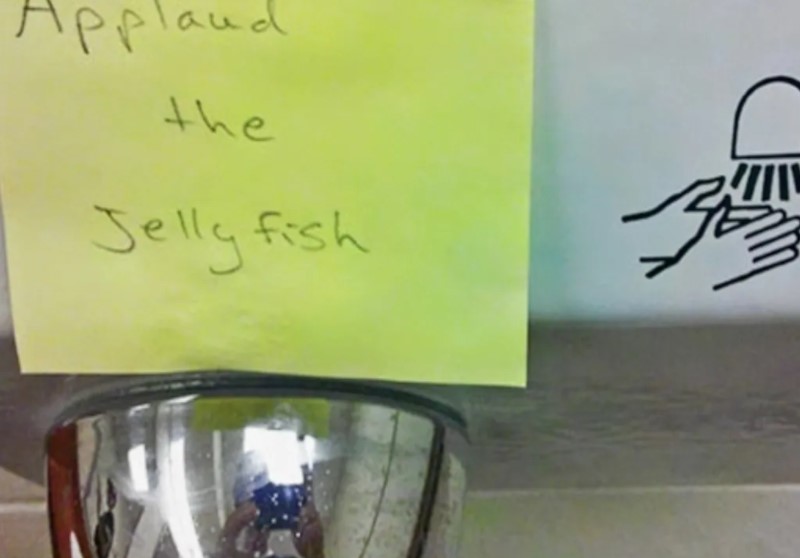 Well done to this person!

People are so used to seeing images or info icons in a certain way. But once in a while, some fresh, smart-alek eyes come along and burn a new images into everyone’s minds. So… YAY TO THE JELLYFISH!

However, as far as spelling mistakes go, this one is cute and giggle-worthy. Most people have seen the disasters that appear when someone feeds text into Google translate without doublechecking. The best ones are usually menu translations. This pic raises so many questions.

First, how does someone nearly trip over a beaver? Second, who looks more surprised? Money is on the little animal and the priceless look on his face that just screams, “OMG, how did you not see me?!” Kudos to the person who saw the funny relationship between his toys and pet. If you think about it, the image is all the more impressive since someone got a cat to sit still for more than three seconds before it wandered off – because kitties listen to no one. 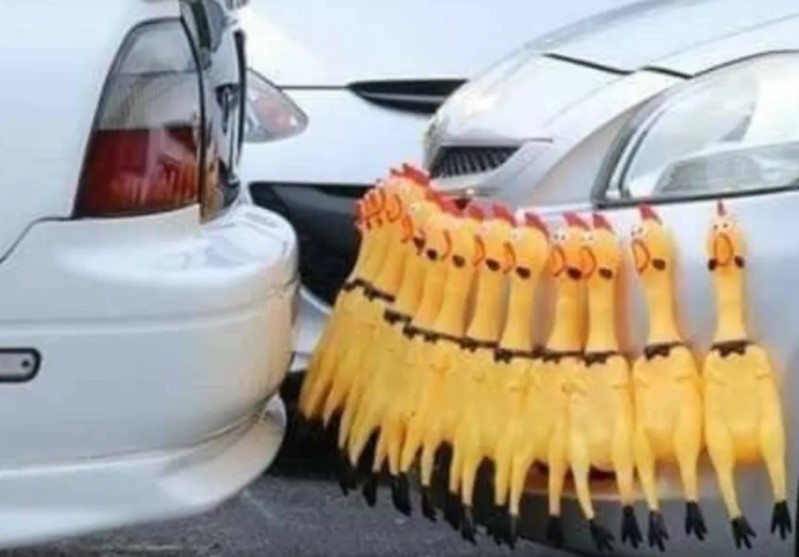 There was a video about a guy who altered his car horn.

He made a normal one for emergencies, but added a lighter “chirp” as a way to get people’s attention without offending them. These chickens, however, are on a whole new level. Anyone else want to rush home and try this? It might take a minute to get this one.

It’s one of those “perfectly timed” photos that you really can’t stage. Which cartoon style do you think his shadow is from? It’s almost a bit of Simpsons mixed with a dash of Bob’s Burgers. 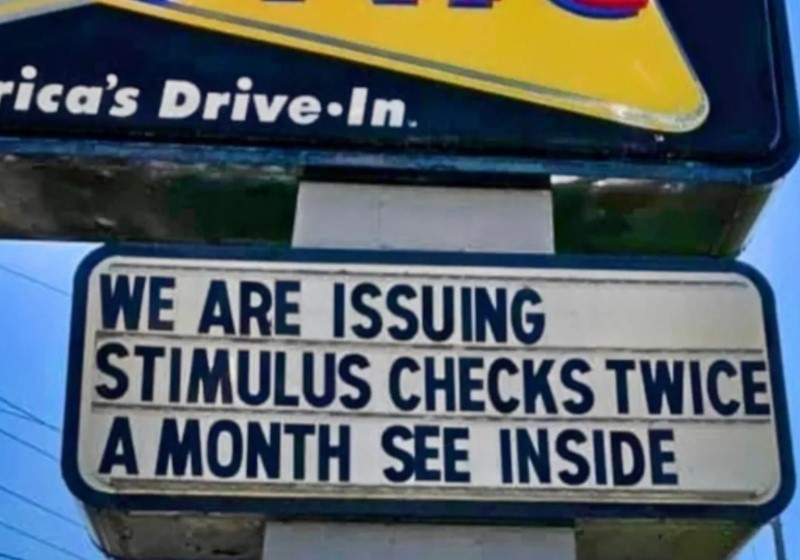 (First place being those wonderful menu mis-translations). But it’s not always a mistake. Sometimes a clever employee knows the best way to stick a memory in someone’s mind is through humor. 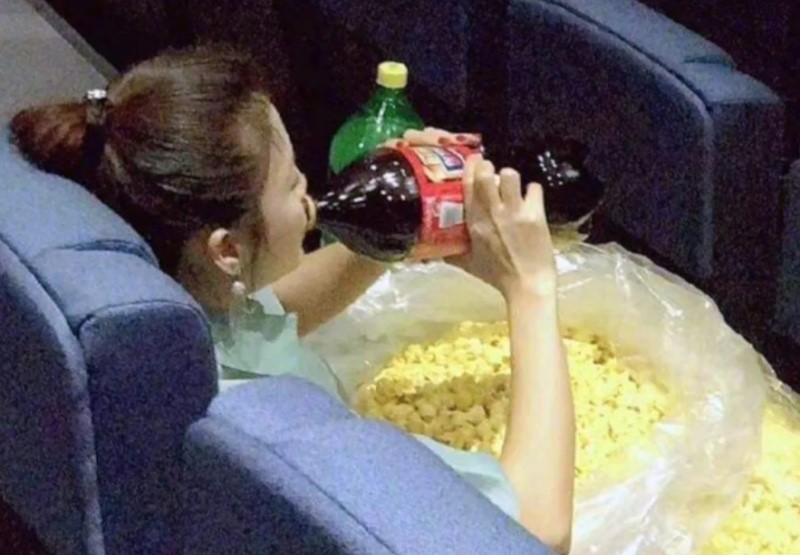 How … how is this possible?!

Most people can’t sneak a chocolate bar in their purse into cinemas, let alone a ginormous popcorn bag and liter bottles of soda. Let’s hope she at least had people there to share it with – it looks yummy. All we can be sure about is that Alan will be hence forth called 4lan. We’ve got to wonder if he gave up filling out the form or just embrace the chaos. 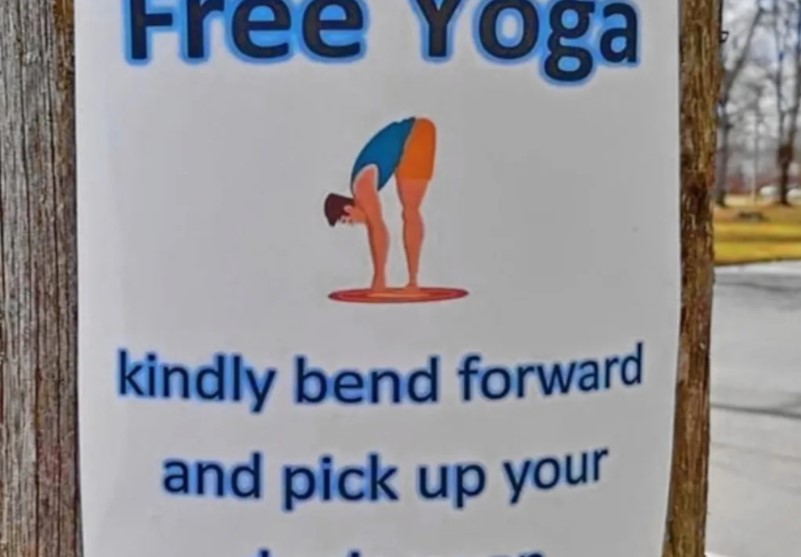 Get that daily, dog yoga in! Don’t forget those little “yoga bags” to collect the downward dog sun offerings … or whatever they are called. But the area must have had a problem for these signs to pop up. 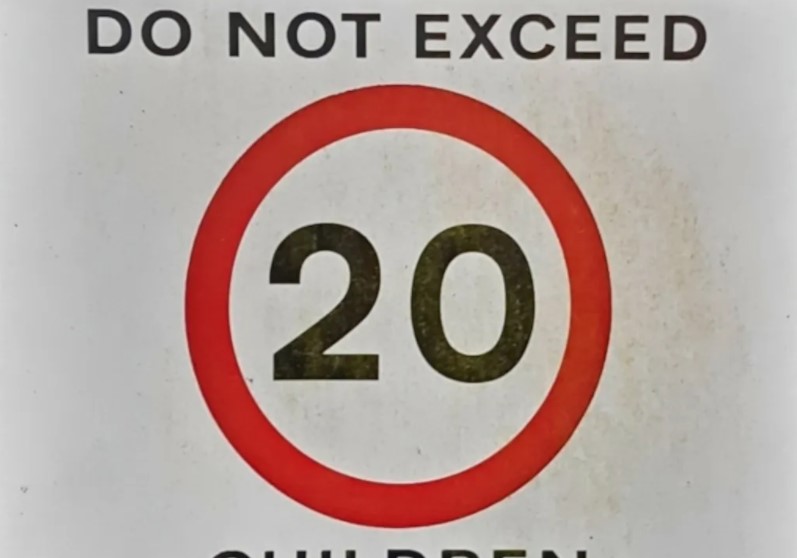 Clearly this limit was set before COVID rules popped up (insert groaning laugh here). You know the “dashes” around children are meant to separate it, but seriously, who pays attention to that? 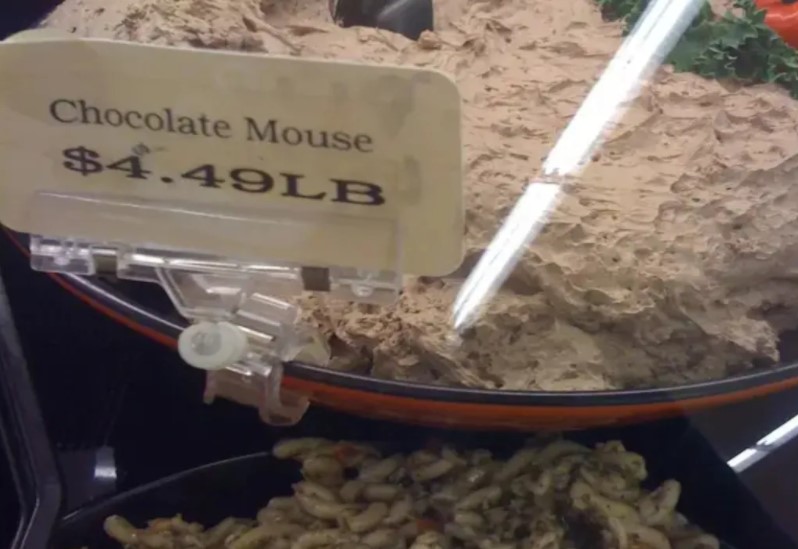 It’s not just the misspelling of mousse.

It’s the fact that chocolate mousse is sitting right next to some pasta salad! You KNOW some messy scooper is going to cause some fairly nasty cross-contamination. Ew. Fix both of those mistakes right now!