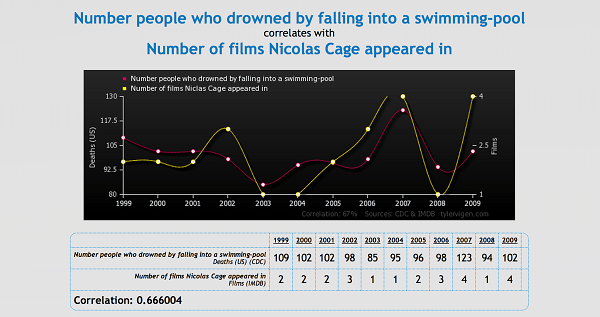 Numbers don’t lie, but the people that use them do.  Sometimes, numbers are presented in sneaky ways to deceive people.  Shocking, but true.  Here are 5 ways that you can be mislead by others with graphics.  Keep these tips in mind – along with the intent of the party that is presenting the data – the next time you look at a graph.

… Obviously, we’re not suggesting you actually use any of these tips to present data because that would be unethical!  Keep them in mind when you’re looking at data, so that you don’t become the victim.

1 – Use broken scales to exaggerate drama, even if there isn’t any. 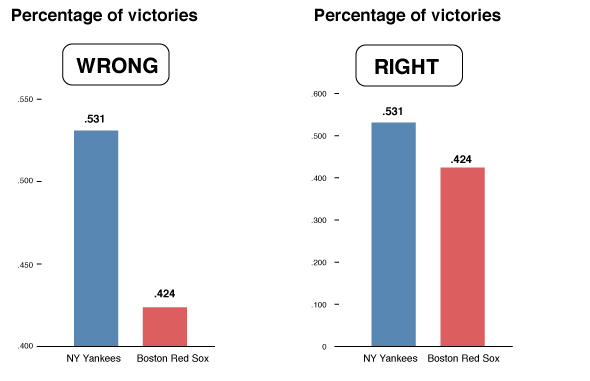 Looks like the Yankees are killing it (graph above).  On quick glance, the graphic on the left  implies that they’re winning three or four time as many games as the Red Sox.  But upon further inspection, once the scale is adjusted, we see the difference more like 11%. 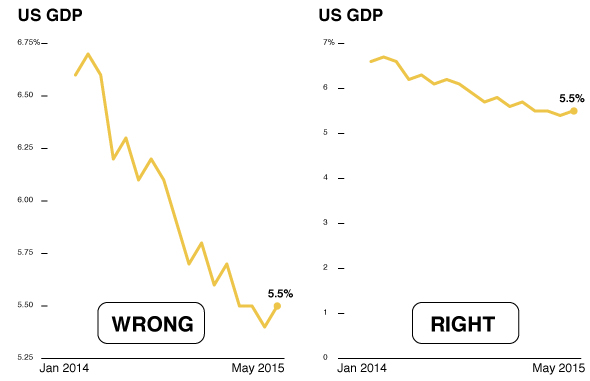 A quick glance at the US GDP graph above – perhaps as it flashes by you on television – and one wouldn’t be at fault for thinking the US GDP is tanking.  But when the scale is adjusted, we see a significant difference with the shape of the line.  It’s still declining, but not nearly as dramatically.

This tactic is commonly used by climate change deniers.

2 – Don’t normalize your data so that it’s impossible to compare. 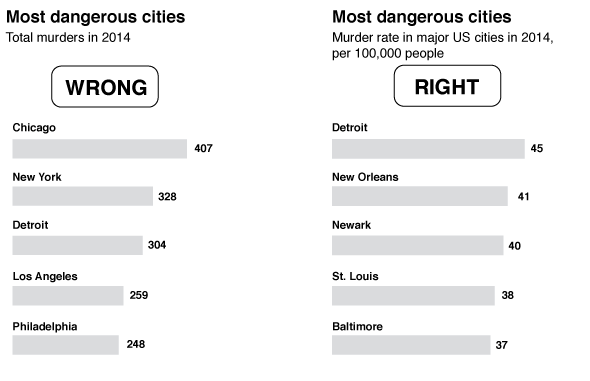 In the graph above, Chicago and New York suffered more murders in 2014 than Detroit, but that doesn’t necessarily mean they’re more dangerous. Obviously, if there’s a greater population, you’ll have more… of anything (including murders).  So how can you tell which city is actually most dangerous?  Normalize the data, and present it as such.  If you take into account how many people live in each city, the comparison changes greatly when you look at the murder rate per 100,000 people living in each city.

3 – Use artistic, skewed graphics to demonstrate your data.

In the chart on the left, the percentage of Christians is the biggest value at 31.4%, but a larger amount of green shows for Muslims because of the 3-D effect of the pie chart.  Firstly, this gives the wrong impression of the data to viewers.  Secondly, 3-D pie charts are horrible and almost as bad as clip-art.  Don’t use them.

4 – Show data on two different scales so that you’re comparing apples to oranges. 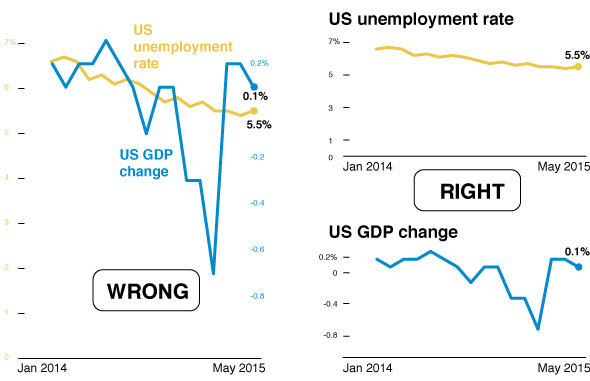 Is 170 pounds more or less than 5 feet 8 inches? The question has no answer because we’re talking about two unrelated units, although they speak about related fields. Still, many charts draw these kind of correlations. Looking at the chart on the left could make you think U.S. gross domestic product (GDP) surpassed the unemployment rate around March 2015. But that comparison is meaningless.

This lie is usually unintentional. Many people just want to include all their information in less space, but the results still draw conclusions that simply aren’t true. 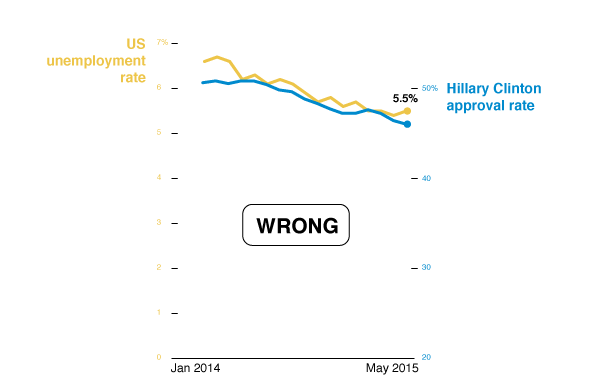 Correlation does not imply causation – most people know this.  But it’s very tempting to make a conclusion based on numbers/graphs that follow a similar pattern.  Here’s another example:

The aforementioned example (taken from Wikipedia) fails to recognize the importance of time and temperature in relationship to ice cream sales. Ice cream is sold during the hot summer months at a much greater rate than during colder times, and it is during these hot summer months that people are more likely to engage in activities involving water, such as swimming. The increased drowning deaths are simply caused by more exposure to water-based activities, not ice cream. The stated conclusion is false.

Here’s another example where correlation definitely does not imply causation.  Or maybe it does…  after all, it is Nicolas Cage.