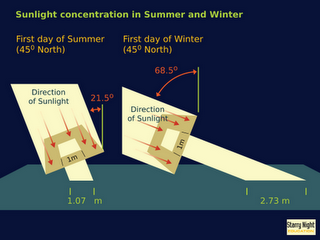 What makes the seasons change and how do they work?  With September upon us, the days are getting noticeably shorter, the nights cooler, and winter is only three short months away.

A common misconception is that we are closest to the Sun in the summer… but this is actually the opposite.  The Earth is at it’s farthest from the Sun on the first day of summer.  So why is it warmer in the summer then?

The elliptical orbit of the Earth around the Sun has little effect on the seasons. Instead, it is the 23.45-degree tilt of the planet’s rotational axis that causes us to have our seasons. This tilt, combined with the Earth’s rotation around the Sun, produces two effects:

1)  A variation in the amount of daylight each hemisphere receives
2)  Seasonal weather (colder in winter, warmer in summer)

Variation in the Amount of Daylight:

By looking at how sunlight is landing on the planet in the diagram below, you will notice two things:

If the Earth was at right angles to the Sun, day and night would always be equal length, and there
would only be one season throughout the whole year.

That huge difference in the amount of sunlight reaching the ground in the different hemispheres also causes the seasonal weather. Note that in the winter, the same amount of sunlight is being delivered by the sun, but it is spread out across a much greater surface, thus having less of a warming effect. The diagram below illustrates this effect.

NASA provides an animation which shows the changing seasons and the effect of seasonal temperatures on the entire Earth:

For additional information, Riverside Scientific Inc. has produced an interactive application which allows students to easily visualize how the seasons work and why they change.  The application, RSI Seasons, is available as a trial on their website.